An Introduction To Art Deco In 12 Works 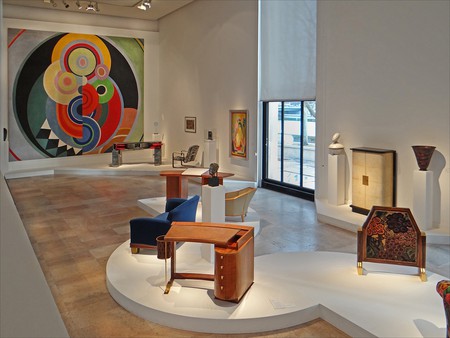 Originating in the 1920s in western Europe and spreading throughout the world, making its way to the US in the 1930s, the art deco style was first exhibited in Paris in 1925. Noted by its clean lines, geometric shapes, along with its more elaborate designs inspired by the East and oftentimes using expensive or luxurious materials. The style spanned across various media from costumes and set designs to paintings, furniture and architecture, among others. Here we take a look at some of the movers and shakers of the art deco style and some of their works.

While Léon Bakst’s works aren’t exactly art deco, they did inspire many artists who were working in the Art Deco style. Bakst was a Russian artist who created paintings, set and costume designs for the Ballet Russes company among others – designs, due to their exotic nature, that would go on to be very influential in the creation of art deco. One such example of Bakst’s designs is the 1910 ballet costume for The Firebird, a colorful outfit with strong Asian influences. 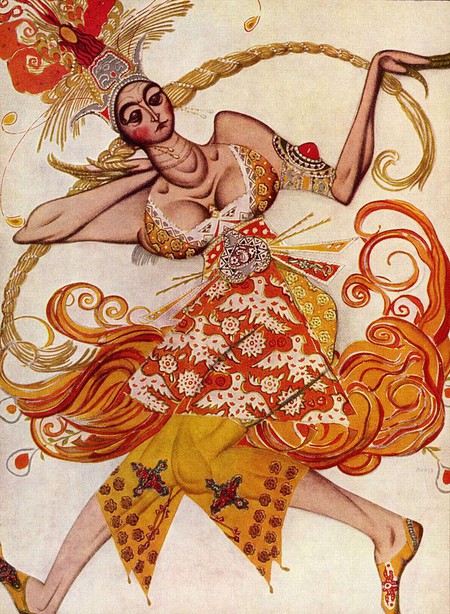 Costume for The Firebird | © Léon Bakst/WikiCommons

Leading a glamorous life, Polish artist Tamara de Lempicka was a leading art deco artist whose work was popular with the elite, including Hollywood stars, socialites, and the aristocracy. Inspired by Cubism, Tamara’s art has a ‘soft cubism’ quality – as described by artist and writer André Lhote – and exudes sensuality. In Auto-Portrait (Tamara in a Green Bugatti), Tamara sits behind the wheel of a green Bugatti while glancing out at the viewer, asserting her independence. Like many of the women she painted, she has a femme fatale quality, with a mysterious allure. This particular work is in a private collection, but you can view a picture of it here.

Born Roman Petrovich Tyrtov in Russia, Erté was a French artist who was known for his art deco designs across a wide range of media from fashion, jewelry, and costumes to graphic art and set designs, including several for the Folie Bergère. Widely regarded as the ‘father of art deco,’ Erté created many memorable pieces of art throughout his career; however, many people would agree that his Symphony in Black is one of his most well-known pieces. This poster features a slender woman dressed in black, including an avant-garde headdress, who is walking an equally slender black dog. The long lines and ornamental touches on the hat, cuffs on the arm, and dog collar all feature art deco stylings.

Located in Millbrook, Jersey, St. Matthew’s Church is also known as the Glass Church due to its incredible glasswork. While many people associate churches with stained-glass windows, this particular gem features the art deco-style glasswork by René Lalique – a French glass and jewelry designer – who was not only known for his organic Art Nouveau designs but also art deco works. Made of ‘heavy, clouded glass,’ these works, which date back to 1934, feature the classic linear details so often found in art deco pieces. What makes this work so unique is that it’s the only surviving work like it by Lalique. 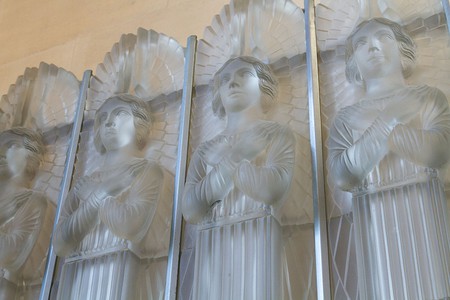 Born in Ireland in 1878 into an aristocratic family, Eileen Gray, according to sources, didn’t necessarily consider herself to be an art deco designer but rather a Modernist one; however, many of her pieces were very much in line with art deco styles of the time, including her lacquered pieces. Indeed, she learned the trade from Seizo Sugawara in the early 1900s, making her ‘the first western practitioner of Japanese lacquer.’ The folding screen pictured below is a great example of some of Gray’s art deco works, which also include other furnishings such as chairs and tables.

Jean Dunand was a genius when it came to lacquered art deco works of art – he also studied under Sugawara – and his La Chasse (The Hunt) could not be a better example of the high French art deco style. At one time adorning the first-class smoking room of the SS Normandie, a French ocean liner whose interior featured a lot of art deco elements, these panels were part of the larger work, Man’s Games and Pleasure, and these particular panels, as the name suggests, depict men outdoor stalking their prey. The colorful panels, with gold, blue, black and pink, are in the collection of the Wolfsonian in Miami Beach. 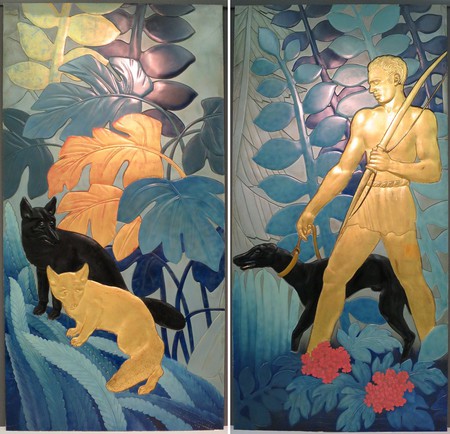 Émile-Jacques Ruhlmann is widely regarded as being one of the main designers who elevated art deco into what it became after World War I. Tired of the Art Nouveau style, Ruhlmann turned to luxurious materials, expertly constructing pieces adorned with impeccably designed ornamentation. The three tapered-legged mahogany corner cabinet shown below is an excellent example of this with its kingwood veneer and ivory inlay. Made in Paris in 1923, it now resides in the collection of the Brooklyn Museum. 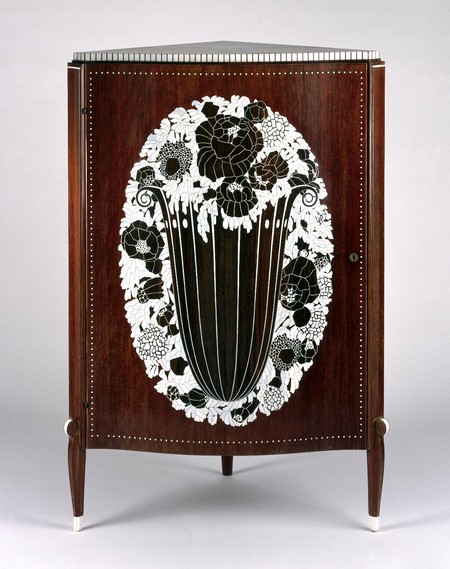 Sonia Delaunay, along with her husband Robert, co-founded the offshoot movement of Cubism called Orphism. Geometric and abstract designs imbued with some of the brightest colors around created her vibrant artworks, such as the incredible Rythme, of which there are many paintings of the same name. Her work inspired her to create textiles in the same brilliant colors and various abstract shapes, very popular during the art deco era, which also led her to design many great interiors.

Art deco spread all over the world including Japan. Just like in Europe, the art deco style could be found in buildings, decorations, clothing, and even lifestyles, which can be seen in the poster, Tipsy. A woodcut print created by Kobayakawa Kiyoshi in 1930, Tipsy depicts a modern, independent Japanese woman against a red background with her exotic red lips, short bob haircut, which was all the rage during that time, holding a cigarette in her hand with a drink before her – she was enjoying the nightlife. 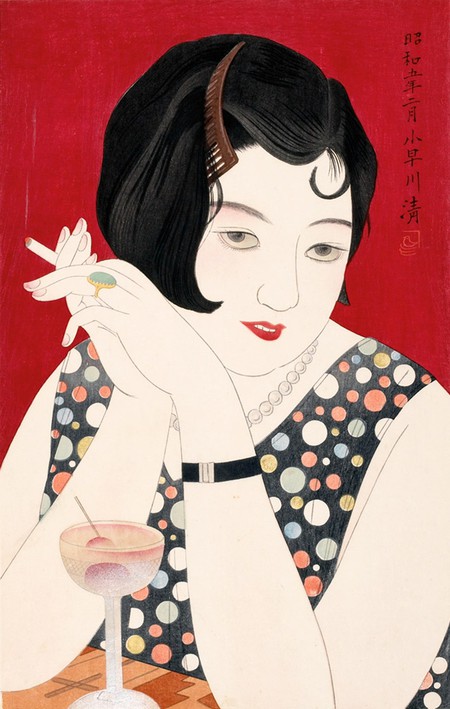 While you may not be familiar with the name Hildreth Meière – The Atlantic described her as ‘a virtually forgotten artist’ – you most likely have seen her work, especially in New York City. For instance, she designed the clerestory windows in St. Bartholomew’s Church on Park Avenue – vibrant stained-glass windows with a lot of blues and purples – three allegorical roundels known as Dance, Drama, and Song adorning the façade of Radio City Music Hall, along with various other murals and mosaics dotted throughout the city. To see the enamel and metal roundels, including the one below, visit Radio City Music Hall on 50th Street. 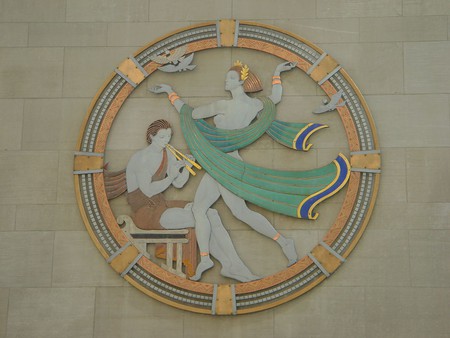 The Jazz Age, flappers, Folies Bergère – all of these words accurately describe much of Demetre Chiparus’ art deco sculptures. Born in Dorohoi, Romania, Chiparus lived in Paris and was inspired by the Ballets Russes, French theater and ancient Egyptian art. In Tanara, of which there are many versions, he depicted a ballet dancer dressed in a beautiful exotic costume, including headwear, who is sitting on the floor fiddling with one of her ballet shoes. The exotic, the lines, the use of luxurious materials like ivory all speak to the art deco style. 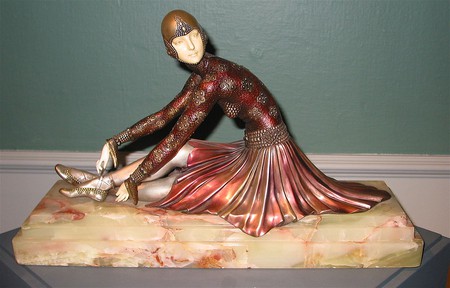 The world is graced with many incredible art deco buildings. One iconic masterpiece is New York City’s Empire State Building, constructed in the year 1930-31, with its opening on May 1, 1931. Designed by William F. Lamb of Shreve, Lamb and Harmon, the art deco architectural gem features 102 floors along with a 203-foot pinnacle and a ‘modernistic’ exterior, complete with two stainless steel canopies at the entrance. A National Historic Landmark since 1986, the Empire State Building can be explored by visitors, complete with exhibits and observations decks. 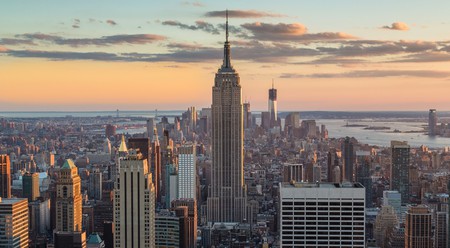