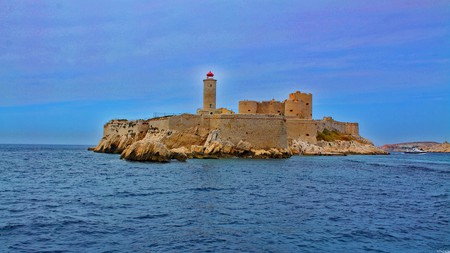 Château d’If is an old island prison off the coast of Marseille. It was made legendary by Alexandre Dumas in his classic novel, The Count of Monte Cristo. It’s where his hero was wrongly imprisoned for years. Here’s our guide to the history behind this amazing monument, how to get there and what to do.

The island of If is a very small island – only three hectares in size. It’s part of a small archipelago that includes the larger island of Frioul, which is a wonderful nature reserve and home to a little fishing community. 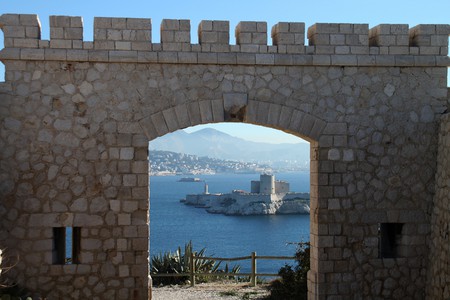 The fortress is the only thing that has ever been built on the island of If. King Francis visited the island in 1516 and realised that it was an ideal place to build a fort to protect Marseille from an attack.

Construction began in 1524 and finished in 1531. It has three storeys, built in the shape of a square (28 metres long) protected by towers, with cover for archers and guns.

It looks imposing and acted as a deterrent, but it never actually had to play a part in defending Marseille against a military attack – which is probably a good thing. The fort wasn’t well-designed; it was built with a lot of mistakes and might have been easy to capture and/or destroy.

By the 1800s, it was clear that there wasn’t a military role for the fortress to play in defending France. It was an ideal place to use as a prison though, primarily because of the fact it was an island and difficult to escape from. There are fast currents that run through the surrounding waters, which acted as a deterrent, very similar to the island prison of Alcatraz, in San Francisco.

Throughout the 1800s, until the prison’s closure in 1890, thousands of political prisoners were housed here. In keeping with the time, poorer prisoners were kept in the worst conditions – in dungeons on the lower floor, full of people, hunger and disease – whilst the richer prisoners were allowed to pay for better cells on the upper floors, complete with fireplaces and proper beds. 3,500 French Protestants were put in prison here, as well as several political prisoners. Their etchings on the bricks can still be seen today.

Napoleon also kept the body of Republican Jean-Baptiste Kléber at the Château for many years, after his assassination in Cairo, because he was afraid that giving Kléber a martyr’s funeral would undermine his own power.

But perhaps the castle is most well-known for its literary role in Dumas’ classic, The Count of Monte Cristo. It was published in the 1840s and was an instant bestseller. It tells the story of young Frenchman, Edmond Dantès, who is on course to marry his true love and live happily ever after. But he’s betrayed by two men and imprisoned on If for 14 years, before he makes a daring escape. He goes in search of some treasure he has heard about, and gets his revenge on the two men.

It’s still a hugely popular book, discussing how life can change for the worse at a moment’s notice: “On what slender threads do life and fortune hang!” In real life, no one is ever known to have successfully escaped from the prison.

Take the time to visit both Château d’If and the neighbouring island of Frioul in the same day. Either take a picnic or eat at one of the harbour restaurants in Frioul. The paths and stone can be hard-going on the feet, so take practical footwear and lots of water in summer. You can swim on the island of Frioul, so don’t forget your towels, swimwear and suncream.

How to get there: Ferries leave from the Old Port in Marseille to the island of Frioul, stopping at Château d’If on the way. Not all the ferries stop at the fortress so make sure you check beforehand.

Opening hours: Tuesday to Sunday, 10am to 5pm (6pm from April to October). Closed Mondays.