11 Movies for Wine Lovers from Around the World

It’s not hard to see why filmmakers are drawn to making movies about the good stuff. Wine not only tastes great, it comes from great places: picture-postcard vineyards and rolling hills, all set to the backdrop of beautiful sunsets.

It’s the elixir for all sorts of life experiences: romantic evenings accompanied by a bottle or two of Merlot or a night spent hatching grand plans. Over the years, movie-makers have continued to incorporate wine into their masterpieces, with the beverage taking centre stage in a wide range of films across genres. Here are 11 movies perfect for wine lovers. Salud! 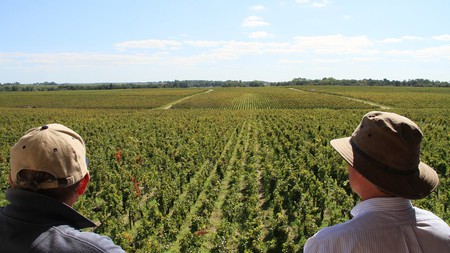 Over the last few years a new customer has entered the wine market: China. The country not only produces a lot of wine and owns a lot of vineyards, its citizens have grown to love it too, with the Chinese set to be the second biggest wine consumer by 2020. This is the focus of Red Obsession, a 2013 documentary that charts China’s burgeoning appetite for wine, particularly that from Bordeaux. The documentary tracks a period of great change for the global wine industry as China emerges as a dominant player, unsettling the established authorities that have enjoyed dominance for decades. Fun fact: Red Obsession is narrated by Russell Crowe.

Russell Crowe once decided to do a movie about wine. And while the critics didn’t think much of it, the 2006 film A Good Year, directed by Ridley Scott, is actually worth a watch. Crowe is Max Skinner, a British investment banker who, as you might have guessed from that job title, isn’t all that nice of a person. But a trip to a Provence vineyard changes all that. Following his uncle’s death, Skinner inherits the deceased’s French winery, a place where the young Max spent happy childhood times. As a hard-nosed, financially-savvy adult, Skinner wants to sell the property as quickly as possible, so skips over to Provence to do just that. But as he sets about renovating the estate, something happens: Skinner sees a new beauty in the pace of life in Provence and in the people he meets. All of a sudden his city slicker lifestyle doesn’t seem all that great. Will Skinner do a quick sale, or could he be in this for the long term? 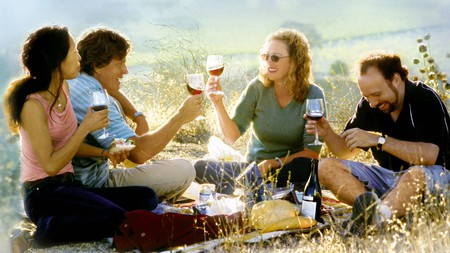 Alexander Payne’s 2004 outing Sideways was something of a smash hit and is probably the best known wine movie there is. This comedy-drama road movie sees pals Jack (a fading actor) and Miles (a struggling writer) head to Wine Country in sumptuous California ahead of Jack’s impending wedding. Much of the fun is to be found in Jack and Miles’ odd relationship – Miles is the studious wine connoisseur, while Jack’s the, well, Jack-the-lad. But it’s not all fun and jolly japes – for all the laughs you’ll have, Sideways is also a careful study of friendships, midlife crises, depression, love and, yes, the dangers of drinking that little bit too much.

If Sideways inspires you to take a trip to one of the world’s great wine regions, use this new resource from Expedia to help plan it.

And now for something a little different. While Sideways shines a somewhat rose-tinted look at wine, the 2004 documentary Mondovino, directed by Jonathan Nossiter, goes somewhere completely different. Over the past few decades the world has seen the decline of industrialisation and the growth of globalisation, a change that has impacted all aspects of the world, including the wine industry. By visiting vineyards in France, California, Italy and New York, Nossiter’s film looks at what ‘going global’ really means for the international wine trade, with deforestation and political tensions between big businesses and independent companies emerging as key themes. While it requires some determination on the part of the viewer – the documentary is more than two hours long and consists mostly of hand-held interviews with people from the wine trade – Mondovino makes for a rewarding, refreshing watch. 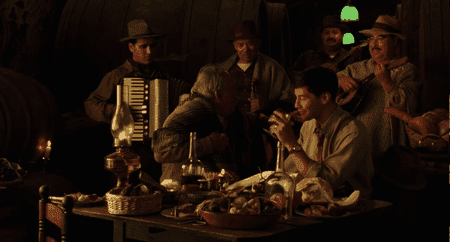 Keanu Reeves in A Walk in the Clouds | © 20th Century Fox

This 1995 romantic drama starring a fresh-faced, pre-Matrix Keanu Reeves is regarded by some as one of the best wine movies ever made. A Walk in the Clouds is set in Napa Valley, California, shortly after the end of World War II. It sees soldier Paul Sutton (Reeves) return home to his wife, Betty, as he tries to forget the horrors of war. But his marriage to Betty becomes increasingly strained… So, where does the wine come in? Well, with his marriage collapsing, Paul heads off to Sacramento in search of work, only to meet Victoria, a graduate student whose family owns a vineyard in Napa County. Learning that Victoria is pregnant by her university professor, Paul offers to pose as her husband in order to stave off her domineering, old-world father’s anger. We won’t spoil the rest of A Walk in the Clouds too much, but suffice to say, if you like love stories, Keanu Reeves, family drama and the beautiful Napa Valley, this is the film for you to enjoy a bottle with. 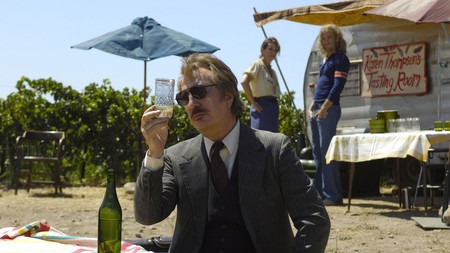 If you’ve ever had Netflix, you might have seen the 2008 comedy-drama Bottle Shock pop up on your list of suggested watches. If you didn’t give it a go, you should have done, for it’s a delicious romp through the story of California wine-making in the 1970s. Bottle Shock is based on ‘The Judgment of Paris’, a now infamous wine tasting event that took place in 1976, sending ruptures through the wine industry because French wines were resoundingly beaten by Californian ones. The event arguably paved the way for today’s global wine market and opened up ‘new world’ wines to drinkers who would previously only consider French ones. Bottle Shock also has a great cast, with Chris Pine, Bill Pullman and the late, great Alan Rickman all making excellent appearances. Not to mention some fantastic scenery.

There’s a lot more to pouring a bottle of wine than corking the bottle and languidly letting the juice drip into a well-proportioned glass with a knowing look on your face, you know. Being a sommelier takes serious craft, care and studious skill, and it’s the focus of Somm, the 2012 documentary that follows four hopeful sommeliers who attempt to pass the Master Sommelier Diploma, a ridiculously difficult wine degree. Since its founding in 1969, only around 240 people have passed the thing! Somm is worth a watch if you’re interested in learning more about wine, but it’s also a fascinating study of the people striving to become a Master Sommelier – their emotions, their hopes and their fears.

This 1992 flick was written by William Goldman, a scriptwriter who has penned a couple of other little-known movies including Butch Cassidy and the Sundance Kid and All the President’s Men. While his Year of the Comet doesn’t quite reach the creative heights of those two, it’s still worth checking out. The film centres on Margaret Harwood (Penelope Ann Miller), a wine taster sent to the Scottish highlands to evaluate a new discovery – a very, very rare bottle of wine bottled during the Great Comet of 1811. Harwood is given a sort-of bodyguard – Oliver Plexico, played by Tim Daly – to accompany her. While the pair are like chalk and cheese, they eventually hit it off in true Hollywood cliché style. But there’s more, too: that bottle of wine is highly prized, and others want it, come hell or high water… 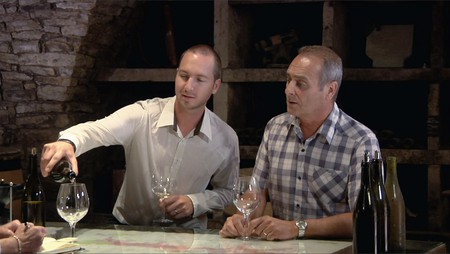 A Year in Burgundy | © Netflix

Years are incredibly important in wine-making as they define the whole process from start to finish, grape to bottle. Hence why so many wine movies have ‘year’ in the title. Here’s another one: A Year in Burgundy, a 2013 outing filmed in one of the most popular wine regions in the world. The documentary follows a group of wine families over the course of, you guessed it, a year, going really in-depth on the multi-layered process that is wine-making. 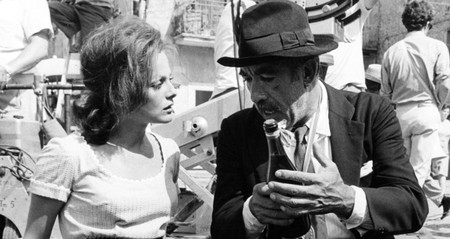 This 1969 war movie was nominated for two Oscars, so we’re cracking open something of a vintage here. The film, starring Anthony Quinn of Lawrence of Arabia fame, is about the inhabitants of an Italian village, Santa Vittoria, helping to hide a million bottles of wine from the Nazis during World War II. Quinn plays an inspirational sergeant major who persuades the villagers to seal up the bottles in an ancient Roman cave, much to the Nazis’ chagrin… 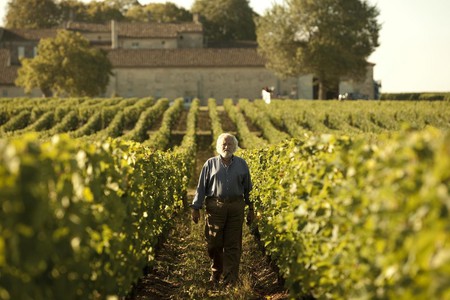 You Will be My Son | © Universal Pictures International

Last but by no means least, 2011 film You Will Be My Son explores a thorny issue in the wine world: inheritance. The movie focuses on Paul de Marseul, a vineyard owner unhappy at the thought of his son, Martin, eventually taking over his winery. Instead he appoints Phillipe, the son of Francois, his vineyard manager. The film is part family drama, part thriller, and should be at the top of your must-watch list.