10 Artworks By Claude Lorrain You Should Know

A detail of The Embarkation of the Queen of Sheba, 1648 | © National Gallery | WikiCommons

Born as Claude Gellée, Claude Lorrain, also known simply as Claude, was a French artist known for his breathtaking poetic landscape paintings often framed by large trees or classical architecture. He spent most of his life creating his artwork in Italy, inspired by its beauty and especially the lush, verdant countryside. His command of light is exquisite, as evident in many of his paintings, and inspired future artists such as the British great, JMW Turner. Take a journey of Claude’s artwork, as we explore 10 of his greatest works.

Landscape with Cattle and Peasants (1629)

Painted in Rome, Italy, Landscape with Cattle and Peasants is Claude’s first dated work and can be seen in the Philadelphia Museum of Art. This piece gives viewers a glimpse into what Claude was so famous for – his beautiful renderings of landscapes. In the foreground stand some peasants and cattle; the land recedes into the background where it’s met with a string of mountains and blue sky dotted with clouds. While the entire painting is lovely, the trees are the main attraction. Full, verdant, leafy trees frame the scene in the foreground, showing viewers that nature is grand.

Claude was also known for his extraordinary use of light, recreating sunlight within his works. The result? Stunning pieces awash with a brilliant glow. One such example is the Harbour Scene at Sunset, painted in 1634 and currently held by the Royal Collection Trust. The incredible harbor scene features hardworking men in the foreground, with grand Roman ruins to the right – a theme Claude visited throughout his career – and ships on the left and in the background. The darkness of the sea contrasts beautifully with the sun-kissed sky. Another thing to note is Claude’s excellent use of perspective, with the viewer’s eye drawn to the sun. 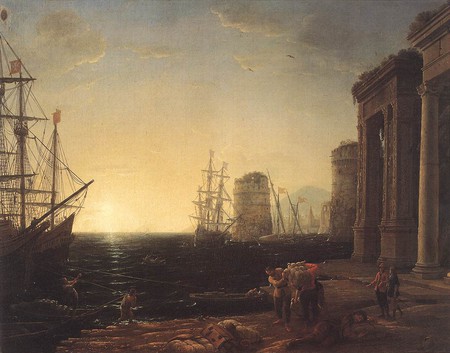 Started between 1635 and 1636, Liber Veritatis was a lifelong work; however, it is not a painting but rather a collection of Claude’s works. Located in the British Museum in London, this is a book containing 195 drawings of the paintings he produced over the years. It is a treasure trove for those wanting to learn more about the artist and his stylistic development throughout his career. Not only was it a way for Claude to keep track of the majority of his works – works before 1635 were not included as there were few before that date – but also, according to sources, ‘as a safeguard against forgery.’

The Trojan Women Setting Fire to Their Fleet (1643)

Depicting a story from Virgil’s Aeneid – Claude did eight paintings from this book – The Trojan Women Setting Fire to Their Fleet is one of the earlier pieces. The mythological rendering is set against a backdrop of the sea, land and cloud-covered sky, with the Trojan women getting ready to destroy their fleet topped with wind-tattered flags. Spending years traveling the sea and elsewhere after the fall of Troy, the women are ready to begin anew in Sicily. Thanks to the above work, we know that this work was painted for Girolamo Farnese in Rome. Today, it can be found at the Metropolitan Museum of Art in New York City. 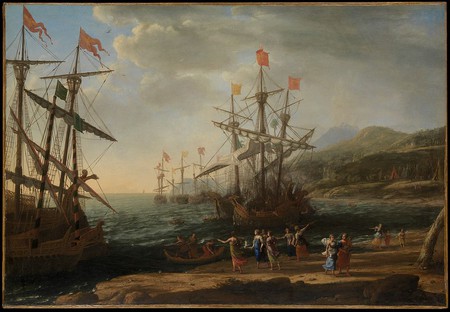 The Embarkation of the Queen of Sheba (1648)

Set in an imaginary seaport with magnificent classical architecture flanking both sides, The Embarkation of the Queen of Sheba depicts a biblical story from the Old Testament, when the Queen of Sheba traveled to Jerusalem to visit King Solomon. Commissioned by Duc de Bouillon, along with The Marriage of Issac and Rebekah (see below), the painting is a strong representation of linear perspective, creating a beautifully rendered three-dimensional scene. As with the Harbour Scene, viewers will also see a slight golden hue blanketing the canvas, provided by the rising sun. View this one in person at the National Gallery in London. 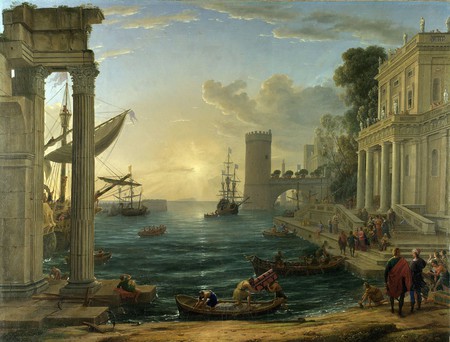 Claude Lorrain, The Embarkation of the Queen of Sheba, 1648 | © National Gallery/WikiCommons

The Marriage of Isaac and Rebekah (1648)

Also known as The Mill, The Marriage of Isaac and Rebekah is based on another biblical story from the Old Testament, but unlike the painting above, this masterpiece is set inland. The right side of the artwork is dominated by large trees with an abundance of foliage, while the left side is overall more open, and a waterway bisects the background in two. While the overall color scheme is dominated by blues and greens, the figures in the foreground are wearing brightly colored garb of red, yellow, blue and orange. Even though it is inspired by a biblical story, the painting reflects just an everyday Arcadian scene of people enjoying themselves. This painting is also found in the National Gallery. 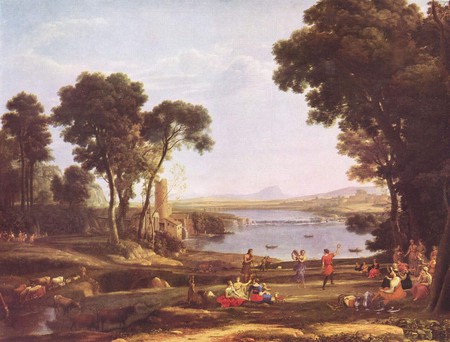 Claude Lorrain, The Marriage of Isaac and Rebekah, 1648 | © National Gallery/WikiCommons

Painted originally for François Bouquet, the Bishop of Montpellier, The Sermon on the Mount can currently be found in The Frick Collection in New York City. As can be seen in the works thus far, Claude’s works are often open in the middle, with trees or architecture framing the sides; however, in this piece, he breaks away from this formula by placing the rocky, tree-covered Mount Tabor – from where Christ preaches – almost directly in the middle of the scene. Viewers will also see Mount Lebanon in the distant, along with the Sea of Galilee, plus the Dead Sea and the River Jordan. While it may be a departure from his traditional landscapes, its beauty radiates.

This 1664 painting depicting a mythological subject is also known as Landscape with Psyche Outside the Palace of Cupid. Located at the National Gallery, The Enchanted Castle was commissioned by Lorenzo Onofrio Colonna, a Roman aristocrat. Psyche pensively sits on the grassy knoll in front of Cupid’s castle. Viewers really have no way of knowing whether this was the moment before she met Cupid or after he leaves her. The water is a sparkling blue, especially toward the back where the sunlight dances on top. Now, compare that to the dark, moody foreground blanketed by a shadow – a splendid contrast of light and dark. 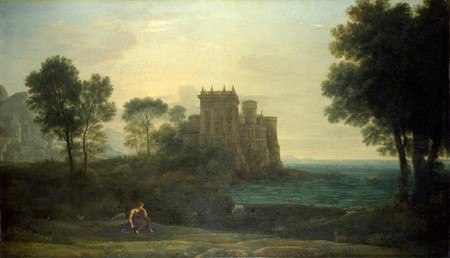 Coast View with Perseus and the Origin of Coral (1674)

Now part of a private collection, Coast View with Perseus and the Origin of Coral was created for Cardinal Camillo Massimi in 1674. Claude created several preparatory studies for this painting, which can be found in museums around the world, including the Musée Bonnet in Bayonne, the British Museum, the Met, and the Louvre in Paris. The version at the Met is believed to be the closest representation of the final painting, which is an exquisite landscape with trees, including a palm tree on the left side and a rock arch dominating the right side. While this is showing an Ovid tale, the figures are so small that they are almost insignificant, as, once again, nature is the star. See the Met version here. 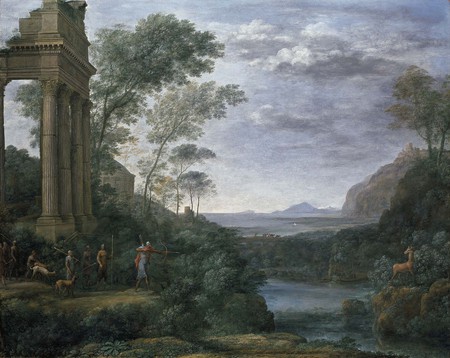 Claude Lorrain, Landscape with Ascanius shooting the Stag of Sylvia, 1682 | © Ashmolean/WikiCommons
Give us feedback