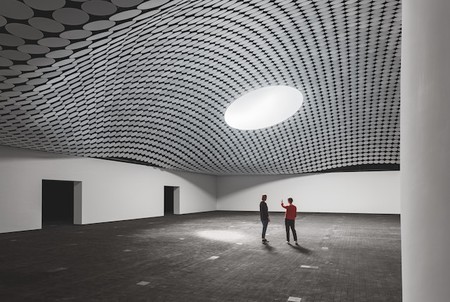 Bubbling up from the surface of a square in downtown Helsinki is the Amos Rex Gallery – a subterranean futuristic world that invites inquisitive passers-by to climb its peaks and peer through its periscope-style skylights, luring them into the cavernous underbelly of the exhibition space below.

This surprising urban playground in the heart of Helsinki is part of the conversion and restoration of one of the city’s key landmarks: a 1930s complex called the Lasipalatsi (“glass palace”), beneath which the 2,200-square-metre (23,700-square-foot) Amos Rex museum lurks. A much-loved meeting point for locals, the Lasipalatsi was deemed the perfect new location for what was then called the Amos Anderson Art Museum, which had outgrown its early-20th-century digs in an old newspaper office nearby.

The complex’s glass-walled pavilion sits in stark contrast to the Romantic 19th-century train station opposite and was a radical design, conceived by a trio of fledgling local architects who were given free rein to create a temporary structure for the impending Olympics in 1952. This striking white beacon, brimming with Streamline Moderne energy, was illuminated by Helsinki’s first-ever neon lights. 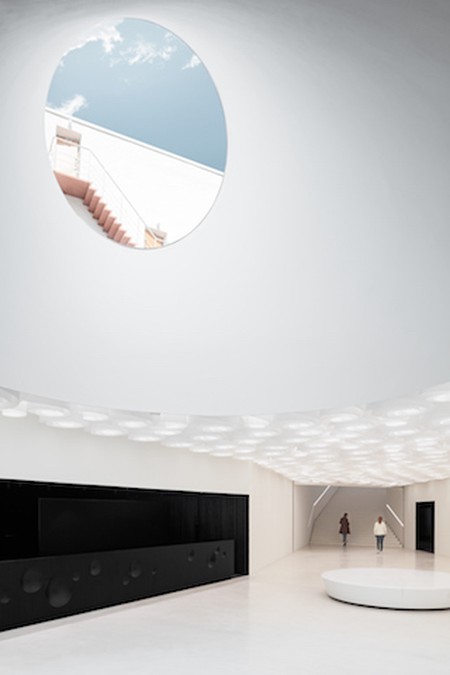 “It was a piece of ‘wow’ architecture when it was built at the time,” says Asmo Jaaksi of JKMM, the local architecture firm that led the €50 million expansion. “Lasipalatsi was brave and groundbreaking, so that was in our minds when we took the project on. We didn’t want to be afraid to do something risky, but we also respected the original building when it came to its transformation – we made changes in a discreet way. Yet there’s a clear contrast between the old and new.”

Delving into the main exhibition space below, visitors are presented with a last look at the undulating landscape of the central square before they take the plunge into the immersive universe created by psychedelic Japanese collective teamLab. The vast dome-topped spaces have been transformed for the museum’s inaugural exhibition, Massless, into an ethereal digital underworld that sucks visitors into a disorienting, hypnotic vortex and invites them to chase creatures in a kaleidoscopic jungle.

“The main idea was to make the exhibition spaces as flexible and adaptable as possible so that we can leave it completely open and uninterrupted,” says museum director Kai Kartio. While currently blacked out for teamLab’s high-tech extravaganza, in the light of day these capacious underground rooms are clad in a sea of discs sweeping across the ceiling, punctuated by porthole skylights that offer a glimpse of the cityscape overhead.

The first floor of Amos Rex offers a true sense of the Lasipalatsi’s Art Deco grandeur. Salmon-pink columns meet air-force-blue and burgundy ceilings, while velvet seating hugs the sweeping spiral staircase. The choice of upholstery alludes to the red-carpet glamour of Bio Rex, the cinema that was refurbished as part of the project. Frothy bubble lights dangle above the abstract-patterned lino floor, which leads into the 590-seat cinema. Here, original saucer-shaped light fittings beam down on the brass-trimmed seats of the theatre, while thick mustard-coloured curtains recall a bygone era. 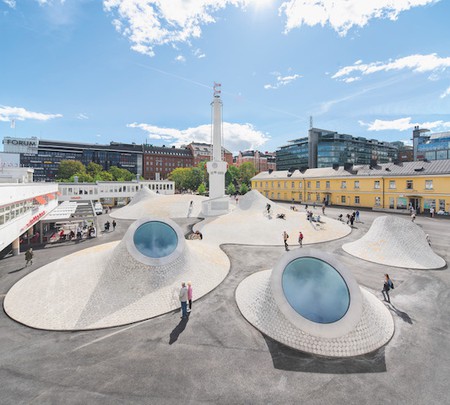 Since Amos Rex opened, visitors have queued around the block, curious to explore what’s hidden beneath the city’s new playground. The museum has garnered plenty of international attention, too; Kartio is pleased to have supported a relatively unknown local architecture firm to do the job, and believes this is just the beginning for both the practice and the city in terms of exposure.

“In a way,” Kartio says, “Amos Rex was the one missing block in the centre of Helsinki that now binds together lots of artistic and cultural institutions. A stone’s throw from Amos Rex there is the Helsinki Art Museum, the contemporary art gallery Kiasma, a new library that’s due to open later this year and a music centre, so it’s a really strong cultural hub. Yet Amos Rex is pretty unique, and the way it’s gained lots of attention means that Helsinki is starting to be discovered on a global scale, when it might have been previously overlooked. Amos Rex is Helsinki’s trump card and has undoubtedly contributed to the rebirth of the Finnish capital as a destination.”