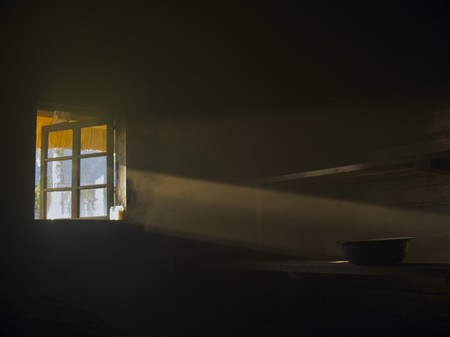 Finland – the curious country of 1000 lakes, steel, forests, Nokia and strong accents. The homeland of Santa Claus, a severe recession and bizarre government. Everyone knows of Finland but do they know the cultural customs of this Northern land? Here, The Culture Trip compiles a list of the quirkiest, most peculiar traditions practiced in Finland.

This fascinating sport where a man quite literally carries his wife through a special competition track filled with set obstacles has been around since the dawn of the 19th century. To honor the tradition, the world championships of Wife-carrying are held yearly in Sonkajärvi – ever since 1992. The winner is determined by which team manages to get through the track in the least amount of time. 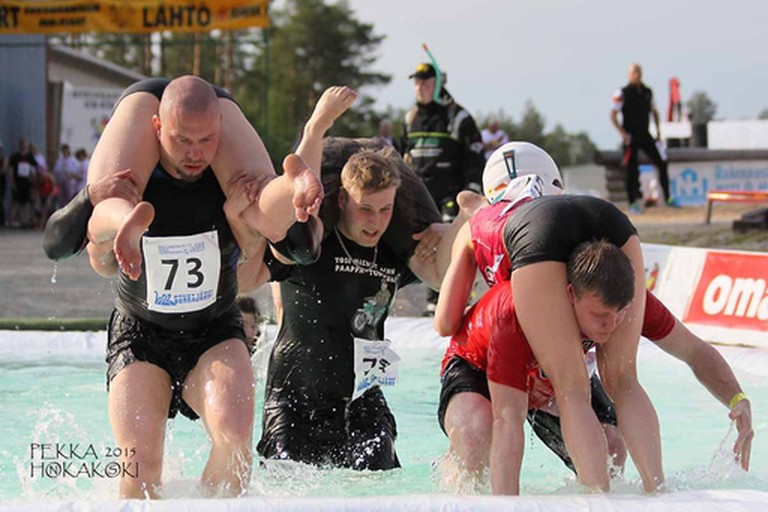 You might’ve had a sausage in your life before but never a sausage and potatoes quite like this. Simple, greasy and delicious; this traditional dish is most commonly consumed during the late-night hours after several drinks. When you place your ‘makkaraperunat‘ order at the local grill counter, make sure to include everything – kaikilla mausteilla – to your sausage and potato portion; pickled cucumber with onion, mustard and ketchup are all flavor-enhancers. Eat it up; you won’t be sorry. 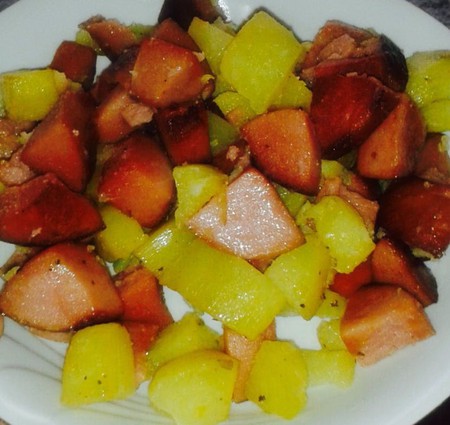 Grilli is not a barbecue grill but a fast food joint placed on different corners of any city, town or village in Finland. One rule (and in many ways the only rule) when going to a Grilli to get your makkaraperunat or lihapiirakka nakilla (bread filled with meat and sausage) do not, under any circumstances, skip the queue. Most people accompanying you to a grillijono are peaceful but every once in a while an intoxicated individual is willing to pick a fight with anyone who steps out of line. To avoid this from happening, remember to respect the rules of queueing up and patiently wait for your turn at the grill. 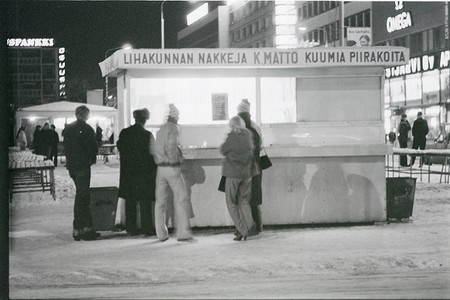 Queue at the Grill in Kuopio | © suomisyojajuo/Flickr

Mämmi, in Swedish memma, is a traditional Easter dessert in Finland. This culinary delight consists of water, powdered malted rye and rye flour, yet special ingredients such as orange zest, salt or molasses are sometimes added into the mixture. The dough first goes through a natural sweetening process before it’s baked to perfection and then cooled down. Mämmi has been around since the 16th century, and it is to be consumed cold with lots of cream and with lots of sugar. 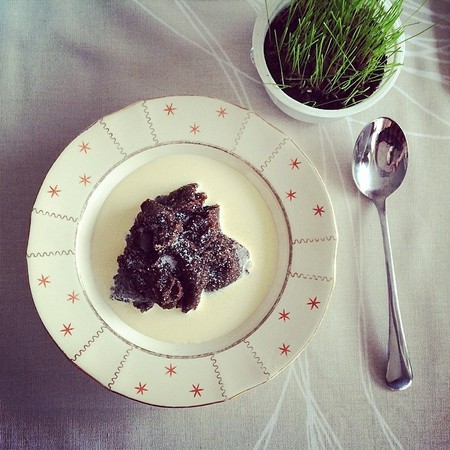 Sauna plays a special role in the cultural traditions of Finland, and no visit to the country can be made without experiencing the true nature of sauna – the purifying act of using vihta or vasta. These two words mean the same thing: a twig bundle made of birch twigs, bundled together with natural material. This tradition is mostly cultivated during the summertime when fresh birch twigs and leaves are available everywhere. Once you have made it to Finnish sauna and have been handed a vihta, you are ready to start hitting yourself gently with this object, leaving your skin red, slightly sore and smelling like a summer forest. It helps with blood circulation too – an absolute must, especially during the Midsummer celebrations! 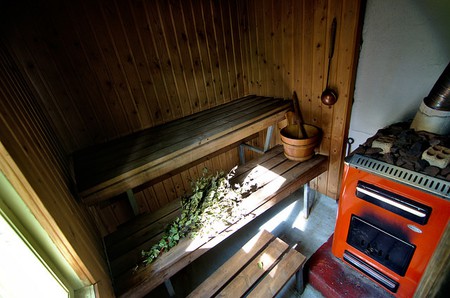 If the heat of the sauna gets too intense for your liking, it’s totally acceptable to request to go out for a ‘jäähy‘ (a term also used in ice hockey, meaning penalty) – a cooling break from the sweat room. Now, jäähy is basically divided into three categories: starting with the one where you must jump into the nearby lake/river/sea, followed by the one where you’re obliged to run naked into the freezing embrace of a snow pile while screaming your lungs out of pain and excitement, or, if you’re lucky enough, the one with a relaxed conversation, steaming air and a beer in your hands. Depending on the nature of your visit and on the level of drunkenness of your fellow Finns, you have at least a 50 percent chance of surviving without getting cold or wet but just pleasantly refreshed. 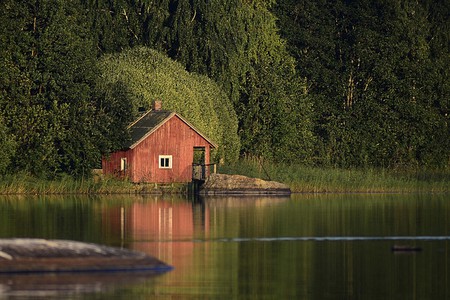 Here’s an ancient tradition for you – molybdomancy, adapted to the culture all the way from ancient Greece. Molybdomancy, or tinanvalanta, basically means melting a piece of tin, normally shaped in the form of a horseshoe, over a stove or a fireplace and throwing the melted metal into a bucket of cold water. Why? Quite simply because the resulting formation, or more accurately, its shadow, will predict the future! This entertaining occultist tradition is followed on New Year’s Eve in order to take a look at what the year ahead will bring to your life: a bubbly surface of the tin will bring you fortunes, a horse promises a new car, whereas a fragile surface predicts misfortune. Believe it or not, tinanvalanta is a legitimate part of New Year’s celebrations in Finland. 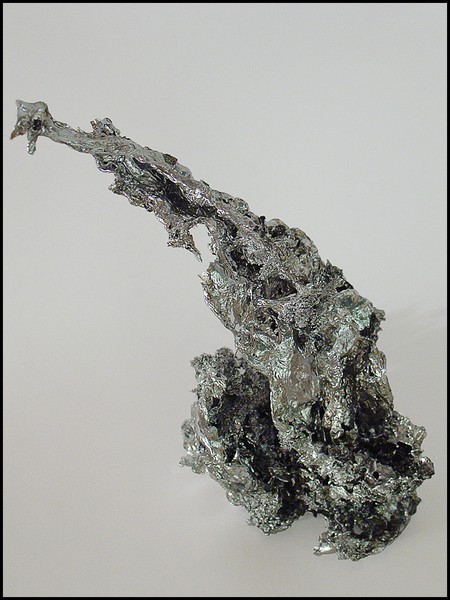 In a country where many of its inhabitants are dedicated fans of hard rock and heavy metal music, it may not come as a surprise that the yearly Air Guitar World Championships takes place in Northern Finland, in the city of Oulu, as part of the Oulu Music Video Festival. The first edition of the contest was organized in a joking manner but peculiarly became so popular that the festival now administers an official Network of Air Guitar World Championships. Talking about popularity: the network is currently present in over 20 countries! For those who are not familiar with the noble art of air guitar playing, imagine a guitar that doesn’t exist. Now, imagine playing that guitar while dancing, lip-singing and as you go along, building up anticipation into a grand guitar solo, thus, winning the audience’s hearts and the jury’s votes. 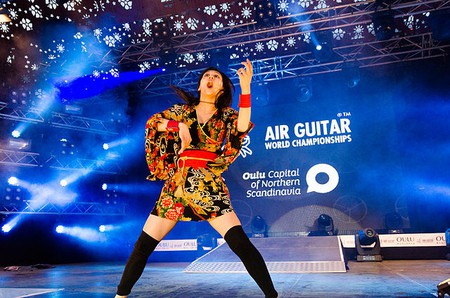 © Aleksi Ollila/WikiCommons
Give us feedback