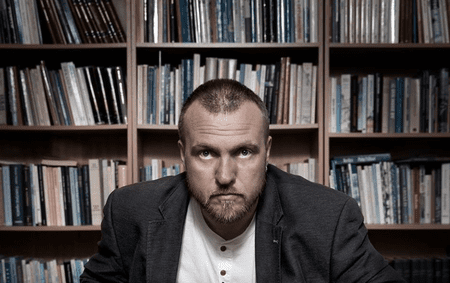 The Faroese writer and poet, featured in our Global Anthology, talks about writing for a small audience, the ancient Faroese sagas, and the possibility that magical realism may have originated on the islands.

In May of 2017, a literary conference was held in Tórshavn, the capital of the Faroe Islands. Bannered under a title taken from a novel by the classic Faorese writer William Heinesen, “The Tower at the End of the World” wasn’t a typical bookish affair; rather, the writers convening on this small self-governing Nordic archipelago had a particular unifying quality—they were all island writers. The attendees, which included Icelandic writer Sjón, the Greenlandic writer Niviaq Korneliussen, and the Antiguan writer Jamaica Kincaid, were invited to “like the role of islands and island literatures in contemporary literature [and to] shed light on poetry, geography, world-makings and globalization in island literatures around the globe.”

While the Faroe Islands may not at first seem the most obvious location to host an international literary conference, the archipelago in truth has a rich oral literary heritage dating back centuries, and a growing body of equally rich written work. But like many island locals, the literature of the Faroese has struggled to find translators, publishers and readers off the island. For the contemporary Faroese writer and poet Oddfríður Marni Rasmussen, a solution to this conundrum has been to produce an English-language edition of Vencil, the Faroese literary magazine he co-edits. Reading through its pages gives one the feeling of unveiling a previously hidden treasure of literature; a diversity of styles and voices—from pastoral poetry to gritty realism—are brought to life through the indefatigable translations of Marita Thomsen.

Rasmussen’s own contribution “Age Erases Itself”, republished as part of our Global Anthology, is a harmonious mix of postmodernism and magical realism in which a poet discovers that he has the power to alter the physical world through his words. It is as epic a story as can be compacted into 2,300 words, a tale that begins in 16th-century Faroe Islands and concludes far away in Tierra del Fuego in the not too distant future. It is a story that recalls the fantastical narratives of César Aira and yet feels like something new and gorgeous for any reader anywhere. Rasmussen grew up in the village of Sandur on Sandoy, one of the archipelago’s southern islands, and has authored 13 poetry collections, of which the first was published in 1994. He is currently working on his first novel.

We spoke to Rasmussen about how he came to write “Age Erases Itself”, the history and fate of Faroese literature, and how William Heinesen may have invented magical realism.

“Age Erases Itself” is a story in which the protagonist, a poet named Tommurin, inherits an ability to change/erase the world quite literally with his pen, a power that causes him to behave erratically. Could you talk about where the inspiration for this idea came from?

It’s never easy to trace the origin of an idea, but in this case, this particular story was inspired by something I read by Jens Christian Svabo, an early Faroese writer whose work dates back to the Age of Enlightenment. He describes a hurricane that occurred in 1629, which formed at least two islets and where entire sandbanks migrated from one village to another, including the one that is in present-day Saksun. So I had the idea that it would be a good challenge to try and narrate a short story that spans over 400 years. I started with the Svabo quote, then drew the scenery, and then worked to bring my protagonist to life. And then I thought, “What if the protagonist was a writer? And what if what he writes comes to reality?” That’s when the story revealed itself to me, and from then on it was quite easy to write. As a writer, you are obliged to use words to change the way people see the world. To give my protagonist the power to change the physical world with his writing, I simply took the obligation literally. While I’m not a methodical or a structural writer, I do take my time with story or a poem. I haven’t published many stories, maybe only 10 or so. On the other hand, I’ve published 15 books of poetry, and consider myself a poet first and foremost.

This story for me displays tropes of postmodernism and magical realism: Tommurin has a power to do good by making the miseries of the world disappear, but he seems more good-hearted before he realizes this power, like when the village children visit him and his wife. Could you talk about that?

Tommurin is trying to get the children to think for themselves and to understand how the world works. Of course, when he is given the power to change the world, he fails, because no single person can change the world on that scale. So yes, he fails big time. We try so hard to make a difference that we are bound to fail. Not only that, but people today don’t even notice that they are failing even while they are failing. Tommurin is doing everything he can to set the world right, and in the end it’s his own personal failure that becomes his downfall. To write a short story like this, I needed to know how the short story developed and differentiated in places like Europe, North America, South America, etc. By knowing the various histories of the short story, I was able to make my own version of it that has bits and pieces from its various traditions. So to answer your question, when you ask if this is a work of postmodern or magical realism, I’m not sure. It has elements of both. That I began with a quote from a 250-year-old-report, that then segues into a protagonist who discovers that he has this ability to change the world with his own words, just exemplifies how I pull from postmodernism and magical realism.

The Faroe Islands seems to have a vibrant literary scene and recently hosted a festival of island literature, and I’m wondering if you could talk about the contemporary Faroese literary landscape? What are some of the concerns and styles that make it unique?

The most famous and widely read Faroese writer is William Heinesen, who wrote in Danish. He wrote magical realism-like stories in the 1950s, before even the South American writers developed it. He was never recognized for this achievement, unfortunately, even if it’s obvious early on, like in the prologue to his 1952 novel, Móður Sjeystjørna (Mother Pleiades). Our written literary tradition is very young. The first Faroese novel, Regin í Líð’s Bábelstornið (The Tower of Babel), came out in 1909, followed shortly after by the appearance of the first Faroese poetry collection, J.H.O. Djurhuus’s Yrkingar (Poems), which came out in 1914. So the legacy of our written literature, with only 5,000 published works, only goes back a hundred years or so. Of course, our oral literary tradition, which encompasses ballads, legends, and myths, is ancient and so just as significant to us. Some of these ballads date as early as the 14th or 15th century and are set in places like northern Spain or in Hungary, but these were passed down orally, and weren’t written down until the late 19th century, just after the creation of our written language. Faroese grammar was formalized by a priest named Vencil Hammershaimb in 1854. Before then the Faroese written language was tied to the myriad spoken dialects on the islands. Now we have our own official written language. Considering that there are only about 70,000 Faroese speakers in the whole world, we consider ourselves very fortunate to even have a language, because small languages are often overshadowed, or in some cases overtaken, by major ones such as Danish or English.

What are the difficulties writers face in hoping to be read off the island?

We have 110 members in our Writer’s Union. That is a lot considering that only a half-dozen or so can make a living off their writing. And in order to do that, a writer has to be translated into a bigger language, but publishing houses in other countries do not want to spend money on some book from the Faroe Islands. So we are stuck in our own, tiny little market. One hope is that the tourism, which grows exponentially every year, will raise interest in our literature.

Who are some of the Island’s notable living writers that you would like to see read?

We have many good writers. Carl Johan Jensen writes epic novels that connect Faroese history with that of Europe. His fiction and poetry are currently translated into Norwegian and Icelandic. Jóanes Nielsen is another writer of historical fiction novels that have been translated into German. Tóroddur Poulsen is a Faroese poet that has been translated into English. Arnbjørn Ólavsson Dalsgarð is a very good writer of short stories that feel realistic and are very tight in structure, much like Raymond Carver and Ernest Hemingway.

What are you currently working on? And do you have plans for more of your prose to be translated into English? A novel, perhaps?

I’m currently working on a book of poems called Og (And). It is a long poem and love story between a “he” and a “she”. The poem is a suite in that it is built like a dance between two people—they dance together, they dance apart, they dance with nature and with society. It will be published this summer. After this, I’m going to finish my first novel about a man who has lost his wife and tries to move on by taking a strange woman into his house. I work full-time as a teacher in the eighth and ninth grades, so all my spare time—weekends, days off, or longer holiday periods—I use to write. I would very much like to see more of my short stories translated into English, but the three publishing houses in the Faroe Islands do not have the money or connections to publishers in England, or Germany, or the US, so as writers we are on our own. We have a literary institution called FarLit, who work to promote Faroese literature, but their resources are limited, and they can only focus on few literary markets such as Germany, Denmark and Britain. I’m also the co-editor of Vencil, a literary magazine. We have translated one issue into English, and we have plans to translate a second issue next spring. Finally, I have an ongoing collaboration with a Danish photographer where my poems are paired with his photography. These poems appear side-by-side in Faroese, Danish, and English. We published our second book, Gandakendu Føroyar (Enchanted Faroe Islands), in 2016.