Denmark's Traditional Apple Pork Dish: What You Need to Know 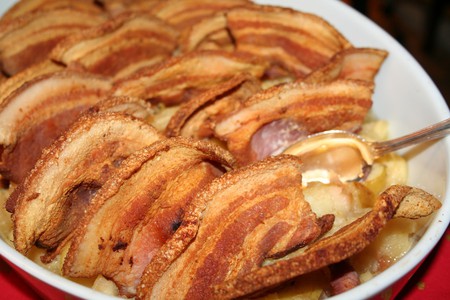 A delicious dish of apple and bacon-æbleflæsk | © Louise / Flickr

Discover the history and secret ingredients of æbleflæsk, the tasty and popular Danish apple pork dish that dates back to the 18th century. In a country where pigs outnumber locals, it comes as no surprise that many national dishes have pork in the epicenter. Therefore, Danes made sure to come up with a wide range of recipes in order to never get bored with their favorite meat. One of the most popular and tastiest dishes is æbleflæsk – trust us, preparing it is much easier than pronouncing it. Æbleflæsk translates to apple-pork so as you may guess, the main ingredients you need for this delightful recipe are pork and apples, two products Denmark has in abundance.

How æbleflæsk survived for three centuries

Dating back to the 18th century, æbleflæsk is considered one of the oldest Danish dishes. Nowadays, locals eat æbleflæsk just because it’s tasty – don’t get us wrong, it’s a pretty good reason on its own – but the taste wasn’t the main thing that made æbleflæsk a national dish.

During the winter season, which lasted from September to March, æbleflæsk was one of the main dishes for peasants living in the Danish countryside. Being the coldest time of the year, Danes needed a food that could provide them with lots of energy in order to handle the low temperatures and be able to work outdoors. Plus, apples were one of the few fruits that could be found during the Scandinavian winter.

Even though there were many variations of the recipe depending on the region, most Danes at the time were using smoked, salted or air-dried pork, which they preserved in their storage rooms for more than a year.

By the time industrialization started in Denmark, æbleflæsk had already become a favorite national dish and the farmers who moved to larger cities brought the great recipe with them. Even though the conditions weren’t as hard as in the countryside, Danes had already realized that the flavor of pork matched perfectly with apples, so they made sure to keep it in their culinary habits. It wasn’t long before the cities’ inhabitants adopted this recipe, which survived for more than two centuries. 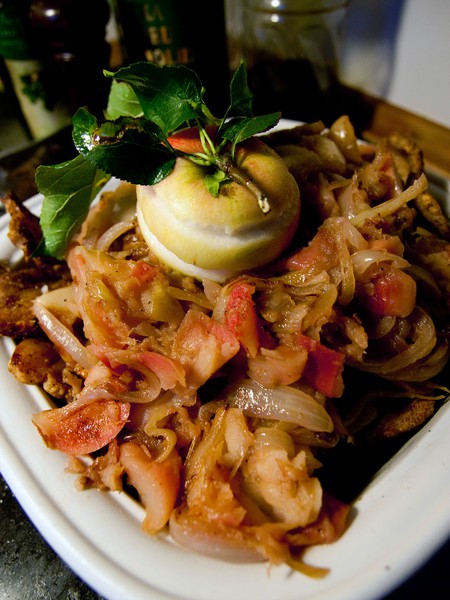 When do locals eat æbleflæsk nowadays?

Even though in the 18th century æbleflæsk was a popular dish because it was cheap, tasty and provided the necessary calories to survive the cold winter days, nowadays it’s served in high-end restaurants and it’s a Christmas tradition to serve apple-pork during lunch or dinner. It is still considered a winter recipe that is mostly made during December but that doesn’t mean you won’t find it the rest of the year as well. It’s very common for locals to eat æbleflæsk on top of a smørrebrød when they need a quick and nutritious lunch.

A delicious dish of apple and bacon-æbleflæsk | © Louise / Flickr

Other ingredients you need for æbleflæsk

Even though there are many different ways for making the delicious Danish dish, the main recipe includes thick slices of streaky pork, apples, butter, sugar, salt and pepper. There is an ongoing debate among Danes about adding onions to the recipe, but that has probably to do with the region their ancestors come from. In any case, we believe that with or without onions, æbleflæsk is super tasty and is one of the must-taste dishes while visiting Denmark.