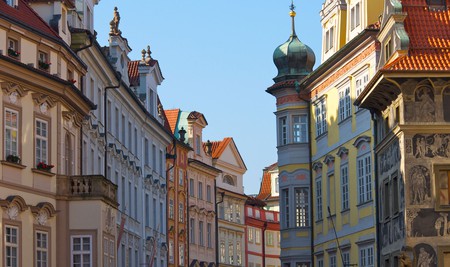 There are plenty of great places to stay in Prague Old Town. From a hotel on the banks of the Vltava River where Mozart once stayed, to one occupying a building that dates back to the 12th century with a rooftop restaurant looking out on Old Town Square, you aren’t short of options for exploring sights like Charles Bridge and the Clementinum Library in the historic heart of the capital of the Czech Republic. 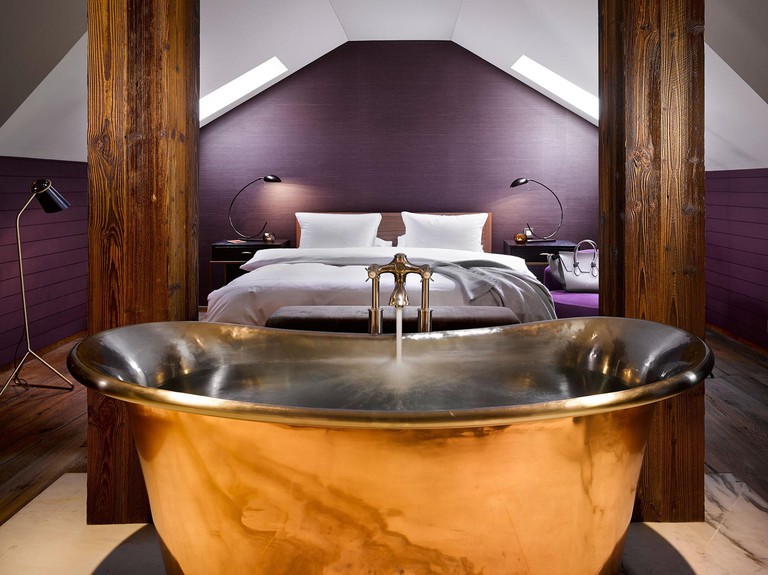 Midway between Old Town Square and Clementinum library, this sleek hotel has polished design and presentation, with old-fashioned yet modern charm. The 59 rooms are stripped-back but classy and there’s a well-equipped spa and an upscale steakhouse. The whirlpool tub on the hotel’s rooftop terrace is a treat. 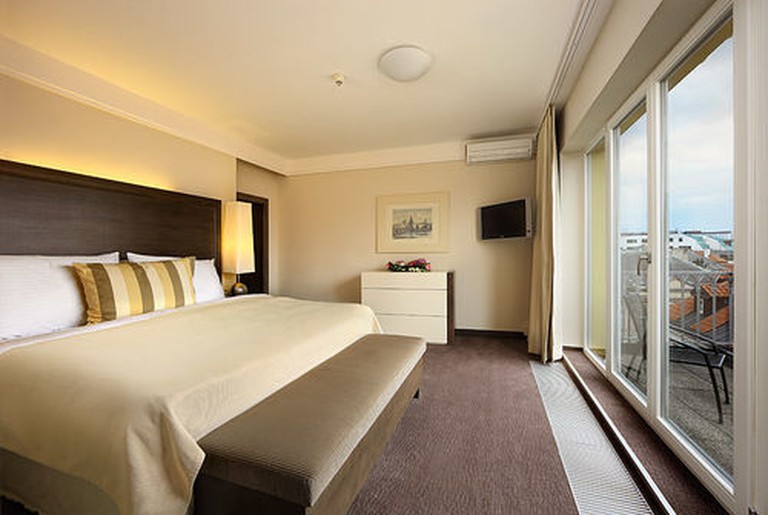 The Grand Hotel Bohemia has an opulent facade from the early 20th century and its interior boasts many original Neo-Baroque elements, including the massive Boccaccio Hall ballroom — completely restored in 1993 to its former glory — that’s available for hire. The hotel has 79 guest rooms, each with bathtubs, air-conditioning units and televisions with satellite channels. Your concierge can arrange concert and theatre tickets, private and group guides for tours of the city and trips in and outside Prague. 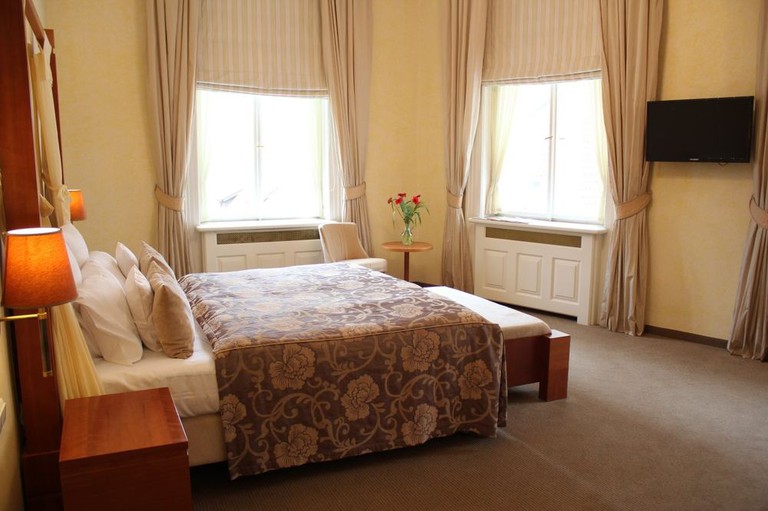 Amid stiff competition, Ventana Hotel is quite possibly the most architecturally stunning of all the hotels in Old Town. A prime example of art nouveau architecture, the hotel’s exterior looks as though it has remained frozen in time since the fin de siècle period. Its rooms are spectacular too, featuring old-fashioned design elements that hark back to the last century. Other highlights include an elegant lounge with a library and an on-site bar furnished with a Swarovski crystal chandelier. 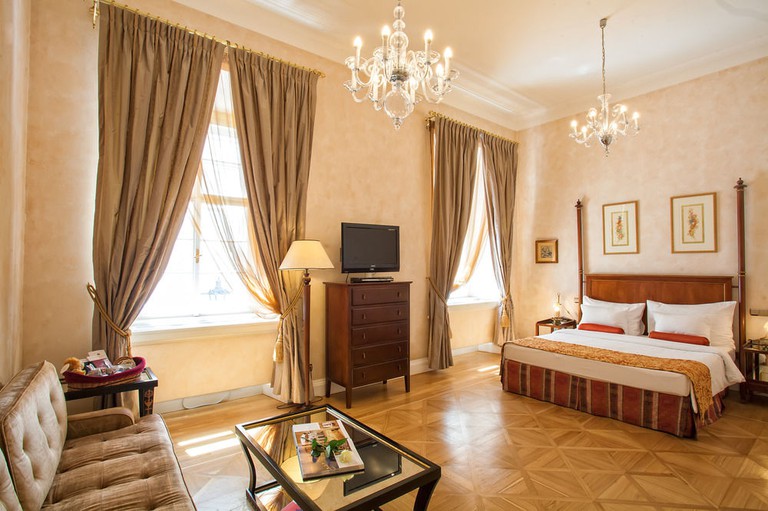 You can really experience daily life in the beating heart of Old Town at this riverside hotel just around the corner from Charles Bridge. Boasting a palatial design with a central cobbled plaza, the hotel has 48 guest rooms spread over two conjoined buildings from the 17th and 19th centuries. There are several special lodgings available as well, including a suite that was once occupied by Mozart and another that features a number of original paintings by Alfonse Mucha, a Czech painter, illustrator and graphic artist famous for his work in Paris during the art nouveau period. 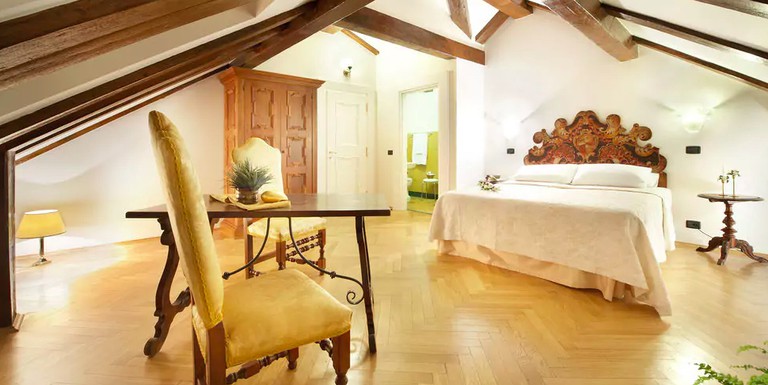 This upscale hotel in a classicist building with four wings is on a picturesque cobbled street that runs parallel to the Vltava River. There are 77 rooms, ranging from lodgings with riverside views to deluxe suites that are perfect for couples. Every room features antique furniture that matches perfectly with the hotel’s historic feel and grand location. Charles Bridge is less than 200 metres away. 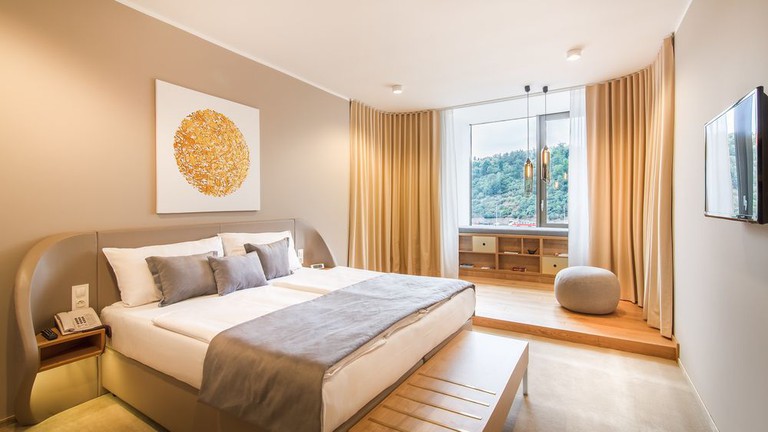 Thanks to its geometrical design and prime spot on the banks of the Vltava, this hotel is a landmark in its own right. Opened in 1978, it is well-known for its Czech Brutalist architecture and resembles a series of sharp, metallic blocks stacked above one another. President Hotel Prague was renovated in 2016 and the interior now features 130 flawless rooms tailored to contemporary travellers’ needs. Around half of the President’s rooms have riverside views and look out onto one of Prague’s greenest locales, Letná Park. There’s a spa and wellness centre plus a high-end Italian restaurant and piano bar. 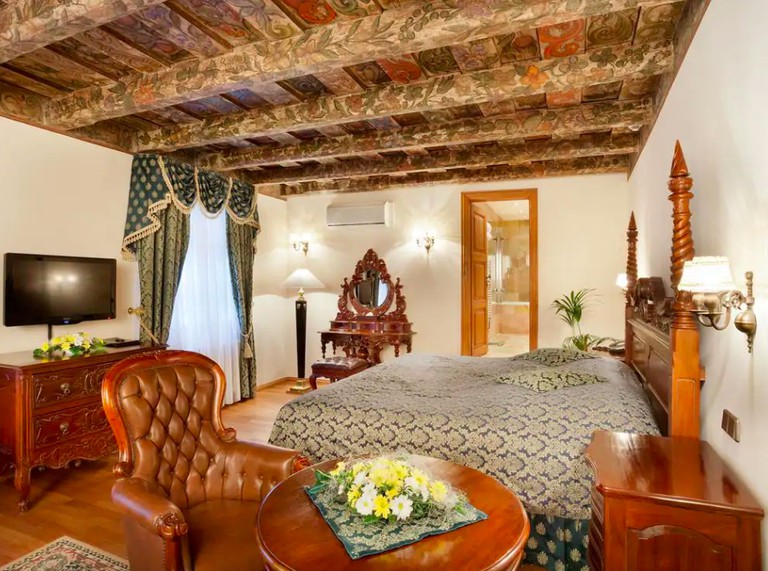 Occupying a building that dates back to the 12th century, this five-star establishment feature 24 guest rooms that were designed with comfort and elegance. The hotel contains many outstanding facilities, including a speakeasy-style bar in its basement and a rooftop restaurant that looks out onto Old Town Square. An ideal spot for keen sightseers who value high-end services, the hotel is within walking distance from dozens of famous landmarks, including Prague Astronomical Clock and Charles Bridge.