Signal Festival Illuminates a Different Side of Prague 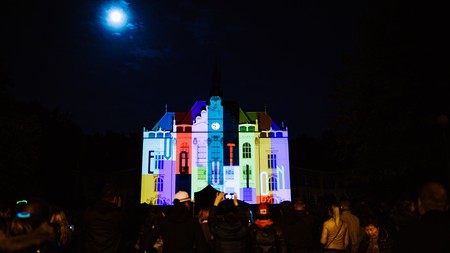 Inside the Czech Museum of Music in Prague’s Malá Strana (“Lesser Town”) area, spotlights sweep across the floor of the large, elegant hall in time to a soundtrack of hypnotic, ambient music. As the music plays and the lights change colour, an algorithm creates complex, ever-changing patterns on the wall that resemble colourful digital mandalas. The transfixing installation, Memo Akten’s Simple Harmonic Motion, is just one of 18 different exhibits spread out across the Czech capital as part of the annual digital festival Signal. 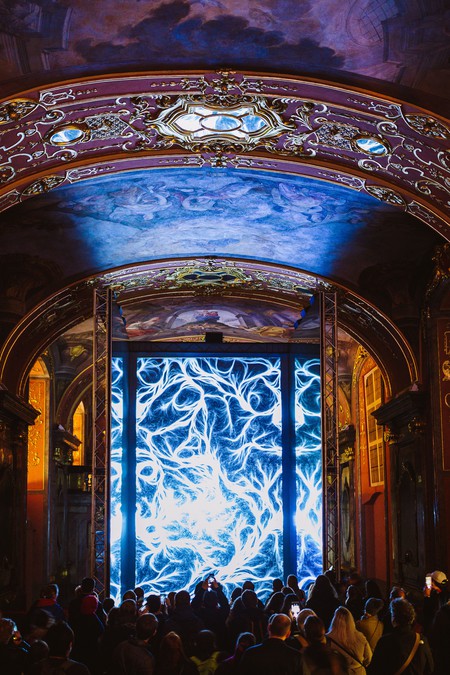 Prague has a reputation as a place to visit for cheap beer and partying, but if you avoid the throngs of tourists walking through the waffle-scented streets of the city’s Old Town, you’ll quickly see another side of the city. The striking architectural mix of fairytale-esque Art Nouveau houses, monumental Neoclassical edifices and opulent Baroque buildings makes Prague look like one of Wes Anderson’s idealised Central European dreamscapes – and it has the cultural cachet to match. Its Signal Festival is the biggest cultural event in the Czech Republic, and invites artists from all over the world to reveal and enhance places and buildings in the city that are slightly off the beaten path. 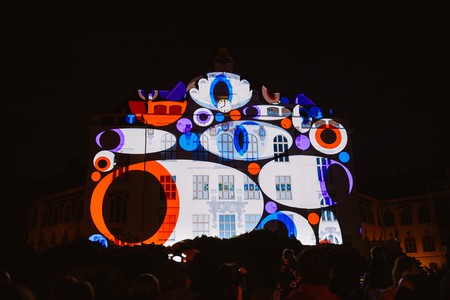 It all began in 2010, when Signal founder and director Martin Pošta introduced video mapping (the art of projecting video onto objects or buildings) to Prague on the city’s iconic Clock Tower, to celebrate its 600th anniversary. The art piece proved hugely popular, and Pošta and his team soon began creating video-mapping installations all over the world. “I started to create a wishlist of artists that I’d like to see, but there was no way you could travel around the world and see all of them,” he says. It led to the idea of creating a celebration of light and digital art in the city to bring the artists to Prague instead. Hundreds of thousands of people showed up for the first edition: “We created a monster.” 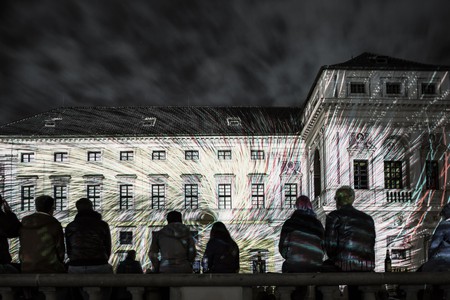 The festival is mostly free (you pay to see some of the indoor gallery installations), which means it has a minuscule budget compared with other global art festivals, but the city of Prague is supportive. Which is lucky, since a big challenge for Signal is coming up with exciting new locations, most of which change on a yearly basis. “The festival has two components: one is the marriage of the classic and the modern. We combine as many beautiful interiors and exteriors in Prague as possible, juxtaposing them with modern technology and artistry, which makes it quite unique and very interesting. The other component is bringing joy and wonder to familiar surroundings, the streets of Prague – enabling people to explore their own city in a different light,” Pošta explains. Though around 20 percent of visitors come from outside the city, Signal is very much a love letter to Prague from the people who live there. 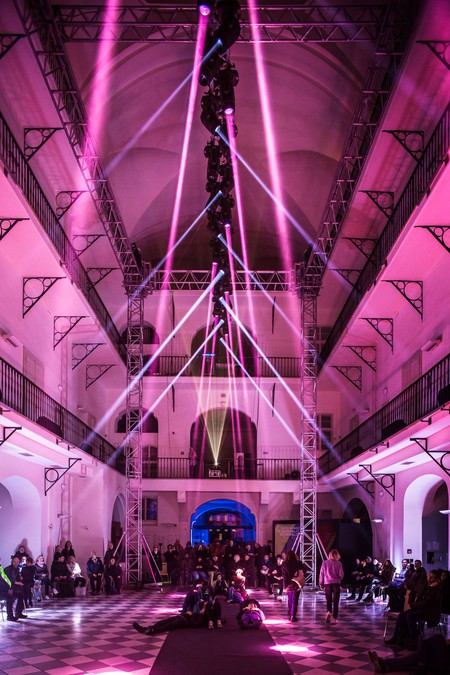 As well as the well-preserved architecture, Prague has the advantage of being a very walkable city, which means that if you stumble across one of Signal’s digital installations (and if you’re in Prague when it’s on, you most likely will), you can easily stroll to the next one on the map. The city layout also gives Prague a unique advantage when it comes to showcasing this specific kind of public art. “If you look at different modern cities, you couldn’t do it. You couldn’t do this in New York, for example, because the distances between the buildings are not suitable for projections,” Pošta says. “Physics and optics have to be taken into consideration.” 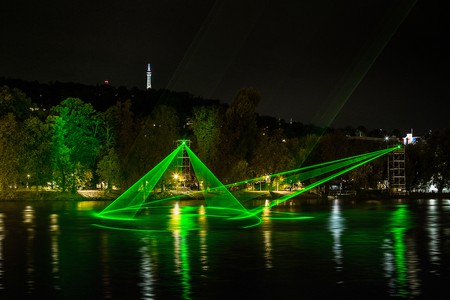 In the coming years, the festival hopes to expand even further outside the central parts of town. “We want to save the city centre and give people some breathing space,” says Pošta. Prague’s Communist past (the country was ruled by the Communist Party from 1948 to 1989, when it was still Czechoslovakia) has also influenced how residents feel about noise and disturbances late at night, with people valuing peace and quiet. “Some people miss the old structures and think Communist times were better – nobody could do anything!” says Pošta. 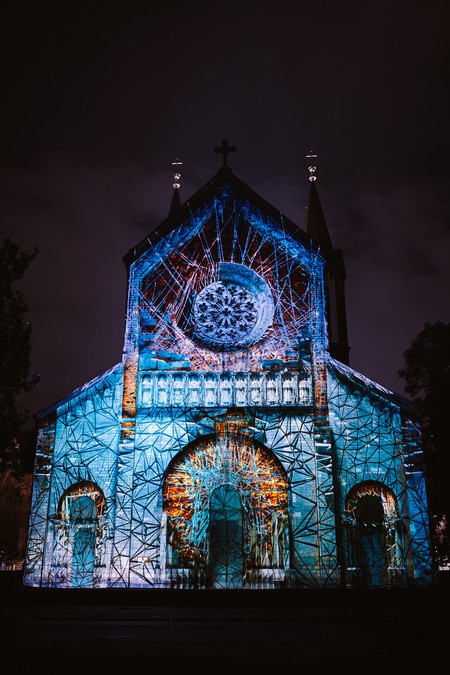 But Signal is embraced by a younger generation of creatives, for whom it is an opportunity to not just see new art but actively take part in the Czech Republic’s design future. Petr Vacek and Adam Cigler are two emerging designers whose work was showcased in the 2019 edition of Signal. In the tranquil, beautiful Convent of St Agnes of Bohemia, one of the most important Gothic buildings in Prague, their installation Reflection, chosen through an open call, drew a large crowd. The artwork consists of lots of small, hexagonal mirrors that move and reflect light, enhanced by a smoke machine and a trance-inducing soundtrack that gave the convent garden a bit of a rave vibe. 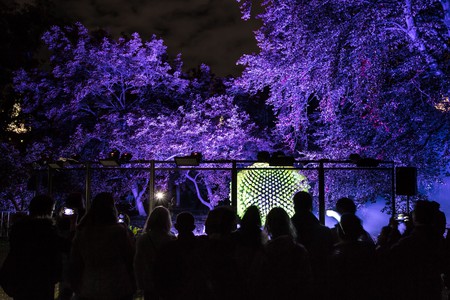 “It was great to be a part of Signal. We worked with Prusa Lab, who specialise in 3D printing, and it was a huge opportunity to learn something new for both us and them,” Vacek says. His focus is on computational and parametric design in architecture and art. “That’s what I want to develop here in the Czech Republic, because the scene is quite underpopulated,” he says. Having lived in Prague for years, he speaks fondly of the city: “It’s an amazing place to work and to live and it’s getting very popular, but I think in some ways, Prague is still waiting to be discovered. Czech people know how to make really amazing things, but a lot of them aren’t seen worldwide. Signal helps with that because it’s really visible – you can see the lights everywhere.” 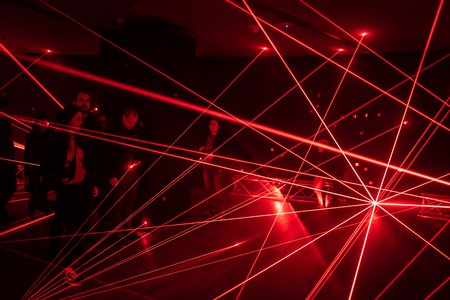