The Best Places to Book Your Stay in Prague Old Town 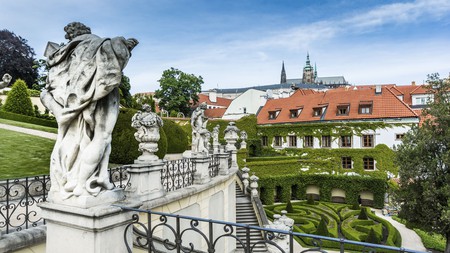 In the heart of the Czech capital, Prague Old Town blends gothic buildings and cobblestone streets with the modern aspects of the city. The Vltava River winds its way through Prague, with the Charles Bridge providing a crossing point to the Old Town and the prominent ninth-century Prague Castle. Here are the best Old Town accommodation options – bookable on Culture Trip.

Protected by Unesco World Heritage status, Prague‘s historic centre dodges the mistakes made in other European capital cities by prohibiting the construction of skyscrapers. The result is an immaculately preserved medieval Old Town with gorgeous views from almost any lofty position. So crane your neck and take in the gothic architecture and the stunning ballrooms that are fit for Mozart himself. Here’s our pick of the best places to stay in Prague for exploring its Old Town – all yours to book via Culture Trip. 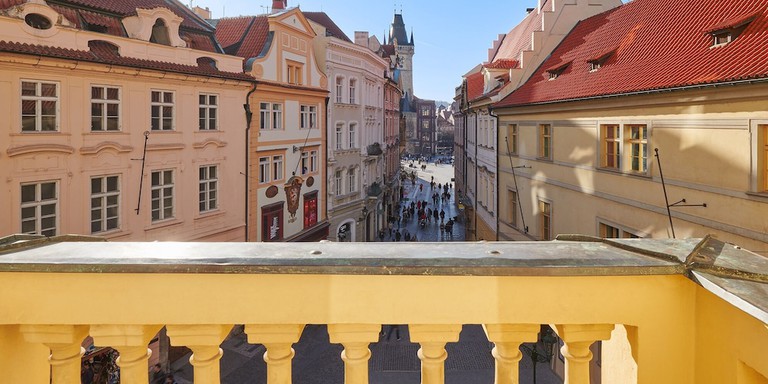 This lemon-tinged Renaissance-Revival building sits in the gothic shadows of the 14th-century Tyn Church, offering guests a privileged view of its illuminated spires long after the Old Town’s daily throng has dissipated. If you happen to get a room on the west side of the hotel, you might even get a glimpse of the 600-year-old Astronomical clock tower. The sparkling 20ft (6m) crystal chandelier in the five-storey atrium suggests that having Swarovski as a neighbour comes with its advantages. Settle in for a Czech beer in the Ventana Bar and marvel at the glittering, elegant decor. 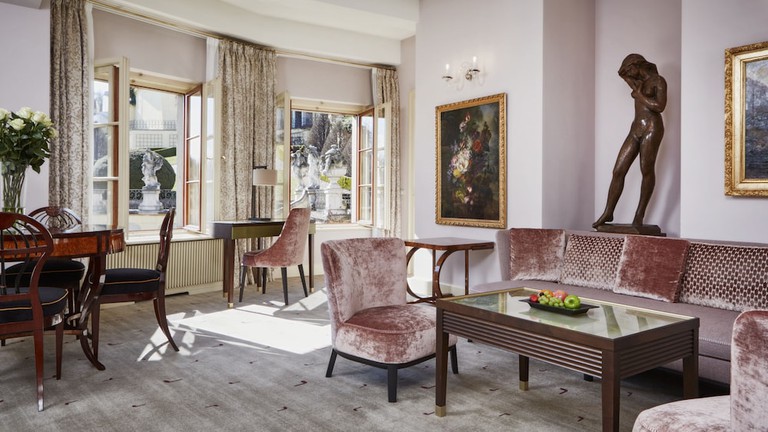 Describing itself as a “virtuoso” hotel, this former theatre has been reimagined by Italian architects Rocco Magnoli and Lorenzo Carmellini, famed for their work with fashion designer Gianni Versace. They’ve gone to great efforts to retain the building’s creative soul, with rooms inspired by famous artists and musicians. Guests will find themselves on either the classical, opera, jazz or contemporary floor, in rooms dedicated to everyone from Mozart to Beethoven. You’ll also get direct access to the high-baroque Vrtbovska Gardens: a fine place to wander before returning to the hotel for crispy roasted duck leg at rooftop restaurant Coda. 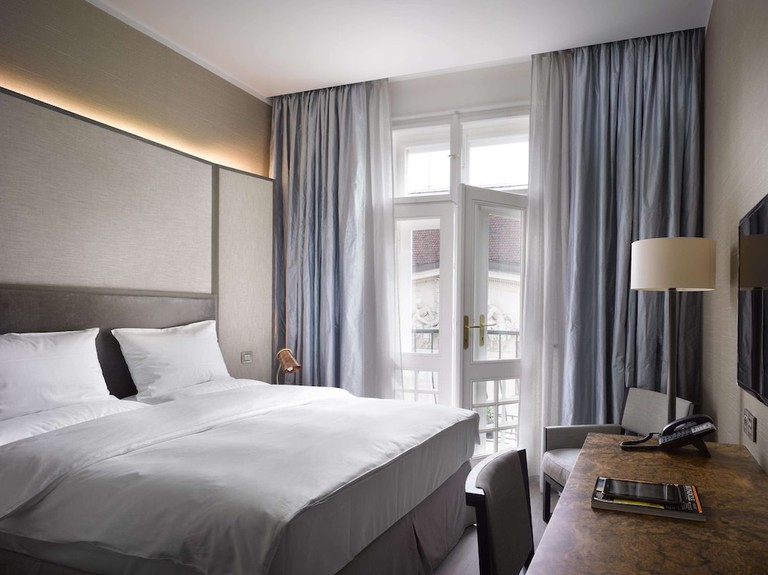 The ban on high-rises in the city centre means that any hotel with a rooftop terrace will come with views of terracotta-topped architecture. The Emblem Hotel on Platnerska Street takes that advantage to new levels, with a rooftop hot tub that can be privately rented (and goes very nicely with a bottle of prosecco) for up to an hour at a time. The pick of the rooms is the mauve-toned Suite Library, which comes with a standalone copper tub, fireplace, private library, and typewriter, should you feel the urge to express your inner Kafka-esque thoughts. 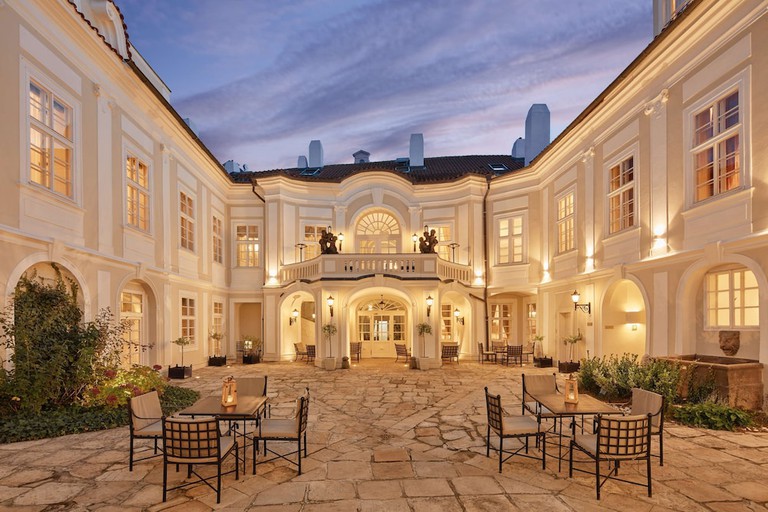 It is said that composers Richard Wagner, Josef Mysliveček and the great Wolfgang Amadeus Mozart himself resided and made music at this historic five-star hotel on the banks of the Vltava River. It is, architecturally, a grand ice-cream-and-cake affair, home to a terrific little wellness centre in an old-stone barrel-vaulted space. You can’t fail to feel creative in a building that affords some of the city’s best views. Book one of the river-view suites and enjoy the same panorama these maestros would have witnessed, including the iconic Charles Bridge and the ninth-century Prague Castle. 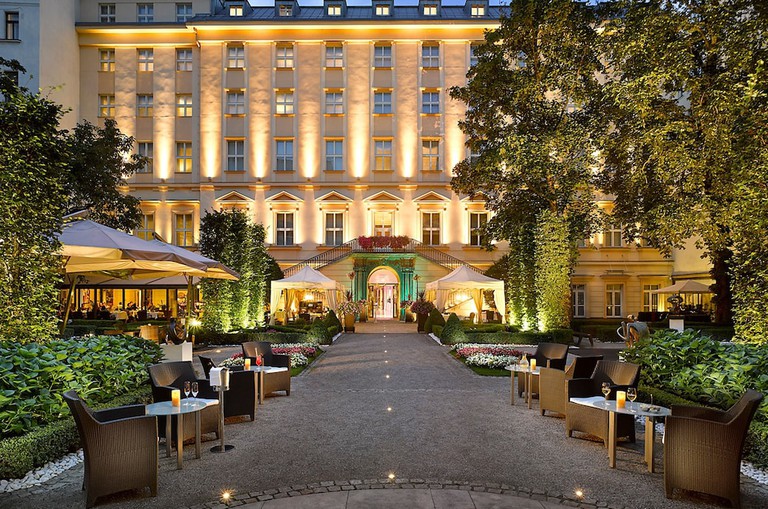 The top-hatted concierge greeting guests at this hotel hints at the pleasingly old-school hospitality one might expect from a 17th-century palace. The rooms come with an abundance of space, filled with silver and gold drapes, deep velvet rugs and twinkling chandeliers. The suites are more like standalone apartments, with fully-fitted kitchenettes, candlelit dining tables, and even teddy bears, robes and toiletries for the kids. All in all, a fairytale fantasy for all ages – particularly magical in snowy midwinter. 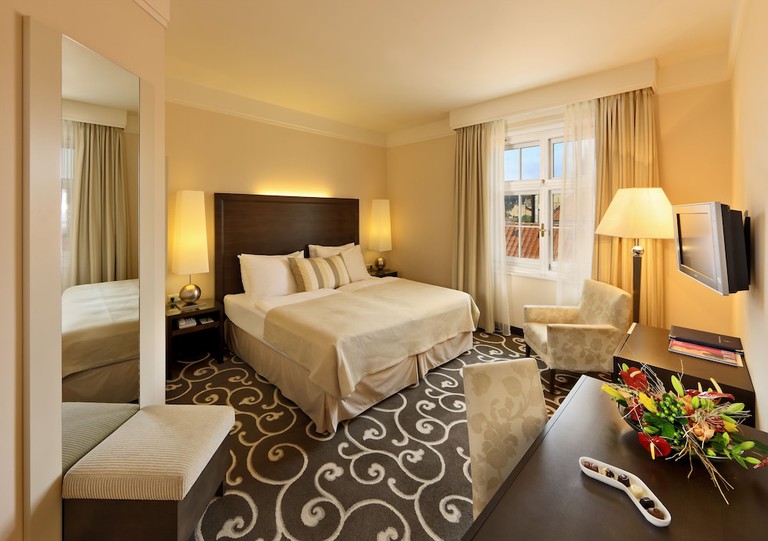 Opened in 1993, the Grand Hotel Bohemia is only metres away from Prague’s imposing Powder Tower. But the building it is housed in has a history as storied as the original city gates. It was said to be confiscated from its original owner as punishment for participating in the Bohemian Revolt of 1618. Its timeless interiors have attracted the eye of film scouts, with the stucco decoration and gilded marble of its Boccaccio ballroom, well-known from several films, including The Affair of the Necklace (2001) starring Hilary Swank. A couple of days here and you’ll feel like a movie star yourself.

The charcuterie boards at the Bar Maximilian are a work of art,and the cold meats, duck pâté and soft cheese can be washed down with the latest concoctions from local Prague microbreweries. While the dining options at this hotel near the Jewish Quarter come infused with European flair, the Planet Zen Spa is rooted firmly in the East. Treatments are based on techniques from India, Thailand, Laos, and Bali can be enjoyed in the company of Buddha sculptures. Now you’re feeling refreshed, relax at Brasserie Maximilian for a lunch of steak or duck breast. 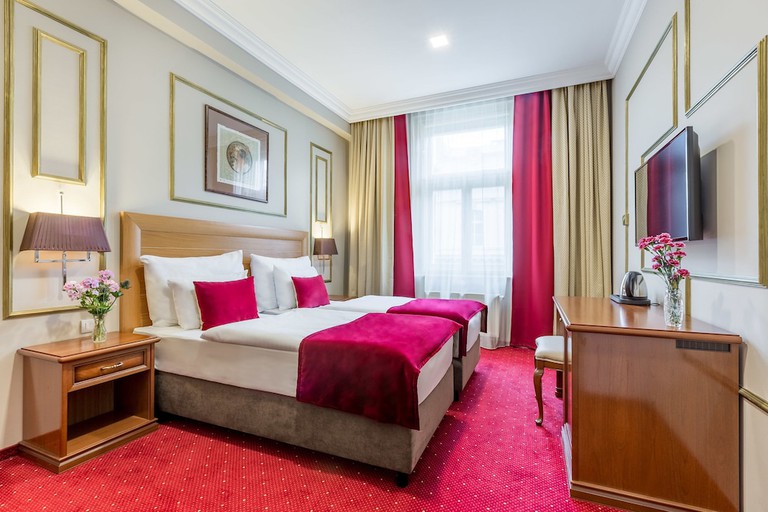 Built in 1908, this hotel says it loud, with a remarkable flamingo-pink exterior that contrasts with the quiet corner that connects U Milosrdnych Street and Dusni Street. Stay here, and you’re superbly located for any walking tour of Prague, with the Charles Bridge, Old Town Square, and the National Gallery all reachable on foot. From exposed brick arches in the dining room to timber beams found in the bedrooms, the ceilings at this hotel stand out, as does the jagged spiral staircase circling the dangling chandelier. Places to stay in Prague don’t come with more impact than this.

This is a rewrite of an article originally by Dinah Spritzer-Richter.