Valamar Collection Dubrovnik President Hotel, Dubrovnik | Courtesy of Valamar Dubrovnik President Hotel
A prime coastal location with magnificent beaches is one of Dubrovnik’s most dazzling features. Sitting on an azure Adriatic, this ancient maritime city looks out across endlessly spectacular seascapes – and the best hotels in the city have made sure to capitalize on this. In these luxurious hotels, you can enjoy breakfast while dipping your toes in the sea, and drink into the evening watching orange-hazed sunsets from the beachside bar. Here are the best beach hotels in Dubrovnik, Croatia.

The main showpiece of the Valamar hotel group, the Dubrovnik President Hotel presides over its own sprawling network of private beaches. Each of its 181 rooms has its own balcony, and there are no corners cut on the facilities, which include indoor and outdoor pools, a spa center, award-winning restaurants and children’s entertainment. A 2014 renovation saw the newly modernized hotel bumped up to 5-star status. 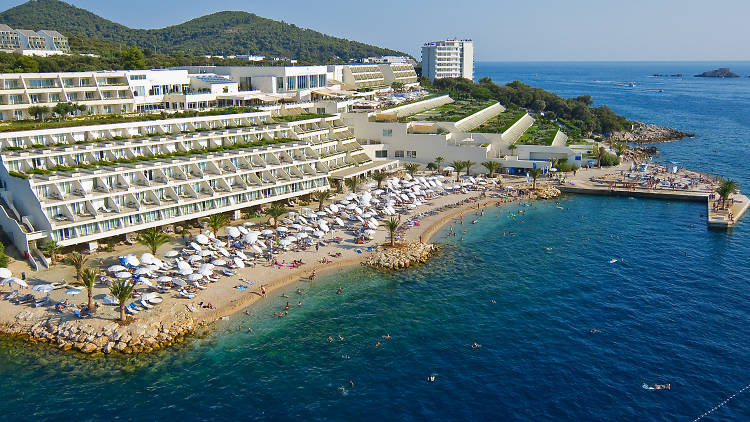 Hotel
Away from the bustle of the city center, Dubrovnik Sun Gardens sits on a quiet beach looking out across the Adriatic, and features three outdoor pools, offering viewsstretching out to the Elaphiti Islands – so you probably won’t be spending too much time in your room. But when you do, you’ll be more than comfortable, as rooms are spacious, with well-judged décor that blends a nautical theme with cool modernity.
More Info
Open In Google Maps
1 Na moru, Orašac, Dubrovačko-neretvanska županija, 20235, Croatia
+38520361500
Visit website
Give us feedback

Hotel, Villa
Villa Dubrovnik dd, Dubrovnik | © Hotel Villa Dubrovnik
Even the most seasoned hotel connoisseur will most likely be impressed by this endlessly luxurious place. Beautifully constructed over a sloping cliff edge, Villa Dubrovnik is decorated in chic, creamy tones. It boasts sea views that stretch to the nearby island of Lokrum, and the 15th-century Knežev Dvor (Rector’s Palace) is just 1.2 miles (2 kilometers) away. Best of all, its first-class restaurant extends its waiter service to the private beach – so you need never leave your lounger.
Its name might suggest a lot to live up to, but Hotel Dubrovnik Palace doesn’t fail to impress. If you’re looking for cut-glass elegance and first-class service, you’ll certainly find it here. Capitalizing on its sea-front location, the hotel features a restaurant on the beach. Inside, things are no less deluxe: rooms are light-drenched and spacious, there’s a stylish lounge, and – for those looking for a holiday detox – there’s even a health food eatery. Since opening in 1950, this five-star complex has safely held the title of Dubrovnik’s most luxurious hotel. Its haughty position – standing on a cliff edge overlooking the sea – lends it a certain grandeur, and it has all the frills to go with it: suites with stone balconies, two impeccable restaurants (one of which is outdoors), a spa and sauna, and, of course, a private beach featuring a salt-water pool. The architecture of this cliff-hugging venue is something to be admired in itself, and they’ve even made a theme of using local wood and granite – lending a certain earthiness to the well-designed interior. Equally impressive is the list of amenities, whose highlights include a beachside restaurant, a seafood restaurant, a private beach and a heated indoor pool.
Located in the verdant surroundings of Babin Kuk, Hotel Neptunsits right on a Blue Flag beach. Don’t be deceived by its unassuming exterior – its recently renovated interior oozes contemporaneity, and it boasts three separate restaurants, each headed by expert chefs. Two miles outside of Dubrovnik’s center, it’s a good choice for families looking for some quiet beach time. Rooms range from luxury couple’s suites to large family rooms. A 10-minute drive outside of the city, Hotel Mlini is best for couples looking for a low-key way to enjoy Dubrovnik. Its own quiet pebble beach, complete with sun-loungers, is one of many in the surrounding Srebreno Bay area. Designed by London architects Scott Brownrigg, the turquoise-hued interior is fresh, open, and bright. Guests are welcome to use the spa facilities in the neighboring hotel. Hotel Mlini, 34 Setaliste Marka Marojice Mlini, Dubrovnik, Croatia
Set in an old stone villa, this hotel offers old-world charm and a terraced Mediterranean restaurant – making it a favorite with honeymooners. Those really looking to up the romance should opt for one of the two sea-view rooms, which feature balconies complete with whirlpool tubs.
Since opening in 1913, Hotel Excelsior’s famous guests have included Sir Roger Moore and Queen Elizabeth II, which should give you a pretty good idea of its standard. Housed in an old villa with a modern extension, the capacious hotel comprises 141 rooms and 17 suites, along with three restaurants (one of which specializes, surprisingly, in Thai cuisine), and a piano bar. It has infallible views of the Adriatic (it’s worth paying the extra for a sea-facing room) and is an enjoyable five-minute walk from the old city gates.
More Info
Open In Google Maps
6 Ulica Vlaha Bukovca, Dubrovnik, Dubrovačko-neretvanska županija, 20000, Croatia
+38520500300
Visit website
Give us feedback
Give us feedback