Somewhere Wonderful in Croatia is Waiting 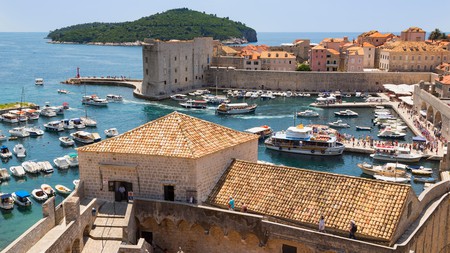 Fairytale castles, shimmering waters and medieval battlements are just a few of the enchanting features that await travellers in Croatia. Now that the country is being added to the UK Government’s green list, it seems like the perfect time to get to know this Adriatic jewel.

Croatia boasts a mix of neo-baroque buildings, cobblestone streets, grandiose fortifications and azure beaches. Whether you choose to visit the country’s bigger cities like Zagreb, Dubrovnik and Split, or spend your days lying on an exotic beach on a dreamy island hideaway, Croatia’s natural beauty is bound to win you over. For now, we focus on three cities to give you an idea of all that the country has to offer.

Verdant, artistic and with a rich heritage all at once, Croatia’s capital could be love at first sight. The city’s 18th- and 19th-century Austro-Hungarian buildings – including the neogothic Zagreb Cathedral with its striking spires – are sure to grab your attention. Walk the Upper Town’s cobblestone streets, pass by the colourful St Mark’s Church and enjoy a cup of coffee at the cafés and bakeries of Ilica Street, which spans through most of the northwestern part of the city. Head to Zagreb’s Lower Town for a wide selection of shops, museums and abundant parks. Europe’s largest park, Maksimir, lies here, boasting magical lakes and intricate footpaths. Not to be missed are also the Mimara Museum with its extensive art collection and the bittersweet Museum of Broken Relationships, which showcases the heart-breaking stories of past lovers from around the world. 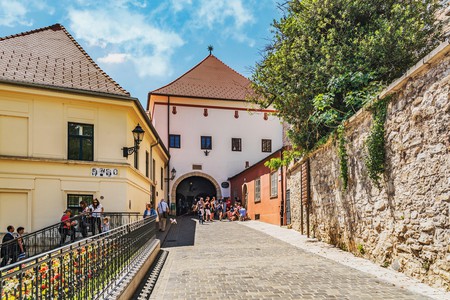 Dubbed the “pearl of the Adriatic”, Dubrovnik is one of the prettiest fortress cities in Europe. With its medieval fortifications and stone bridges, it’s no wonder the city served as a set for the hit TV show Game of Thrones. Brightly lit at night, the imposing Pile Gate is the main entrance to Dubrovnik’s historic walled city, which houses medieval churches and secluded monasteries as well as no end of konobas, the city’s quaint taverns specialising in fresh fish. On the edge of the Old Town, you will find the sumptuous Rector’s Palace, a Gothic and Renaissance building that was a site of defence in the Middle Ages. Outside the walls, Dubrovnik brims with Ottoman, Venetian and Austrian monuments and baroque buildings. Among the city’s natural beauty highlights are the rugged beaches fringed with azure waters and the uninhabited islet of Lokrum, which appears as if swallowed by a large pine forest. 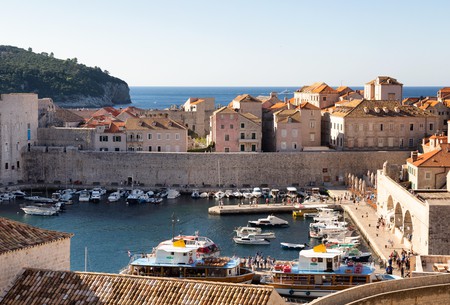 Split is the largest city in the narrow coastal strip of central Dalmatia. Almost half of the city’s old town is part of the Unesco-listed Diocletian’s Palace, which feels more like a lavish town. Along its meandering streets, you will find Gothic and Renaissance buildings next to hip cafés and little shops. Outside the historic centre, the classy Riva, Split’s seafront promenade, is locals’ main meeting hub. Created in Napoleon’s time and revamped in 2007, Riva is lined with palm trees next to bars and restaurants, while hosting most of the city’s high-calibre cultural events. Don’t miss a chance to visit Split’s outdoor markets and dreamy beaches, or the runners’ favourite, Marjan Hill. The arduous 300-stair climb to the top will compensate you with superb sunset views. On a clear day, you might even see as far as the exotic islands of Brač and Hvar. 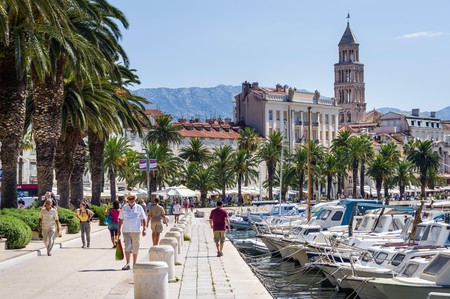 UK nationals travelling to Croatia must carry a negative COVID-19 antigen or PCR test result taken up to 48 hours and up to 72 hours respectively, before arrival. Alternatively, if you have already been vaccinated, you may bring proof of vaccination. Should you have recovered from COVID-19 within the past three months, you must show proof of recovery in the form of a doctor’s certificate or a negative test result. In the case of a rapid antigen test and a stay of longer than ten days in the country, a test must be repeated within ten days from the date of issuing the first test. Keep in mind that, while in Croatia, travellers have to wear masks on public transport and taxis, as well as in shops and other commercial premises.

In addition to evidence of your negative COVID-19 status, you are also required to hold a valid accommodation booking or proof of property ownership in Croatia to enter the country.

From 19 July, those returning to the UK will be required to take a COVID-19 test on or before day 2 after their arrival. You do not need to quarantine unless the test result is positive.

Things to do in Croatia

Zagreb’s lush parks and neo-gothic churches give way to Dubrovnik’s arresting city walls and the opulent Diocletian’s Palace in Split. Croatia’s landscape and architecture, combined with a rich cultural scene and delicious local cuisine, offer a plethora of ways to explore and appreciate this country. You can discover the best things to do in Zagreb, Dubrovnik and Split, or on the idyllic islands of Brač and Hvar through our guides, or search for amazing tours, activities and experiences to book in Croatia. For now, here are our favourite things to do while there. 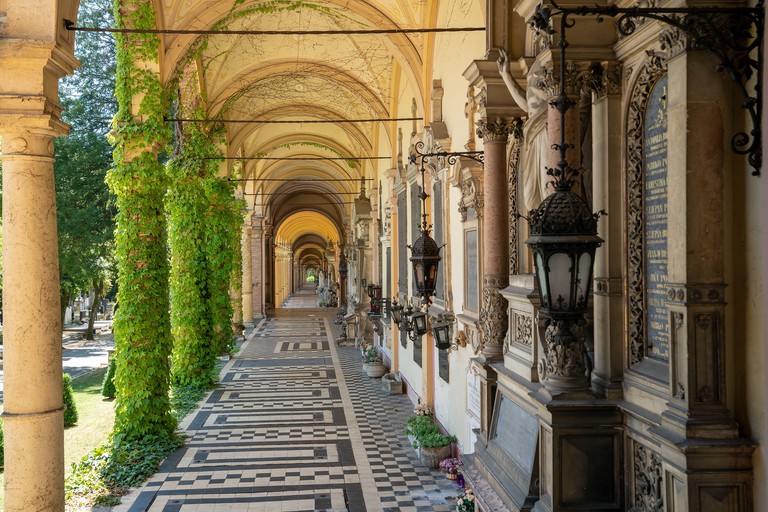 At first glance, this might seem like a morbid site to include among Croatia’s must-sees, but Zagreb’s Mirogoj Cemetery surely deserves a spot in this guide. Designed by Cathedral architect Hermann Bollé and open since 1876, Mirogoj is the country’s main cemetery and is considered one of the most beautiful in Europe. Its grandiose lineup of Neo-Renaissance arcades coupled with mosaic floors and the cupolas, all amount to a veritable work of art. Mirogoj is city-owned, accepting burials from all religious backgrounds. Spend a minute or two to take in the peace and quiet as you relax in its serene park.

Mirogoj’s arcades have sustained severe damages due to an earthquake that hit Zagreb in 2020, but they are currently under repair.

Ramble along the city walls of Dubrovnik 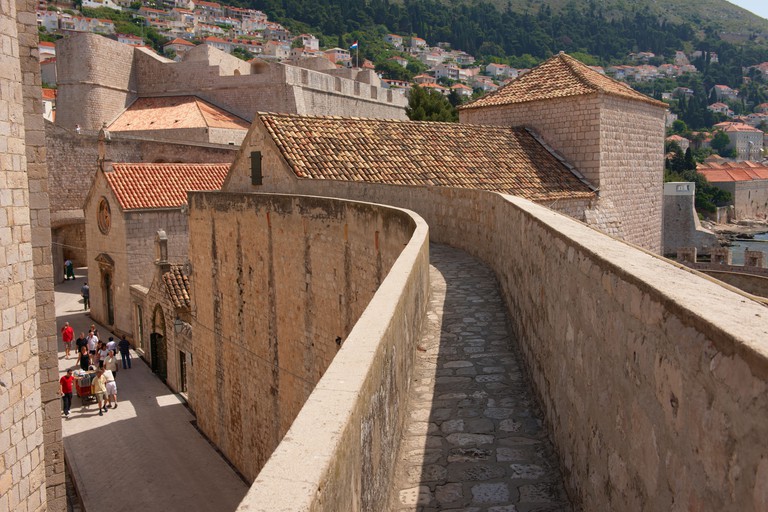 © funkyfood London - Paul Williams / Alamy Stock Photo
There is no better way to get to know Dubrovnik than through its medieval walls. These fairytale-like fortifications date back to the 8th century and measure over 1,900m (6,234ft). It might take you a little over two hours to walk the entire winding pathway, but the unparalleled sea views are absolutely worth your while. When you’re done strolling from tower to tower, pass through the Pile Gate and enter the Old Town. Your medieval adventure starts here, by the circular Great Onofrio Fountain.

Delve deep into the pathways of Split's Diocletian’s Palace 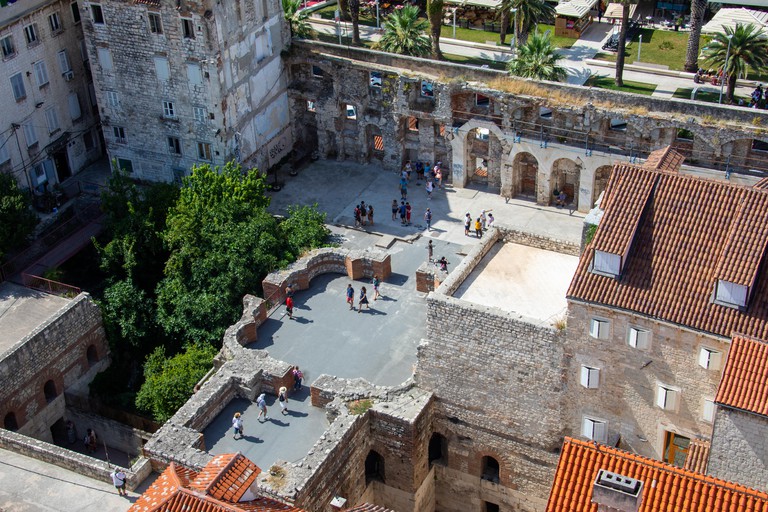 Each mystical passageway inside Diocletian’s Palace unveils a chapter of Split’s history. Originally built at the turn of the 4th century as the retirement residence of Roman emperor Diocletian, the 30,000sqm (322,900sqft) fortress in white limestone and marble is now the beating heart of the city. Within this labyrinthine complex of courtyards and alleyways, you will find red-roofed houses, churches and palaces, along with vibrant bars and restaurants. Among the highlights is the six-storey, Romanesque- and Gothic-style Cathedral of Saint Domnius. Just outside the Golden Gate of Diocletian’s Palace, the statue of Grgur Ninski by sculptor Ivan Meštrović promises to bring you good luck if you touch its big toe.

Where to stay in Croatia

Neo-gothic churches and royal fortifications create the perfect setting for some of Croatia’s most impressive places to stay. From Zagreb’s boutique hotels and Dubrovnik’s luxury villas to Split’s spa and wellness hotels, there are plenty of accommodation options to choose from. For a more traditional experience, you can choose to stay in one of these local beauties, or if you’d rather search for your dream hotel personally, our search function may come in handy. In the meantime, here are our top three picks. 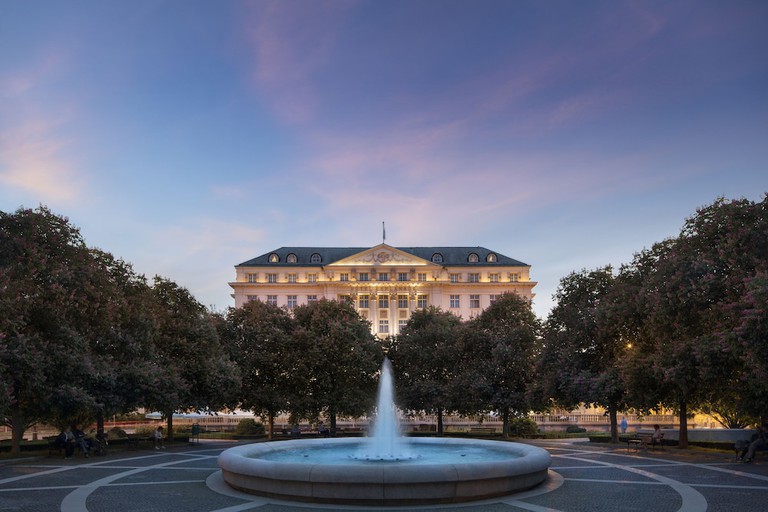 If you’re looking for a plush, characterful place to stay in the capital, Esplanade Zagreb is the way to go. This grand hotel with a retro facade and Art Deco interiors could have easily doubled as a film set for The Great Gatsby. Esplanade Zagreb opened its doors in 1925 when it was popular among passengers on the Orient Express. Follow the lead of renowned politicians, film stars and musicians and book one of the hotel’s 208 regal rooms. Spoil yourself with a massage at the onsite spa or hit the gym for an intense workout. A limousine – complete with a uniformed chauffeur – can be booked on request, whilst a VIP dog service is also available for your furry friends. 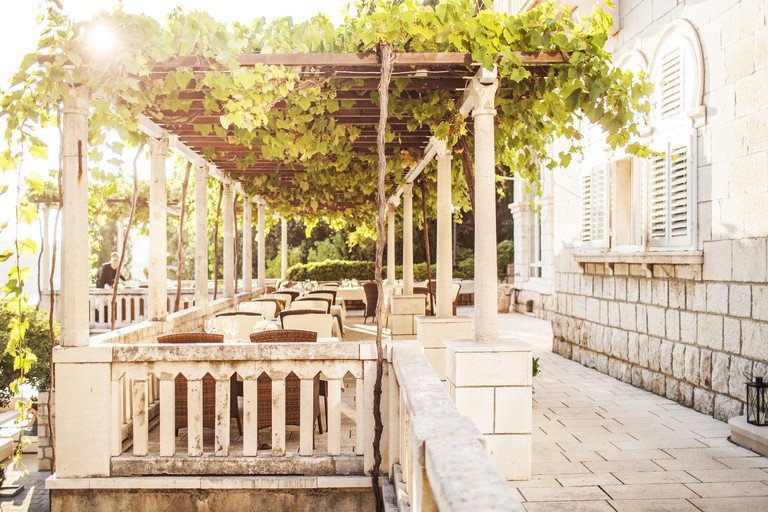 Courtesy of Villa Orsula / Expedia
View Rooms
When it comes to boutique hotels in Croatia, Villa Orsula is up there with the best. The facade’s elegant, nostalgic structure meets the homely yet classically stylish décor of the villa’s 13 rooms. If you’re looking for your very own sanctuary in the heart of crowded Dubrovnik, then Orsula’s lush, terraced garden offers a suitable hideout, if only for a few days. You can enjoy your breakfast among orange trees and fragrant lavender, or even in the privacy of your deluxe suite while gazing at the sea from an arched wooden window. Other amenities include an outdoor pool, a private beach and a fitness centre.
More info 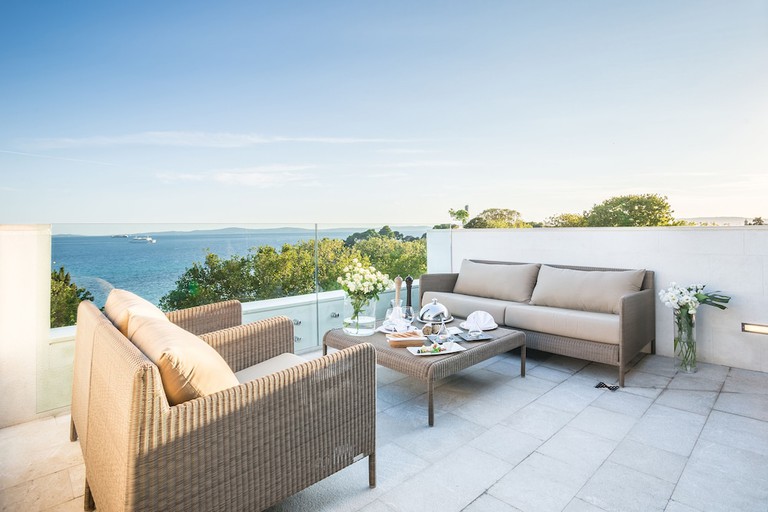 A few minutes away by foot from the bustling Riva, Split’s oldest hotel (open since 1921) offers some of the most splendid views of the Adriatic coastline. The Hotel Park’s high-end interiors in Art Deco style and turquoise and grey hues blend perfectly with the aesthetic of the region. Rest in one of the 72 posh rooms and suites or by the glamorous rooftop pool with a cocktail from the bar. Don’t miss the restaurant’s special Chef’s Table experience, which allows you to hand-pick the ingredients of your own meal from the market, accompanied by the hotel’s chef.

Where to eat and drink in Croatia

From Zagreb’s lively Dolac market to Dubrovnik’s pretty konobas, Croatia is filled with beautiful places to taste local and international flavours. Seafood is at the heart of the country’s traditional eateries. Don’t miss a chance to try Dalmatian specialities such as black cuttlefish risotto, fried squid and octopus salad, pairing the lot with a glass of aromatic Croatian wine. You can browse through our extensive Food & Drink guides for the full picture, or choose a restaurant from our suggestions below. 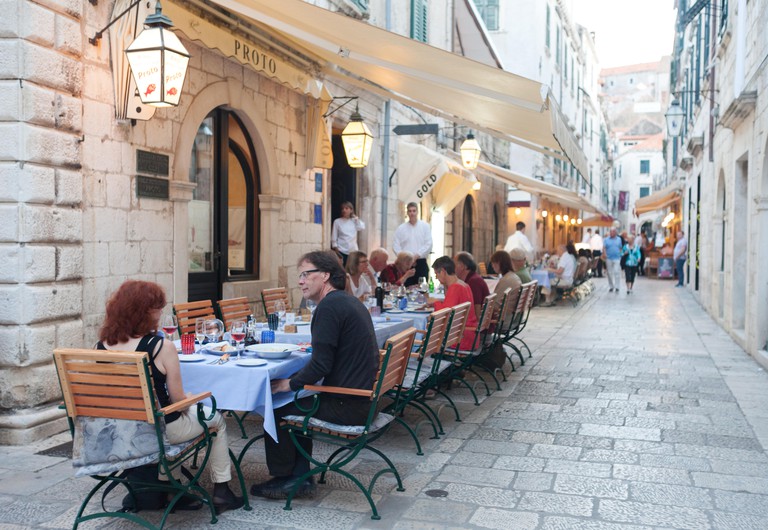 It really comes as no surprise that King Edward VIII and his wife once dined in this sophisticated fish restaurant in the heart of Dubrovnik’s Old Town. The Michelin-starred Proto has been serving some of the most delectable fresh fish in the city since 1886. Based on secret recipes passed down from local fishermen, the dishes here are always creatively presented, with vibrant pops of colour that would entice even sworn fish haters. Don’t miss the grilled bluefin tuna steak or the mouth-watering lobster salad with capers, black olives and cherry tomatoes. Meat lovers won’t be disappointed either; Proto’s juicy ribeye steak with roasted sweet potatoes is a rare treat.

Situated in a 19th-century Dalmatian home just outside Diocletian’s Palace’s walls, Konoba Matejuska celebrates Croatian cuisine. This family-run restaurant is quite popular among locals thanks to its array of traditional dishes prepared with produce sourced from the Dalmatian countryside. One of their signature dishes is the black risotto, which is best washed down with a glass of fine wine straight from local vineyards. Konoba Matejuska’s rustic design and homely flavours make it a gastronomic institution in Split.