The Most Stunning Ski Slopes in Bankso 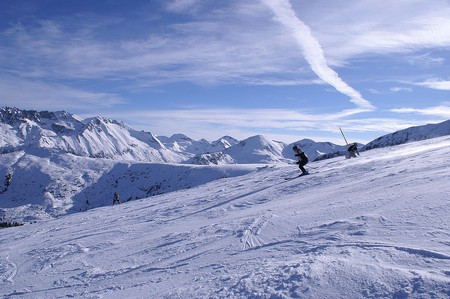 Bansko is the most famed and busy ski resort in Bulgaria, with more than 75 km (46 mi) of marked ski runs and up to five months of skiing season. If you are heading to Bansko for the first time, here’s your guide to its most scenic slopes.

Bansko has much to offer both beginners and advanced skiers and snowboarders. 35% of its slopes are ideal for newbies, 40% are medium level, while 25% are challenging slopes for advanced skiers. A scenic ski road connects the biggest slope with the town of Bansko (suitable for intermediate level), and what is even better, it is illuminated after dark so you can go back to the city on foot. 90% of the slopes have snow cannons to provide good conditions even if the winter is not very snowy. The ski season is usually between the middle of December and the middle of April.

One of the most stunning views of Bansko is the magnificent Todorka Peak (2,746 m/9,000 ft) towering over the whole resort and visible from almost everywhere. That’s where Todorka slope starts and offers a mile of elaborate descent. You can opt for the nearby Balkaniada slope for a change – the two slopes start as one at the upper stop of Todorka Lift and then split in two only to meet again at the end.

These are the two most difficult slopes named after the former Italian alpine ski racer Alberto Tomba who is often a guest of Bansko. They both start from the upper stop of Banderitsa Lift and take you down to its lower stop.

Banderitsa is perfect for those who love long, uninterrupted descents. With its almost 5 km (3 mi) length it will take you from the foot of Todorka Peak down where you can connect with other runs or stop for a hot tea and a bite.

If you don’t feel confident at the slopes, take the wide and low-grade slopes Shiligarnika and Plato – they are connected with each other and end up near the even area of Todorka slope.

Found this one hidden on my snapchat saves 👌🏽 #banskoski

If the slopes are too boring for you, you might join the fun in the deep snow drifts right below Todorka Peak during the Mad Goat Ride competition gathering extreme freestyle snowboarders and skiers every year (keep an eye on the official Bansko Ski website for updates).

A detailed map of the slopes of Bansko is available here.