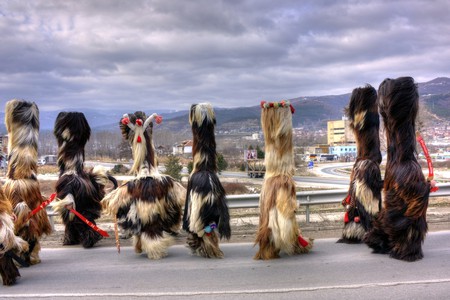 Bulgarians don’t have carnival but they have something better – the simultaneously fun and a bit scary Kukeri tradition that takes place in many towns and villages all over the country every year. If you haven’t met any monsters recently, this is the place to be.

What is the meaning of Kukeri?

Kukeri is a centuries-old tradition intended to chase evil spirits away. Men and boys dress up in furs and animal skins, put scary masks on their faces, and jump with huge bells tied around their waists. It is believed that the Kukeri monsters are so ugly that any real monster would run away screaming.

In some regions of the country, the Kukeri groups act out mini-plays. Every member of the group is assigned a specific role in a story – the king, the granny, the horse, the bear, etc. Everything in the play is grotesque and supposed to make the spectators laugh. Symbolically, the Kukeri actors often act out a wedding, sowing, harvesting, and other rituals meant to preserve the natural order. 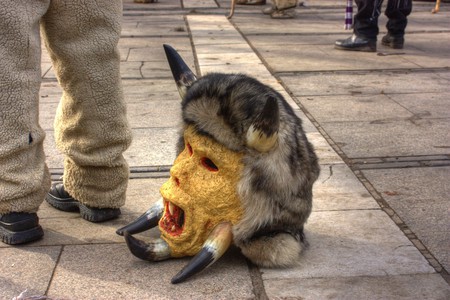 In recent years, women and young girls have started to take part in the ritual as well. The female roles were always played by men in the past.

As the tradition requires, every member of the Kukeri group must have a costume of his or her own. A costume is either inherited or sewn by its owner. The same goes for the bells, usually handed down over the generations. Some of the bells weigh no less than 220 lbs (100 kg), and the art of dancing with this burden around your waist is a thing to admire. The masks are usually constructed from wood and covered in colorful yarn threads, fur, animal teeth, beads, and horns.

In old times, the Kukeri monsters used to go from door to door and perform their magical dances in front of their hosts. Nowadays this tradition is gradually disappearing, and the Kukeri monsters perform at big festivals and specially organized events. 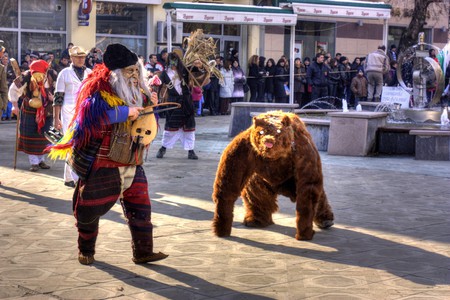 Where to watch Kukeri in Bulgaria

The biggest Kukeri festival of the year, the Surva Festival, takes place in the town of Pernik, 30 miles (50 km) from Sofia. It is actually a competition between all the Kukeri groups from around the country, and preparations continue for months. Tens of thousands of people flock from all parts of Bulgaria to watch the three-day festival. The Surva Festival takes place at the end of January or at the beginning of February.

In small villages around the ski resorts of Bansko or Razlog, people celebrate the Kukeri festival on January 1st. Another truly scenic celebration takes place in the mountain village of Shiroka Laka (in the Rhodope Mountains) at the beginning of March, with mountain peaks and beautiful black-and-white traditional houses as a background. Here, the festival goes even crazier, as the Kukeri monsters walk among the bystanders and try to touch them with hands specially covered in ash for the occasion.

This tradition is not unique to Bulgaria. Rituals similar to Kukeri are performed in Great Britain and Ireland (mummers) or in Sardinia, Italy, for example.