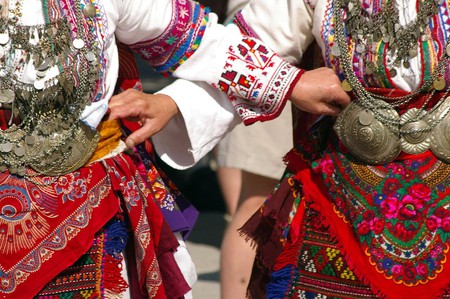 If you see Bulgarians dancing in the street holding hands and forming big circles or rows, you have most probably come across a horo, the national dance of the country. This centuries-old tradition has been preserved in Bulgaria and a few other Balkan states, and it still brings people together for moments of unity and spontaneous joy.

What is horo and how do you dance it

Dancing horo involves learning a sequence of steps and combining them with movements of the hands while folk music is playing. Sometimes dancers hold each other by their waists or perform a “dancing dialogue” standing opposite each other. Fifty years ago or so, dancing horo was a way of courting. Looking each other in the eyes during a dancing party in the main square of the village often meant that the two people liked each other and were going to get married. At a time when no radio and television existed, horo dancing was the main form of entertainment.

To make things more complicated, horo is not a single dance but rather a collective noun for the dozens of types of dances typical for the different regions of Bulgaria. Each of them has its own rhythm and other specifics, like the way people hold hands or the shapes they form while dancing. Some horos are slow, while others involve a lot of jumping and leg-crossing. Pravo horo (straight horo) is one of the easiest and usually the first a foreigner learns, since it has only four simple steps. Others, like chichovoto horo (uncle’s horo), have a series of quick steps that require more time to learn.

The revival of horo

Until recently, horo was considered an old-fashioned activity suitable only for the grannies in the local clubs for the retired. However, the past decade has seen a revival of national pride in Bulgaria, taking horo out of this clichéd conception and reinserting it into the everyday life of Bulgarians. There are many folklore dancing clubs where young people learn the steps of various types of horo, as they see this activity as a way to exercise while reconnecting with their roots. 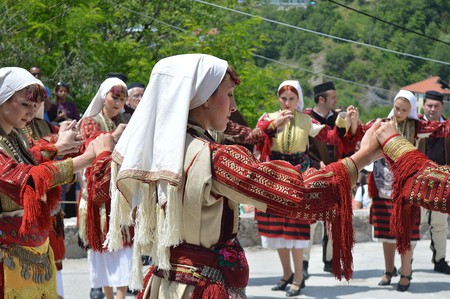 Where can you see Bulgarians dancing horo today?

No traditional festival in a town or a village in Bulgaria goes without a folk music orchestra and people dancing horo in a big circle. New Year’s Eve is also met with a special horo called Dunavsko (Danubian) performed a few minutes after the clock strikes midnight. Bulgarian weddings, although trying to break away from the stiff traditions in many ways, in most cases keep the one that requires the bride to lead the first horo of the night, now as a married woman. Another surefire way to see locals dancing is to go to a traditional tavern, especially if there is an orchestra announced for the night. Even as a foreigner, you can grab the hand of the last person in the row and try to learn the steps on the go. Bulgarians are always happy to see foreigners interested in their culture.