Top 10 Things To See And Do in Mostar, Bosnia Herzegovina

Mostar is one of the most frequented attractions in Bosnia, thanks to its outstanding natural beauty, architecture, and, of course, its famous UNESCO World Heritage Site, the Stari Most. It is full of quintessential Ottoman architecture, with plenty of traditional restaurants, market stalls, mosques and other historic buildings. It is also surrounded by stunning landscape waiting to be explored. We discover the top things to see and do in and around Mostar.

One of Mostar’s and also Bosnia’s most famous sites is the Stari Most, or ‘Old Bridge’. The bridge was built by the Ottomans in the 16th century and is exemplary of typical Islamic architecture and fine engineering. It crosses over the beautiful turquoise Neretva river, and is at the heart of Mostar’s historic Old Town. During the civil war, however, the bridge was destroyed by Croat forces but it has since been rebuilt to its exact original specifications. It is now a UNESCO World Heritage Site, having received this status in 2005 soon after it was rebuilt, and it attracts thousands of tourists to Mostar every year.

A short drive south of Mostar is the small village of Blagaj. Within Blagaj is the famous tekija, or monastery, which was founded by Dervish monks in the 16th century. The monastery is nestled at the foot of a cliff face, looking over a beautiful pool, and exemplifies classic Ottoman architecture, with its wooden window frames and overhanging roof. Today, the monastery houses a restaurant with tables looking out over the water, which makes for a picturesque and tranquil lunch setting. It is also open to look around for a small entrance fee, but since it is still a functioning religious building appropriate clothing is required.

This small stone is found near to the Stari Most, and serves as a reminder of the civil war. As tourists visit the stunning town of Mostar, it is important not to gloss over the fact that terrible atrocities were committed here relatively recently, and that the city still feels the effects of a divided population. While tourism has ensured that Mostar has been able to thrive since the war, not long ago it was under siege, and many of the locals living in the city today would have lost friends and family members. The ‘Don’t Forget’ stone serves to gently remind visitors to reflect on the city’s tragic past.

In the heart of Mostar’s picturesque Old Town is its market, or čaršija. There is a market on each side of the river near to the Stari Most, due to the split between the Bosniak and Croat ethnic groups that inhabit the city, although the difference between the two is not noticeable to visiting tourists. The market has a distinctly eastern feel, thanks to the historic Ottoman influences, with stalls selling rugs, painted plates, copper items, and souvenirs. The market is busy with locals as well as tourists, and gives visitors a good glimpse at a traditional Bosnian way of life. 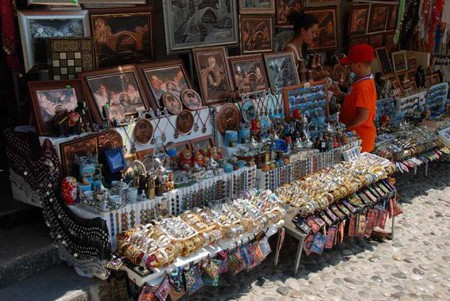 One of the key activities of life in Mostar naturally revolves around its famous bridge: bridge diving occurs mainly during the summer months, and involves trained professionals diving from the top of the Stari Most to entertain the crowds. The distance between the top of the bridge and the river below is about 20m, so must only be undertaken by professionals or by tourists who have taken a training class beforehand. There is even an official annual competition as part of Red Bull’s cliff diving competition. 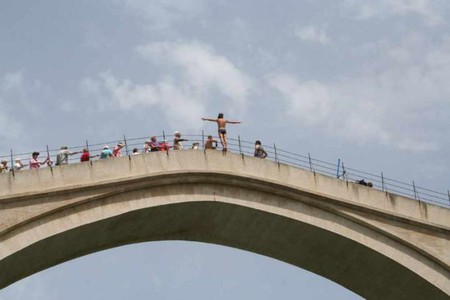 A short drive south of Mostar are the Kravice Falls, some amazing waterfalls near the small town of Kravice. The falls are currently not a well known attraction amongst tourists, meaning they are peaceful and not yet highly commercialised, although there is a small but useful boardwalk taking visitors closer to the falls. The best time to go is during the spring when there is the most water; but although there is less water during the summer, this means that visitors can swim right underneath the falls. A visit to the falls is a lovely day out away from the crowds of Mostar.

One of Mostar’s best examples of Ottoman architecture is the protected national monument, Muslibegović House. It was once inhabited by the noble Muslibegović family, and is now both a luxury hotel and museum. The interior is in keeping with traditional eastern styles, such as Ottoman rugs, white walls and wooden furnishings, with the museum exhibiting items such as books, manuscripts and handmade crafts. One of the highlights is the outer courtyard, which is shady and well kept with plenty of lush flowers and greenery. While the hotel can be considered quite expensive (it has been named one of the world’s top 10 hotels, after all), the small entrance fee for the museum gives visitors a good feel for the place.

This stunning mosque is not only an attraction itself, but is also a spot for some of the best views of the Stari Most. The mosque was built in the early 1600s by the Ottomans, and today it is one of the best preserved mosques in the area. There is a small entrance fee that includes the climb up the minaret for 360º views of the bridge, and a stroll around the outside courtyard which also offers amazing views. The interior of the mosque is small but features some lovely ornate decorations, although it is certainly worth a visit just for the views.

Inside one of Mostar’s historic buildings is a photo gallery, featuring shots taken in Mostar by a New Zealand photographer during the civil war. It is located right next to the Stari Most, and is housed in a traditional dwelling which matches the personal stories of Mostar locals told through the photos. The photos not only show the destruction of the war but also the daily struggles experienced by the local population, many of whom were simply trying to get on with their lives. The exhibition is a great opportunity to understand more about Mostar’s history and what has shaped it.

For a smaller and less touristic version of the Stari Most, the Kriva Cuprija (or ‘Crooked Bridge’) is worth a visit. It is older than the Stari Most, and is thought to have been a test-run of sorts for the later construction of the larger and more famous bridge. It has only one arch so is relatively small, but still exemplifies typical Islamic architecture of the 16th century, and is a much more peaceful place to sit and enjoy a relaxing lunch at one of the nearby restaurants. The bridge was washed away by floods in the year 2000 but was rebuilt with aid from UNESCO a year later, and was relatively unscathed by the civil war. 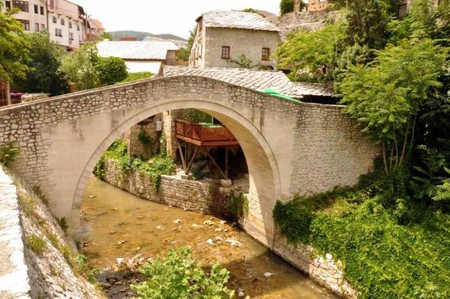