From Mozart to Modernism: How Vienna’s Contrarian Spirit Has Shaped Its Artistic Identity 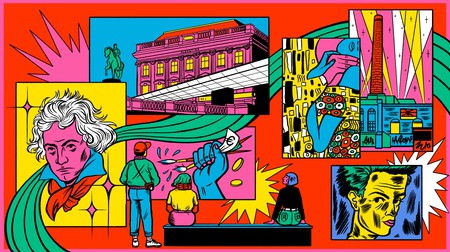 Once the capital of the Austro-Hungarian Empire, now a 21st-century city, Vienna has always been a melting pot. Culture Trip looks at how its position at a cultural crossroads has shaped its art scene and the work of Austrian artists, thinkers and composers who continue to influence the world.

For centuries, the greatest minds in the West convened in Vienna: Mozart and Beethoven; Freud and Wittgenstein; Gustav Klimt, Egon Schiele and Franz West all called it home.

Today, names like these are part of the cultural canon. Institutions in their own right, their work is shown in national galleries, spoken of in university lecture theatres and performed in grand halls. But they weren’t always so well established, and certainly weren’t all attracted to the Austrian capital because of its establishment status. There’s always been another side to the city, a less official edge, that’s shaped its art down the ages.

To this day, Vienna’s chocolate-box prettiness belies a healthy interest in the innovative and the transgressive. Indeed, there’s a real contradiction in Viennese culture between an appreciation for politeness and order on the one hand, and a healthy dose of rebellion on the other. There’s also a sense of the past living cheek by jowl with the present in this modern, smart city, in which imperial art hangs on the walls of Baroque buildings.

“Vienna is – culturally and geographically – a crossing [point] of people from a wider and very interesting region. This is reflected in its history and runs through every fibre of the city,” explains Martina Batovic, London director of The Dorotheum, one of the oldest auction houses in Central Europe, which was established in Vienna in 1707.

Its position on this cultural crossroads has put Vienna at the centre of power struggles, insurrections and propaganda, all of which are of course rich seams for art to mine. The city’s Black Friday of 1873 foreshadowed the Great Depression, while the assassination of Archduke Franz Ferdinand, heir to the Austro-Hungarian throne, heralded World War I.

Incredibly, at one point in 1913, Hitler, Trotsky, Stalin, Tito and Freud all lived within a few miles of each other in the city, frequenting the same coffee houses. Indeed, the Austrian-born Hitler famously applied to the Academy of Fine Arts and was twice rejected. No doubt Freud would have had a field day if their paths had crossed.

Today, thankfully, anarchy and revolution come in more manageable doses, most obviously in the city’s truly pioneering contemporary art scene. Much of this can be traced back to Klimt and his friend and protégé Schiele, whose work at the turn of the 20th century came to define much of what we now understand to be modern art. The willingness of both to absorb aspects of the decorative and ‘primitive’ arts (as they were then known), and their bold, confrontational approach to portraiture still has the power to shock today.

Their legacy makes Vienna a great place for artists to live and work, but there are other contributing factors, too. Vienna is still relatively affordable, a fact which helped it top the rankings of the world’s most liveable cities for the last two years, according to the Economist Intelligence Unit.

As Welsh-born photographer Ken Marten, who relocated to Vienna in 2018, sums it up by saying, “I often feel like I am living in London in the late 1980s or early 1990s, when you could afford to live and do your own thing, and not pay a fortune for a tiny room in an overcrowded house out in zone 6”. There is also a subtlety that he finds appealing. “Places like London, Berlin and New York have a kind of homogenised and prescriptive type of cool.”

Then there’s the fact that people in Vienna have an enormous appetite for art. “While it’s hard to pinpoint stereotypical characteristics as such, generally the Viennese love culture – theatre, music, art – and consume it very actively,” says Batovic.

It’s no surprise then, that the city continues to be a hotbed for creativity.

Fantastic artists and where to find them

This is perhaps best demonstrated by Vienna Art Week, which provides a unique opportunity to see both Viennese and international artists at work and at play.

The festival’s programme takes place across various venues, from traditional galleries such as the Albertina, the Kunsthaus Wien and the Kunsthistorisches Museum (“one of the best museums in the world,” according to Batovic) to more modern exhibition spaces including Belvedere 21, the Museum of Contemporary Art and MAK, the Museum of Applied Arts. The design of this last museum was originally modelled on London’s Victoria and Albert Museum, but the building is now devoted to innovative modern art, with interiors to match.

Coinciding with Vienna Art Week, a key 2019 exhibition for the city’s Leopold Museum has been 1900 – The Birth of Modernism, which explores how the modern age as we know it took root in the city. Wandering round the exhibition, the parallels with today’s global landscape are clear. It talks of the divide between the haves and the have-nots growing steadily, and of progressive ideas clashing with ever-more reactionary forces. All of this is seen to have contributed to an atmosphere ripe for experimentation and the gestation of new ideas – many of them revolutionary in nature – that would go on to change the world.

Not all of the ideas that germinated here changed the world for the better, of course. One of the best ways of understanding how this city cast off the shameful legacy of Nazism is by visiting the excellent Architekturzentrum Wien museum. The permanent exhibition a_show explores Vienna’s growth into an imperial metropolis, and the sociopolitical tensions that arose during this process, before delving into the post-war rebuilding boom when the imposing power structures of Fascism were replaced by modern, people-centric construction projects. With its space-age concepts for high-density housing, the museum reveals much about this multifaceted city, and its readiness to accept then-radical concepts such as Modernism and Brutalism. 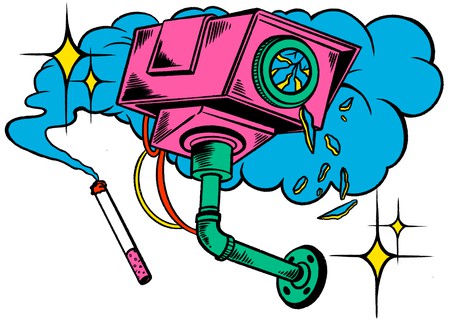 Smoke screens and nights out

Visitors to Vienna today will notice that the nonconformity that characterises the city’s contemporary art and architecture is also manifested in its nightlife, which is every bit as raucous as it was in the early 20th century (or, if the 1984 film Amadeus can be believed, in Mozart’s time). Vienna’s infamous art parties often resemble warehouse raves of the 1990s – not simply because of the grand buildings that are appropriated by sound systems, but because of the wall of cigarette smoke that hits you when you enter. Ingeniously, many of these events are officially billed as private parties, offering a loophole in the law. And the willingness of the Viennese to turn a blind eye to the smoking ban reveals yet another rebellious side to these otherwise law-abiding citizens.

“It seems almost everyone in Vienna smokes,” says Marten. “They are reluctant to ban smoking from public spaces, which doesn’t seem progressive, but they see it as an issue of personal freedom and don’t like being dictated to by the state on such matters.” A smoking ban has finally now been put in place in the city’s bars and restaurants, but it was only implemented on 1 November 2019, at least 10 years behind most other European capitals.

So far, it’s proved controversial, mostly because the Viennese like it laissez-faire. “You don’t feel like Big Brother is watching you,” explains Marten. “There isn’t CCTV, or a sense of heightened security everywhere.” Yet the city still runs with what Marten describes as a “relaxed efficiency”, and personal safety is never a problem – in fact, Vienna was recently ranked one of the safest cities in the world.

If the city feels secure, though, that doesn’t mean it’s lost its edge. That might sound contradictory, but Vienna is built on such dichotomies. It’s a city that embraces the historic and the modern, that celebrates tradition and innovation. Vienna combines Baroque imperial architecture with Brutalist modern buildings, and classical art with transgressive modern forms. And it’s because of these contradictions, rather than in spite of them, that the city has long been such an important artistic hub.

The military history museum doesn’t hold back on the darker aspects of the city’s past – and also boasts the car Franz Ferdinand was in when he was assassinated.

This is a restored 1900s-era greenhouse in the Hofburg palace gardens, which today is a mix of traditional Viennese café and modern bar, with a butterfly house attached.

Check out this English-language magazine with an Instagram account that posts about the peculiarities of living in Vienna.

Arena is the best venue for those into alternative culture and music.

Atelier 10 is a gallery dedicated to art created by people dealing with mental health issues.

Literally ‘the bread factory’, this is a complex of cafés and galleries (including Atelier 10).

Try Therme Wien for a relaxing spa day (but be prepared for the sulphurous odours emitted from the medicinal springs).

This cemetery is the site where Mozart was originally buried, now pleasantly overgrown and almost deserted, if you need a break from living people.

With thanks to Ken Marten (kenmarten.com).