An Expert's Guide to the Best Austrian Restaurants in Vienna 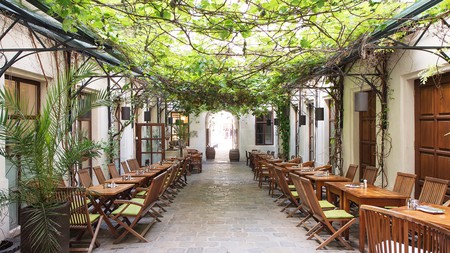 Whether you’d like to sample a classic apple strudel or try less familiar Austrian food such as altwiener backfleisch or tafelspitz, the choice of venues serving traditional cuisine in Vienna can feel overwhelming. To help you choose, Lukas Hittinger, founder of Food Tours Vienna, shares his favourite Austrian restaurants in Vienna.

If there’s anybody who’s fit to navigate Vienna’s approximately 4,000 restaurants, it’s Lukas Hittinger. The food expert and Vienna native started his cooking career at the age of 15 as an apprentice at the city’s Sky Restaurant, and within 11 years had worked his way up to the position of head chef at another Vienna restaurant, RadioCafe. Now Hittinger is taking his culinary expertise beyond the kitchen and onto the city’s streets through Food Tours Vienna, an idea that occurred to him after a trip to Budapest, where he took a group trip to learn about Hungarian cuisine.

“I have always loved to share good food with others. I really try to show authentic Austrian cuisine on my tour, even if some dishes may seem unusual,” says Hittinger. “When you’re eating with me, you should bring an open mind.”

Since establishing Food Tours Vienna in 2016, Hittinger has developed a variety of gourmet adventures including an Austrian wine-tasting option and a craft beer tour. But his original trip – which traverses the city, stopping at his favourite haunts, from a 500-year-old bakery to an artisanal chocolate shop – remains the most popular.

“Of course we don’t take people to touristy, average stuff,” says Hittinger, who prefers to show visitors a more unexpected side of Vienna’s food scene. “I would never showcase a schnitzel, which is very popular in Vienna, because I think people can do this on their own if they want to. I like to show local producers and local products.”

Austrian cuisine is hearty and wholesome, and savoury dishes often incorporate meat, dumplings and soups, while popular puddings include pastries such as strudels, germknödel (a sweet dumpling) and kaiserschmarrn (chopped-up pancake fried and served with compote). And Hittinger explains that even classic Viennese dishes borrow heavily from neighbouring countries. You’ll find goulash from Hungary and bratwurst from Germany; even wiener schnitzel, Austria’s most famous dish of breaded veal, is said to have originated in Italy.

“The emperor back in the day took dishes from other countries,” Hittinger explains. “Schnitzel more or less came from Italy to Austria, and they tried to make it more posh and emperor-appropriate, which is why they used veal instead of chicken or pork.”

While Hittinger doesn’t want to give away all his secrets (take a tour, and he’ll hand you a food map to the city listing over 60 of the best establishments), here he shares a selection of the top places to try Austria’s most beloved dishes in the heart of Vienna.

Stefanie Herkner, owner of Zur Herknerin, describes her take on Austrian cuisine as “lustful, straightforward and satisfying”. The inn, which was featured in the Vienna episode of Rick Stein’s Long Weekends, is decorated with antique furniture and knick-knacks from Herkner’s travels around Austria, giving it a vintage feel. “I really love the style of this restaurant and the mood Stefanie sets,” says Hittinger, who describes the food here as “real grandma comfort food”. Soft, moreish dumplings are the house speciality, be they savoury and served in a steaming bowl of soup or sweet and oozing with plum jam. “When in season, I recommend the fruit dumplings or the dumplings with mushroom sauce,” Hittinger notes.

Situated underground in Vienna’s oldest cellar vault, Melker Stiftskeller is well known for its offering of classic Austrian dishes paired with local wines and beers. The restaurant’s specialty is slow-roasted pork sourced from premium butcher Wiesbauer Gourmet. Hittinger, who briefly worked at the restaurant, recommends going for the gebratene surstelze (pork knuckle with cabbage and dumplings), washed down with a local beer from Haselbräu. 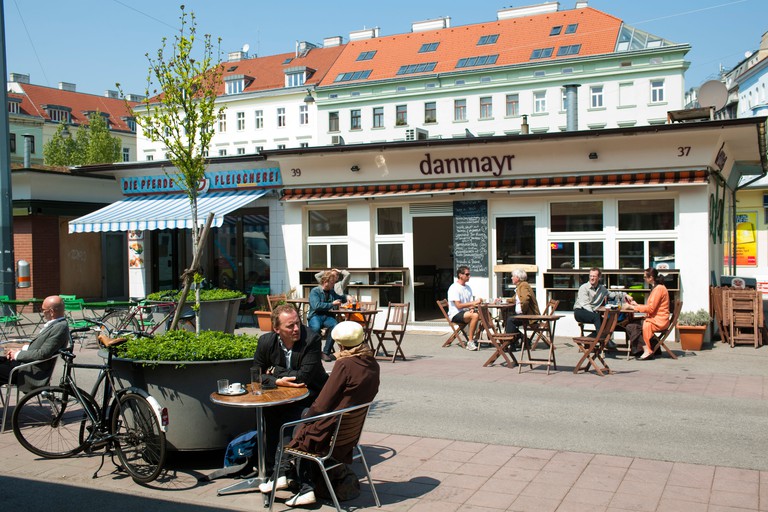 Not technically a restaurant, but worth a visit for its Austrian delicacies, Karmelitermarkt, one of Vienna’s oldest markets, is open all week long. Hittinger recommends stopping by on a Saturday, when farmers display a huge array of fresh fruit and vegetables as well as locally produced cheeses, honey, wine and other Austrian products. “Karmelitermarkt is great for Saturday morning shopping,” he explains. “The local slow food scene makes it a great place to buy produce. Make sure to pick up sausages from Britwurst.” Come with an empty stomach, and pick at geselchtes (smoked meat), artisanal bread, local cheeses and vegetables of every colour.

Open In Google Maps
10-12 Karmelitermarkt, Vienna, 1020, Austria
Give us feedback

An unpretentious diner-like establishment with wood-panelled walls, Gasthaus Rebhuhn serves sizeable portions of classic Austrian food. According to Hittinger it’s an especially good place for an Austrian lunch, and if you’ve been looking for an authentic wiener schnitzel in Vienna, you’ll find it here. “If a restaurant just says ‘schnitzel’, it can be any meat they want, but to be considered a true Viennese wiener schnitzel it must be veal,” says Hittinger. “That’s actually by law.” 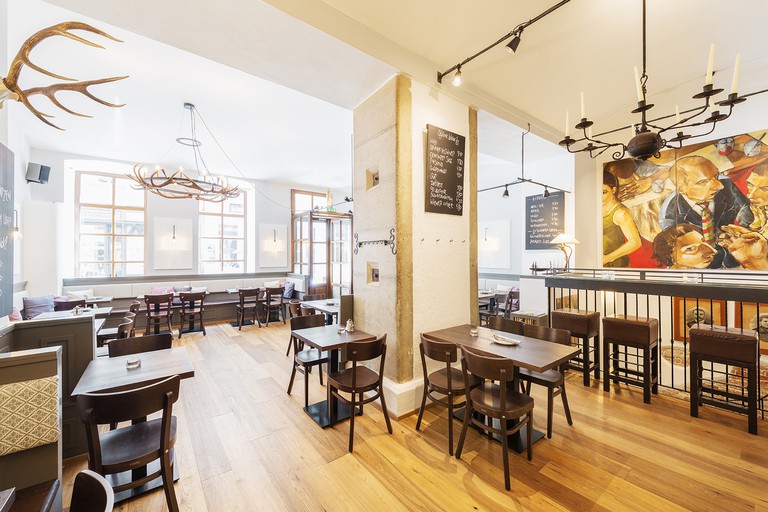 Durchhaus puts a modern spin on Austrian cooking by introducing modern tweaks to traditional recipes. The restaurant uses seasonal ingredients for its menu, which features dishes such as creamy risotto with salmon and tangy lime foam. Inside, Durchhaus is modern but homely, with dark wood furniture and deer antlers decorating the walls and lighting fixtures, while outside a terraced courtyard covered by trailing plants and filled with long family-style wooden tables is inviting during the al fresco-friendly warmer months. “With a good and not too expensive wine list, this restaurant is a winner,” says Hittinger, who orders the beef tartare and, when in season, the roasted goose with red cabbage and potato dumplings. “The cosy atmosphere makes it a place to stay for the whole evening.” 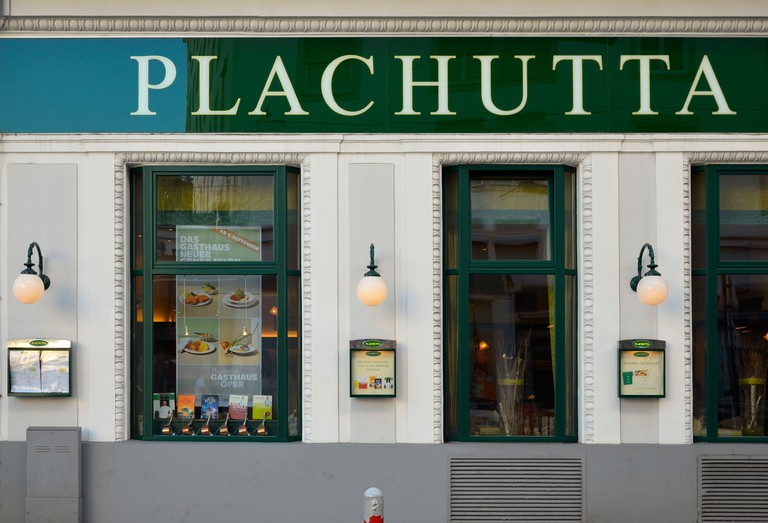 Vienna's Plachutta restaurant is famous for its tafelspitz | © Walter Pietsch / Alamy Stock Photo
Plachutta’s three Vienna locations are famous for their tafelspitz, a boiled beef dish Hittinger likens to a pot roast. “This is a very typical family dish in Austria. It’s the kind of thing we would eat on a Sunday,” he explains. Traditionally tafelspitz is served with creamed spinach and two types of horseradish sauce, plus grated and roasted potatoes. “I was blown away by the simple but super tasty tafelspitz Plachutta serves,” exclaims Hittinger. “Now I recommend this place to everybody visiting Vienna.”
Open In Google Maps
38 Wollzeile, Innere Stadt Wien, Wien, 1010, Austria
+4315121577
Visit Website
Give us feedback 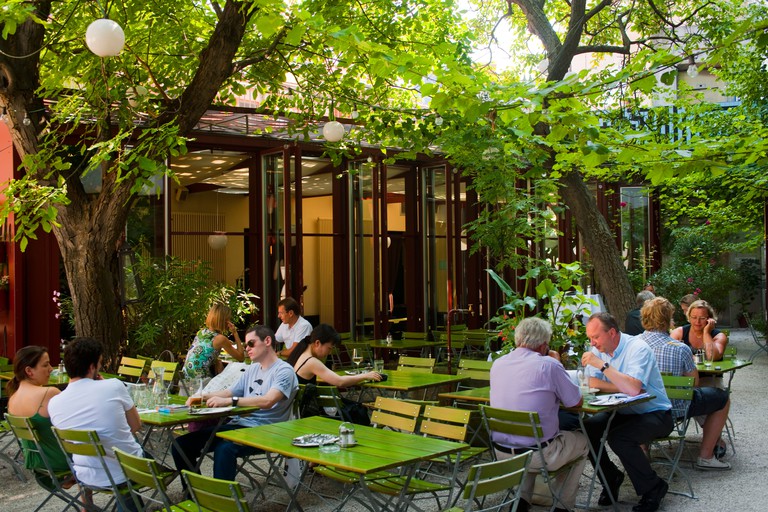 Situated in Vienna’s MuseumsQuartier, a stone’s throw from institutions like the Leopold Museum and the MUMOK (Museum of Modern Art Ludwig Foundation Vienna), you’ll find Glacis Beisl – an aesthetically modern Austrian bistro with a sun-drenched outdoor space shaded by walnut trees. The menu is concise, offering classic dishes like satiating grammelknödel (potato dumplings) with sauerkraut, fried black pudding with red cabbage, and palatschinken (Austrian crêpes smothered in sticky-sweet home-made marmalade). “With their simple but perfect menu and their focus on orange and natural wines,” Hittinger recommends a trip to Glacis Beisl for their Austrian drinks and cuisine. “Pairing the krautfleckerl (pasta with caramelised cabbage) with a glass of pét-nat (short for pétillant naturel, or natural sparkling wine) is simply great.” 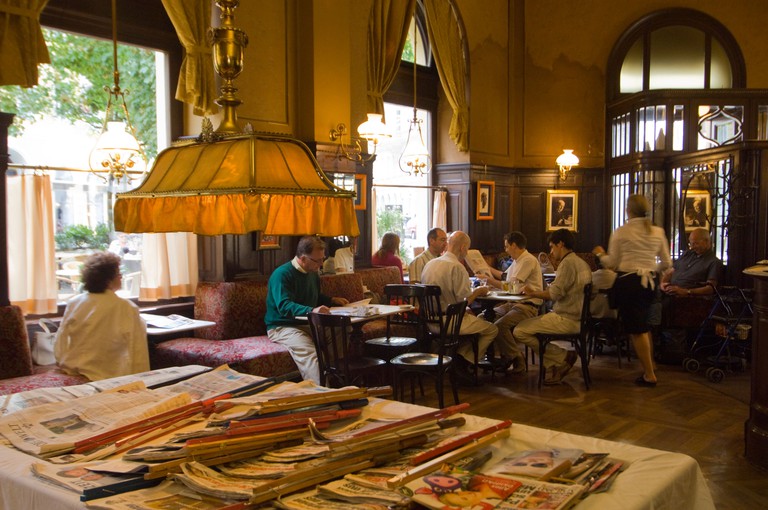 © Hackenberg-Photo-Cologne / Alamy Stock Photo
Hittinger heads to Café Sperl at 10am sharp for their fresh-from-the-oven apple strudel. “The apple strudel will be warm still, and the scrambled eggs with pumpkin seed oil are the best start to the day,” Hittinger says. This historic, family-owned Austrian coffee house opened in 1880 and still retains its old-world ambience, with high ceilings, wood-panelled walls and billiards tables in the back. Coffees here are an indulgent affair: espresso swirled with whipped cream or spiked with liquor, Viennese ice cream blended with cold mocha, and a hot cocoa drink that translates simply as ‘chocolate cream’. If the weather is cooperating, order breakfast on the outdoor terrace.
Open In Google Maps
11 Gumpendorfer Straße, Mariahilf Wien, Wien, 1060, Austria
+4315864158
Visit Website
Give us feedback

Local, seasonal ingredients are the basis of Zum Friedensrichter’s menu. Every food item has been sourced from Austrian producers, even the fish, which the chef buys from fisheries in Gut Dornau, 30 kilometres (19 miles) south of Vienna. The restaurant serves Austrian classics such as beef soup with semolina dumplings and baked pork schnitzel, but an ever-changing specials board chock-full of seasonal specialties will make it difficult to settle on just one thing. Hittinger’s go-to order here is altwiener backfleisch, a rare dish of breaded fried beef that translates as “old-Viennese baked meat,” and which is paired with a creamy potato salad.