The 10 Best Cafés and Coffee Houses in Vienna, Austria 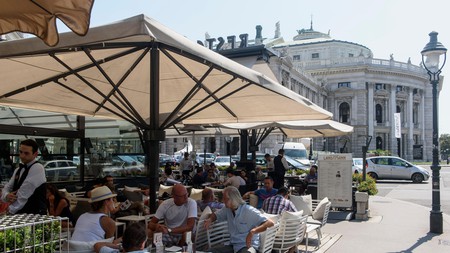 Coffee house culture is important in Vienna, and there’s probably little that sums up life in the Austrian capital better than heading to a coffee shop for cake and a Melange (an espresso with steamed milk, topped with foam). From traditional coffee houses where waistcoat-wearing waiters serve drinks in opulent surroundings to the largest privately owned coffee shop in Europe, these are Vienna’s best cafés and coffee houses.

While coffee plays a major role in many countries, in Vienna, drinking coffee is part of the fabric of social life. So much so that in 2011, Vienna’s coffee houses were listed as an Intangible Cultural Heritage by UNESCO. In the late 19th and early 20th centuries they were at their height of popularity, and became a focal point for intellectual discussion and creativity, welcoming some of the most important writers, artists and scientists of the age.

The oldest café in Vienna dates back to 1683, and there are roughly a thousand in the city these days. While many are long-standing, traditional places, a constant stream of new openings means that there are also more modern places where you can spend hours chatting, working, reading the papers, eating cakes – and drinking coffee. But it’s the traditional cafés that remain the most popular. 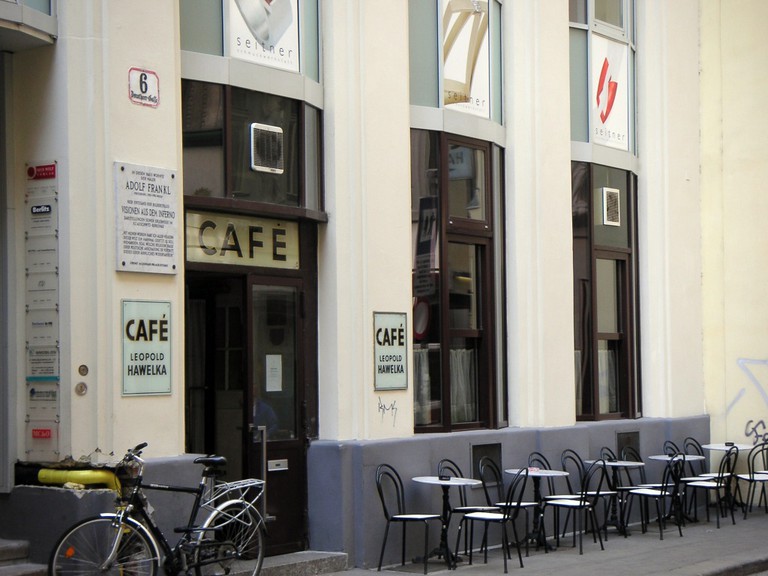 Café Hawelka is located in Vienna’s prestigious first district | © Priwo
Café Hawelka, located in Vienna’s prestigious first district, is so well-loved in Vienna that it has been featured in Austrian documentary films and in songs such as ‘Jö Schau’ (by the late Austrian singer Georg Danzer) and ‘Trans Europa Express‘ by German band Kraftwerk. Opened in 1939 by newly-weds Leopold and Josefine Hawelka, it was especially popular with Austrian poets, musicians and politicians in the 1960s and 1970s. “Hawelka is part of Austria’s hippie past and the spirit – and the interiors – are still there,” says Holzer. The owners worked in the café well into their nineties, and it’s still family-run, with son Günther and grandchildren taking over after their passing. Holzer particularly recommends the café’s signature dish, the Buchteln, which was invented by Josefine and is “a brioche served with custard, traditionally enjoyed around 11pm”.
Open In Google Maps
6 Dorotheergasse, Innere Stadt Wien, Wien, 1010, Austria
+4315128230
Visit Website
Give us feedback 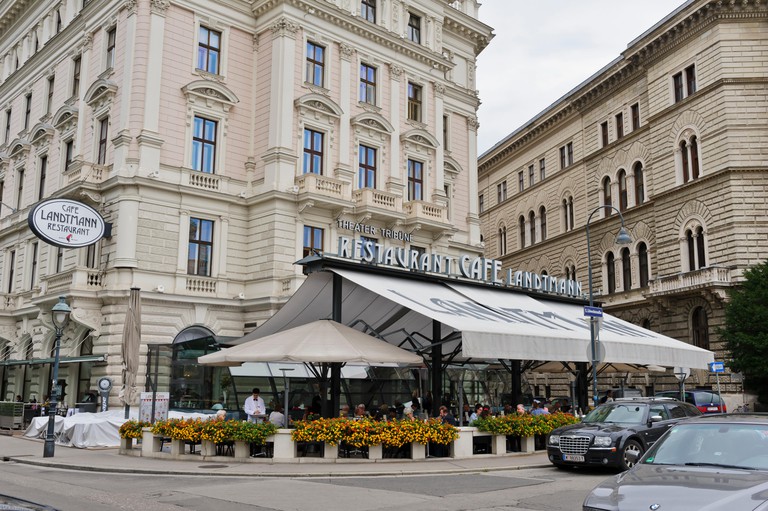 Café Landtmann has attracted famous patrons | © Mo Peerbacus / Alamy Stock Photo
“Café Landtmann attracts a diverse crowd: this is where MPs and journalists debate the latest political developments, tourists rest their legs after visiting the Imperial Palace and students come to study for their exams,” says Schaber. Elegant and cosy, the coffee house is traditionally Viennese in appearance thanks to its wood-panelled walls, dark-wood furniture and white tablecloths. Landtmann dates back to 1873, making it one of the oldest coffee houses in Vienna, and it is housed in an officially listed historical building. Its prime location, surrounded by the city hall, the Burgtheater, the Imperial Palace and the University of Vienna, makes it one of the most popular cafés in town. Try some traditional Austrian sweets here, best enjoyed on the heated veranda.
Open In Google Maps
4 Universitätsring, Innere Stadt Wien, Wien, 1010, Austria
+43124100120
Visit Website
Give us feedback 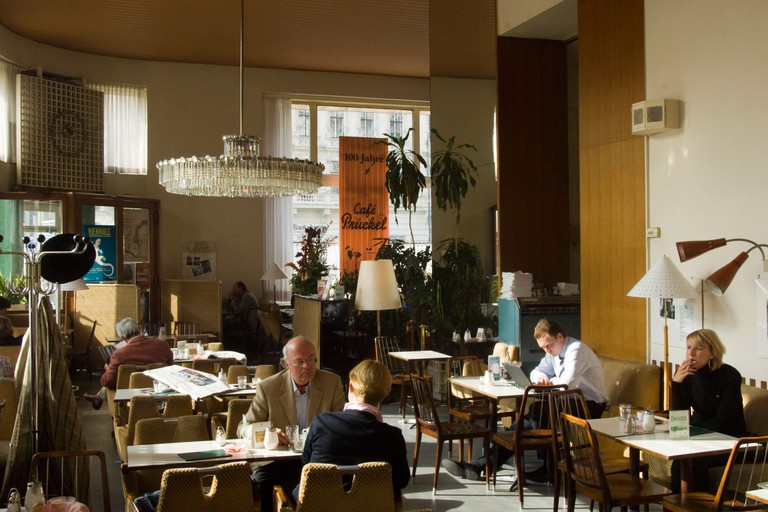 With more than 100 years under its belt, Prückel, located opposite MAK (the Museum of Applied Arts), is one of the most traditional coffee houses in Vienna. But its long history isn’t immediately obvious, as the interior lacks key elements associated with Viennese coffee houses, such as marble tabletops and stucco ceilings. It opened in 1903 and underwent an extensive refurbishment in the 1950s, but hasn’t changed much since, with its olive-green armchairs, bamboo desks, lamps and a large chandelier. “Prückel has a lovely ambience; it’s like stepping back in time,” says Brandlmaier. “The waiters are typically Viennese, and the apple strudel with whipped cream is the best in town.” 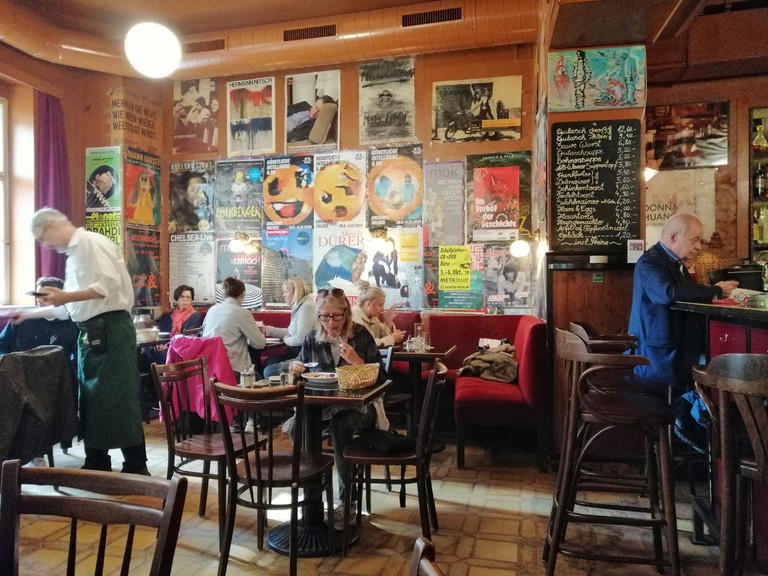 Alt Wien, located a stone’s throw from St Stephen’s Cathedral, opened in 1922 and was bought by Leopold Hawelka, the original owner of Hawelka, a decade later. With its walls plastered with posters, dimmed lights and generous opening hours, it resembles a classic coffee house, an aspect that is also reflected in their traditional food selection, which goes way beyond cakes and sandwiches. “Alt Wien probably has the most extensive menu of all coffee houses in Vienna,” explains Holzer. “Their Viennese schnitzel, which goes for a pleasantly moderate price, is one of the best in the city.” Another guest favourite is the goulash. 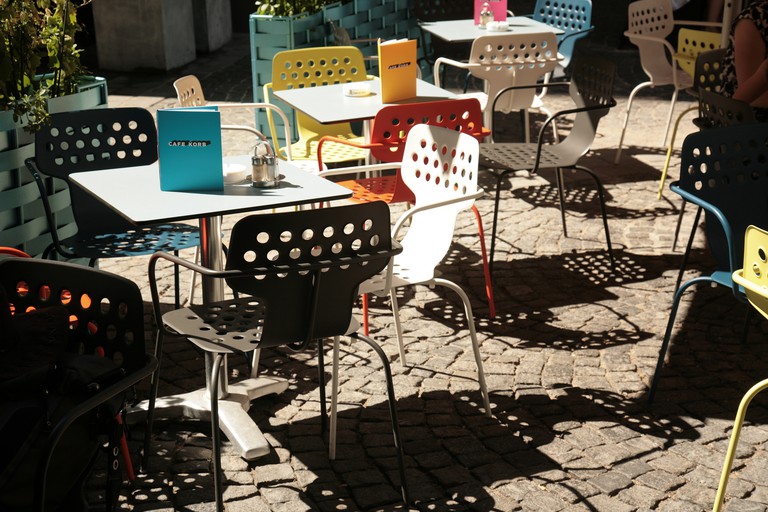 Café Korb, near St Stephen’s Cathedral, opened in 1904, with Emperor Franz Joseph I the most prominent name on the opening night guest list. Soon, psychiatrist Sigmund Freud and artist Andy Warhol became regulars here. While the coffee house nowadays has an undeniable 1960s style, black-and-white pictures on the walls pay tribute to the early days. There’s also a bowling alley downstairs that has been around for decades. Although the interior is quite small, Korb is full of life at any time of the day. “Owner Susanne is a Viennese legend,” says Brandlmaier, who is a fan of the rustic café’s breakfast. “The butter bread with chives and boiled egg served in a glass, served together with a glass of Prosecco, is a must.”

Housed inside Palais Ferstel on high-end Herrengasse, Café Central has been an institution in Vienna since 1876. In the old days, it served as a second home for Vienna’s poets and intellectuals, with frequent visitors including Sigmund Freud and architect Adolf Loos, and its appeal remains to this day. “Central is an architectural sensation. With its decorated vaults, magnificent arcades and pillars, large lamps and chandeliers, it has a museum-like vintage flair that appeals to all,” says Schaber. Café Central has a large selection of coffees, sweet treats and Viennese dishes such as schnitzel and Tafelspitz (veal or beef boiled in broth, served with potatoes, vegetables and a mix of minced apples and horseradish). It’s rather on the pricey side, but the atmosphere makes up for it.

This café on Wollzeile road opened its doors in 1923 but its original establishment dates back to 1875. Founded by Hans Diglas, who welcomed Emperor Franz Joseph I as his very first guest, the coffee house with his surname has been passed down the generations. “The atmosphere is elegant yet cosy,” says Brandlmaier, who recommends the sweet treats at Diglas. “They are traditionally Viennese and remind me of my Grandma’s. Order coffee and a cake, get a newspaper and allow yourself some time to take in the atmosphere.” If time allows, come in the early evening to listen to some live piano tunes.

Schwarzenberg at Ringstraße, near Stadtpark, has all the features of traditional coffee houses such as Landtmann or Prückel, yet has never made it onto the tourist map. “It’s one of the very few Viennese cafés almost exclusively frequented by locals,” explains Holzer, describing it as “the sort of place where you can read all the papers for hours over just one coffee without anyone bothering you to order more”. Dating back to 1861, the café still features interiors typical of the interwar period, including the café’s original tables, marble cladding and painted ceiling. Holzer suggests ordering their most popular dish: “The beef goulash is a dream!” 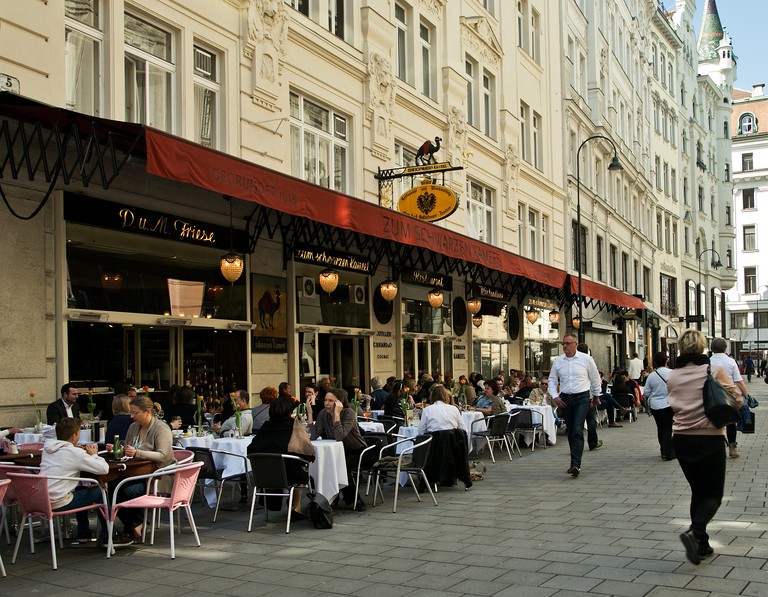 When Café Museum opened its doors in 1899, many Viennese sniffed at architect Adolf Loos’s simplistic style, which lacked all the plush details and chandeliers typical for that era. However, artists loved the café, and thanks to its proximity to the opera house it soon became the place to be for the cultural elite. “The café has undergone a series of refurbishments, some of which led to it losing its loyal local following. However, it is now back to its former glory, with a mix of original and modernised interiors attracting both locals and visitors,” says Schaber. Treat yourself to a Viennese apple strudel before heading to nearby Kärntnerstraße, Vienna’s most famous shopping street. 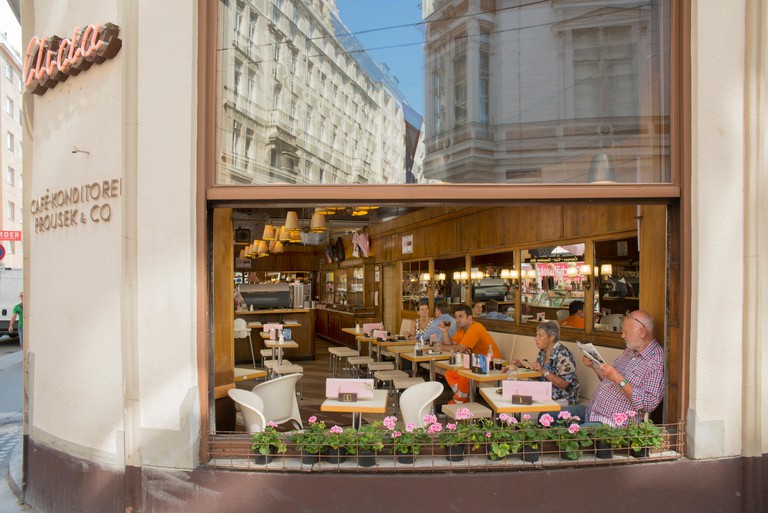 Aida, easily recognisable by its striking pink facades, is a franchise with around 30 coffee houses spread around Vienna. The one next to St Stephen’s Cathedral ranks among the local favourites. “Their interiors keep changing, but the original 1950s flair remains,” says Holzer, praising the reasonable prices, the great coffee selection and cakes. “The sweet treats are all fantastic, but my all-time favourite is the nut sticky bun.” Aida was founded by Czech-born Josef Prousek in 1913 and is considered the largest privately owned coffee shop and confectionery producer in Europe, making three tons of cakes and pastries, seven days a week.