German in Austria: A Guide to the Austrian Language 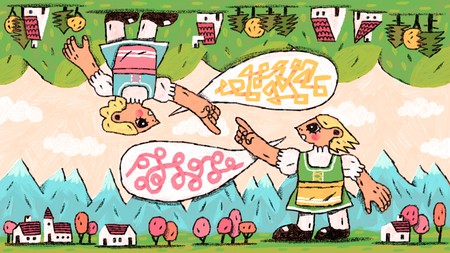 Although Austria and Germany officially share the same language, there are considerable differences in the words and phrases spoken in each country, as well as how people use them in everyday life.

Austrian writer Karl Kraus (1874-1936) nailed it when he said that the main thing that distinguished Germans from Austrians was their common language. While the official language of both countries is derived from the West Germanic language that dates back to Roman times and is also spoken in parts of Switzerland, Italy, Belgium, Luxembourg and Liechtenstein, the difference in both use and terms can often cause misunderstandings. Indeed, Austrian German, with its many dialects, is so diverse that it is now the only pluricentric language officially recognised by the EU. And while in writing and formal contexts, the Austrian ‘High German’ is fairly similar to the German version of the same, there are significant variations in informal conversations.

A great way to get an insight into the language spoken in Austria is to listen to Austrian dialect bands such as Wanda, Seiler & Speer and Krautschädl. But for a brief introduction to some popular Austrian-language phrases, Culture Trip has chosen a selection of key terms and expressions.

Although it’s extensively used in Austria, this sentence will leave most Germans and Swiss Germans utterly confused. Das geht sich aus or the even more popular Das geht sich nicht aus essentially means that something is (or isn’t) possible. Depending on the context, the reason for its feasibility may be time, money or physical space. While the phrase’s origin is not entirely clear, it may have derived from the Czech to se nevyšlo or to se nepovedlo.

When translated, this phrase means ‘Only goulash tastes good when heated up twice.’ However, in Austria, the expression is widely used when discussing relationships – and break-ups. It means ‘you need to let go’ and could allude to the past in general or an ex or an on-again, off-again partner. As for the beloved national dish in the phrase, it is widely believed that goulash does taste great when heated up for the second time – it’s even better (unlike most second attempts in love). 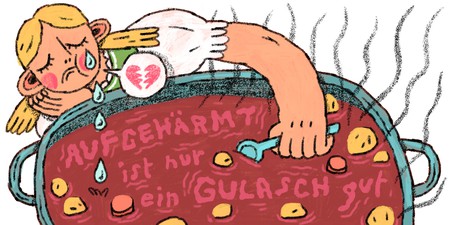 Leiwand is frequently used in informal conversations in Vienna and is a positive adjective – the equivalent to ‘great’, ‘amazing’ or ‘awesome’. Anything can be, look or taste leiwand, from a person to a song, a cake or your newest pair of jeans. It is said to originate from the word leinwand, meaning ‘canvas’, which was of high value in Austria in the Middle Ages, especially as part of a dowry. Vienna even served its own ‘canvas beer’ called Leinwandbier in the 15th century, which was brewed in the Bürgerspital (a hospital) – which seems pretty leiwand. At the time, to call something leiwand in Vienna was to say that it was as good as the said beer.

Schmäh means ‘trick’, ‘joke’ or ‘fib’ in Austrian German and is also used to describe Viennese humour, which is very specific to the city and has a reputation for being particularly sarcastic and morbid. Schmäh führen, a very common phrase in Austria that is pretty much unknown in Germany, can be best translated as ‘joking’. There are different theories about its origination. One hypothesis is that it dates back to the 11th to 14th centuries when smæhe was a popular term for ‘insult’ in Middle High German (the German language spoken in the High Middle Ages), while another links it to the word schmee (‘lie’) from the Middle Ages or the Yiddish term schemá (‘narrative’).

Originally a Viennese slang term popular with teenagers and millennials, Oida is a modern phrase that has since spread to all parts of Austria and age groups (but not across the borders to either Germany or Switzerland). The word is so heavily used in informal conversations these days that you might even see it printed on T-shirts. Oida essentially means ‘Dude!’, but it is also used to complain about something or to express general displeasure or dismay about a situation, a person or someone’s bad luck.

This one-word phrase means ‘Ready?’ or ‘Are we ready?’ and is the Austrian equivalent to the German Fertig? and Seid ihr fertig? It is often followed by Ja. Gemma!, which can best be translated as ‘Yes, let’s go.’

Taugen originates from the Middle High German words tougen and taugen and means ‘useful’. However, in Austria and Bavaria, the phrase is commonly used to indicate appreciation for something. Das/Der/Die taugt mir can refer to things as well as people, so you can use it to express pleasure with everything from music to your cat, a particular fashion style or a new love interest. 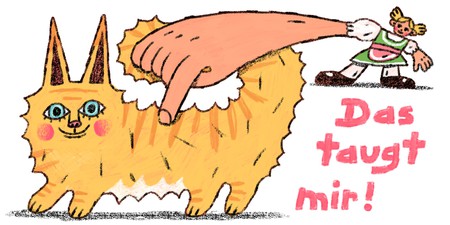 While Austrians generally tend to shorten German phrases and words, in contrast, Na no na net is the long version of a simple ‘yes’, ‘obviously’ or ‘of course’. In Germany, the equivalent would be something like klar. Na no na net is mainly used in and around Vienna to emphasise that something that had just been said is very obvious; the phrase is often paired with the rolling of your eyes.

Heuer, meaning ‘this year’ in Austrian German, is a simple and very common term that tends to confuse Germans as it simply doesn’t exist in the language spoken in Germany – except for in parts of Bavaria. The word has its roots in the Middle High German hiure and the Old High German (the earliest version of the German language) hiuro and hiuru and basically had the same meaning in the 11th century that it has today. You might also notice that wine taverns are called Heurige in Austria. This name is an abbreviation of heuriger Wein, meaning this year’s wine.

Deppert is an adjective that means ‘stupid’ or ‘idiotic’ in the Austrian dialect, so saying Bist du deppert is to call someone an idiot. However, in everyday slang, the phrase is also used to express amazement at something or someone, similar to the English words ‘wow’ or ‘awesome’. The expression is especially prevalent in eastern Austria. Be careful with using the phrase in Germany, though, as people might take it literally and get offended.

Like it or not, smoking is still widespread in Austria, so it probably doesn’t hurt to know the correct Austrian-language term for cigarettes: Tschick. According to one theory, the dialect word originates from Slavik languages, in which the ‘c’ in ‘cigarette’ is pronounced as ‘tsch’. Another theory links the word to the Italian cicca (‘fag’). Tschick can also be used as a verb, tschicken, meaning ‘smoking’.