The magnificent Gothic edifice that is St Stephen’s Cathedral, the mother church of the Roman Catholic Archdiocese of Vienna, is one of Vienna’s most culturally significant landmarks. It’s also an important heritage site, and is respected across Austria and indeed throughout the world.

Wander through Vienna’s historic centre today, and among the many impressive architectural sites – including the neo-Gothic Rathaus and Baroque monuments, palaces and churches – one architectural wonder stands high above the rest: St Stephen’s Cathedral. Today the cathedral is something of a symbol of Vienna, with its stunning mosaic roof and the sheer height of its south tower making it one of the most recognisable attractions in the city. Culture Trip delved into the facts to learn more about its history. 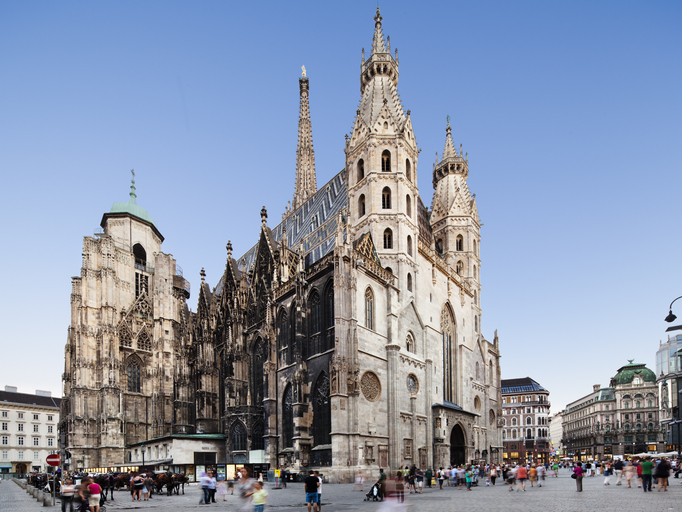 When was St Stephen’s Cathedral built?

The construction of the original church commenced around 1137, on a site that is believed to have been an Ancient Roman cemetery. This first building was finished in 1160, but it was entirely ravaged by a large fire in 1258, leaving very little remaining besides the stone foundations on which it stood. The church was reconstructed using two surviving towers and was once again consecrated in 1263. Since then, St Stephen’s Cathedral, or Stephansdom to give it its German-language title, has continued to gradually grow and reshape over time, with large sections rebuilt after damage caused during WWII, and various towers, extensions and decorations added over the centuries.

The exterior of the cathedral is made up of limestone walls that have been adorned with intricately detailed statues. The design is an amalgamation of Romanesque and Gothic architectural styles. But the cathedral’s most striking feature, which is immediately eye-catching, is the decorative, coloured tile roof, featuring a striking diamond pattern in white, yellow, green and brown. The mosaic on the south side of the roof features an intimidating Imperial double-headed eagle that pops out in black from the 230,000 tiles that make up the ceramic mosaic spread. On the north side, the coats of arms of the City of Vienna and the Republic of Austria can be seen.

A prominent feature of St Stephen’s Cathedral is its towers, which seemingly scrape the sky with their mottled, ornate spires. The tallest, known affectionately as “Steffl”, is the south tower, which stands autocratically at a staggering 136 metres (446 feet) high and has become an icon of the city’s skyline, visible from almost anywhere in Vienna. Inside the north tower hangs the Pummerin, one of Europe’s largest free-swinging bells, which is etched with images of the Virgin Mary. Legend has it that Beethoven‘s deafness first became apparent to him when he observed birds flying away from the north tower yet could not hear the sound of the Pummerin ringing.

Those who make the pilgrimage up the 343 steps to the peak of the south tower, to the viewing room, will be rewarded with a dramatic view from St Stephen’s Cathedral of Vienna below – an especially incredible sight on a clear day with a blue sky.

What happened to St Stephen’s Cathedral during World War II?

During the final months of World War II, St Stephen’s Cathedral was saved from certain ruin when Wehrmacht Captain Gerhard Klinkicht ignored orders from city commandant Dietrich to “fire a hundred shells and reduce it to rubble.” Although the cathedral managed to avoid bombing, sadly, this wasn’t the final threat, as in April 1945 civilians set fire to shops in Vienna’s historic centre to protest against the invading Soviet Army. Flames from the fires spread to the cathedral’s roof, causing the original Gothic timbered-style roof to collapse. Luckily, some of the most important artefacts survived, including the pulpit and Frederick III’s tomb, and reconstruction started very soon after the end of the war. The cathedral was restored to its former splendour and partially reopened in 1948 before being completely open to the public once more in 1952. 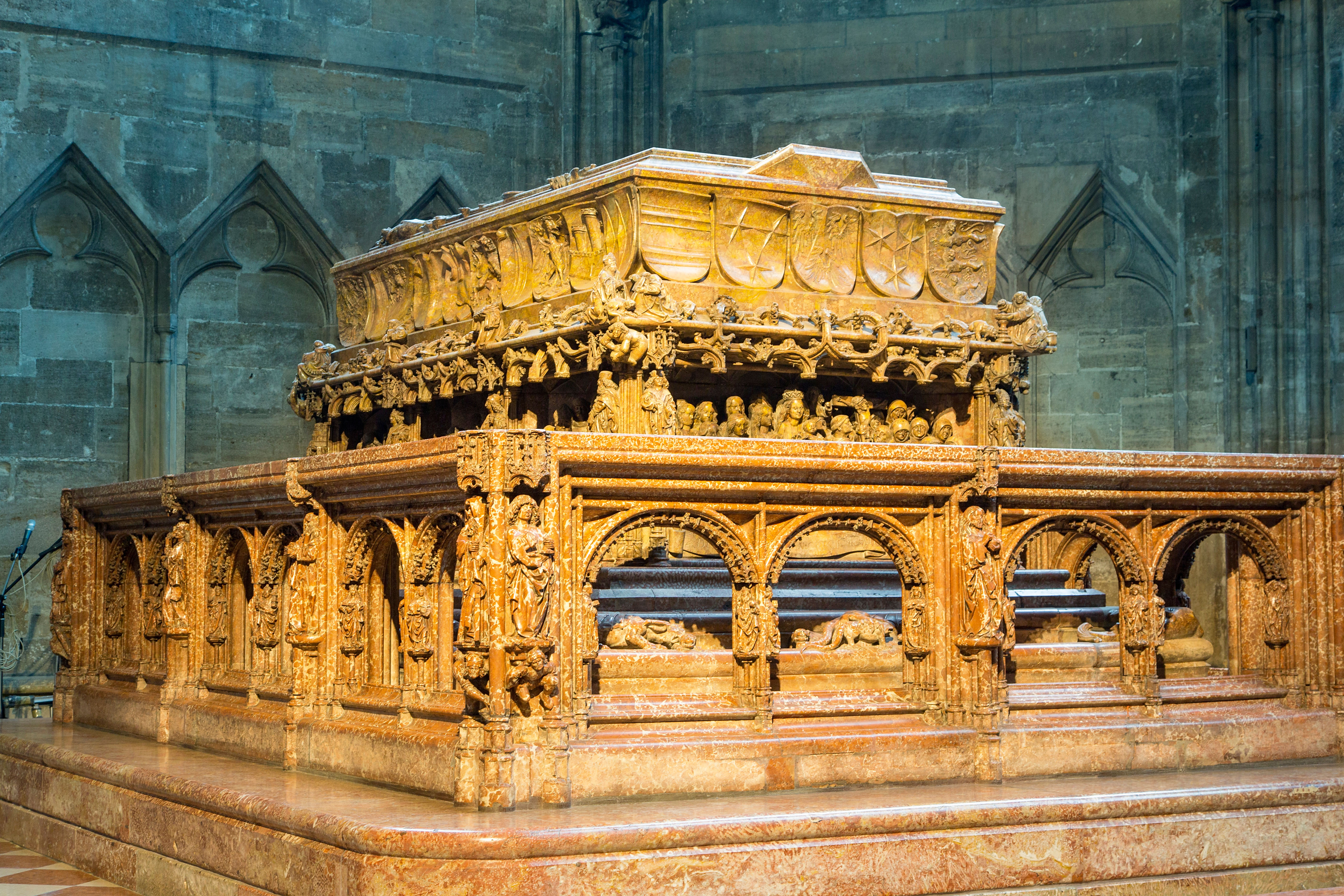 What does the interior of St Stephen’s Cathedral in Vienna look like?

Inside St Stephen’s Cathedral, ornate Gothic columns supporting the roof tell tales of the Christian saints, with countless solemn stone faces peering out from high up the walls. Below, the cathedral boasts 18 altars, but the centrepiece of them all is undoubtedly the High Altar, which portrays the stoning of the cathedral’s namesake, Saint Stephen. The High Altar was built in the 1640s using marble from Styria and Tyrol in Austria, as well as from Poland.

The lavishly decorated cathedral is filled with artistic delights, including a late-Gothic pulpit, which is a masterpiece in stonework. Interestingly, the pulpit has been placed in the nave rather than in the chancel, a forward-thinking move that allowed more people to hear the sermon. There are also numerous formal chapels, including the Chapel of the Cross, where Prince Eugene of Savoy was buried, and where Mozart‘s funeral took place. Intriguingly, the Christ depicted above the altar in the Chapel of the Cross has a beard made, rather spookily, from real human hair (be aware that this chapel is not open to the public).

One of the most important items in the cathedral is the Maria Pötsch Icon, an icon of St Mary with Jesus depicted in the Byzantine style. It comes from the Hungarian Byzantine Catholic shrine Máriapócs, but in 1696, King Leopold I ordered that it be moved to Vienna after the icon was said to have been seen crying real tears.

An impressive organ now stands proudly in front of the stained-glass window that decorates the nave. St Stephen’s Cathedral is said to have had an organ as far back as 1334, but the original organ (which had been damaged by the 1945 fire) was replaced with a more modern version. 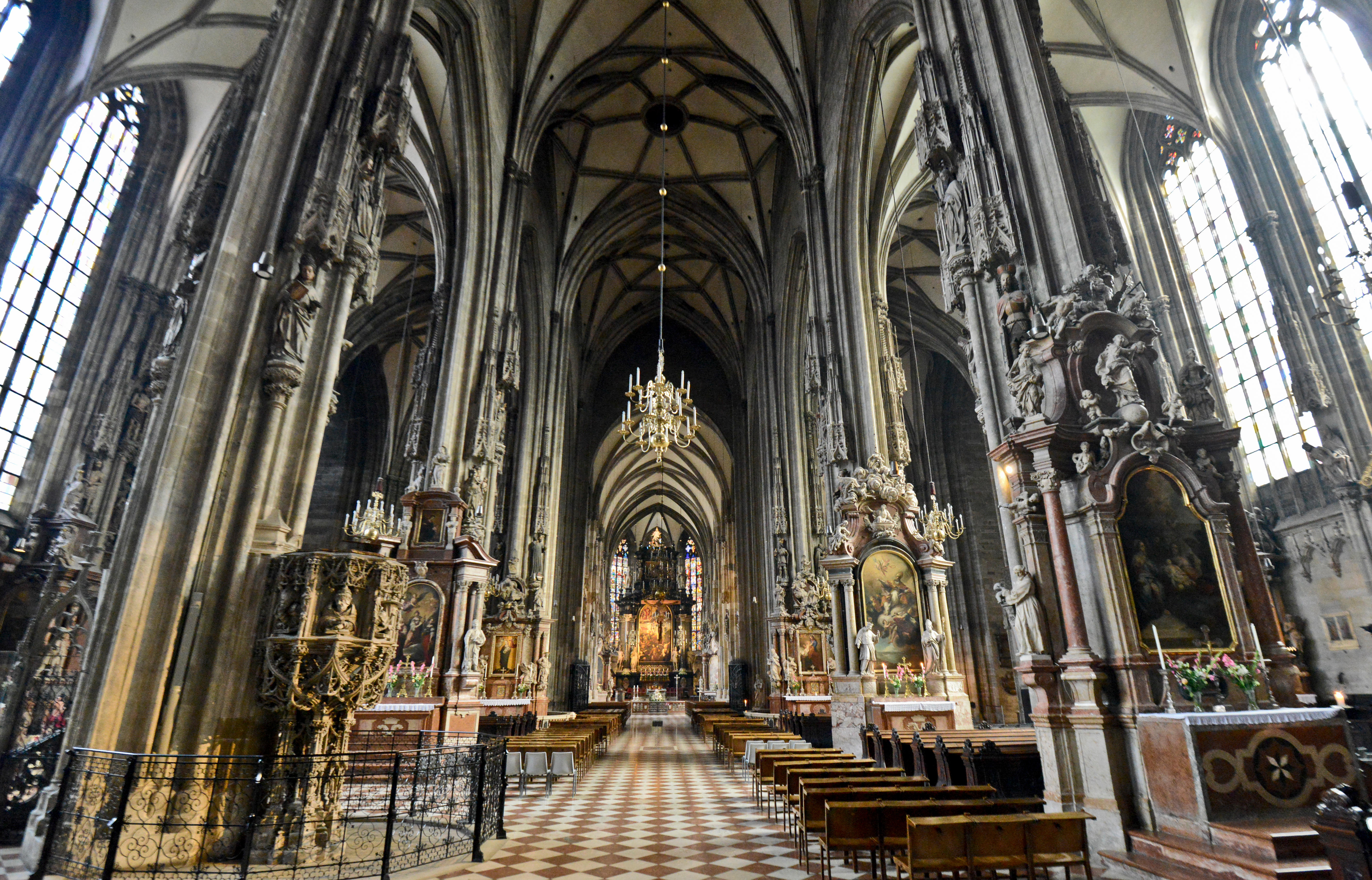 Who is buried in St Stephen’s cathedral?

Beneath the floor lie St Stephen’s Cathedral’s catacombs, chambers containing the remains of around 10,000 deceased, which are arranged in parts in tiers stacked on top of one another, a part of the church that can only be seen by guided tour.

Some of the most notable names buried in the church include Elisabeth of Austria, Queen of France; Dutch Golden Age painter Jan van Hoogstraten; Austrian historian, scientist and diplomat Johannes Cuspinian; as well as former Archbishops of Vienna. It has also been the site of funerals to greats of the past, such as composer Antonio Vivaldi, Formula One champion Niki Lauda, and Habsburg monarchs such as Emperor Franz Joseph I and the last Empress of Austria. On a more celebratory note, Joseph Haydn and Wolfgang Amadeus Mozart are just two of the important figures to have been married here.

What events and tours does St Stephen’s Cathedral organise?

One of Austria’s proudest historical monuments, St Stephen’s Cathedral is an incredible sight to behold and the most impressive of the churches in Vienna. Open year-round to the public, the cathedral hosts many events throughout the year, including its popular Christmas Concerts. Various guided tours in English are available, and it is one of Vienna’s most popular landmarks, attracting over one million tourists every year.

How can I buy tickets to St Stephen’s Cathedral?

Tickets to the interior of St Stephen’s Cathedral cost €6 (£5), which includes an audio guide, while there are additional costs for other activities like visiting the catacombs; seeing the Steffl tower; taking the lift to the top of the north tower; and seeing the cathedral treasure. Tickets can be booked online in advance. Mass is held regularly at St Stephens, and mass times and details of other church services can be found on the church website (in German only).