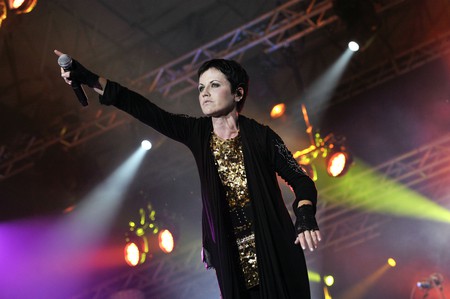 The Cranberries’ singer-guitarist Dolores O’Riordan, who died at the age of 46 on January 15, wrote one of the greatest protest songs of the modern-rock era.

“Zombie” was the Irish musician’s response to the Provisional IRA’s second bomb attack of Warrington in Cheshire, England, within the space of a month in 1993. The bombing, in a busy shopping area on March 20, caused the deaths of three-year-old Johnathan Ball, and, five days later, of 12-year-old Tim Parry. Of the 54 other people injured, 32-year-old mother of two Bronwen Vickers had to have a leg amputated.

The Cranberries—O’Riordan, guitarist Noel Hogan, bassist Mike Hogan, and drummer Fergal Lawler—were making a transition to a darker, harsher sound when they recorded “Zombie,” which became their finest 5 minutes and 6 seconds. Noel Hogan plays mostly rhythm guitar on the song, building the eerie, grungy soundscape, and it is O’Riordan who punches out the riffs.

It’s a song ablaze that—unlike other songs about the Irish Troubles, such as Stiff Little Fingers’ “Alternative Ulster” (1979), The Police’s “Invisible Sun” (1981), and U2’s “Sunday Bloody Sunday” (1983)—offers no palliatives and no closure. It’s all the more powerful for suggesting that a society that can’t prevent the military murders of children is a society of zombies.

The song instantly sets a mood of fear. A few seconds of downbeat electric strumming, which sound as if they were recorded in an echo chamber, are interrupted by a hiss, a flick across the cymbals, and a thunder of drums that ushers in a wash of fuzzy guitars covering a barely audible sullen riff. As the wall of sound thins, O’Riordan picks out a guitar line—slow, sinister, a bit scratchy—that amps up the ominousness. She starts to sing, or half-chant, in a honeyed undertone, a little coy, like a child singing of a wonder, as if she has been possessed by the dead children she’s singing about.

The lyrics are initially a little nonsensical and you think O’Riordan can’t fully articulate what she means: “Another head hangs lowly/ Child is slowly taken/ And violence causes silence/Who are we mistaken?”

Silence of the dead

The “violence-silence” rhyme, which O’Riordan repeats later on, forces “silence” awkwardly into the song. It could be the silence of the dead or the aghast silence of those mourning them. “Who are we mistaken” should be “why are we mistaken?”—for sanctioning violence.

O’Riordan’s becomes shriller when she sings, “But you see, it’s not me/ It’s not my family/ In your head, in your head, they are fightin,’” She’s examining her and our conscience, asking us to empathize with the mourners even though it is not her family that has been bereaved. The phrase “in your head” here refers to her head, in which she can’t explain what justifies sectarian violence and the killing of children as collateral damage. 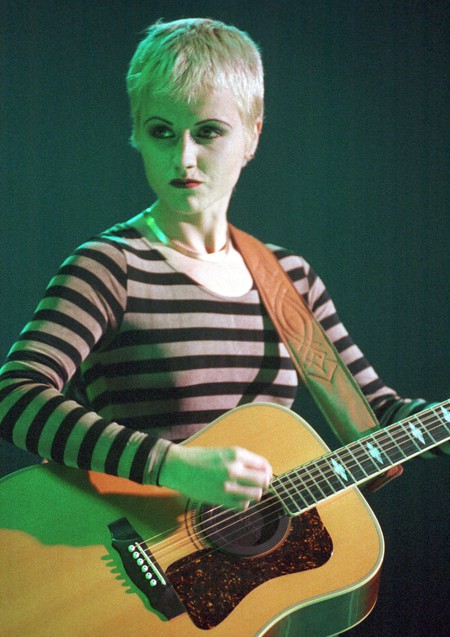 Certainly O’Riordan holds her head—gold wig and gold-painted face—in anguish in the song’s video, which combines Northern Irish images of the band performing on a piece of wasteland, slogan-daubed walls, boys playing and fighting, and British soldiers on patrol, with a baroque religious tableau of O’Riordan and teenage cupids standing before a wooden cross.

Conventional tanks weren’t deployed by the British in Northern Ireland during the Troubles, only Centurion AVRE demolition vehicles and armored cars like Alvis Saracens and Humber Pigs. “Tanks” invokes bigger 20th century conflicts; O’Riordan could be singing about the battles of the Somme or the Bulge. The point she’s making is that wars go on and on and on, almost monotonously, no matter how barbaric and insane they are.

The chorus follows—O’Riordan shouting “in your he-a-a-d, in your he-a-a-d…” She’s not singing about anyone’s head anymore, but the whole wide world—and it could be in flames. Then comes a punch in the gut. With the grungy anthem-ness of the song at peak loudness, O’Riordan snarls the word “zombie” three times; the word first comes out of nowhere after a minute and 40 seconds. She doesn’t pronounce it “zombee,” but “zomb-ih;” it’s not the only word in the song that’s arrested or mangled because of the singer’s incomprehension. Some kind of inner disintegration is taking place.

After asking the combatants the rhetorical question, “What’s in your head?”, O’Riordan sings “zombie” a fourth, fifth, and sixth time, when it comes out as “zomb-ih-ih-ih-ih-oh”— a foreshadowing of the agitation that swallows her vocals for good another minute and 40 seconds later.

Why “zombie”? The video ends on a shot of a face of boy who may be dead on the streets of Belfast after his and his friends’ war game goes wrong. The song, you could argue, reanimates the children whose deaths inspired O’Riordan to write it. More likely, she’s singing “zombie” with sardonic fury, targeting the people who carry out killings as duty, as if they haven’t got consciousness or wills of their own, like the Irish and British hitmen who mechanically carry out routine assassinations throughout Alan Clarke’s 1989 short film Elephant.

After the chorus, there’s a lull, The Cranberries putting the song’s own violence on hold, pending the next dulcetly-sung verse and the next ferocious onslaught. O’Riordan chants “du du du du” four times—it sounds like she’s imitating a pipe organ—and then repeats the original sinister guitar line as a warning.

Like the first verse, the second verse expresses its sentiments clumsily. In its awkwardness, “Another mother’s breakin’/ Heart is takin’ over” echoes the first verse’s “Another head hangs lowly/Child is slowly taken.” The lines “When the violence causes silence/ We must be mistaken” sound at first like a too obvious thing to say this far into the song.

In her posthumous comments on O’Riordan on National Public Radio, the rock critic Evelyn McDonnell allowed that The Cranberries’ leader had a certain naivety. She was right, but that naivety serves a song that’s an unfiltered reaction to a tragedy. It goes with “Zombie”’s primal fury; slicker lyrics would have diluted the song’s rawness.

Next comes a history lesson. In the second pre-chorus, O’Riordan is weary and plaintive when she sings, “It’s the same old theme/ Since nineteen-sixteen/ In your head, in your head, they’re still fightin.’” She is saying that the 1916 Easter Rising—the week-long rebellion of Irish nationalists against the the British government, during which at least 485 people died—is still being fought during the Troubles, which began in 1968 and continued for four years after The Cranberries issued “Zombie” in September 1994. Dead: 3,532. Injured: over 47,500.

The chorus comes crashing in again. This time, O’Riordan clearly addresses “What’s in your head?” to the perpetrators of violence—“Are you mad?” she is asking them. And this time she can’t finish the last repetition of “zombie.” It dissolves in a howl of inarticulate, spluttering rage and grief—”Zomb-ih-eh-eh-eh-oh-oh-oh-oh-oh-oh-oh-ey-ya-ya-ya-yow,”

O’Riordan is done with the singing—she’s exhausted and she’s all out of words and ideas and patience—but there’s still a minute and a half of the song to go. 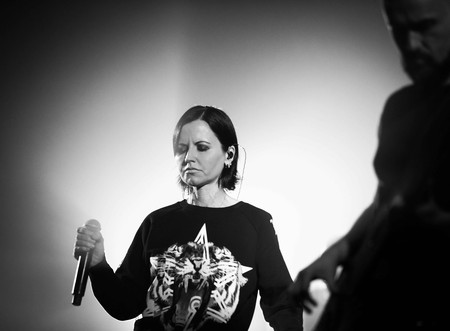 Mandatory Credit: Photo by James Shaw/REX/Shutterstock (8826071t) Dolores O'Riordan The Cranberries in concert at The London Palladium, London, UK - 20 May 2017

A little spent, the grungy guitars continue on for a moment, but just when you think the band has emptied itself out, Mike Hogan’s bass fills the void, the chords sounding like footsteps—the footsteps, perhaps, of the assassins stomping to the cars where they shoot the occupants in Elephant.

It ushers in the sinister guitar line, played for the third time by O’Riordan. This time it doesn’t slip away because drums larrup it into an extended metallic riff—bleak, bellyaching, scorching—a little like the solo at the end of Radiohead’s “Lucky” (1997), only murkier. It’s “Zombie”’s crescendo, and it intensifies the notion that the song is a dirge—albeit one full of drama.

When the riff’s done, the bass picks up the slack again and the song rumbles on with more thudding “footsteps” backlit by tambourine and percussion. It sounds like they may never end, but as a piercing note rings out (it could be feedback), Lawler plays a concluding rataplan on his drums, and “Zombie” halts.

Except that, for hours, weeks, years after you’ve stopped listening to it, you might find that The Cranberries—“in your head, in your head”—are still playing it.