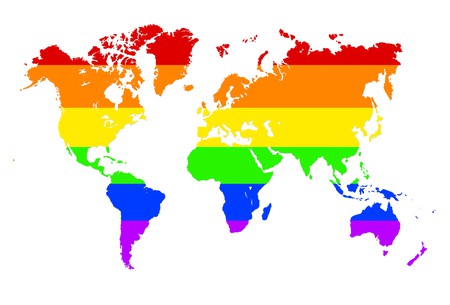 It’s pride month. Regardless of your race, gender, or sexual orientation, it’s a time to celebrate diversity and cultural values – how culture trippy is that?

In a month devoted entirely to celebrate equal-rights, development and just being proud of who you are, there’s oodles to celebrate in terms of LGBTQ rights. Ireland has an openly gay prime minister, Luxembourg has a first husband, and just the other day, Germany said yes to same-sex marriage. That’s progression, right?

So far, there are exactly 23 countries around the world that have legalised same-sex marriage. However, in 75 other sovereign nations, marriage between LGBTQ couples is still illegal, and in eight of them, homosexuality is still punishable by death.

The International Lesbian, Gay, Bisexual, Trans and Intersex Association (ILGA) recognises this struggle, and every year releases a report that showcases the human rights of LGBTQ individuals around the globe.

The handy little map created by the organization below shows all of this year’s findings, focusing particularly on nations where same-sex marriage is still illegal. 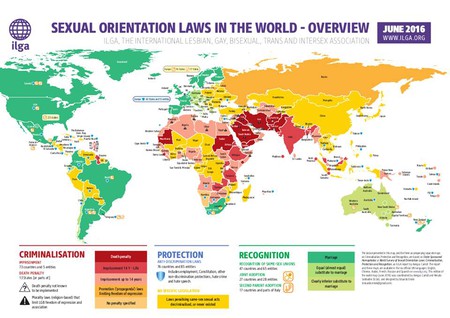 A staggering 40% of the world’s population still live in countries where people can be prosecuted on the basis of their sexual orientation, and more than 400 million, reside in a state where being gay is punishable by death.

It looks like there’s still a little more work to be done.

Love maps? This one shows Europe according to Europeans!