These Are the Best Train Journeys in the World 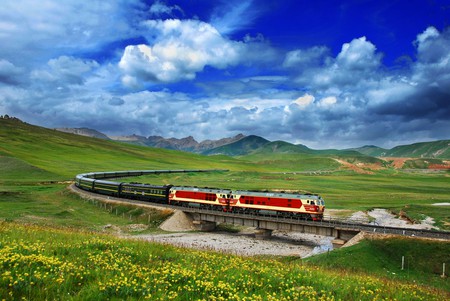 It’s said that it’s all in the journey, not the destination – and while this is hard to apply to flying, it certainly is the case with train travel. Nothing tops the romanticism and window-side sightseeing opportunities of a train ride. Interest piqued? These are the greatest train journeys around the world. 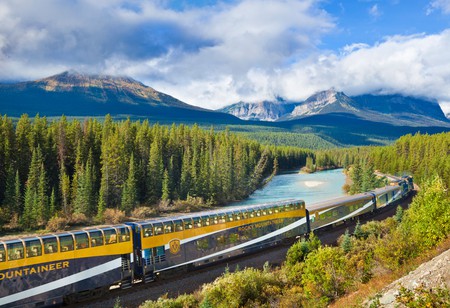 Covering the spectacular scenery of southern British Columbia between Vancouver and Banff, the Rocky Mountaineer’s First Passage to the West is one of the most picturesque train rides in Canada. Leaving the cosmopolitan coastal city of Vancouver behind, passengers are treated to brilliant sights from the comfort of luxurious carriages, including the wild waters of Hell’s Gate in Fraser Canyon and steep tracks running alongside the Thompson River. The journey starts with an overnight stay in the lakeside city of Kamloops, before rising over the Canadian Rockies and arriving at blissful Banff. 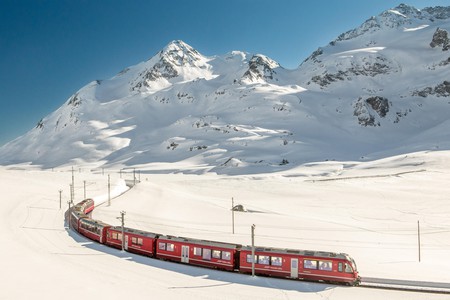 Connecting the two most picturesque mountain resorts in Switzerland – Zermatt and St Moritz – the Glacier Express is the most relaxing way to enjoy the magnificent scenery of the Swiss Alps. Travelling eastwards from Zermatt, the day-long trip covers 91 tunnels and 291 bridges as it rolls past the alpine meadows, pristine mountain lakes and picture-perfect hamlets of southern Switzerland. Highlights of the journey include Oberalp Pass – the highest point on the ride at 244m (6,706ft) – and the Landwasser Viaduct — a magnificent six-arch structure standing at around 61m (200ft) and plunging into a tunnel cut straight into the mountainside. 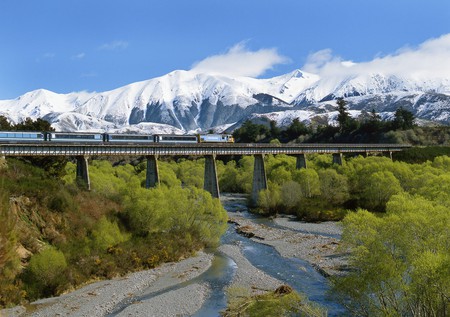 Passengers are treated to a range of scenery onboard the TranzAlpine, which travels from Christchurch to Greymouth | © agefotostock / Alamy Stock Photo

All aboard the TranzAlpine for a stage-side seat to the most dramatic landscape in New Zealand — the Southern Alps. Starting out in Christchurch, the TranzAlpine travels northwest through the fertile fields of the Canterbury Plains alongside the Waimakariri River, before rising up into the mountains, where it crosses the mighty Staircase Viaduct. Passing through the magnificent mountains of Arthur’s Pass National Park, the TranzAlpine chugs onwards through the subtropical rainforests of the West Coast. The journey ends in the historic former gold mining town of Greymouth. 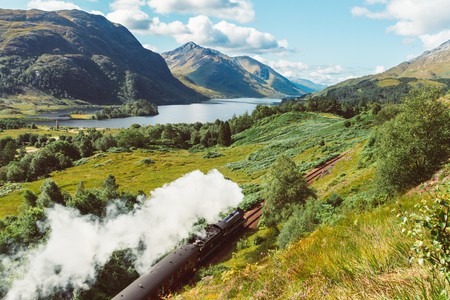 The West Highland Line is an excellent way to experience the wild, western coast of Scotland as it travels through the most diverse scenery in the country. Once the train leaves Glasgow – the most populated city in Scotland– the urban landscape quickly succumbs to verdant glens and tranquil lochs. Heading northwards, the West Highland Line passes through the remote wilderness of Rannoch Moor, before skirting the towering Ben Nevis and touching down in Fort William. Switching direction and moving westwards, the train then traverses the Glenfinnan Viaduct (featured in the Harry Potter film series) prior to arriving at the bustling port of Mallaig. 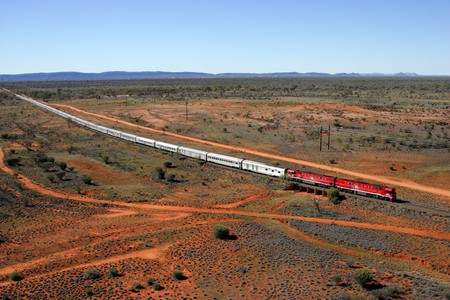 The Outback of Australia is home to some of the most awe-inspiring scenery on the planet – and The Ghan offers travellers the opportunity to experience this landscape in pure luxury. Cutting a path directly through the fiery red centre of Australia, The Ghan travels 2,797km (1,846mi) from Darwin in the north to Adelaide. It takes passengers from the lush, tropical coast of the Northern Territory via the red rocks of the MacDonnell Ranges and onto the fertile plains of South Australia. A trip on The Ghan also features off-train excursions, including a leisurely boat tour of Nitmiluk Gorge and a trip to the unique desert town of Alice Springs. 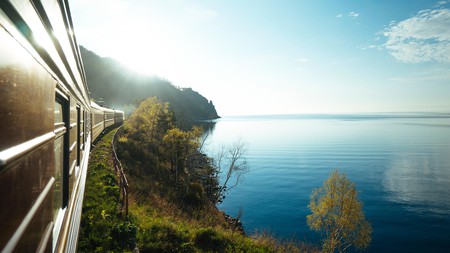 The Trans-Siberian Railway is among the longest rail routes in the world, running for 9,289km (5,772mi). Starting at the westward terminus in Moscow, the Trans-Siberian crosses over the Ural Mountains and through dense Siberian forest. It spans the entire width of Russia and connects the capital with Vladivostok in the east. The seven-day journey takes passengers by landmarks including the magnificent 984m (3,227ft) bridge that crosses the River Ob at Novosibirsk (the third-largest city in Russia) and the incredible blue waters of Lake Baikal, the largest freshwater lake by volume in the world. 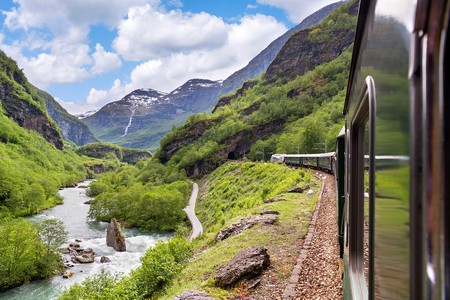 At just an hour long, the Flåm Railway may not be the grandest of journeys, but it’s certainly among the most picturesque. In fact, it’s one of top attractions in Norway and is frequently hailed as one of the most beautiful train rides in the world. The railway rises 863m (2,831ft) from the starting point in the tiny village of Flåm in the Sognefjord (making it one of the steepest rail routes in Europe), and passes by deep ravines, cascading waterfalls and towering peaks to the mountaintop station of Myrdal. The Flåm Railway is most magical in the colder months when a blanket of snow turns the landscape into a winter wonderland. 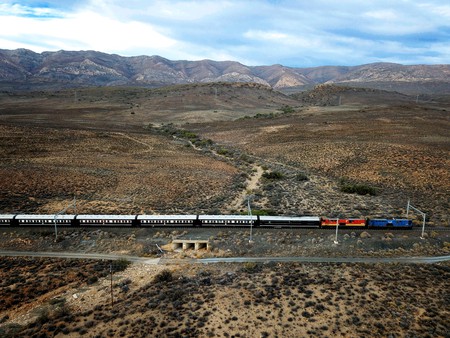 Rovos Rail’s Namibia Safari, a luxury train trek spanning some 3,219km (2,000mi), passes some of the most spectacular scenery the Southern African region has to offer. The train departs from Pretoria and takes passengers into Kimberley – a former diamond-rush town that’s home to Big Hole, one of the largest hand-dug mines in the world. It then traverses the Northern Cape and Fish River Canyon. As it moves onwards into the Kalahari Desert, the train visits Windhoek – the lively capital of Namibia – before crossing the Namib Desert and finishing at Swakopmund. This last stop is a perfectly preserved German Hansa town on the Namibian coast. 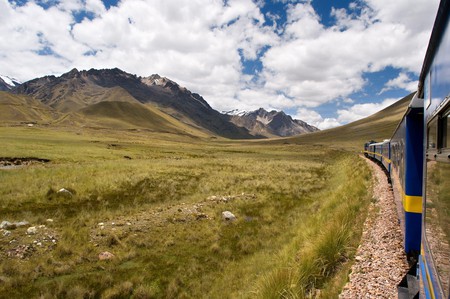 See the Unesco-protected Machu Picchu a different way from the Belmond Hiram Bingham. This train ride travels through the most romantic scenery in Peru, and ends at the ancient Inca ruins, high in the Andes Mountains. It starts from the ancient city of Cusco, before traversing the Sacred Valley of the Incas (a stunning vale formed by the winding Urubamba River), and passing through the tiny village of Ollantaytambo.

Traverse from Istanbul to Budapest on this epic route through four countries. You’ll start in Turkey with a chance to see the Blue Mosque, before wending through Bulgaria, Romania and Hungary over seven days. The highlight for some, particularly literary fans, will be the views of 14th-century Bran Castle – also known as Dracula’s Castle – in Brasov, Romania. 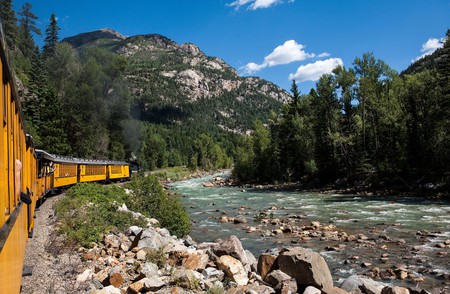 The Durango and Silverton Narrow Gauge Railroad travels along the Animas River as it passes through the San Juan Mountains | © Jon G. Fuller/VWPics / Alamy Stock Photo

The coal-fired Durango & Silverton Narrow Gauge Railroad is the one for history buffs. It was originally constructed as a means of hauling silver and gold from the San Juan Mountains in Colorado, and has been in continuous operation since it was completed in 1882. Now, the railroad allows passengers to enjoy the same incredible journey taken by Old West miners and settlers more than a century ago. The 72km (45mi) route moves alongside the Animas River, winding through the remote wilderness and fabulous canyons of San Juan National Forest. 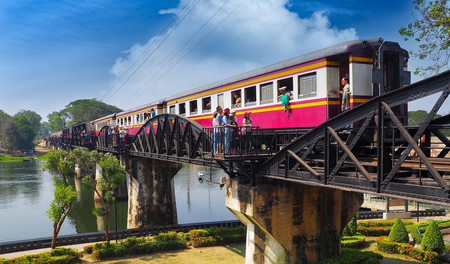 It may be nicknamed The Death Railway, due to its dark World War II roots, but don’t be fooled by the misleading moniker of this section of the Thailand-Burma railway. Over 402km (250mi) of Thai railroad track will tempt travellers with a fantastic journey from Bangkok to Nam Tok. Trudging deep into the jungle, the train rattles along wooden trestles, waving to vibrant stations and batting away low-hanging branches. Though this route is a sombre one, travellers can learn more about the tragic history of the railway in Kanchanaburi, just west of Bangkok. 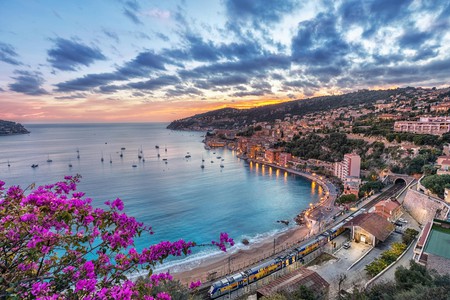 Train travel often caters to slow travel, but for those who are short on time, the Riviera Railway is ideal. Travellers are transported from Cannes, France to Ventimiglia, Italy, in under two hours with spectacular views of the Mediterranean. Shutterbugs will love snapping shots of the Promenade des Anglais in Nice, while country-counters can conveniently check Monaco off their list. When the train rolls to a stop in Ventimiglia, ancient Roman sites and sun-soaked beaches await. 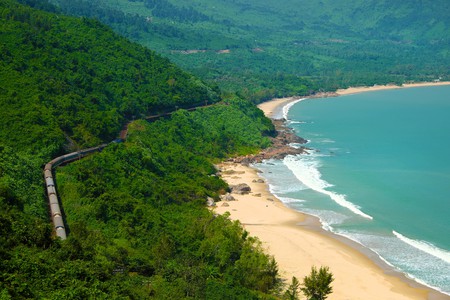 The capital city of Vietnam is rich with culture, but visitors would be remiss if they didn’t take advantage of the diverse scenery offered via the Reunification Express. Though one could ride the rails all the way to Ho Chi Minh City, the stretch leading to Da Nang is a wondrous journey in itself. Miles under the jungle canopy are juxtaposed with intimate views of villages and jaw-dropping cliffside glimpses of the South China Sea. Da Nang awaits with French colonial architecture and century-old pagodas. 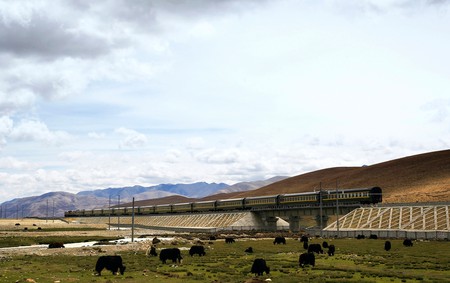 Mountain climbers and locomotive lovers should set their sights on the Qinghai-Tibet railway. Scaling up the mountainside to around 5,000m (16,404ft) above sea level, this route is home to the highest section of railway in the world. Passengers shouldn’t be surprised if they are left breathless by the temples, wildlife and snow-capped mountain tops – thankfully, purified oxygen is pumped into each train compartment to help with any altitude sickness. 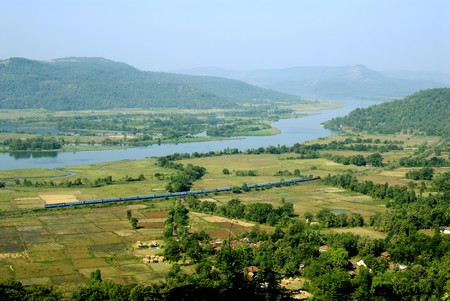 The Mandovi Express is named after the Mandovi River, of which passengers have spectacular views | © Dinodia Photos / Alamy Stock Photo

There are few better ways to spend the day along the Konkan Coast of India than on the Mandovi Express. This half-day train ride from Mumbai to Madgaon may consume other breakfast, lunch and dinner plans, but it’s well worth the trip for those with an appetite for indulging in one of the finest routes offered by Indian Railways. The Mandovi Express has a reputation for serving great regional cuisine (at an extra cost) throughout the 12-hour journey. Between quaint countryside views and flavourful meals, travellers will disembark with a full stomach and a full camera roll.