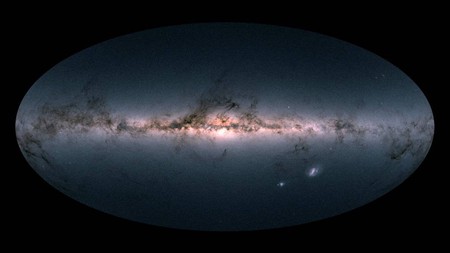 Europe’s Gaia satellite has published the most detailed and comprehensive map ever made of the Milky Way Galaxy.

An incredible new map from the European Space Agency (ESA)’s Gaia satellite shows more than a billion stars, complete with their distance from Earth, colour, and motion through space.

The catalogue was created from data Gaia gathered on some 1.7 billion stars from its unique vantage point in space – about 1.5 million kilometres (930,000 miles) from Earth.

‘Gaia will greatly advance our understanding of the Universe on all cosmic scales,’ says Timo Prusti, Gaia project scientist at ESA. ‘Even in the neighbourhood of the Sun, which is the region we thought we understood best, Gaia is revealing new and exciting features.’

The map, which is the most complete and precise map of the sky ever produced, is part of a larger project known as Gaia’s ‘book of the heavens’. When the project is complete in the 2020s, it will underpin astronomy for decades to come.

‘The observations collected by Gaia are redefining the foundations of astronomy,’ says Günther Hasinger, ESA Director of Science. ‘Gaia is an ambitious mission that relies on a huge human collaboration to make sense of a large volume of highly complex data. It demonstrates the need for long-term projects to guarantee progress in space science and technology and to implement even more daring scientific missions of the coming decades.’

When complete, the map will serve as a reference to plan all observations by other telescopes, be integral to the operation of all spacecrafts (which navigate space by tracking stars) and give insights into the our Galaxy, including hints about its history and its evolution in the future.

It will also help scientists to find new asteroids and planets, and to test physical constants and theories.

‘With Gaia, we can actually deconstruct the whole history of the Milky Way,’ said Guenther Hasinger, ESA’s director of science. ‘It’s like archaeoastronomy… to really build up the history of our Universe.’

A series of 360-degree videos and other virtual reality visualisation resources are available here.