'Ornament Is Crime' Celebrates the Best Modernist Architecture in the World 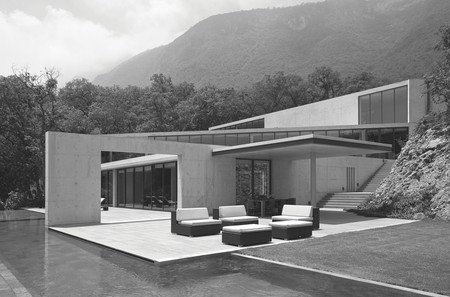 If you’re a fan of modernist architecture, you’ll love new Phaidon book, Ornament is Crime. Showcasing the finest examples of this innovative architectural style, it covers everything from Le Corbusier and Mies van der Rohe icons, to contemporary designs by Tadao Ando and John Pawson. 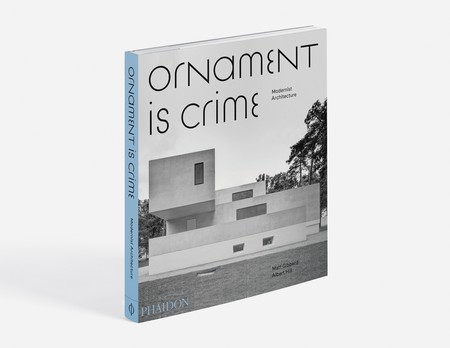 Author Matt Gibberd – grandson of modernist architect Sir Frederick Gibberd – shares his passion for modernism, which was inherited from his grandfather and father (also an architect). Taking his dad’s advice to do anything he liked professionally ‘so long as it’s not architecture’, Gibberd became a journalist, writing about the subject for many publications, including Wallpaper and The World of Interiors. 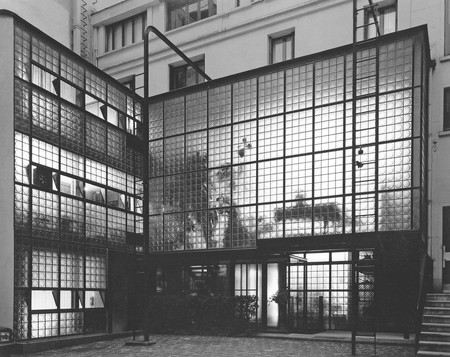 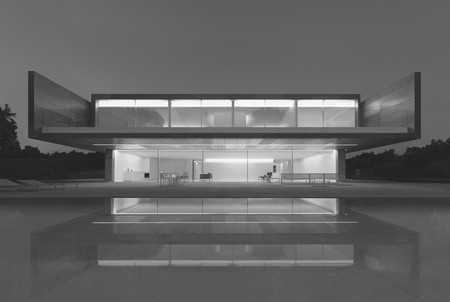 Shortly after his career in journalism, he set up his own estate agency in 2005 with friend and co-creator of the book, Albert Hill, called The Modern House. The company focuses almost entirely on listing properties based on their design quality and architectural history, making them quite unique – some of the houses they’ve sold have even featured in the book. 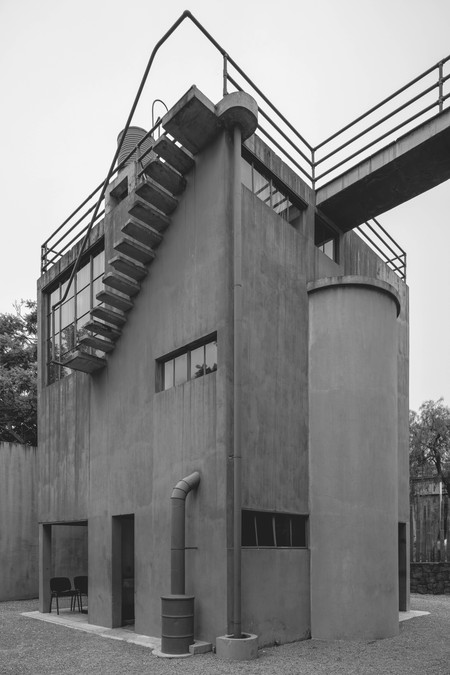 Here, in this extract from the book (below), Gibberd tells the story behind Ornament is Crime – tales from his journeys hunting for modernist houses, plus his favourite examples of architecture from the period.

‘The purpose of Ornament is Crime is to identify its key aesthetic characteristics and show how this most trailblazing of architectural styles is still thriving in the twenty-first century. If modernist architecture were a family tree, then contemporary architects such as Smiljan Radic, Tadao Ando and John Pawson would all have inherited limbs, ears and noses from the modernist masters Walter Gropius, Le Corbusier and Frank Lloyd Wright. 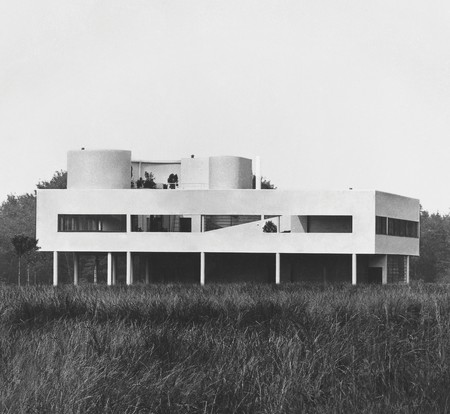 ‘The buildings in this book – all of them freestanding houses – have been grouped together according to aesthetic commonality, with a deliberate absence of hierarchy, to illustrate, for example, that a house in Yokohama built in 2012 shares a common modernist lineage with Le Corbusier’s Maison Guiette in Belgium built almost 90 years before.

‘By displaying them in black and white rather than colour, we have placed an emphasis on form and elevational disposition rather than surface detailing or geographical context. The result is a visual manifesto that seeks to reposition modernism as a style that has transcended the generations to emerge remarkably unscathed.

‘Very clear themes emerge: flat roofs, cubic or cylindrical structures, large windows in horizontal bands, a truth to materials, and a tendency towards plain-rendered exterior surfaces. All of these attributes can be seen in abundance in the architecture of the late twentieth and early twenty-first centuries that followed the period generally acknowledged as that of modernism. 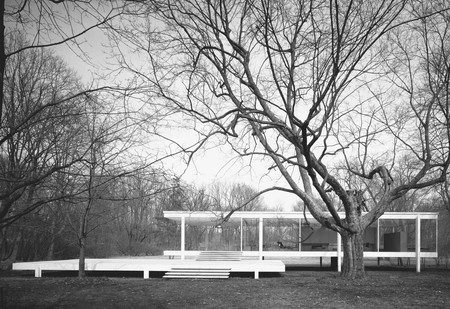 ‘The book’s title has been burgled from a lecture given in 1910 by the acerbic Austrian architect and theorist Adolf Loos, called Ornament and Crime. In a reaction to the florid forms of Art Nouveau, Loos declared that decorative details were for degenerates – he believed that real design should be strong and stolid and stripped-back. His buildings, such as Villa Muller and the Steiner House were economical, utilitarian and pure of form. 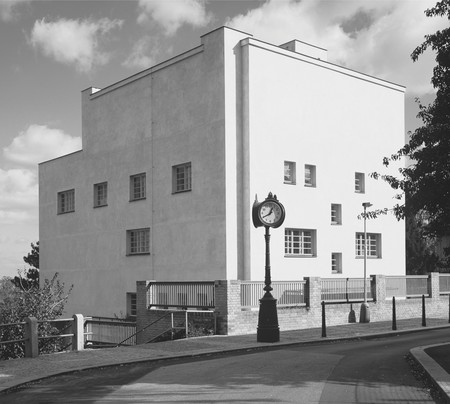 ‘It wasn’t until the Europeans arrived in the 1930s that pure modernism really got going in America. Mies van der Rohe fled to Chicago, and set to work exploiting the potential of curtain walling to produce lustrous skyscrapers. After their short but seismic stay in Britain, Walter Gropius and Marcel Breuer arrived at the Harvard Graduate School of Design in 1937, where they taught the International Style to a generation of American architects. 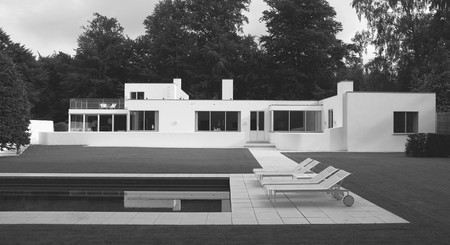 ‘On a road trip to France one summer, my wife and I managed to visit every Le Corbusier building between Calais and Marseilles. In Los Angeles, we scaled the hill up to Frank Lloyd Wright’s Hollyhock House, the design of which is inspired by the flower of the same name. Wright was as influential in America as Adolf Loos was in Europe. He advocated a more organic form of modernism, derived from his Arts & Crafts roots.

‘Much in the way that Picasso and Braque reinvented the notion of an artwork through Cubism, Frank Lloyd Wright reformulated domestic architecture by reducing it to abstract planes. At Fallingwater, his finest achievement, the house is literally fused with the rock – becoming an integral part of the site – and a waterfall gushes underneath. 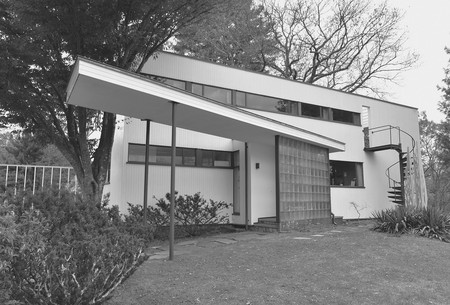 ‘Last summer my travels took me to Wellfleet in Cape Cod on the Eastern Seaboard of America, which became a remarkable testing ground for these new ideas. In the 1940s, the likes of Marcel Breuer and Serge Chermayeff built houses there, and the sand dunes and pitch pines resounded with central European chatter. Cape Cod’s unforgiving marine climate dictated a sense of impermanence, and many buildings are raised up on stilts to allow water, snow or sand to career beneath them. The Hatch House by Jack Hughes Hall, for example, has a series of external timber panels that fold down for the winter, keeping the wind out and creating a pleasingly blank external appearance. 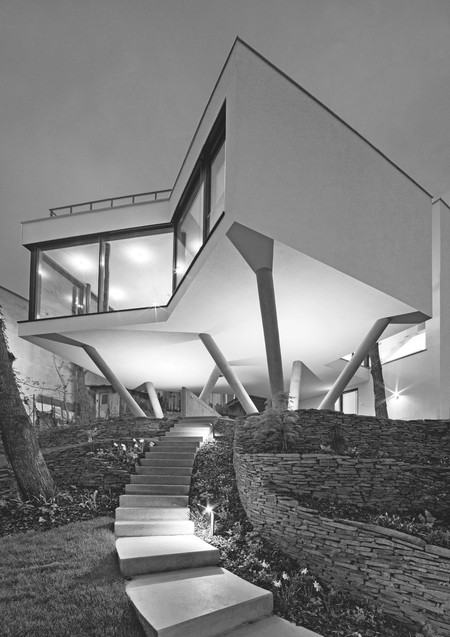 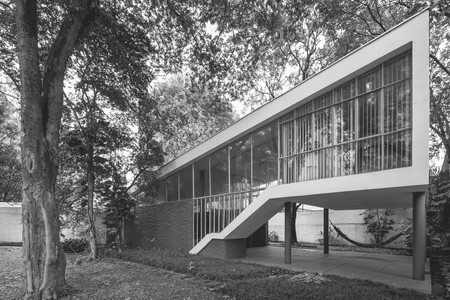 ‘A century after it hatched from its determinedly rectilinear shell, modernism is as stark and exhilarating as ever, and many contemporary architects continue to use it as their primary reference point. Perhaps the most poignant example is the building on the cover of this book, designed by Bruno Fioretti Marquez. Located at the Bauhaus campus in Dessau, it is a reinterpretation of two houses originally designed by Walter Gropius for professors of the school, which were partly destroyed in an air raid during World War II.

‘Rather than create identical replacements, Marquez decided to retain the proportions of the original structures but further reduce the already-minimalist volumes, with seamless, semi-opaque glazing and light-grey concrete facades. The result is cubic, sculptural and ghostly, and bears the misty-eyed nostalgia of a sepia photograph. For many, it seems, ornament is more of a crime than ever.’ 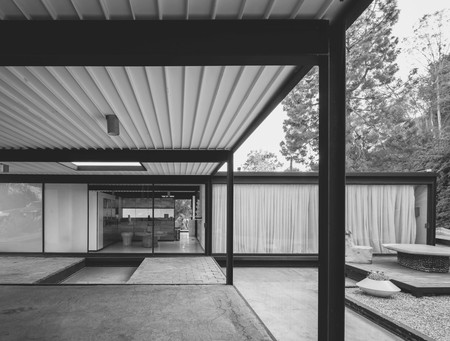 Purchase your copy of Ornament is Crime here.