Relics of Communism That You Can Still Visit Today

While much of Europe’s Soviet past has been destroyed and abandoned, many relics remain mixed in with modern-day society. Whether it’s sharp-angled monuments, converted bunkers, or buildings built for/by the working class, the socialist history continues to be seen today. 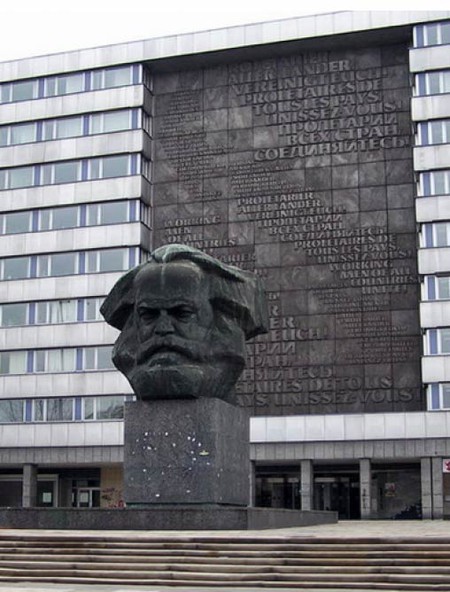 We all know about the infamous Berlin Wall, and while it’s definitely worth checking out if you’re in the area, there’s not much of it left, and no one even uses it today. If you want to see some socialist walls that are still standing strong, head to Karl Marx Allee in East Berlin. Deemed “Berlin’s first socialist street,” it was intended to be an oversized marvel of Stalinist design (in fact, the street was originally named Stalinallee). Taking cues from the streets of Moscow, Karl Marx Allee features enormous, wedding-cake style apartment buildings lined with tiles and murals of the working class. Indeed, Karl Marx Allee was somewhat of a palace for the proletariat — a luxurious living space for the noblest class under socialism. Stretching across a width of almost 90 meters, today the sidewalks of Karl Marx Allee feel perhaps eerily spacious, but take a stroll down its spread-out sidewalks and you may find yourself feel a twinge of phantom Ostalgie.

But if you think its 2 km of socialist glory just doesn’t do Karl justice, you can always head to the German city of Chemnitz to visit the Karl Marx Monument — literally a giant sculpture of his angular, stern-faced head. 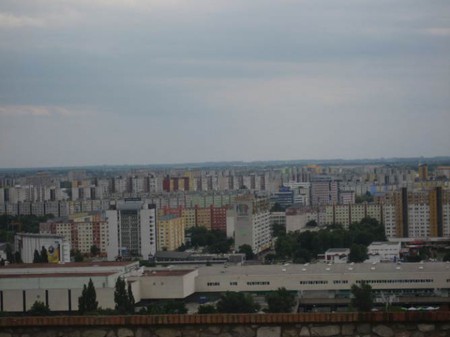 The pastel patterns of Petržalka | © WikiCommons

Another socialist living space still in use today is Petržalka, a notably less glorious series of apartments located in Bratislava. The apartments, constructed in the ’70s as part of a major housing project, are notable for their dizzying alikeness as building after building is constructed in standard socialist style — tall concrete panels of prefabricated concrete (paneláky in Czech and Slovak). Many of them are painted in muted pastel colors and decorated with simple, rectangular designs you can find replicated all over the rest of Slovakia. Although these concrete clones are certainly not original, Petržalka is unique in that it boasts the highest concentration of panelák apartments in one location anywhere in Central Europe. Housing over 120,000 people and covering about 11 square miles, Petržalka could almost be considered a city of its own, despite its lack of an actual city center.

Still, there are a number of entertainment options in Petržalka, including theaters, a shopping mall (one of the biggest in Slovakia), and Sad Janke Kráľa — the oldest public park in Central Europe. If you get bored with those diversions, you can always snoop around the abandoned metro station lurking under the city. But you don’t need a destination when entering Petržalka; simply take a bus over the Danube, and loose yourself wandering in the neighborhood’s maze of rectangular efficiency.

Resting by the River Spree in Berlin is Treptower Park, another relic of Soviet times still enjoyed today. The area has a nice view of the water and ample green space, but there are a few slightly more dramatic attractions to enjoy if picnicking isn’t your thing. Among the sunbathing Berliners, you can find several monuments and sarcophagi that commemorate the Soviet soldiers who died in the WWII capture of Berlin. On one side of the park, a pair of menacing red granite monuments—emblazoned with the hammer and sickle—shelter statues of kneeling Soviet soldiers. Directly in the center of these monuments and on the opposite end of the park, a 12-meter tall Soviet soldier holding a massive sword crushes a 3-D swastika under his feet, all the while cradling a pudgy little German child. Underneath it all, several thousand Soviet soldiers have been laid to rest, and somewhere in the near distance, a statue of a woman representing the Russian Motherland weeps, mourning her dead sons.

While some Berliners aren’t so in love with the in-your-face display of Soviet pride, people continue to leave flowers at the foot of the soldier statue on Victory Day, and the monuments in this park have been well-maintained (in fact, the soldier statue was refurbished in 2003). One more (less morbid) relic that can be found in Treptower is Spreepark, an abandoned amusement park that you’re technically not allowed to enter. Technically. 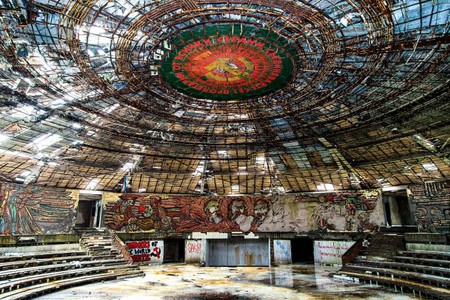 The crumbling beauty of Buzludzha | © Wikpedia

Bulgaria is home to a number of larger-than-life monuments, but the true red star of the show is the House-Monument of the Bulgarian Communist Party, located at the top of Mount Buzludzha. Opened in 1981, the flying saucer-shaped monument served as the headquarters for Communist elites, but has since fallen into disrepair since its abandonment in 1989. It’s a hike to get to, difficult to enter, and is potentially hazardous due to its unstable structure (there’s also the urban legend about the French backpackers murdered while exploring Buzludzha’s ominous depths…). But if you do manage to get inside the concrete UFO, it is definitely worth it. Decaying but intricate communist murals line the auditorium’s circular walls, a hammer and sickle glare down from the top of the domed room, and hidden below lie icy, unlit tunnels graffitied with warnings of zombies. If you don’t want to make the trip on your own and have eleven days to kill in September, you can always join Darmon Richter from The Bohemian Blog on his tour through Bulgaria and Macedonia, which will include a stop inside Buzludzha’s iconic saucer. 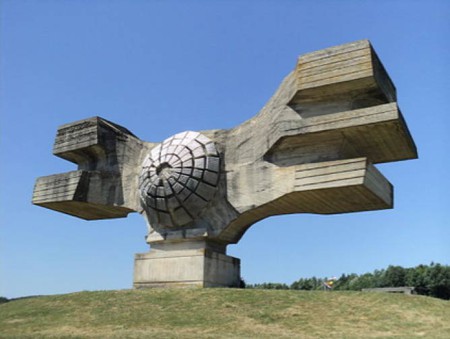 Scattered around former Yugoslavia are delightfully brutalist and otherworldly structures known as spomenika (literally, “monuments”). They were commissioned by former Yugoslavian leader Josip Broz Tito during his Communist regime in an effort to commemorate battles from WWII. Since then, however, many of these monuments have suffered from scrapping and vandalism, as well as some wear and tear from the elements. There’s no denying the bizarre appeal of these sculptures — not only for their abstract, extraterrestrial designs, but because they essentially bear no resemblance to the battles they represent. While many monuments around Eastern Europe were created in the style of socialist realism (think: sharp jawlines + a strong sense of conviction), spomenika are unique in their neutrality. They’re strange and sleek (albeit increasingly decrepit) relics of a different era, and are worth seeing if you ever find yourself in the Balkan countryside. 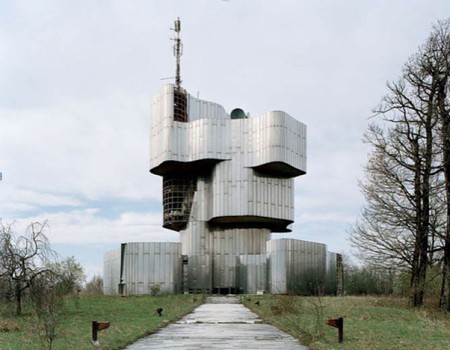 Bunker down with a Beer

War means bunkers. The end of war, means slightly hokey tours and dance clubs made from bunkers. After the end of WWII and the eventual fall of the Iron Curtain, many old bunkers were simply been left to brood underground. Some, however, have been converted into various money-making opportunities, such as Prague’s multifunctional Bunkr Parukářka. It’s a bar, music venue, climbing wall facility, and it is actually required to return to its original purpose should WWIII break out. There are plenty of other bunker bars scattered around Europe, like Bratislava’s gritty Subclub and Moscow’s elaborate Bunker-42. If you want a more official look inside the bunkers of Cold Wars past, there are always tours like the Story of Berlin Bunker Tour or the Prague Nuclear Bunker tour.

Where Monuments go to die

While many Soviet monuments remain standing in public spaces today, some cities are more eager than others to sweep away memories of the past. In Budapest, you can visit Memento Park’s collection of grim, oversized Soviet statues, although you’ll have to take a bus out of the city center to get to it. It’s a modestly sized collection, but definitely worth a visit if you’ve got some extra time to make the trip over. The true mecca for monuments of the past, however, lies in Moscow at the Graveyard to Fallen Monuments. Officially known as Muzeon Park, the site contains over 700 statues and sculptures, including some of Vladimir Lenin— funny considering the fair amount (i.e. thousands) of Lenin sculptures still floating around public spaces all over Russia. The park or ‘graveyard’ is free, but offers tours for a price, and hosts movies and concerts when the weather gets warm.

If you’re not satisfied with Moscow’s monument graveyard, there’s always the actual graveyard nearby—Novodevichy Cemetery. The site serves as the permanent resting place for a number of elites—Soviet or otherwise, including Nikita Khrushchev, Nadezhda Alliluyeva, and Nikolai Gogol. Many graves include some pretty gawk-worthy gravestones, some of them including busts of the person buried below, and while the Kremlin Wall Necropolis is technically Russia’s most prestigious burial ground, Novodevichy has a more personal feel to it. But if you’re not impressed by some socialist realist stonework, you can head over to the Red Square for the real deal — Lenin’s Tomb. Vlad himself has been resting in his glass sarcophagus since 1924, and may be visited every day except on holidays from 10:00-13:00. While seeing Lenin’s embalmed corpse may not be everyone, there’s hardly a more genuine relic of redder times.