Cultural Events and Festivals for 2022 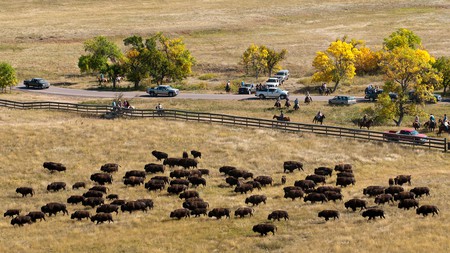 Each September, you can watch as a herd of buffalo are rounded up in Custer State Park, South Dakota | © Dan Leeth / Alamy Stock Photo

With 2021 drawing to a close, we can start looking forward to a new year with the promise of adventure. You might be planning a trip with everything taken care of, or you could be heading off to see some of the iconic film and TV locations you’ve seen on screen recently. If you want a different type of getaway, how about one of these cultural events from around the world? From winter extravaganzas in Japan to flower festivals in the mountains of Montenegro, these are some of the events worth travelling for next year.

An artistic, and captivating, forest of ice, the Subzero Forest has been enchanting visitors since 1971, when it was created by the innkeeper of the Akigami Onsen Ryokan. The forest, which looks blue in the afternoon, lures visitors into a breathtaking world of fantasy during the night-time illuminations.

Set amid the spectacular surroundings of Lake Louise, in Banff National Park in the Canadian Rockies, the Ice Magic Festival is a world-class ice-carving event held at the Fairmont Chateau Lake Louise. Talented local sculptors compete against one another and spectators can take a magical walk through the ice castles they create that form a winter wonderland. If you’re in the area, then also check out the Chinook Winter Blast Festival, which features outdoor artwork from late January through to February. 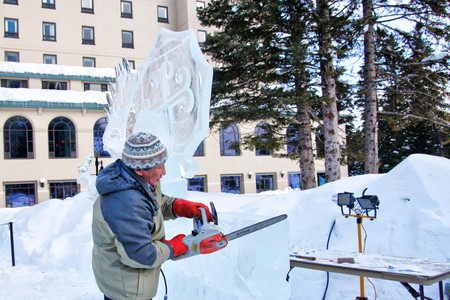 This annual 11-day festival in Palm Springs returns in 2022 with more than 350 events, including the Modernism Show & Sale, tours of iconic homes in more than 30 neighbourhoods, and the popular Signature Home Tour on both weekends. Also on offer are architectural walking, bike and doubledecker-bus tours, visits to the historic Annenberg Estate at Sunnylands, a classic car show, garden tours, nightly parties, and a special series of compelling and informative talks. 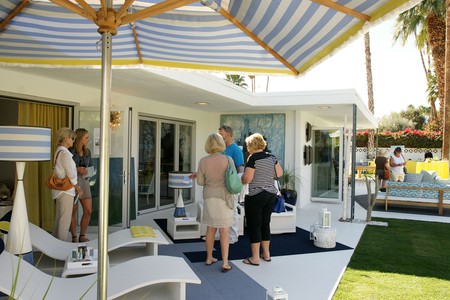 Marking the official start of spring, the annual Mimosa Festival, also known as the festival of flowers, is held in the pretty coastal town of Herceg Novi in Montenegro. A mash of yellow blooms, marching majorettes, music concerts and sports events, the festival celebrates the arrival of spring and brings the community together through a series of free events and regional cuisine. Locals believe the mimosa flower represents rebirth, restoration and new growth for the year ahead.

After two years having to celebrate the annual fire festival virtually, Las Fallas returns to the streets of Valencia in 2022. The festival includes a parade of huge effigies that are then burnt in the Plaza del Ayuntamiento, followed by a huge firework display; this year it will bear the stamp of the Fallas artist Alejandro Santaeulalia and urban creator Dulk, whose work has been exhibited in Miami, London and Antwerp. Under the title Protegeix allò que estimes, or Protect What You Love, the artists will merge their creations in an effigy made of sustainable materials that seeks to raise awareness of conservation. Furthermore, in 2022, Valencia holds the crown for both World Capital of Design and European Capital of Smart Tourism.

Cherry-blossom season is usually associated with Japan, so it’s something of a surprise to learn that Georgia is set to host the Pinkest Party on Earth in late March. Celebrating its 40th anniversary in 2022, the event sees more than 300,000 Yoshino cherry trees in bloom in Macon in central Georgia.

The ancient 250mi (403km) pilgrimage trail traversing Bhutan is set to reopen following years of extensive restoration. Hikers and mountain bikers will be able to follow the trail for the first time in more than 60 years. Bhutan tops many travellers’ bucket lists, and this latest attraction will make it one of the best places to visit in 2022.

Secret gigs in hidden locations, with stages set up beside thermal springs and volcanic lakes – tickets to the Tremor festival in the Azores are a musical must-have. The unique location and eclectic line-up create a fantastic, fun atmosphere at this event, where music-lovers and adventurous travellers can gather for a party like no other.

Known to locals as Festa Frawli, this annual festival is held in Mġarr, a village on the north of the island. Strawberries are picked for the festival and local people prepare delicacies to sell on the stalls set up in the square outside the parish church. The timing is perfect, as this is also the start of the spectacular fireworks displays that light up Malta in April and May. 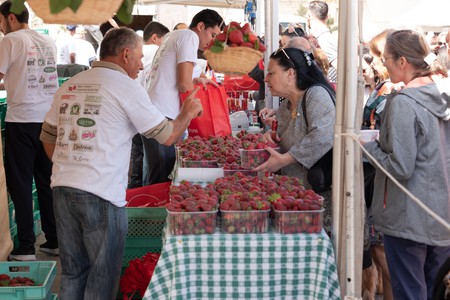 The strawberry Festival in Mgarr, Malta, is a feast of food and music | © Monika Tymanowska / Alamy Stock Photo

The Mariposa Butterfly Festival, inspired by the 1806 Spanish expedition of Gabriel Moraga, celebrates the Spanish name of the historic Gold Rush town Mariposa, meaning “butterfly”. One of the most anticipated moments of the festival is the release of some 4,000 butterflies, creating a colourful storm. Other family-friendly games and activities include bouncy castles, pony rides, virtual-reality stations and face-painting booths.

Detour Discotheque will host a “party at the edge of the world” in the village of Þingeyri, in the Westfjords of Iceland. This exclusive pop-up nightclub, with a capacity of just 160, will feature a line-up of DJs from Iceland, the US and UK playing classic disco tunes under a spinning mirrorball.

Japan’s largest Golden Week festival, held annually in Fukuoka with 30,000 participants and more than 2m spectators, is 800 years old, having begun in the Heian period. There are parades across Fukuoka and 30 stages are set up, each hosting a wide variety of performances, along with food, drink and games stalls. 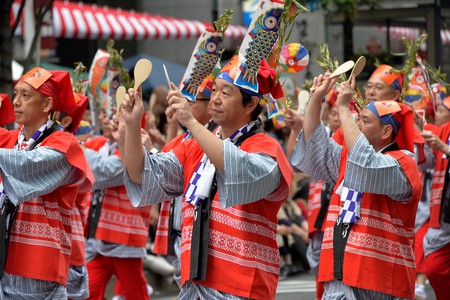 A modern mango festival that started in 1993, this colourful event lasts for two weeks and usually coincides with May 22, Independence Day in the Philippines. The mangos on Guimaras, where there are almost twice as many mango trees as there are people, are regarded as the sweetest in the country and sold around the world. Understandably, locals are proud of their fruit, so you can bet the celebrations will be mango-based: people dress up as the fruit, there are speed-eating contests and parades show the farming process to a percussive beat.

Juneteenth commemorates the liberation of the last slaves in Texas, on June 19, 1965, two years after the Emancipation Proclamation had abolished slavery in the Confederate States. First recognised as a federal holiday in 2021, many observe the date with local celebrations, including parties, parades, picnics and festivals – and 2022 celebrations in Pittsburgh are set to be no exception. 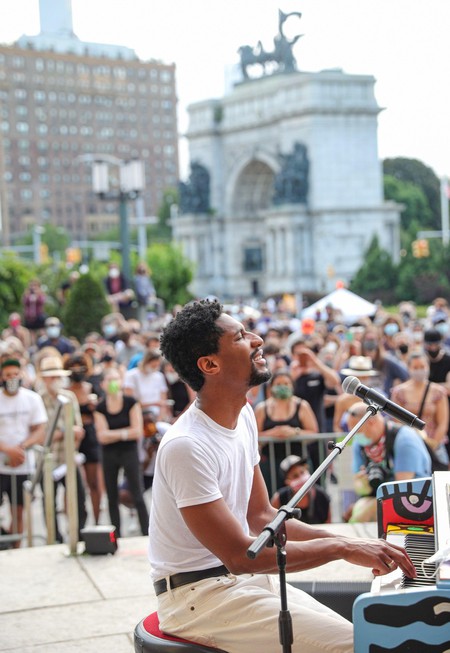 Juneteenth is celebrated all over the US, including in Brooklyn | © Everett Collection Inc / Alamy Stock Photo

The Hachinohe Sansha Taisai Festival, a designated Important Intangible Folk Cultural Properties of Japan, boasts three centuries of history and tradition having started out in 1721 as a shrine procession. Powerful merchants held a procession of floats decorated with dolls, and locals added a tiger dance. By the late Edo era in the mid-18th century, it had grown to be the biggest festival in the region and it’s popular with locals to this day.

Sziget Festival is one of the largest music and cultural festivals in Europe, held every August in northern Budapest on Óbudai-sziget (Old Buda Island), a leafy 270-acre (108ha) island on the Danube. More than 1,000 performances take place each year, with Dua Lipa, Arctic Monkeys and Kings of Leon among many musicians set to perform next summer. In addition to music, there’s also cinema, dance, theatre, tattooing, indoor rowing, rock-climbing, bungee jumping and life-sized foosball.

No, really, this is an actual event. Apparently you can follow the entire season of events live via an online stream, but if you want to get to an actual day of watching Fido hang 10 and catch a tube, then get down to California this month. Not sure if we want to learn to surf now, or just buy an athletic puppy? In case you’re wondering, the animals are perfectly safe and a portion of profits go to dog-related charities. 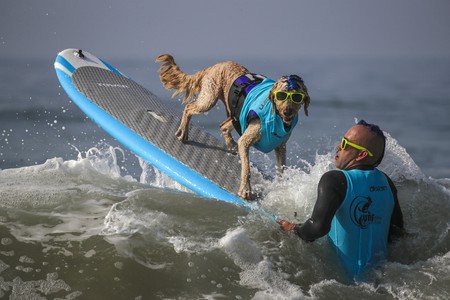 Deep in the San Juan mountains, in southwest Colorado, amid waterfalls at the end of a deep canyon, is where you’ll find the Telluride Jazz Festival, a three-day music event centred around jazz. This annual event combines pristine nature with boundless creativity, and a soundtrack provided by acclaimed artists. The mountain peaks and aspen trees that dot the hillsides provide the perfect amphitheatre for music to resonate through the canyon. Providing a sample of Colorado’s renowned craftsmanship, amenities include food vendors, craft brews and cocktails.

At Buffalo Roundup, in South Dakota, visitors feel the earth tremble as the hooves of more than 1,300 American buffalo pound through the valley. At the annual Buffalo Roundup, herdsmen on horseback spur them over the ridge, down the hill and into corrals for sorting. The annual roundup keeps the population in balance with the available land and resources; most return right back to their home on the grasslands of Custer State Park. Open to the public, the event attracts more than 14,000 people each year, and 2022 marks the 150th anniversary of Yellowstone National Park which covers the Great American West states of Idaho, Montana, and Wyoming. Expect additional celebrations and events throughout the year. 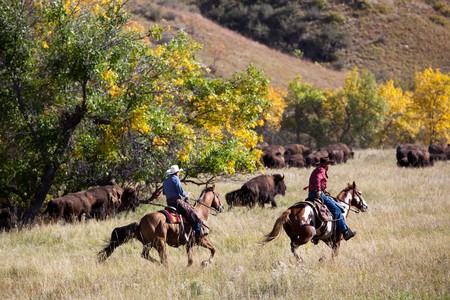 As daylight hours begin to recede in Jasper National Park, stargazers come out to explore the night sky. Named one of Canada’s largest Dark Sky Preserves, Jasper National Park has very little light pollution, making it an ideal location to see the stars. Lucky stargazers are sometimes treated to a performance by the elusive Northern Lights. During the festival, night sky experts gather to provide tours of the constellations, stars and planets above, while during the daytime, space-related activities take place around the Rocky Mountain town of Jasper.

Unofficially crowned the stone crab capital of the world, the annual Stone Crab Claw Harvest Festival takes place at the Historic Old Naples Waterfront, with a weekend of live music, fresh-off-the-boat seafood and plenty of family activities. The season runs from October to May and in order to harvest the most desirable part of the crab (the claw) fishermen detach them at the joint and throw the crustaceans back into the ocean. Stone crabs have the ability to regenerate their claws every one to two years, making this Florida’s most coveted sustainable food source. 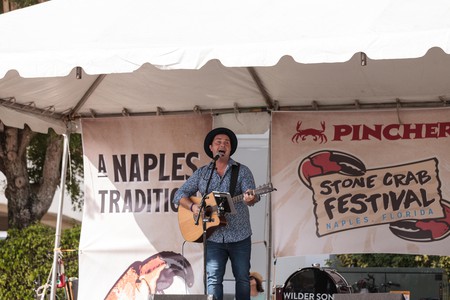 Sharing a border with Baja California, in Mexico, San Diego has a proud Mexican culture which can be seen through its street art and murals, festivals and cuisine. Every November, over the Día de los Muertos (Day of the Dead) weekend, locals come together in San Diego Old Town to celebrate those they have lost. Festivities include a procession to El Campo Santo cemetery, where music is played and individuals dress in traditional clothing and make-up inspired by La Catrina, an icon of the holiday. 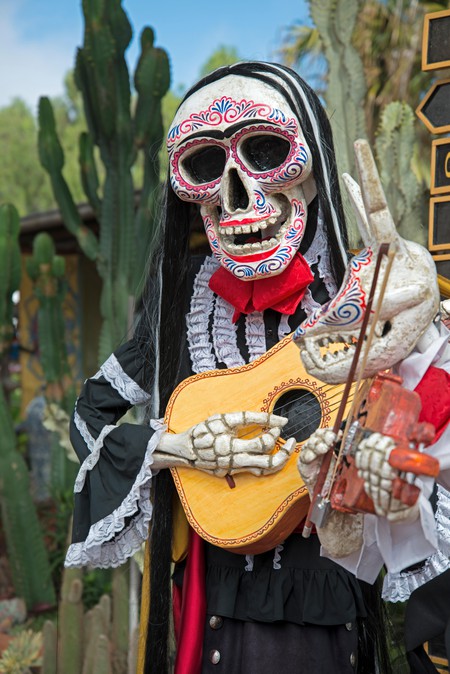 Taking inspiration from the popular London version, this Qatari Winter Wonderland will be housed on Al Maha island, near Lusail City, just north of the capital, Doha. The 20ha (50-acre) venue will open prior to the Fifa World Cup Qatar 2022™ next November, providing visitors with a festive experience during their stay.

Japan’s local events don’t pause for snow. Winter festivals, many of which are hundreds of years old, enliven the season with spectacular fireworks displays and towering snow and ice sculptures. One of the best is the Zao Juhyo Festival, where snow “monsters” are lit with twinkling lights for evening viewings. Take in the full array of colours from several vantage points, such as the rooftop observatory or restaurant.