Best Things To Do And See In Tirana, Albania 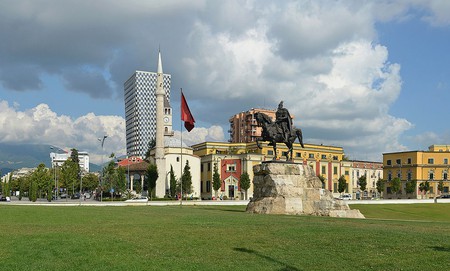 Albania, and in particular its capital, Tirana, is slowly being discovered by tourists from all over the world. The best way to start exploring this beautiful and underrated country is with our guide to the best things to see and do.

In Tirana, it seems that all roads lead to Skanderbeg Square. Once you’ve been there, you’ll understand why; this main square, named after an Albanian national hero, is the heart of the city. A statue of Skanderbeg sits in the middle of the square. It’s an iconic place, which has recently been renewed, and is a must-see for everyone who visits Albania. With an opera house, the National History Museum, the Et’Hem Bey Mosque along the sides, this huge square is perfect for a stroll.

Learn the Albanian history in the National Museum

The National History Museum is the largest museum in Albania, with over 4,750 objects in its collection, from the Paleolithic era to communist times. There’s much to find out about Albanian history even before you get into the building, because it has a large, recognizable mosaic on its front wall that illustrates the different eras in Albanian history. At the National History Museum, you will embark on a great and fascinating exploration of the history and the culture of this nation.

In a city dominated by cars, this tree-lined pedestrian street is like a breath of fresh air. With no cars and lots of shops and restaurants, Toptani Street, also called Pedonalja, is perfect for a nice walk, shopping, and for buying local souvenirs. It is shady and cool, making it an excellent hideout on a hot summer day. During the holiday season, it hosts a wonderful Christmas market. Alongside the street, there is a Millennium Cinema.

If there are two places not to be missed in Tirana, they are BunkArt and BunkArt2, two museums built inside two coveted anti-nuclear buildings. While BunkArt is bigger and located on the outskirts of Tirana, BunkArt2 is right in the middle of the town, near the main landmarks of the city.

📖 About "Bunk'Art 2": This huge underground nuclear bunker, built in the 1970s for Albania's political & military elite, has been transformed into a combined museum and art space. The rooms there contain exhibitions about the bunker's history, offering the first serious attempt to openly confront and openly discuss the country's silent past. If in Albania, than I would highly recommend this to you. It's very interesting with strong images & testimonials of the time (communism period) & very nicely done. A couple of hours well spent (on this very warm day). 👍📖

Discover Albania’s past through a walking tour

A different, and cool, way to explore the capital city of Albania is to book a Communist tour in town. Good Albania organizes these kind of tours and brings you to visit all the main Communist places of Tirana, such as BunkArt, Blloku (which during the regime was reserved only for the political elites), Museum of Surveillance, Socialist buildings and taste typical Albanian street food.

The bordeaux area at @bunk.art is somehow underestimated by the many other fascinating historic areas but according to us is one of the most important ones. The three rooms (6,7,8) show Albanian resistance during the German one year "invasion" and the practically civil war that was going on between then three political forces, trying to gain influence among Albanians. In times of civic distress, political parties thinking only about getting power..sounds pretty current doesn't it?! #communistheritage #goodalbania #foodforthought #visitalbania #visittirana #instagram #nofilter

Relax at the Artificial Lake

The best place to escape the crowds of Tirana is the Artificial Lake, a romantic area located at the end of Blloku district. It is a popular destination, especially during the weekends, when locals stroll enjoying nature and fresh air. We suggest you to consider the lake especially if you are traveling with children, because in the area there is the largest fun park of Tirana. 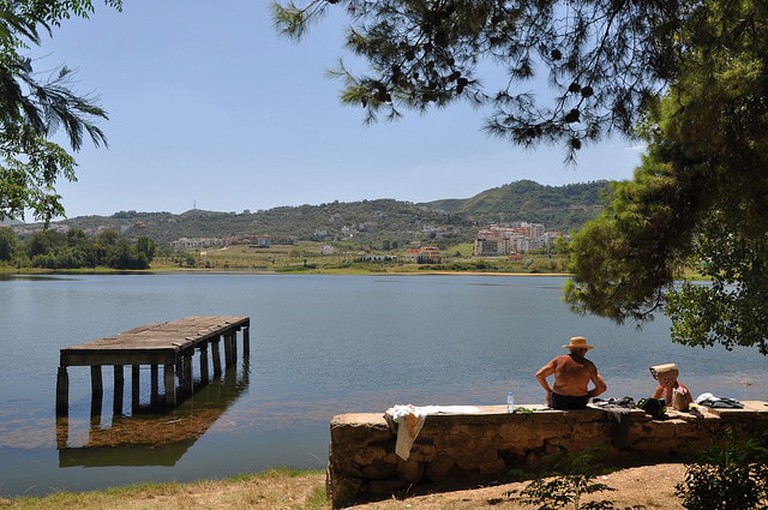 Reach Mount Dajti to admire Tirana from the top

Nature and hiking lovers will want to feast their eyes and stretch their legs on Mount Dajti, a 1,613-meter peak just east of Tirana. The best way to reach this mountain-turned-national-park is either by 15-minute cable car ride or a drive of more than an hour. Once you get to the top, you’ll understand why the journey is worth it: the panoramic views of the city from the top of the mountain are breathtaking. There you’ll also find a hotel and a few restaurants.

The only Balcony in Tirana with this view! #BallkoniDajtit

If you think that you can only see pyramids in Egypt, you are mistaken — Albania has its own. Enver Hoxha Pyramid was designed as a museum by the late Albanian communist leader’s daughter, and opened in 1988 to show his power and to maintain his legacy. After the fall of Communism, this unique monument, also known as the Pyramid of Tirana, became a symbol of the previous era and was repurposed multiple times, until it losts its appeal. Everyone who likes uncommon-looking places should visit this monument. 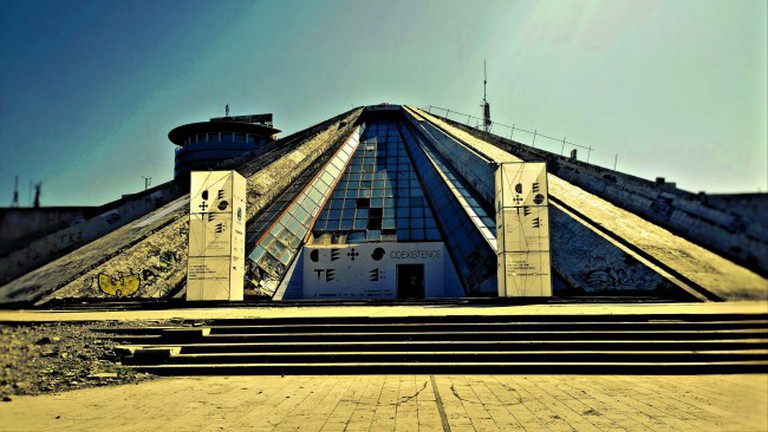 Have fun in Ish-Blloku district

This former elite communist district, also known as the Block, has been turned into a vibrant tourist attraction. During communist rule, Ish-Blloku was reserved for high-ranking communist officials; even the leader of Albania, Enver Hoxha, lived here. Nowadays this most expensive area is full of trendy bars, cafés, restaurants, and nightclubs, giving it a cosmopolitan vibe. Ish-Blloku district is also the best place to experience famous Albanian coffee culture, home of the best espresso in town.

Opened in 2017, Pazari i Ri is the new market of Tirana and one of the coolest places to visit in town. It was once one of the worst areas of the capital city, but today after a big regeneration, has turned into one of the places to be in town for every traveler. Don’t forget to take your camera and shoot some colorful pictures of the stands. Then, it’s time to taste fresh fruit and buy some typical Albanian artefacts.