What to Know About Costa Rica's 12 Different Ecosystems 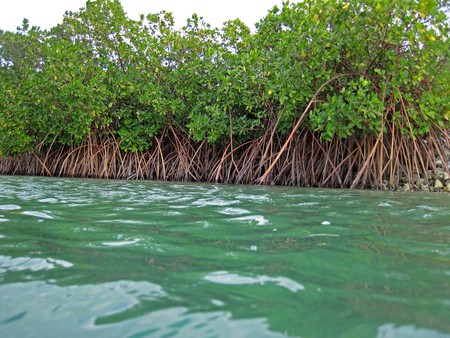 Costa Rica is a relatively small country in Central America. It is only 19,700 square miles (51,100 square kilometres) in area, comparable to the size of West Virginia in the USA or Denmark in Europe. Within that area, though, there are a dozen different ecosystems, ranging from tropical lowland rainforest to coral reef, and 25% of the land and water of those ecosystems are protected as wildlife reserves, refuges, and national parks. Costa Rica is on the top 20 list of the most biodiverse countries in the world. Here’s the lowdown on its 12 ecosystems.

Costa Rica is probably most recognized for its beautifully dense, verdant, and life-rich tropical rainforests. The consistent rainfall and warm temperatures fuel the abundant growth of plants and fungi, which provide the perfect habitat for a wide range of mammals, amphibians, reptiles, insects, and birds. The rainforest is a multi-layered habitat and specific plants and animals live and thrive at different levels, from forest-floor dwellers all the way up canopy-top creatures. The Corcovado National Park, Manuel Antonio National Park, and Tortuguero National Park are all home to this ecosystem, as well as several others. 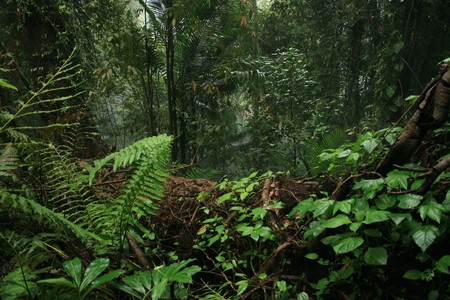 Tropical dry forests are found in the province of Guanacaste. Compared to the tropical rainforests, these areas receive far less annual rainfall. The dry season typically extends from November through the end of April and during this time there is likely to be zero rainfall. For this reason, the deciduous trees of the dry forest shed their leaves during the months where there is no rain. However, in the dry season some of the trees actually blossom. The corteza amarilla bursts out bright yellow flowers between March and May; the magnificent Guanacaste tree blooms cream-colored flowers, and at the end of the dry season, the malenchi explodes with vibrant red flowers. The contrast between the dry golden landscape and the bright tree flowers is truly exquisite.

Cloud forests are found in some high-elevation areas in Costa Rica. These forests are constantly enveloped by clouds, which sometimes resemble fog. This saturated ecosystem is spectacular, and you can just imagine the plant life that thrives in this environment. There are mosses, orchids, bromeliads, and ferns everywhere. Ancient plants are abundant here. There are more than 100 mammal species living within these forests, including wild cats, sloths, tapirs, and monkeys. This is also one of the places where you might get lucky enough to spot a resplendent quetzal. The cloud forests also provide valuable water to the ecosystems that are at the lower elevations. Monteverde National Park and Bralio Carillo National Park are just two places where cloud forests are present. 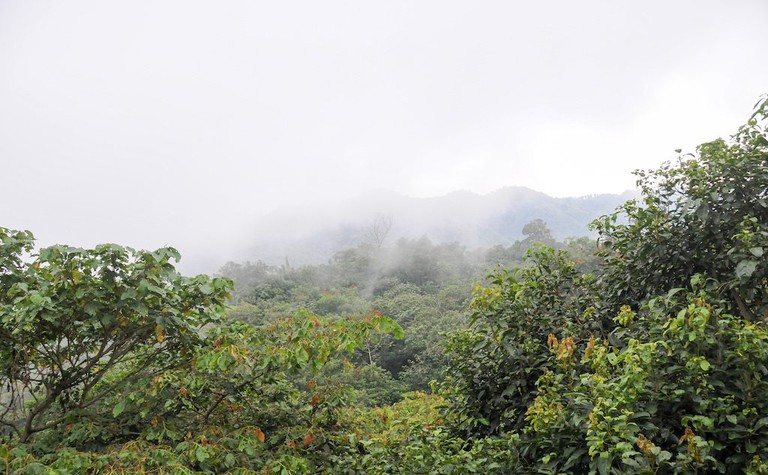 These highland-mountain rainforests are made up of predominantly evergreen trees, such as ancient oaks. Life is thriving on every single available space here, even on artificial structures. Bamboo and moss are abundant, as well as hummingbirds. There are quite a few species of plants and animals that live nowhere else outside of the mountain rainforests of Costa Rica. Taking a guided nature tour through one of Costa Rica’s highland rainforests will present you with the best opportunity to see and learn all about the plant and animal life that resides in this wet haven. The Tenorio National Park, home to the mystical Rio Celeste, is a perfect example of a highland rainforest and one that should definitely be on your list to explore. 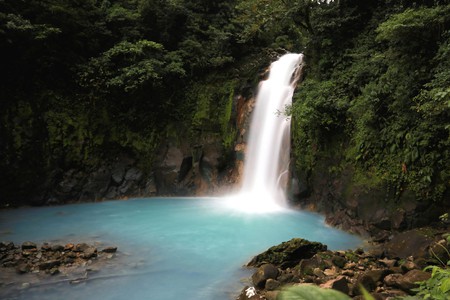 This ecosystem is only found on the southern part of the Talamanca mountain range. This is a rough and tough ecosystem for plants and animals to live in, but they do. This area is a combination of grass and scrubland. It is more arid here, so plants are a bit more dull and many have a waxy exterior. Small rodents, lizards, snakes, and some birds thrive in this environment. While it might not seem like an appealing place to visit, it is actually quite beautiful in a dramatic way. Cerro de la Muerte and Chirripo both have páramos.

Moving down a bit in elevation, we find the semi-deciduous forests. These evergreen forests sit at elevations between 1,600 and 4,900 feet (500 and 1,500 meters). The forest floor is covered by mosses and ferns and the understory is densely packed with plant life. Trees shoot up 80–130 feet (25–40 meters) in a battle for sunlight at the canopy top. Part of Rincon de la Vieja, Arenal National Park, and Turrialba National Park are made up of this type of rainforest. There are several variations in rainforest zones in Costa Rica and the difference comes from elevation, temperature, and average rainfall; all are equally as diverse and bursting with wildlife. The trees in this type of forest are singing with bird, frog, and insect calls and the air is densely humid and moist on the skin. 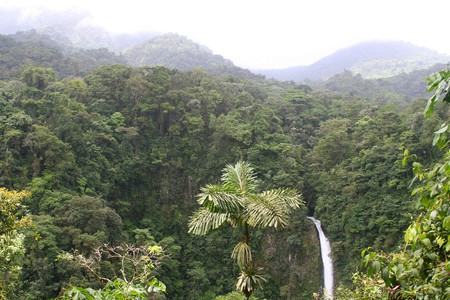 The mangrove forests of Costa Rica can only be accessed by boat and viewed from the water. Mangroves thrive in a brackish and saltwater environment. Their specialized roots are above ground and can filter out the majority of the salt from the water they take in. Mangroves also play an important role in protecting the coastlines from destruction due to strong storm swells, and they filter the freshwater that comes from land before it enters the ocean. Mangrove forests are also a nursery for many different types of fish, including baby sharks, and caimans, crocodiles, and birds. You can observe these intricate estuary forests by taking a boat tour in Drake Bay or in Tortuguero, but there are mangrove forests in multiple places along the Pacific and Caribbean coast. 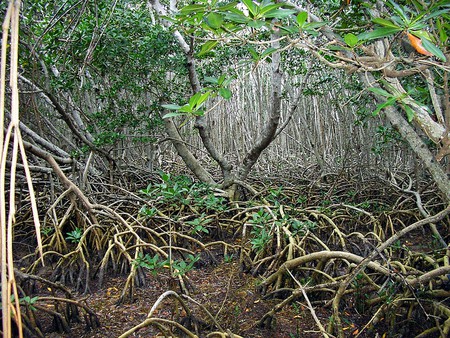 The wetlands of Costa Rica, such as Palo Verde and Cano Negro, are an important shallow-water ecosystem that hosts a variety of nesting and foraging waterbirds. The wetlands include the rivers, marshes, and seasonally inundated woodlands. They are also home to crocodiles, caimans, iguanas, bats, several species of monkeys, snakes, frogs, and a lot of insects. There are large populations of migratory and permanently based birds that call the wetlands home. Like the mangrove forests, this ecosystem can only be accessed by boat. A boat trip to either Palo Verde or Cano Negro will be an excellent opportunity to witness a lot of different animals. 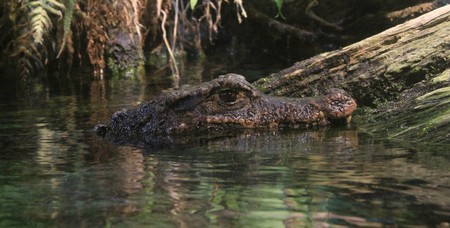 There are colorful color reefs on both the Pacific and Caribbean sides of Costa Rica. Coral reefs are an intricate ecosystem made up of symbiotic relationships between algae and the living coral (which are actually animals similar to sea anemones). The coral reefs also provide shelter and feeding grounds for hundreds of species of tropical fish, sharks, rays, sea turtles, and mollusks. Dolphins and whales sometimes visit the outer fringes of the coral reefs, as well. Coral reefs protect the coastline from heavy storm waves and swells. Some of the best coral reefs to dive are part of the Cahuita National Park, Gandoca-Manzanillo Wildlife Refuge, the Catalina Islands, Bahia Ballena National Marine Park, and the original Treasure Island, Isla del Coco. 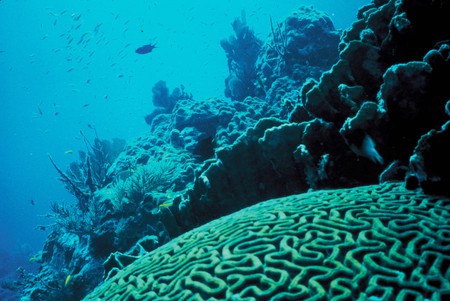 The Caribbean coastline is 125 miles (200 kilometers) long and stretches between Nicaragua and Panama. The coastal region of the Caribbean is made up of pristine and palm-tree lined beaches, mangrove swamplands, and river mouths that back up to tropical rainforest and banana plantations. The resident wildlife includes rainbow-billed toucans, chestnut-mandibled toucans, aracari toucans, white-faced capuchin monkeys, two- and three-toed sloths, boa constrictors, Jesus lizards, and iguanas, just to name a few. There is far more rainfall on the Caribbean coastline than on the Pacific coastline. 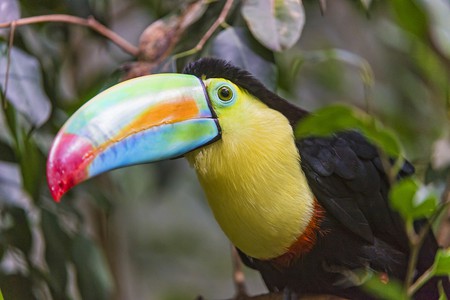 The Pacific coastline varies from north to south. The north is must more rugged and backs up to tropical dry forest and vast fields. The north region of Guanacaste is referred to as Costa Rica’s gold coast due to its warm dry weather and stunning beaches. As you head south, the forest changes from dry to rainforest. The wildlife varies up and down the coast. There is a lot more visible wildlife on the coast the further south you head, since the forests tend to meet right up with the beach and ocean, whereas in the north they are set back a bit further. Pelicans, macaws, howler monkeys, spider monkeys, white-faced capuchins, coatis, raccoons, iguanas, and sea turtles are common on the Pacific coastline.

Off both coasts of Costa Rica, the relatively shallow seas are home to both migratory and permanently based marine animals. The warm tropical waters of this ecosystem attract humpback whales, whale sharks, pilot whales, orcas, various types of dolphin, four types of sea turtle, manta rays, and multiple types of string rays. The sea around Costa Rica is rich with food ,and large predatory fish such as tuna, sailfish, marlin, and mahi mahi occupy this ecosystem too. There are amazing diving and sailing opportunities that will put you in the perfect place to possibly spot some of these magnificent marine creatures.