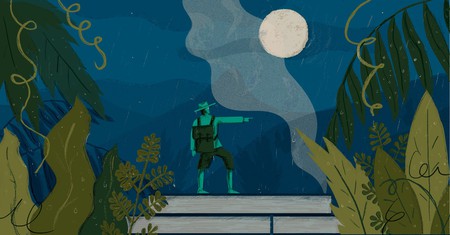 Kevin Jared Hosein’s ‘Passage’ was recently announced as the winner of the 2018 Commonwealth Short Story Prize. Each year, thousands of entries are submitted in a variety of languages, including English, Tamil, Portuguese and Swahili. Described by the judging panel as a “truly crafted piece of fiction”, Hosein’s story recounts the tale of one man’s quest to discover a mythological being living in the mountains of Trinidad. Eerie, suspenseful and moving, read the opening to Hosein’s story here.

As all Saturday nights went, we slipped by the wives and find weselves down by The Tricky Jester. The name made it sound like an establishment outta King Arthur days, but don’t get fooled – the place is just as grimy and ragadang as all them other hole-in-the-wall pubs you coulda find here in central Trinidad. Thinking bout it, you don’t see much of those any more. The Tricky Jester, you leave your shame at the door. The new places, you have to comb your hair and put on perfume just to get a drink. Times change, you know. World going one way, people another.

Last Saturday, though, something put a sour taste in my mouth. Wasn’t the fact that I couldn’t break away from these fellas I ain’t hardly ever liked, or that the new brand of beer they ordered had the aftertaste of bush-bugs. Nah, this acidic tang bubbling under my tongue come from the story Stew was telling.

Stew is a hot line supervisor. He is the man who oversees the crew that makes sure the power lines don’t catch fire. He is an important man, and so he gets to talk. After all, what goes on inside his head could keep your house from being reduced to ash. He’d remind you of that too. Get Stew loose on white rum and salt prunes and you wouldn’t think they could ever put such a man in charge of 12,000 volts.

On his spare days, Stew straps on the old spike-boots and backpack. The excursions is too much to count. Edith Falls, Rio Seco, Saut d’Eau, Turure Water Steps, and each one had a goddamn parable attached to it, like each one was a pilgrimage to Mecca. We never wanted him to stop the embellishment and the exaggeration though. As you get older, you learn to embrace daydreams.

So, how come this one put the sourness in me then?

See, Stew went out on this one hike – the mountain trail of El Tucuche. The advertised route ain’t a hard one, but not an amateur one either. Folks from abroad, selfie-stick enthusiasts, come by the vanload every weekend to brave the path. Stew is a man who don’t follow the map. He like to pride himself as a man who blazes his own trail. GPS and compasses ain’t in the recipe for epiphany. You have to learn to get lost to really find yourself, was the man’s mantra.

Stew’s hiking stories ain’t nothing too special to me, because I am a forester. Yessir, been employed at the Forestry Division, stationed at the scientific reserve, nineteen years strong. I specialize in plants. To any other man, a leaf is a leaf and a weed is a weed. A blade of grass mightn’t hold no complexity to the common eye, but mine was trained to identify family, genus, species, dentate, palmate, serrate, lobate.

I could even tell you that El Tucuche ain’t a Spanish word like many believe (including Stew), but Amerindian, meaning ‘the Hummingbird’. Don’t get me wrong – I ain’t saying all of this to look smart – just that I know the wild better than most. I done my share of climbs and rapels as a lad. I braved Gasparee Caves enough times to remember. I bathed with the turtles in Matura and scaled moras in Salybia.

A man is so small in the wilderness, believe me. The way how people is now, we ain’t tailored to live there. So when Stew say he stumble across a house in the middle of the mountain, my ears prick up. I take in every word as he describe it. A daub and wattle house in the middle of a clearing, walls slabbed with sticks and clay and dung and straw, topped with a thatched roof. 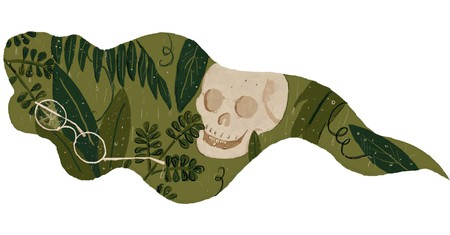 Was smoke that led him to the hut, visible just over the canopy. As he draw closer it, he noticed a doll nailed to a tree, weaved from twigs. Didn’t have no head or much of a torso – the body was just four limbs, with a rotting cloth strapped to it. As he followed the path, he saw that there was more trees and more dolls. Curious, he keep on the path till he come to a glade. At the centre was a hut. The smoke was coming from a pile of branches set at the edge of the glade, the fire long smothered.

‘Like they was barbecuin howler monkey!’ Stew say, prompting a rise of laughter from the table. I was too invested in the events to even chuckle. He then noted the sound of bone crunching beneath his heels as he approached the house.

Then he saw someone.

He remained crouched in the bush, observing them. It was a woman. She was young. Couldn’t be more than thirty, Stew say – cocoa panyol complexion, barefooted, breasts exposed, nothing on but an old sapodilla brown cloth pasted over her hips, the fabric ripping into tassels at the edges. Her hair loose in wiry kinkles.

One of the boys, Mano, lean over to Stew, ‘Forest don’t have no mirage, boy.’

Stew replied, ‘Mirage or not, at that time, them tatas was real!’ Stew wanted a closer look at the young lady. ‘Imagine what was goin through my head, fellas,’ he say. ‘Half-naked woman in the forest just waitin for me. A house to weself.’

When the woman spotted him, he thought she was gonna scamper away. Like an agouti back to its hole, he put it. It was only then he noticed how stick-thin she was. Cheeks sallow and sunken, almost like a carcass. Her feet remain planted on the ground, but he could see her toes wiggling nervously. She poised herself as if bracing for a massive blow. He glided a pace backward. Suddenly, he regretted coming up to this woman. ‘Is t’ing like that gon be the end of me, fellas,’ Stew say, lighting a cigarette.

‘What y’think? Turn round and buss outta there one time! I come straight home and vow never to covet another woman ever again,’ he say, grinning. ‘Woman coulda be La Diablesse for all I know. Temptation incarnate. All that was missin was the hoof.’

I felt a weight drop in my stomach. Most times, I don’t mind forcing myself to chuckle. This time, I was too bothered to put up any kinda front. Just something about the story throw me off – I couldn’t explain it at the time. I excused myself and went back to my car to take a smoke.

Later that night, when we was ready to go home, I pull Stew aside and asked him about the hiking route. He was hesitant at first and, for a moment, I wondered if he made the whole thing up. I was halfway hoping that he was. He gave in, however, and mapped it out for me. I recognized a landmark in his description – the Morang Waterfall. I knew I coulda find my bearings from there. When he was done, he gave me a look like I was crazy. To me, it wasn’t craziness. It was clarity. My mind was set. It was like a magnetic force – a gravitational pull.

Was then I realized it was a long time since I actually wanted to do anything. Some fellas buy a Porsche, some lie down on their secretaries, some go to Miami. Me? I was determined to find this mystery woman. Yessir, I was gonna climb that mountain.

First published on Granta Online where you can read the short story in full.