Off the coast of Grenada and Cancún in Mexico, divers that explore the tropical pristine waters may stumble upon the sombre army of life-size sculpted human figures instead of the coral formations that they may be looking for. These are the creation of artist Jason de Caires Taylor and are a unique addition to the underwater world of this tropical paradise. 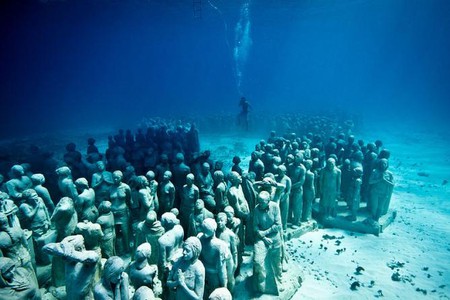 Scuba divers off the coasts of Mexico and Grenada expecting to find sea floors bursting with colour and teeming with life may find themselves in for something of a shock. A silent army of life-size concrete figures is part of the project, ‘The Silent Evolution’, by the artist Jason deCaires Taylor, an English-Guyanese sculptor who created his first underwater sculpture park in Molinière Bay, Grenada. Since 2010, over 400 of his works form the basis of the Museo Subactuático de Arte (MUSA) off of the coast of Cancún, Mexico.

In place of the intricate patterns of natural coral formations and the biodiversity which usually surrounds these formations, divers may come across what seems to be a pile of forgotten bodies nearly consumed by algae, over which skitter the occasional crustaceans.

Cancun Underwater Museum is a non-profit organisation which is devoted to Art of Coservation and features 500 underwater sculptures. The museum has three different galleries that are submerged between three and six meters and display the works of Jason deCaires and five other Mexican sculptors.

DeCaires’s figures stand in silence, their eyes squeezed shut, their faces sombre. They are all cast from living individuals. To add to the sense of poignancy, the faces’ individual characteristics gradually disappear under a layer of artificial coral growth. This is, however, the intention. As the stony appearance of life recedes, it gives way to a vibrant ecosystem of new reef.

DeCaire’s art can also be found in The Bahamas where the sculptor has created an ‘Ocean Atlas’ which spans from the sea floor upwards five meters to the surface of the sea. These colossal sculptures have been inspired by the ancient Greek statue of Titan Atlas holding up the heavens. DeCaire, however, depicts a local youth supporting the ocean ceiling. The sixty ton ‘Atlas’ has become the largest single sculpture to be installed in an underwater landscape.

The series of these sculptures have been commissioned by The Bahamas Reef Environmental Education Foundation and the aim of this underwater sculpture garden was to pay tribute to its founder Sir Nicholas Nuttall. The sculptures are made from sustainable PH-neutral materials and create an artificial reef for marine life, but also help to draw tourists away from over stressed natural areas.