Slow Burn: How the Meticulous Craft of Cigar Making Put Cuba on the Map 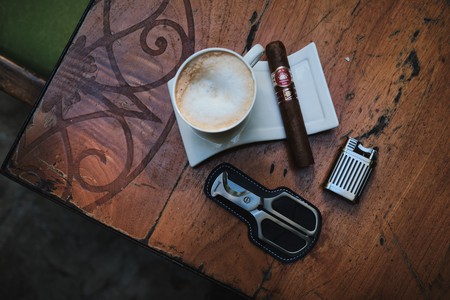 The full appreciation of a Cuban cigar requires time, attention and, above all, patience. It’s a kind of meditation, slow and satisfying. Just like travelling across Cuba requires dedication and perseverance to truly understand the island’s rich history.

Hector Luis Prieto arrives at his plantation three hours late but beaming a smile that admits no fault and invites no blame. This is Cuba. For 24 years Prieto has been the owner of Finca Quemado de Rubi in the Vuelta Abajo, Cuba’s famed tobacco-growing region in the west of the country. In 2008 Prieto was named Habanos Man of the Year for his production of fine wrapper leaves, which to this day “dress” some of the most prestigious cigars that Cuba has to offer.

Hunters and Frankau, the UK’s exclusive importer of Cuban cigars since 1790, attests to the superior quality of Cuba’s most famous export by welcoming visitors to its site with the sentence: “There are just a few things in the world that are known without question to be the best of their kind. A Habano – or Havana cigar – is one of them.” 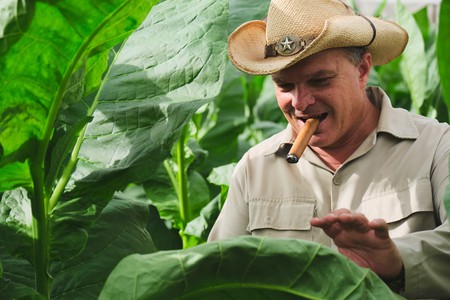 Tobacco, together with sugar, has been one of Cuba’s most lucrative commodities, making cigars very much a symbol of the island. Cigar smoking became popular in Europe during the 17th century when the Spanish conquistadors brought it back to Spain after seeing the local Taino population in Cuba smoking twisted rolls of tobacco leaves as early as the 15th century.

Cigars were all made by hand in Cuba during the 1800s, and production techniques were perfected during the peak of popularity of the burgeoning Habanos brands in the late 19th and early 20th century. Cuban cigars today remain made totalmente a mano (entirely by hand): the creation of a Cuban cigar is thought to involve more than 300 individual processes and a single leaf may be touched by 40 different hands. 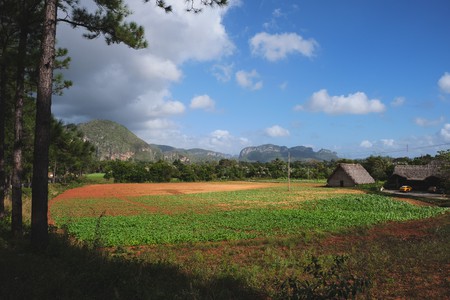 Various failed attempts at mechanisation were made over the years, which speaks to the incredibly high standards required to roll these famous cigars. Only whole leaves are used in “long-filler” cigars, and they must be burned from the tip to allow flavour to intensify throughout the smoke. The combination of three types of tobacco – seco for aroma, ligero for flavour and volado for combustion – is a decision for the master blenders, and no machine could handle the delicate wrapper leaf – the flawless skin of the cigar – without tearing it to shreds. Heritage and tradition remain essential to the continued supremacy of the Habano product.

Three hours at Prieto’s plantation is the perfect time to put into practice the patience of a cigar lover. Although a working farm, with pigs and hens running free and vegueros (farm workers) strolling through with machetes hanging from their belts, the finca has been slowly turned into something of a tourist attraction. Small group tours come through on a semi-regular basis without intruding too heavily on the production. 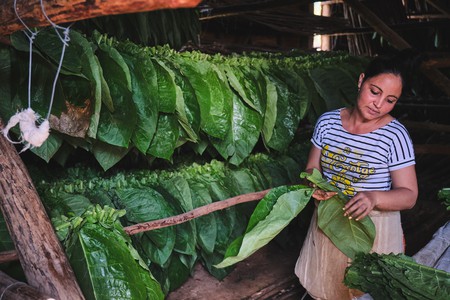 The wooden single-storey buildings, painted blue and white, include a two-bedroom guesthouse and, of course, a walk-in humidor, which sells only the plantation’s own custom-rolls – all of them enormous and all of them delicious hearty afternoon-killers.

“Growing tobacco is one of the oldest traditions of our country. Sugar cane and coffee came with the Spanish, but the indigenous people were already smoking “cigars” when they arrived. So, you can imagine how much I love my cigars!” Prieto proclaims. 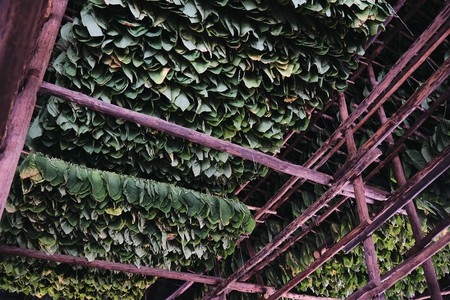 “The tradition that has been passed on through generations,” he explains, “I respect that and I love it. It’s a commitment to be responsible for all this land and also to prepare my son for the next generation.”

Prieto’s respect for Cuban culture is visible in the way cigars are produced at his farm. The complete lack of mechanisation in his operation is not exclusive to his finca, however, Havana cigars are still rolled by hand in the traditional way.

Prieto strongly believes that this should never change, even if it means the industry struggles to meet the rising demand from new markets. “It would be better for the price of cigars to increase, rather than the quality to decrease,” he says. 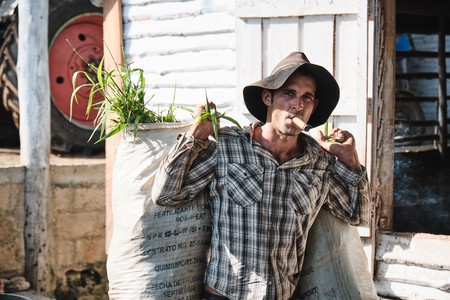 The farming cannot be mechanised or intensified, and neither can the region be made bigger. “There are three factors which make this tobacco unique: the experience of the people, the seeds [which are government controlled] and the soil,” says Osvaldo Diaz, a senior member of the team.

“In the Vuelta Abajo the soil is very pH neutral – about 5.9 or 6. It also has a unique set of nutrients which affect everything from nicotine content to elasticity in the wrapper leaf,” he says. This cannot be reproduced elsewhere – and many have tried – which means the Havana cigar will always have the appeal of exclusivity. 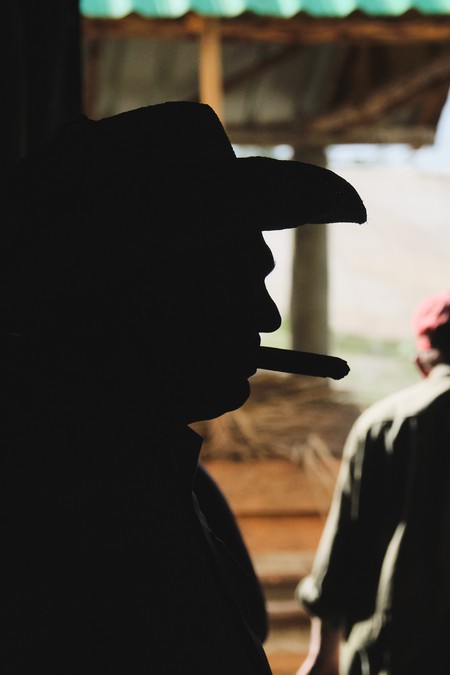 In Havana, the love of cigars is nevertheless reaching new audiences. Along with older, noticeably wealthy tourists, an increasing number of young Chinese travellers can be seen smoking cigars in all the hip places, from the leafy lobbies of the luxury hotels around Parque Central to the slowly gentrifying pockets of Habana Vieja, where superb casas particulares (homestays that pre-date Airbnb) and boutique restaurants abound.

Daer, a young waiter in one such restaurant, plays a part in the new trend. “I’m a member of a club run by the industry that meets once a month to smoke and to discuss cigars. The idea is to develop knowledge and passion for cigars among a younger audience,” he says. 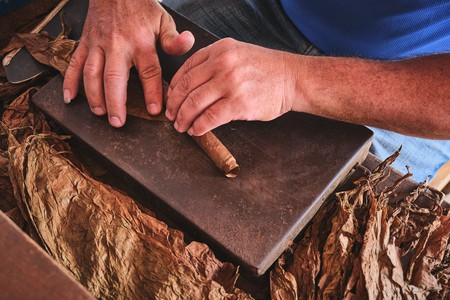 Not everyone in Cuba smokes cigars, of course, and if they do they often smoke the puros (cigars made with tobacco from one single region) rather than the prestige brands that are the most coveted in the world. However, the extent to which ordinary people on the island partake in something often seen as a luxury in the rest of the world, makes cigars smoking seem like a more proletarian form of recreation. The old lady sitting at the kerbside selling a handful of cigars from a cup is a far cry from the walk-in humidor at Davidoff of Geneva. So why does that accessibility fail to translate to the cigar culture of Europe?

“Cigars are kind of classic,” explains Calum Conn of Casa del Habano in Chester, “they seem to have this fixed place in culture that transcends fashion to an extent.” Far from the pinstripe-suited banker stereotype, Conn sports long dreadlocks and a pink bandana, and is the youngest retailer to gain the Master of Havanas qualification offered by Hunters and Frankau. “People still buy cigars for the same reasons – weddings, births, celebrations. There are definitely cigar smokers who just want to flaunt their cash, but we don’t see too much of that here. We see a reassuring number of regular people buying a cigar as their weekly treat; a hobby rather than a habit,” he says. 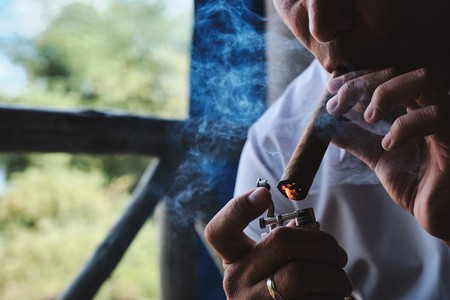 Yet, the association with an unattainable lifestyle endures.

The idea that cigar smoking is relegated to old-fashioned, exclusive gentlemen’s clubs might deter some people from delving into what can be a satisfying pastime (despite the obvious health risks which accompany any type of smoking). But it is also a blessing that Cuba is yet to feel the pressure of mass demand. It would certainly be a shame if visitors were faced by machines instead of dozens of skilled cigar rollers or torcedores, and tractors and harvesters crawling the green fields of Pinar del Rio.

Perhaps that is part of the joy of smoking a Havana cigar: the traditions and knowledge of generations of Cubans are slowly released in the fragrant smoke. It’s a piece of Cuban patience you can take anywhere.

With special thanks to Cuba Direct https://www.cubadirect.co.uk and Finca Quemado de Rubi http://www.hectorfinca.com/en/.