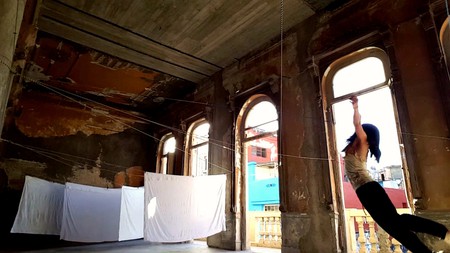 Contrary to what many people think, Cuban rumba did not originate in slave plantations, but rather in solares—the areas where freed slaves lived after slavery was abolished in 1886. It began as a marginalized type of get-together—rumba is also a synonym of “party”—where people of African descent would play music and chant while dancing very rhythmic dances.

For a long time and until the social changes brought about by the government that took power in 1959, rumba was perceived negatively as a vulgar cultural expression of poor and uneducated people. Rumba, now recognized as a valuable part of Cubans’ intangible heritage, is taught in dance academies and dance companies such as Conjunto Folklorico Nacional de Cuba, and Danza Contemporanea includes rumba numbers in their presentations. 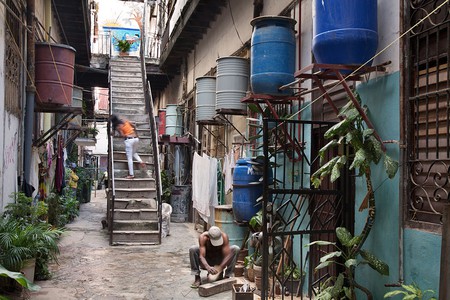 Rumba originated in poor communal buildings (solares) outside cities and near the docks | © Jorge Royan / http://www.royan.com.ar, via Wikimedia Commons

What exactly is rumba?

Rumba may refer to either the music (both percussion and singing) or the dance, which, when combined, are the center of a traditional African-Cuban performance.

Musicians perform the music with three drums that have different names (quinto, salidor, tres golpes) and differ in size and sound. Wooden boxes are also used sometimes, depending on what’s available. Other instruments include claves, which can also be replaced by spoons, and some bands use marugas or chekeres. 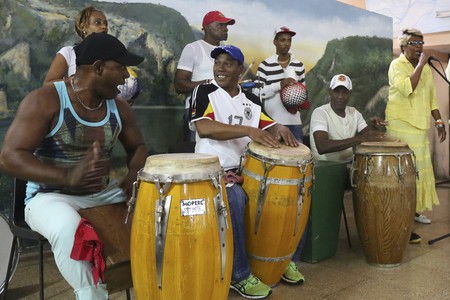 A very good way to understand rumba is to have a look at its most original form: the solar rumba (as opposed to more artistic forms designed for theaters, ballrooms, and international tours). The central patios of poor communal buildings where freed slaves and their descendants lived after abolition were the natural scenarios for rumba. Someone would start drumming on a wooden box, someone else would join in by striking a pair of sticks (or spoons), and more and more people would show up to take part in the party.

Younger people would dance to faster rhythms, in ways that were either more powerful and acrobatic or more sensual, while older folks would get their chance to dance too but to slower beats, more in agreement with their age.

While all these folk dances may look the same to outsiders, there are three main styles of rumba: Columbia, guaguanco, and yambu, which are very easy to differentiate if you go back to the above description of the solar rumba.

Columbia is the powerful acrobatic style; originally danced only by men, in recent years, more women have started to dance Columbia. Think of it as a form of moderate breakdance in which younger guys show off their physical might and skills, performing complicated jumps, sometimes challenging and mocking other dancers with their moves.

Guaguanco is the sensual variant, performed by a couple. In the dance, the man attracts the attention of the woman with his moves, trying to approach her to inject her with his seed (a move known as “vacunao,” which translates as vaccination). The woman, on her part, moves away from him, playfully trying to avoid the contact, which at the same time is a strategy that keeps the dance going.

Yambu is a slower type of rumba, which is more compatible with older people’s ability to move and more appropriate for their age. There is no sexual tension or metaphoric penetration in this one.

Where to see rumba in Havana

From private parties to carnivals to theater performances, there are all kinds of places to see rumba in Havana. One of the best options is a weekly rumba show at the Callejon de Hamel, taking place every Sunday from noon to around 4 p.m., where it’s possible to see rumba and other types of folkloric dances.

There are also festivals that happen only once a year, but keep an eye out in case your trip coincides with any of these events in Havana: the Timbalaye International Rumba Festival in August and the Guillermo Barreto in Memoriam International Drum Festival in March.

There are many places that offer rumba dance lessons as well, including Baila Habana and Salsabor Cuba.