24 Hours in Havana, Cuba: Where to Eat, Drink, and Sleep 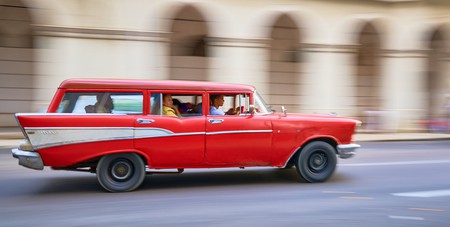 A city with over 500 years of history, Havana has dozens of points of interest that can be explored in two to three days by taking advantage of well-organized city tours offered by emerging private businesses. But if you only have one day to see it all, here’s a guide that covers some of the main historic sites, new restaurants, traditional food, peculiar forms of transportation, cigars, Mojitos, a souvenir market, a trip to the beach, and salsa dancing.

Except for hotel restaurants, few places are opened in Havana before 8:00 a.m., so it may be a little hard to have breakfast before that time (unless your accommodation provides an option). But this precious hour of daylight can be used to walk to one of the cafés that will open at 8:30 a.m., and enjoy the local architecture on your way there, before the sun is too high.

In addition to enjoying a hearty breakfast to get ready for a long day of exploration, at Cafe Arcangel you’ll be able to try excellent Cuban coffee—a must in a country with such a strong coffee culture—have a look at how emerging private family businesses operate, and how they are changing the face of the country.

Take it slow after breakfast: walk to Parque Central and use some of Havana’s iconic buildings in that area as a background for your selfies. Nearby attractions include the Capitol Building, the first statue of National Hero Jose Marti ever installed in Cuba, Hotel Inglaterra and Hotel Telegrafo—two of the oldest hotels in the country—a sports stadium named after one of Cuba’s greatest boxers of all time—Eligio “Kid Chocolate” Sardiñas, the Grand Theater of Havana (headquarters of Cuba’s National Ballet Company), and the place where President Barack Obama addressed the Cuban people during his visit to Havana in 2016.

A short walk away from Prado Street is the Partagas Cigar Factory—exactly behind the Capitol Building. You can take a tour of the factory to learn all the details about cigar production, and see some of the best cigar rollers in the world doing their jobs. If you want to buy cigars to take back with you, there’s a cigar store at the entrance of the factory.

Time to enjoy some of the sights while sitting down: walk to Parque Central and take the Havana Bus Tour (T1, headed to Vedado). Sitting on the top deck you’ll be able to see a large number of important buildings and places in Old Havana, Centro Habana, and Vedado: the Morro and its iconic lighthouse, the Malecon, the U.S. Embassy, the Anti-Imperialist Grandstand, the Casa de las Americas Cultural Center, and 23rd Street, among many other interesting places.

Take off at the Revolution Square stop to see the historic square where Fidel Castro and his followers celebrated the oust of dictator Fulgencio Batista in 1959, and where many of the subsequent changes to the country’s economy and politics were announced. Flanked by large size images of Rebel Army Commanders Che Guevara and Camilo Cienfuegos, the square has a tower at the center and a statue of National Hero Jose Marti. At the base of the monument, there’s a memorial that gives access to the tower’s top floor, the highest point in Havana and therefore an excellent place to take pictures and see Havana from above.

To the left side of the square, you will find a number of vintage convertibles waiting for tourists to approach and hire their services. At a rate of approximately 30 C.U.C. ($34 U.S.D.) per hour, you can use these rides to see other parts of Havana not covered by the Havana Bus Tour, and take more selfies of you riding a car that’s over 60 years old. Ask the driver to organize the ride so that the trip ends in Old Havana.

Try Cuban seafood in one of the many restaurants in Old Havana. Although in terms of food it’s always better to go with one of the new private businesses, some of the state-run restaurants in this area are not bad options, including El Templete, El Patio, and La Mina. They are all within walking distance of La Bodeguita del Medio, if you fancy stopping by to see the place, take pictures outside, or even ask for one of their famous Mojitos without having to wait in line to get in.

3:30 p.m.—Hire a CocoTaxi to go to the San Jose Souvenir Market

Motorbike taxis shaped like yellow coconuts called CocoTaxis abound in this part of the old quarter, and it’s easy to find one willing to take you to Almacenes de San Jose, the biggest arts and crafts market in Havana. From trinkets and key chains, to bags, original paintings, and photographs, you will find plenty of options here if you want to buy some presents.

Hire a maquina to take you to Santa Maria Beach, one of the best sections of Playas del Este, a long beach strip to the east of Havana. Maquina is a popular term to refer to old American cars with hard rooftops. Unlike vintage convertibles and other collectible cars, they are cheaper to maintain, and will offer lower rates for longer distances. They are great for trips to the beach, since they have plenty of room and are not delicate cars that can be affected by a little sand or wet clothes. 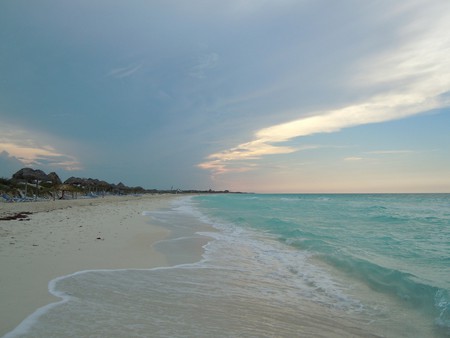 Return to your accommodation, shower, and get ready to get on the road again.

Roasted pork, fried plantains or yucca, white rice, black bean soup, and a salad are the basic components of a traditional Cuban meal that you can have in most Cuban restaurants. Also typical are Ropa Vieja, tamales, congris or moros y cristianos (rice and beans). Some of the most popular restaurants serving Cuban food are La Guarida, Doña Eutimia (closer if you are staying in Old Havana), La Paila, and El Cimarron (for those staying in Vedado).

There are plenty of places to see salsa dancers in action in Havana, and you can join them, or even take a free lesson from an enthusiastic Cuban willing to teach you. Another great option for a night out in Havana is the Cuban Art Factory, a cultural center where visitors can enjoy visual arts shows, live performances by different types of bands, and great drinks.