The Ultimate Guide to Partying in the British Virgin Islands 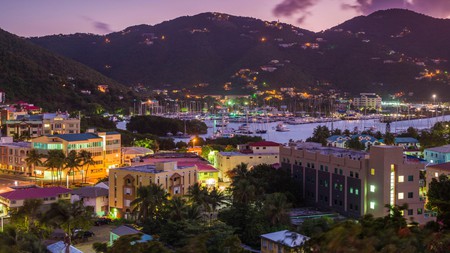 The British Virgin Islands may conjure images of deserted white beaches, quiet sailing and secluded anchorages, but it’s not all peace and quiet. Alongside the lush scenery, this colourful archipelago fizzes with Caribbean culture. From dancing under the stars at the plentiful full-moon parties to sipping rum cocktails to the tune of live steel drums, we round up the best spots to enjoy the humming nightlife in the BVI.

Party your way around the British Virgin Islands by hiring a boat through Dream Yacht Charter. Alternatively, bag a yacht for the day with SamBoat.

Which of the BVI are best for nightlife?

Head to Tortola, the largest island in the archipelago, to pay a visit to Road Town – the capital of the BVI. This lively town also happens to be the party capital of the archipelago, with live music and dancing throughout the bars and clubs until the early hours. Visit the nautical-themed Pusser’s Pub and the open-air Dockside Bar, which has live music on Friday and Saturday nights. As a key BVI yachting hub, Road Town also has sheltered harbours, plenty of mooring opportunities and marinas in the centre of town for a short stumble home. Alternatively, head over to Cane Garden Bay on the north side of the island for the Paradise Club. This buzzing beach bar has live music and full-moon parties with psychoactive mushroom tea (don’t worry, it’s legal) while firepits and tiki torches light up the beach.

Spanish Town on Virgin Gorda is the second-largest town in the BVI. After a day exploring the Baths – a beach with giant, granite boulders – to the south, head over to CocoMaya in the heart of town for sundown cocktails next to a flaming firepit. 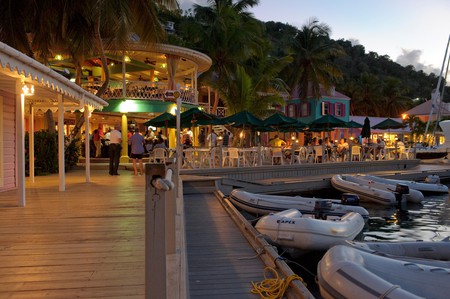 Which bars are best to visit and why?

Sail to White Bay on the southern side of the volcanic island Jost Van Dyke for a visit to the beachside watering hole of Soggy Dollar Bar. Named after the sailors who swam ashore to pay with wet banknotes, Soggy Dollar Bar is where the original Painkiller cocktail was created; a moreish and deceivingly punchy mix of dark rum, pineapple juice, orange juice, and cream of coconut with a dusting of nutmeg. The surroundings are equally as appetising with ruffling palm trees and far-reaching ocean views. Also on Jost Van Dyke is the legendary Foxy’s Bar in Great Harbour. Foxy himself has been serving customers since 1968 with travellers lured back by his winning combination of calypso song recitals, weekend beach barbecues and strong rum cocktails. 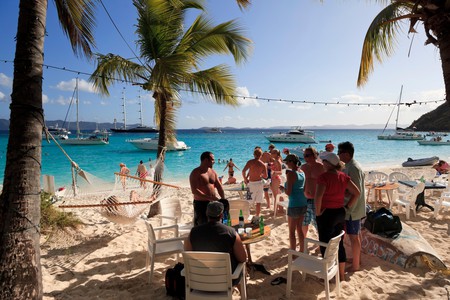 The family-friendly full-moon party on Trellis Bay in Beef Island is particularly popular for its mix of live music, moonlit barbecues, and giant metal fireballs, which light up the night sky. Get there early though – the mooring balls fill up early on the day of the party, though anchoring is also a possibility if you turn up late.

Cane Garden Bay on the north side of Tortola also makes a great mooring spot. The shore is rich with bustling nightlife, with lively bars and restaurants lining the beach. The Paradise Club is the perfect spot for live music with laid-back Caribbean beach vibes, while the colourful beachside hotel Quito’s Gazebo offers daily happy hours accompanied by live music and a menu stuffed with fresh seafood, from grilled lobster to fish tacos.

Alternatively, head to Saba Rock, an idyllic island resort, just north of Virgin Gorda. Moor overnight here (for a fee) and sip piña coladas at the Sunset Bar. Arrive in time for live music from 4pm to 7pm everyday, followed by a few games of pool after dinner. 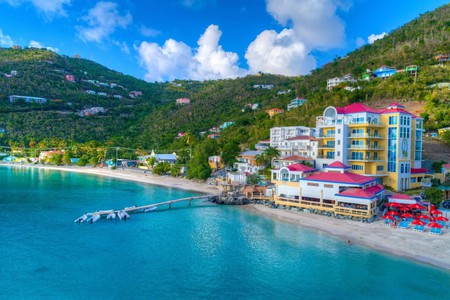 How to get to the British Virgin Islands