Oranjestad on the island of Aruba | © Darryl Brooks / Alamy Stock Photo
Located on the southern coast of the Caribbean island of Aruba, Oranjestad serves as the island’s capital and largest municipality. Between tours, long days relaxing at the beach, and shopping for souvenirs, visitors need to eat. Luckily, Oranjestad is home to some of the best restaurants on the island, with many serving a wide variety of international cuisines. Here’s a list of 10 of the best.

Bar, Restaurant, Caribbean
Oranjestad on the island of Aruba | © Darryl Brooks / Alamy Stock Photo
Situated just off of Oranjestad Harbor, 7 West Bar & Restaurant is the ideal place to relax and take in stunning views of boats bobbing in the calm Caribbean waters. Originally named for their location on west 7th street (7 Weststraat), this restaurant is mainly known for its very reasonably priced gourmet-inspired menu, which is sometimes difficult to find in a resort town like Oranjestad. Stop by for lunch and order one of 7 West’s inspired platters which usually feature some kind of fresh fish.
More Info
Open In Google Maps
7 Westraat, Oranjestad, Aruba, Bonaire & Curacao
+2975889983

Opened 23 years ago by Dutch transplants Hans Nooter and Harry Koeman, Café the Plaza has been a favorite for quite some time. Situated in Oranjestad’s Renaissance Marketplace, this café is the ideal place to grab lunch or dinner after a couple hours of shopping. What’s truly special about Café the Plaza is their flexibility. The restaurant serves food all day, from pancakes in the morning, to strong drinks at night, while you can’t go wrong stopping by for a sandwich at lunchtime either. 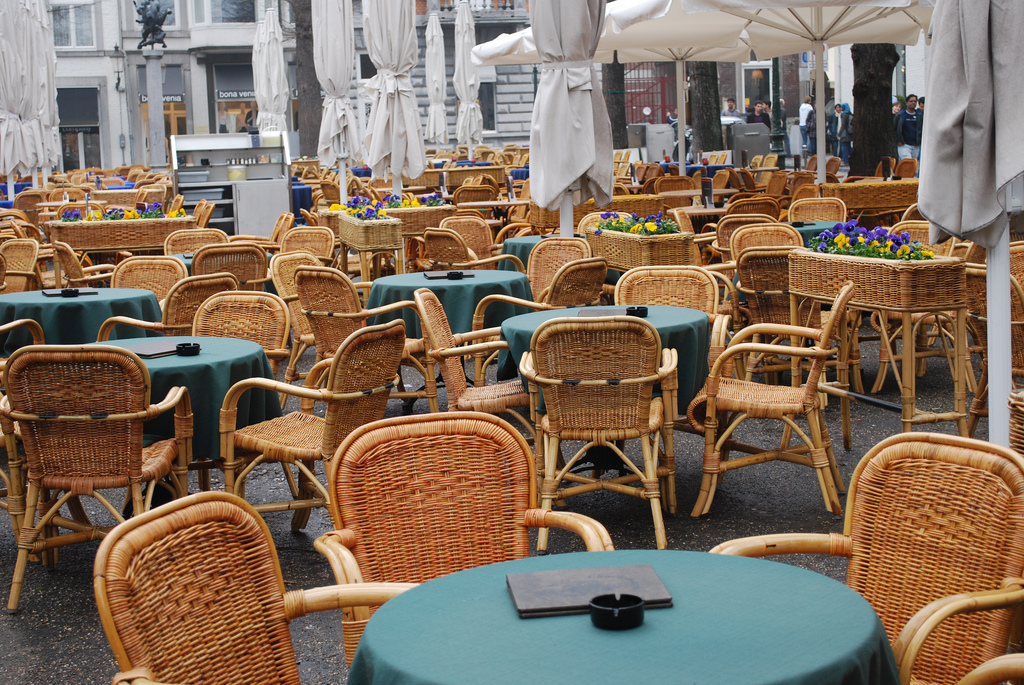 Restaurant, Caribbean
Big breakfast with bacon and scrambled eggs | © Elena Veselova / Alamy Stock Photo
Like Café the Plaza, CILO City Lounge is conveniently located in the Renaissance Marketplace and is open all day for breakfast, lunch and dinner. Try one of CILO’s city-inspired breakfasts, such as the New York, featuring two scrambled eggs, bacon, sausages, fruit, yogurt and toast with butter and jelly, while enjoying a view of the bustling Oranjestad marina from the restaurant’s terrace. In the evening, come with friends and relax with half-off drinks during happy hour.
More Info
Open In Google Maps
Oranjestad, Aruba, Bonaire & Curacao

Restaurant, Bar, Cuban, $$$
Ropa vieja | © Sergii Koval / Alamy Stock Photo
For a taste of Cuba in the heart of Oranjestad, head over to Cuba’s Cookin’ in the Renaissance Marketplace. Owner Douglass Markus has infused the space with Cuban charm through the dishes, music and art that he has accumulated from many trips to the Big Island over the past 15 years, so much so that it evokes a ‘Havana resto bar circa 1959’ feel. Try one of the restaurant’s traditional Cuban dishes, such as pollo con aceitunas (chicken and olives), or ropa vieja (braised skirt steak), and wash it all down one of their ‘world famous’ mojitos.
More Info
Open In Google Maps
9 Lloyd G. Smith Boulevard, Oranjestad-West Oranjestad, Aruba, Bonaire & Curacao
+2975880627
Visit website

Bar, Restaurant, Caribbean
Yacht Harbor on Aruba | © Darryl Brooks / Alamy Stock Photo
Poking its way out into the waters of the Caribbean Sea towards the north end of Aruba’s windward side, The West Deck is a lively, family-friendly drinks and dining spot that comes highly-recommended. The menu offers up a medley of uber-fresh fish cuts doused in a range of different regional sauces (think mahi mahi in black beans, or calimari with a twist of chilli), while the half al fresco design makes for some fine views of the gigantic cruise ships that arrive and depart to and from the city each day.
More Info
Open In Google Maps
Lloyd G. Smith Blvd, Oranjestad, Aruba, Bonaire & Curacao
+2975872667

Restaurant, Argentina, $$$
Beef steak | © hlphoto/Shutterstock
Located in a refurbished colonial townhouse, El Gaucho Argentine Grill was the first Argentinian restaurant to open on Aruba in 1977. Since then, the restaurant has made a name for itself by serving the biggest and, some say, best steaks on the island, even receiving an Aruba Business Award in that category in the past. While the menu mainly features a large selection of Argentinian-style grilled meats, there is also a nod to El Gaucho’s Aruban locale, with a section devoted to Carib seafood. Try the famous one-pound Gaucho steak, or the Argentine shish kabob, a skewer containing pieces of grilled beef tenderloin, chorizo, pork tenderloin and vegetables.
More Info
Open In Google Maps
80 Wilhelminastraat, Oranjestad-West Oranjestad, Aruba, Bonaire & Curacao
+2975823677
Visit website

Restaurant, Caribbean, $$$
Renaissance Hotel Aruba | © Norman Pogson / Alamy Stock Photo
Located by the Renaissance Hotel in downtown Oranjestad, Yemanja Woodfire Grill is a hip local restaurant specializing in Caribbean-European fusion. The woodfire grill, for which the restaurant is named, is fueled by wood from the island, so diners can literally taste the essence of Aruba in every delicious bite. Fortunately, Chef Joyce Husken and her kitchen staff are happy to accommodate many dietary restrictions, an extra level of dedication most restaurants don’t typically offer. So, whether you go for gluten-free or vegetarian, you’ll be able to enjoy a meal at Yemanja.
More Info
Open In Google Maps
2 Wilhelminastraat, Oranjestad-West Oranjestad, Aruba, Bonaire & Curacao
+2975884711
Visit website

Even though Wilhelmina is just a recent addition to Aruba’s gastronomy, it’s already a popular dining destination in Oranjestad. The restaurant is named after the Dutch Queen, Wilhemina, who was adored far outside the borders of the Netherlands, and honors her far-reaching influence by serving an internationally inspired cuisine with ingredients from all around the world. The cuisine of each dish on the menu is designated with a small flag, proving it’s completely possible for French bouillabaisse and Chinese Peking duck to coexist peacefully on the same card.

Bistro, Italian, Ice Cream
For a refreshing treat on a hot day, head over to Gelatissimo Bistro located in the heart of downtown Oranjestad. This bistro and gelateria is housed in a traditional Dutch-style colonial building, but the offerings on the menu are uniquely Italian. For lunch, try one of the bistro’s pizzas, paninis or salads, all for very reasonable prices. However, just be sure not to miss Gelatissimo’s selection of gelatos (Italian-style ice cream) and sorbets made from fruit grown on Aruba itself.
Looks like it's closed Hours or services may be impacted due to Covid-19
More Info
Open In Google Maps
1 Havenstraat, Oranjestad-West Oranjestad, Aruba, Bonaire & Curacao
+2975837996
Visit website