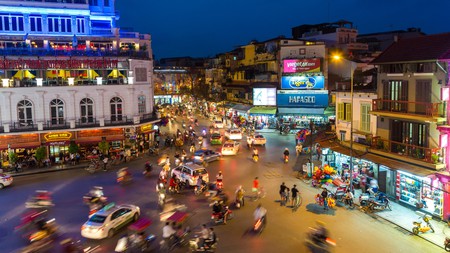 Hanoi, the cultural capital of Vietnam, is full of things to see and do – we’ve rounded up the best for you.

A few days in Hanoi don’t do it justice, but, luckily, most attractions are located within walking distance of one another. So, you can easily map out an itinerary for yourself and enjoy a day of wandering around, taking in the contrasting beauty of the old and new. Make sure to visit as many of these attractions as possible to fully experience Hanoi. 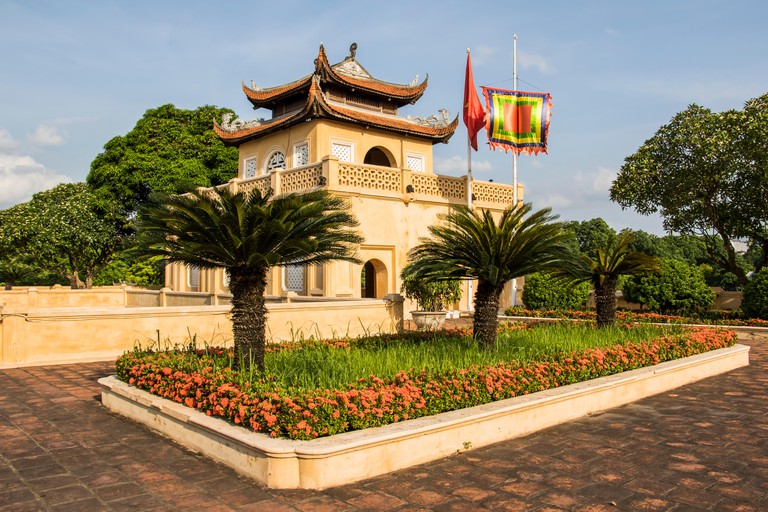 © Design Pics Inc / Alamy Stock Photo
This Unesco World Heritage site, often used as a symbol of Hanoi, stands 40m (130ft) tall. The complex comprises the royal enclosures built during the Lý Dynasty and is close to many other attractions in Hanoi. It’s closed on Mondays. 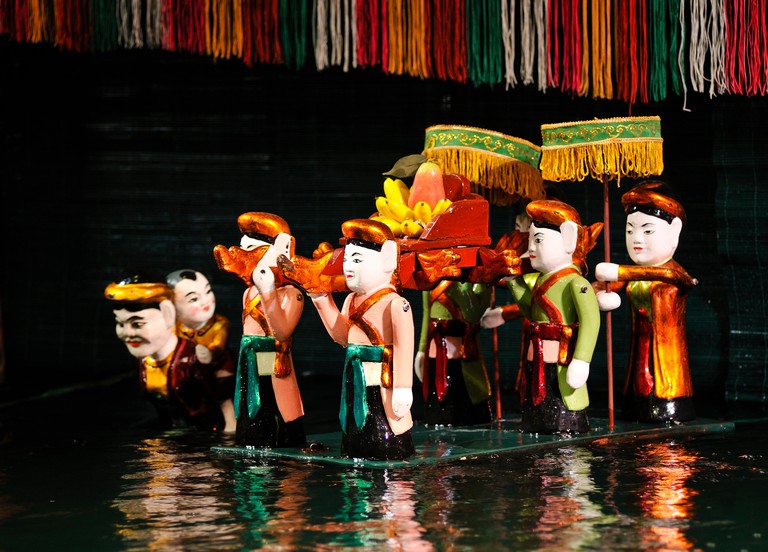 © Gerhard Zwerger-Schoner / imageBROKER / Alamy Stock Photo
The ancient art of water puppetry has long been associated with Hanoi. Watch as puppets dance elegantly – controlled by a whole troupe of puppet masters – telling a story of the famous Legend of the Restored Sword of King Le, which is about Hoàn Kiếm Lake and a giant tortoise. 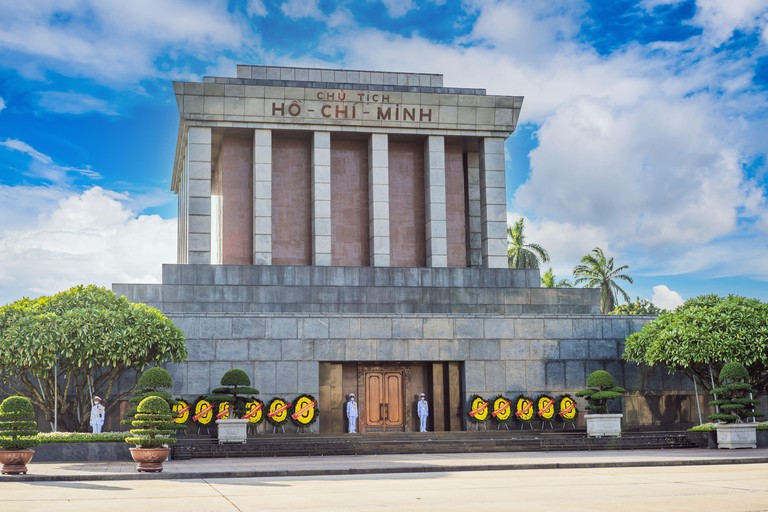 © Elizaveta Galitckaia / Alamy Stock Photo
Ho Chi Minh was one of the most important leaders in Vietnamese history. His body is preserved in this mausoleum, laid to rest in a glass case so that visitors can pay their respects. Modest dress and quiet reverence are prerequisites while you’re inside the mausoleum.

Park
Facebook
Email
Twitter
Pinterest
Copy link
Share
Hoàn Kiếm Lake (Turtle Lake) is a popular hangout spot for locals and foreigners. On an island in the centre lies Ngoc Son Temple, linked by a graceful red bridge. It serves as a fabulous background for photos, and you might catch couples doing their engagement photoshoots here. 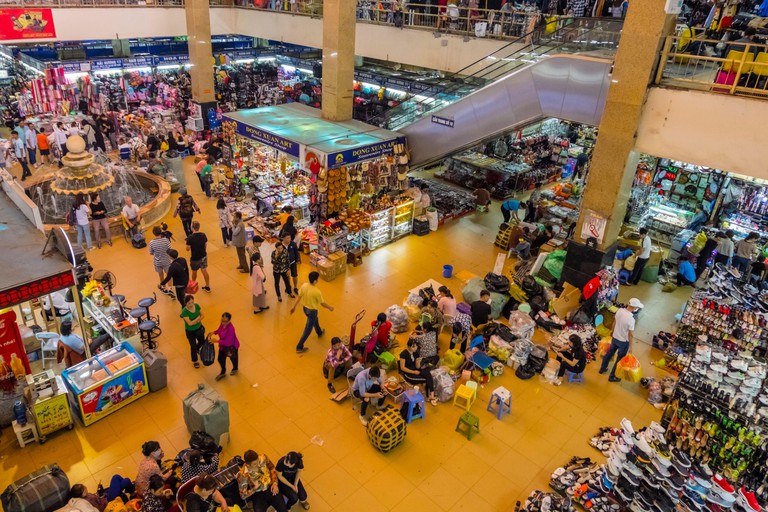 © Peter Forsberg / Alamy Stock Photo
Đồng Xuân Market is the largest market in Hanoi. It is four storeys high, and you can find all sorts of apparel, electronic items and food here. It is great for some shopping or to just experience the day-to-day life of the locals. You can practise bargaining here, as it is a popular tourist destination, and prices quoted are likely to be inflated.

Hanoi Old Quarter is a lively area where travellers can enjoy many fine examples of colonial architecture packed into narrow streets. This is the ultimate shopping spot in the city, and it is full of cafes and restaurants, where you can indulge in some delicious Vietnamese cuisine. You can explore it with Culture Trip on our specially curated 12-day Vietnam adventure. 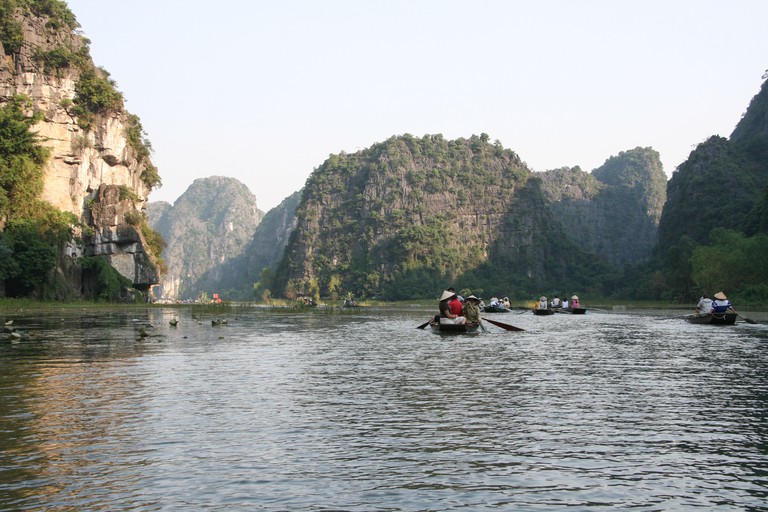 © Inaki Olavarrieta Moro / Alamy Stock Photo
Built in the 15th century, this series of Buddhist temples has been carved into the rock of the mountain range, with rich forests and flowing streams all around. It’s a little way from Hanoi – about 60km (40mi) – but definitely worth the trip.

Forest, Park
Facebook
Email
Twitter
Pinterest
Copy link
Share
Located around two hours from Hanoi, Ba Vì National Park is a nature reserve famous for peaks, viewpoints, waterfalls and old French colonial churches and prisons. You can even find natural hot springs on the forest floor. It’s easy to spend a whole day here exploring before enjoying a meal at the restaurant near the entrance. 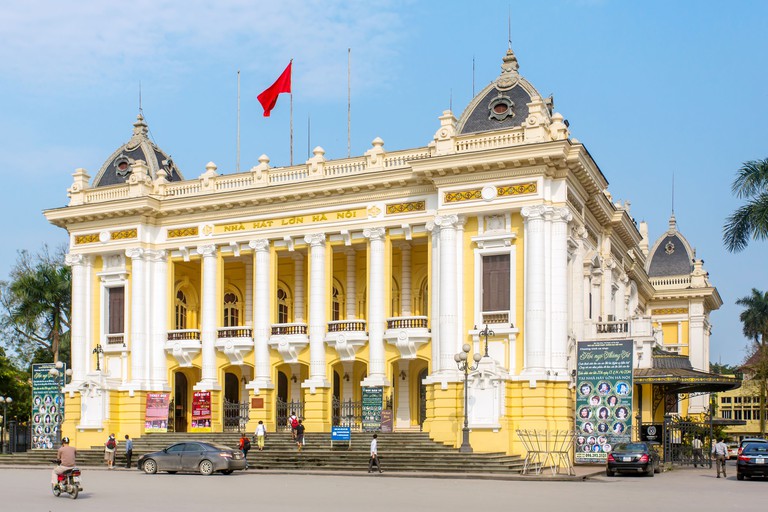 © Aliaksandr Mazurkevich / Alamy Stock Photo
Built in 1911, this is one of the most elegant buildings in all of Hanoi, and visitors can enjoy opera and dance performances here to this day. It was modelled on the Paris Opera House, and the intricate design is even more magnificent at night when the cream-coloured floodlights are turned on. 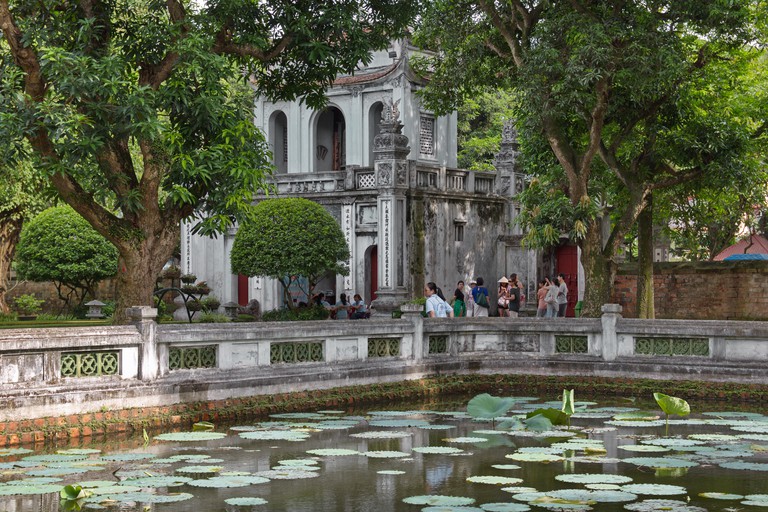 © Keith Mundy / Alamy Stock Photo
This charming temple complex hosts the Imperial Academy, the oldest university in Vietnam. It was built in 1070, during Emperor Lý Thánh Tông’s dynasty, to serve as a centre of learning and was dedicated to the Chinese scholar Confucius. 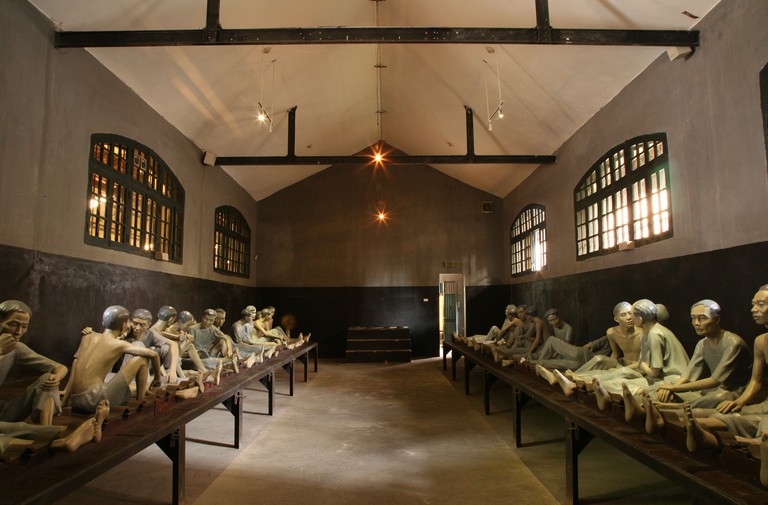 © Feargus Cooney / Alamy Stock Photo
This prison was built by the French in the 1880s and was sarcastically named by American prisoners of war as the Hanoi Hilton. Hoa Lo literally means “stove” – it certainly was no Hilton. Senator John McCain was held here after his capture, and his uniform is on display.

Museum
Facebook
Email
Twitter
Pinterest
Copy link
Share
This museum showcases the 54 different ethnic groups in Vietnam, all under one roof. It is interesting to browse through the displays and learn about the ethnic history of Vietnam. It’s closed on Mondays. 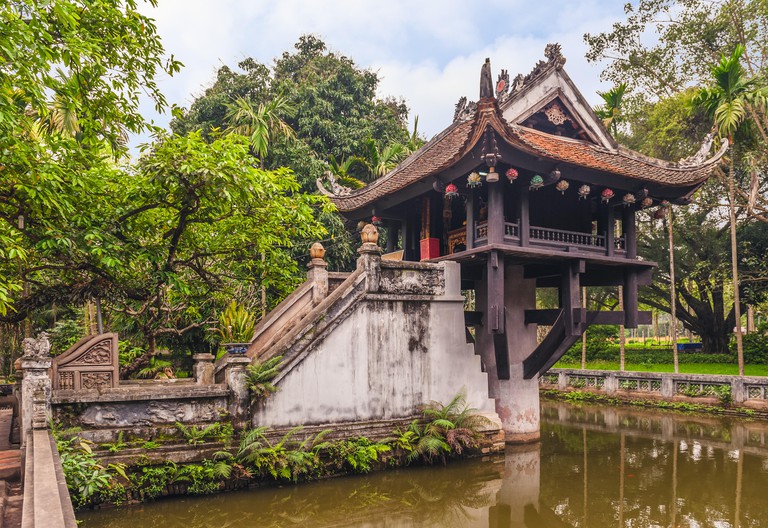 © Jui-Chi Chan / Alamy Stock Photo
This pagoda is built on a single wooden pillar that’s just 1.3m (4.3ft) in diameter. The story goes that heirless Emperor Lý Thái Tông dreamt that he met Quan Am, the Goddess of Mercy. Soon after, he married a young peasant girl who gave him a son. The pagoda was built between 1028 and 1054 to express his gratitude to the goddess.

Cathedral, Church
Facebook
Email
Twitter
Pinterest
Copy link
Share
This was one of the first structures built by the French colonial government in Indochina. Construction began in 1882 and finished in 1886, and the whole church was built in a neo-gothic style, modelled after the Notre Dame in Paris. Mass is still held inside several times a day. 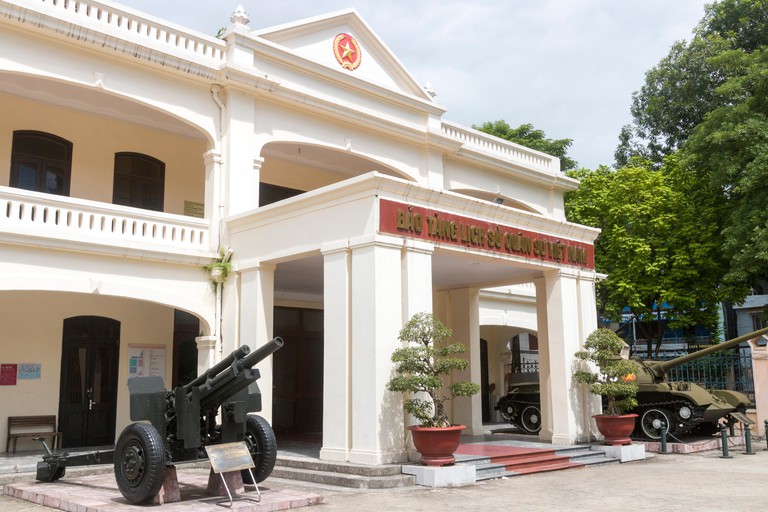 This is one of the seven national museums in Vietnam and is perfect for those interested in wartime artillery. There are both indoor and outdoor displays of military artefacts, some dating from as far back as the Hung Vuong era, which is considered the official start of Vietnam’s history. 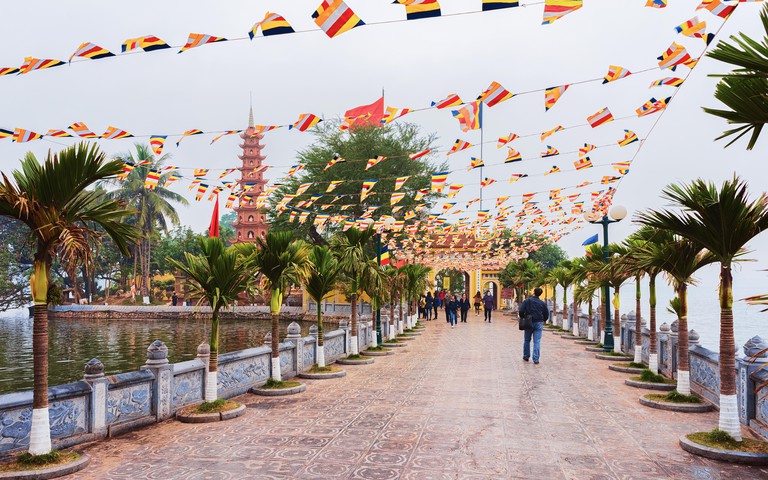 © Roman Babakin / Alamy Stock Photo
This is the biggest freshwater lake in Hanoi. Located right in the centre of the city, it makes for a perfect evening walk. You can easily get to other places nearby, and there are plenty of restaurants, bars and shops here to explore. Great photo opportunities await. 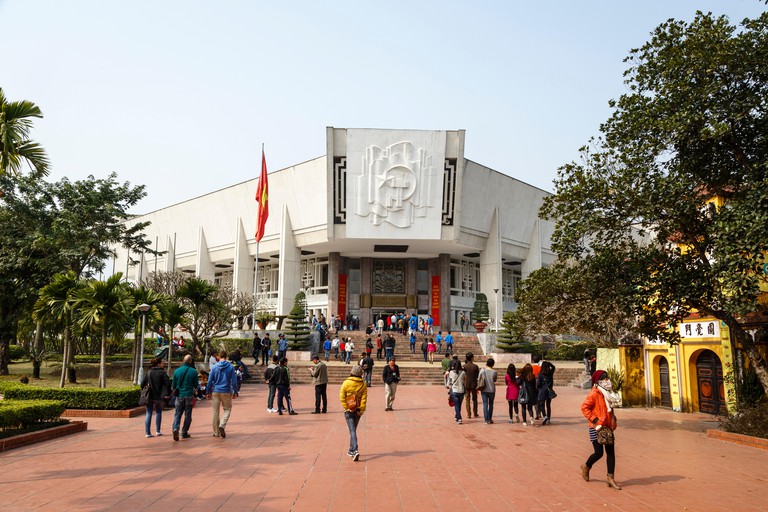 © Yadid Levy / Alamy Stock Photo
This museum is dedicated to the late Vietnamese leader, Ho Chi Minh, referred to lovingly as Uncle Ho. His life is chronicled in eight different sections, running from his upbringing and youth to his travels, ideologies and founding of the Vietnamese communist party. English descriptions are available, and the museum is closed on Mondays.

Bridge
Facebook
Email
Twitter
Pinterest
Copy link
Share
Designed by the French and built by the Vietnamese with indigenous construction material, this bridge runs across the Red River, connecting the two districts of Hoàn Kiếm and Long Biên. 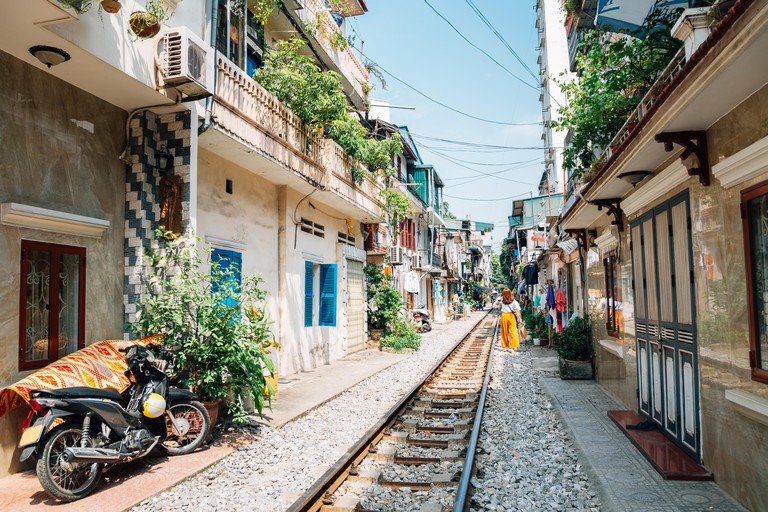 This is a narrow street in the Old Quarter, where train tracks running right down the middle allow trains to pass terrifyingly close to the houses. The daily life of the locals has to be packed up multiple times a day when trains are scheduled to pass. It’s somewhat similar to Maeklong Railway Market in Thailand.