Where To Stay: The Best Neighbourhoods in Bangkok 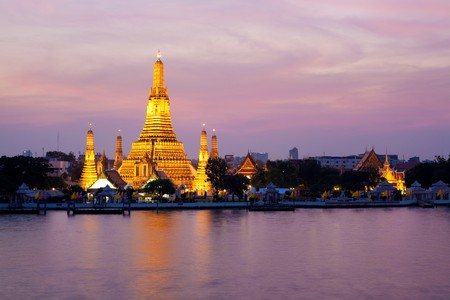 From neighbourhoods with royal roots to those with secret sois (sidestreets) stuck in the ’70s, this round-up of the best areas in the Thai capital will help you decide where to stay in Bangkok.

Bangkok is a vast city of almost 1,500 square kilometres (579 square miles) and contains within it a diverse range of neighbourhoods. Whether you’re a backpacker looking for the bare basics or an eco-warrior seeking a verdant pocket of peace in the chaos of Thailand’s capital, this neighbourhood guide will help you decide the best place for you to hunker down. 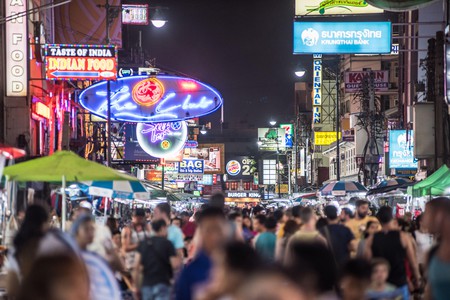 The neighbourhood of Banglamphu is better known by its main strip – Khao San Road. For late nights and booze-fuelled benders, this is where the party starts and ends. It’s known as a backpacker’s haven and caters to this crowd through its many budget bars, cheap restaurants and general late-night revelry. Those who want to dip a toe in the action without skimping on sleep can stay in one of the nearby sois, which usually have more dining options and fewer stalls.

By day, hike up the Golden Mountain at Wat Saket for its city views, and then stroll the grounds of Mahakan Fort. Feeling flush? Try the crab omelette at Michelin-star street-food diner, Jay Fai. Just don’t expect any change from 1,000 That bahts (£25.60). Stay at the Lamphu Tree House Boutique Hotel or The Warehouse Bangkok.

Chinatown for street food, speakeasies and a gigantic Buddha

Chinatown has been home to Bangkok’s Chinese community for over 200 years. The neighbourhood is formed around Yaowarat Road, a strip that runs just west of Chao Phraya River to Hua Lamphong train station. The main street – and the warrens of lanes surrounding it – are chock-full of food stalls hustling for space outside stores selling gold trinkets and treasures.

Drop by Wat Traimit to see the giant Golden Buddha in its 5.5 tonnes of brilliance, before heading to the Yaowarat Chinatown Heritage Centre on the lower floor. Come nightfall, check out Soi Nana for its speakeasy bars.

The abundance of street food in this area makes it the perfect place to stay for foodies, but don’t limit yourself to what you can buy from the stalls. Hua Seng Hong serves expertly made dim sum in a family-friendly space, while Yim Yim dishes up homestyle Chinese food – and has been doing so for around 80 years now. Stay at Shanghai Mansion Bangkok or Loy La Long Hotel.

When Bangkok became the capital of Siam in 1782, Ko Rattanakosin was declared the royal district home of the ruling Chakri dynasty. The local Chinese community was moved to Yaowarat Road (now Chinatown) to make room for the Grand Palace and Wat Pho, the Temple of the Reclining Buddha.

The neighbourhood’s architecture and layout were modelled after the ancient city of Ayutthaya – the second capital of the Siamese kingdom before it was razed to the ground in 1767. Surrounded by the Chao Phraya River to the west and canals to the east, the island of Ko Rattanakosin is accessible by boat from Tha Chang Pier.

Explore the Amulet Market to find protective jewellery crafted by artisans and blessed by monks. Across the street is Wat Mahadhatu, a centre that offers daily informal meditation classes. For upmarket Thai street food, dine at Err and head to Rongros for post-dinner cocktails and to watch as the sun sets over Wat Arun. Stay at Sala Rattanakosin or Arun Residence.

Lumphini for a pocket of peace near the city centre 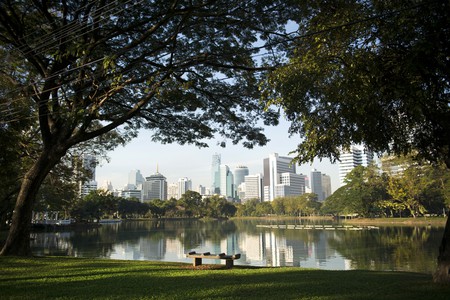 Lumphini Park is a verdant oasis, which is a rare find in Bangkok | © Sunphol Sorakul / Getty Images

Lumphini is a welcome respite from Bangkok’s frenetic streets. With shaded lakes, running tracks and outdoor gyms spread across 57.5 hectares (142 acres), this park is nothing like the rest of Bangkok.

Join one of the free outdoor aerobics classes or come for music concerts on weekends. Nearby, Wireless (Witthayu) Road gleams with new condos and sleek hotels, while food lovers and oenophiles flock to Lang Suan to check out the natural wine bar Wet, a collaboration between chef Gaggan Anand and his long-time sommelier Vladimir Kojic. Stay at Luxx XL or Hotel Muse Bangkok Langsuan.

Silom is a finance centre by day and a red-light district by night, known for its go-go bars and late-night entertainment. It’s also the heart of Bangkok’s gay scene, which is concentrated in Sois 2 and 4. But between the clubs and bars, the neighbourhood is also gaining a reputation as the hub of Bangkok’s international dining scene, with modern fusion fare plated at Eat Me Restaurant and Greek cuisine replete with plate-smashing antics found at Aesop’s.

The neighbourhood is served by both Silom Metro and BTS Skytrain via Sala Daeng Station and is located in the centre of the city, just south of Lumphini Park. Stay at SO Sofitel Bangkok or CLOUD on Saladaeng.

Sathorn for workers by day and well-heeled partygoers by night 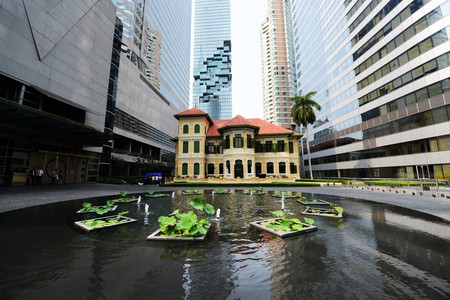 The central business district is lined with gleaming glass high-rises and cloud-piercing skyscrapers, one of which includes the famous King Power MahaNakhon, Bangkok’s tallest tower. Pop up to the 76th floor for a drink at SkyBar, or dare yourself to walk across the glass-floored SkyWalk.

While the neighbourhood is primarily for workers rather than travellers, it’s a good place to indulge in the finer things among a well-heeled jet-set crowd. Find some relaxation with a massage at Health Land, or sip on late-night cocktails at The House on Sathorn, set within a 130-year-old colonial mansion that was once the Russian Embassy. You can also learn how to make a few Thai dishes at the famed Blue Elephant Cooking School. Stay at W Bangkok or All That Bangkok.

Charoen Krung is known for its gracefully ageing 19th-century buildings, which line the banks of the Chao Phraya River. It’s a neighbourhood in the midst of gentrification and has recently become home to a host of creatives, designers and writers.

A prime example of its transformation is the Warehouse 30, a collection of World War II-era spaces that have been transformed into a contemporary creative space replete with cafés, bars, boutiques and galleries. For a rooftop with a cinematic view, travellers flock to Sky Bar at Lebua, as seen in The Hangover Part II, showcasing the snaking river view below its 63rd-floor balcony.

Siam for malls, stores and stalls and people who like to buy things from them

While not legally a neighbourhood, Siam is a well-known area that residents consider to be the heart of the city. If shopping is at the top of your Bangkok to-do list, then hit the crossroads, where you’ll find Siam Paragon, MBK Centre and Siam Discovery – vast malls that cater to all budgets from cheap to designer chic. Those who prefer to steer clear from shops should probably avoid this area, but there are a few cultural sights worth making a beeline for.

The Jim Thompson House Museum is dedicated to the silk magnate credited with reviving the silk industry in the wake of WWII. Located just around the corner from there is the Bangkok Art and Culture Centre, five floors of modern exhibition space dedicated to local art and handicrafts. Siam is served by two BTS stations (National Stadium and Siam), making it a great base from which to explore the rest of the city. Stay at Hua Chang Heritage Hotel or Pathumwan Princess Hotel.

Sukhumvit, a road to Cambodia lined with all-day, all-night shops, restaurants and bars 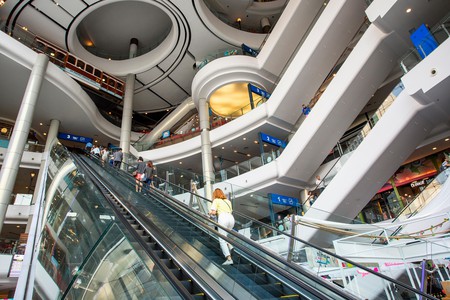 Stretching from Bangkok to the border of Cambodia, Sukhumvit ranks among the world’s longest roads. But the central section, around BTS Asok, is a commercial centre with shopping, food and nightlife that stays open until the wee hours. It’s home to the notorious Soi Cowboy, a red-light sidestreet, as well as the cultural organisation Siam Society.

For shopping, lose yourself in nine floors of stores at Terminal 21, and then refuel with Thai food at Cabbages & Condoms, a restaurant that helps fund a number of health programs across Thailand. Stay at Sofitel Bangkok Sukhumvit or 3Howw Hostel Sukhumvit 21.

Thong Lor for artists who like coffeeshops, brunch and galleries

Thong Lor is Bangkok’s hippest neighbourhood. Clustered around Soi Sukhumvit 55, the area has some great Japanese restaurants, themed cocktail bars and an all-round artistic atmosphere. The hub of this neighbourhood is theCOMMONS, which boasts a range of food stalls, craft coffee shops and live music all day. Head out for brunch at Luka Moto, and at night, try the tasting menu at Bo.lan.

Travelling freelancers will appreciate The Hive Thonglor, a co-working space with a rooftop for events. Those seeking a nightcap can find craft cocktails at Iron Fairies, a uniquely themed silversmith workshop, or at the gallery-bar WTF. Stay at Cabochon Hotel & Residence or Hostel at Thonglor.