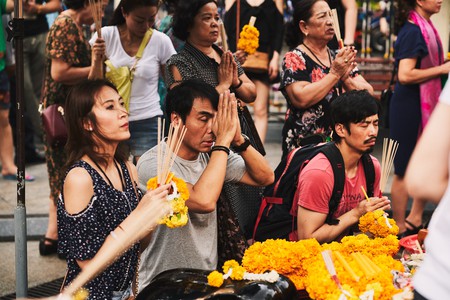 It’s an unusual place to commune with omnipotent forces, with its car-horn cacophonies and multi-tiered concrete conduits, flanked on all sides by some of the world’s largest megamalls. But right in the middle of the maelstrom is one of Bangkok’s holiest shrines, Erawan, where residents’ hopes and dreams are made. 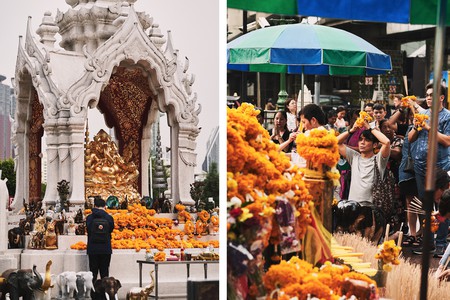 Located just down the road from Erawan Shrine is Trimurti, where worshippers come to pray for luck in love | © Benjamin McMahon / Culture Trip 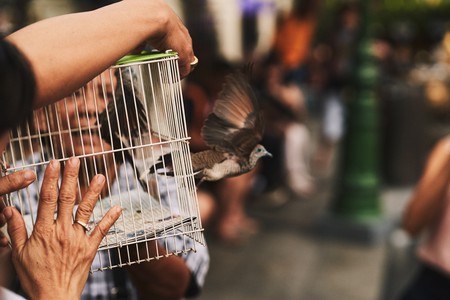 When she was 17 years old, Noon Rakchanok took the Skytrain to the Siam district in the commercial heart of Bangkok. She wandered along the busy skywalk, past streams of people laden with shopping bags, growing increasingly nervous. She tuned out the grunt of the traffic from the congested road below and prepared to do something she had never done before: ask the gods for a favour. 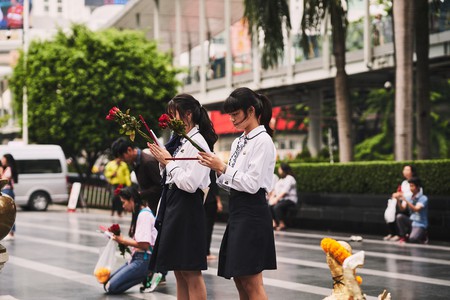 “I didn’t know whether it would work or not, but I begged for the gods to help me get into Thammasat University,” says Rakchanok.

She bought some incense sticks and candles from a little stall at the shrine’s entrance, as well as a garland of marigolds to drape at the feet of the golden, four-faced Brahma statue. That day – as it always is – Erawan was surrounded by crowds of faithful worshippers and desperate agnostics, all praying for something just outside of their control.

Rakchanok was asking for something substantial – potentially life-changing – and she knew that those offerings alone wouldn’t cut it. “I said to the god that if it would come true, then I would pay him back by buying a Thai dance,” she says.

Paying for these traditional dances to honour the gods is considered a fair trade and not a bribe. And like all good quid pro quo agreements, the terms must be mentally agreed upon in advance, right down to the specifics, like how many dancers are to be paid for.

If the prayers are answered, then it’s necessary to head back to the shrine to give thanks – and to pay the gods in song and dance. Never short of business, the gods usually enjoy a full timetable of performances. 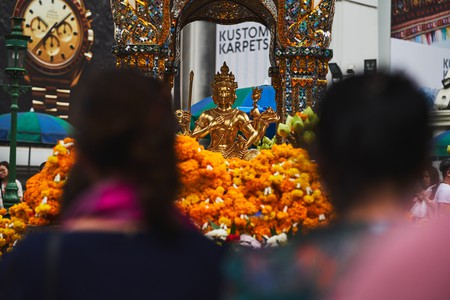 ‘I always pray for what I can get, not more than I expect’

Flecks of grey have started to salt their way into Bubpa Surin’s hair, which she has pulled back tightly into a ponytail. Facing the Erawan Shrine, she kneels on a mat to pray while eight dancers begin to sway behind her. They’re wearing colourful dresses of green and yellow, or red and blue, bedecked with patterns of white sequins. Each of their gold hats, shaped like stupas, is adorned with a single red rose.

The dancers move gently in time with the rhythm of the plinky-plonky live music. The sound melds with the traffic, the churn of trains and the footfalls of thousands of shoppers. It’s hardly a tranquil environment. However, Bubpa Surin’s face is a portrait of serenity.

Tomorrow, Surin will head to the port, where she will board a cruise ship that will be both her home and place of work for the next three months. “I just want to return safely,” Surin says. Cruise ship work is too lucrative to pass up. But a life at sea is a risk, and she is not taking any chances. “I pray both before and after I go – it’s just the way it works for me.”

Within minutes, it is over. Surin gets up, and somebody else takes her place, to pay off their spiritual debt. A price chart on the wall nearby lists the costs for however many dancers one wishes to pay for. Surin – like many others – has paid for the full complement of eight dancers. 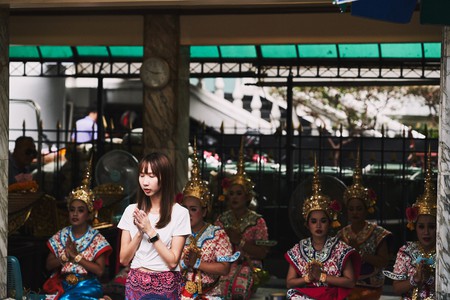 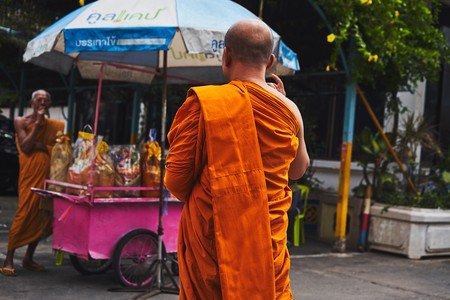 “At Erawan, I always promise to pay for the maximum,” says Kan Sangtong. “What have I got to lose? If my request comes true, then it’s worth it because I’ve already gained something, and if it doesn’t, then I don’t have to pay for the dancers.”

Sangtong is 32 and tall, with a good head of wavy black hair, which he’s sad about having to cut in a few weeks for his graduation ceremony, having just completed a master’s degree in political science. A hairstyle with a short back and sides for men at these events is still mandatory in Thailand.

Unlike Surin and Rakchanok, Sangtong’s wish is not quite so clear cut; there’s nothing like an acceptance letter or safe passage to serve as a litmus test. Nevertheless, he purchases the usual accoutrements, holding the incense up to his forehead in supplication before lighting it and placing it among the others.

Sangtong is from a rural area to the north of Bangkok, but the city is now his home. The problem is, his partner wishes to stay in their hometown. “Lately I have been praying that she and I will be OK and find a solution,” he says.

When he’s finished, he admits doubt. “I haven’t always had success. I didn’t get what I wanted in the past because I didn’t have enough merit,” he explains. But he’s also noticeably calmer and more philosophical about his situation.

“In Thai Buddhist belief, there are ways to increase your merit,” Sangtong explains. “Meditation and donations of food, money, knowledge or forgiveness all count.” But there is one much greater way for men in Thailand to gain merit – a way that is usually reserved for the most sacred of trades. 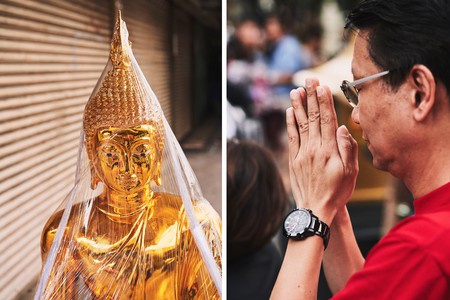 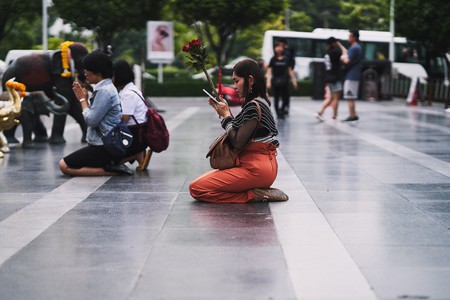 ‘I asked them to spare my father’s life’

Samphawo Bhikkhu has just entered his eighth year as a monk. “My first intention was to become a monk for just 15 days,” he says, rearranging his bright orange robes around his shoulders as he reminisces.

A decade ago, he prayed that his father’s life would be spared for a few more years after he was diagnosed with cancer. When this blessing came to pass, Bhikkhu upheld his end of the bargain and ordained himself at a local temple.

“After 15 days as a monk, I wanted to know more about what the Buddha taught. About enlightenment.” While it is not uncommon for monks to take the cloth in this way, this type of trade is far less frequent than paying for dancers.

“When I graduate my ninth year of studying, I’m thinking to go out into the forest and make my quest for enlightenment real,” says Bhikkhu.

Bhikku’s life was radically altered after fulfilling his pact. Yet the gods have been a boon to countless other lives in subtler, less tangible ways – by inspiring confidence, helping people navigate periods of uncertainty or simply by being allies in a struggle that may otherwise feel lonely.

There are always factors that are out of people’s reach. And for many, that’s ultimately when it’s time to enlist a god’s help, to assist with the uncontrollable elements and as a way to navigate a complex world. “After my successful first experience, I continued to believe in the gods,” says Rakchanok, who graduated from her first-choice college, Thammasat University, a few years ago.

“You can’t just wish it, of course. Your actions must support your wish,” Rakchanok says. “When I applied for university, I needed the grades. But most of the [selection process] is something that I cannot see or control.”

For Thais like Rakchanok, life’s victories aren’t solely attributed to blessings from the gods. But irrespective of how much sway the supernatural has over life’s circumstances, these trades are a way of showing gratitude to the gods for the good things that happen. And what better way to do it than with musicians, dancers and fellow devotees? 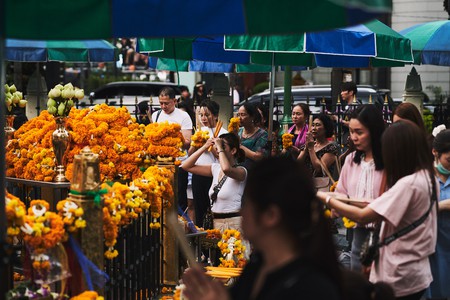