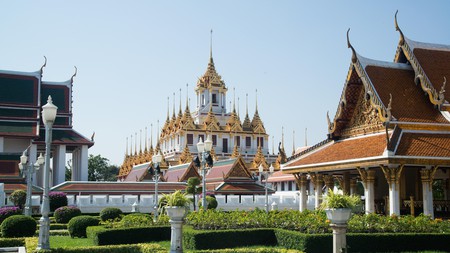 Temples in Bangkok are so much more than mere tourist attractions. For many Thais, these religious sites are woven into the fabric of everyday life – places to pray for hope, good fortune and forgiveness. Here’s a guide to Buddhist temples in Bangkok where you can experience the city’s spiritual side.

Buddhism is an inextricable part of daily life in Bangkok. This is a city where locals feed stray dogs as a way to gain good merit. Where spirit homes are tucked behind homes, shops and alleyways. It’s a place where people go to shrines when they have a big life decision to make, ready to strike a bargain with the gods if necessary. And nowhere is this faithful way of life more obvious than in the capital’s beautifully ornate temples.

Spend an afternoon in Wat Phra Kaew, home of the Emerald Buddha 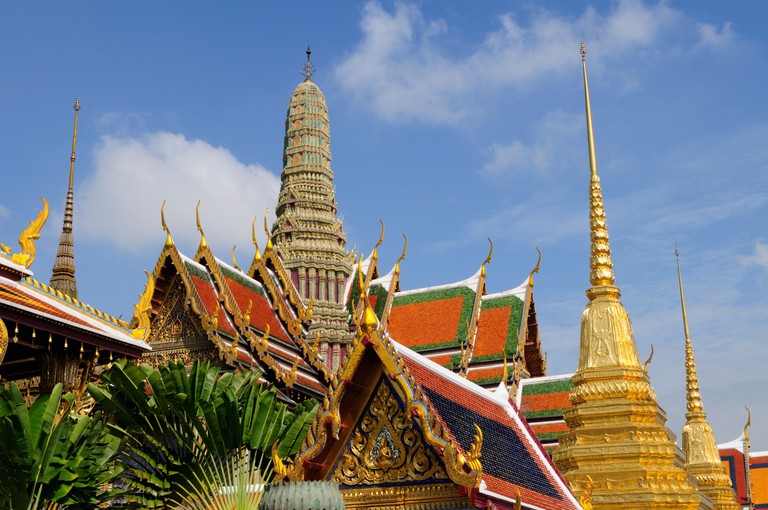 © Alistair Laming / Alamy Stock Photo
Book Now
No self-respecting city temple guide would be without Wat Phra Kaew. This indecently beautiful site sits on the grounds of the Grand Palace and is home to many prized historical artefacts, of which the most beautiful and religiously significant is arguably the statue of the Emerald Buddha. According to local legend, the statue was unearthed in Lanna Kingdom (now Northern Thailand) in the 15th century and was moved from temple to temple as per the whims of each new ruler. When King Rama I ascended to the throne, he moved the precious green statue to the Grand Palace, the seat of the newly founded Siam Kingdom, and installed it in its new home in Wat Phra Kaew’s ordination hall, where it still stands to this day.
Open In Google Maps
Khwaeng Phra Borom Maha Ratchawang, Khet Phra Nakhon Krung Thep Maha Nakhon, 10200, Thailand
+66627215708
Visit Website
Give us feedback 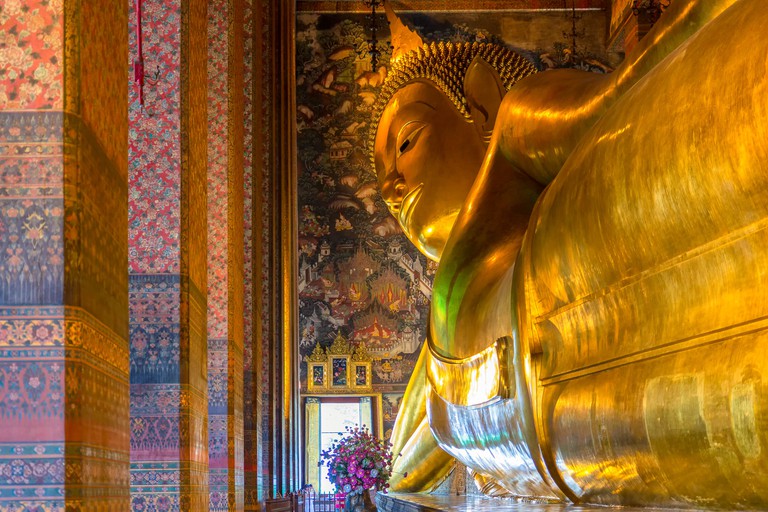 © Pakin Songmor / Getty Images
The oldest and largest temple in Bangkok, Wat Pho is, quite possibly, one of the most famous temples in all of Thailand. It is sometimes referred to as the Temple of the Reclining Buddha because of the 46m (151ft)-long, 15m (49ft)-high Buddha that sits at this temple’s core. It is located just south of the Royal Grand Palace, and you can spend an entire day exploring this ancient historical area. In addition to the giant Buddha, the temple grounds are decorated with beautiful treasures that are well worth exploring.
Open In Google Maps
Bangkok, Thailand
Give us feedback 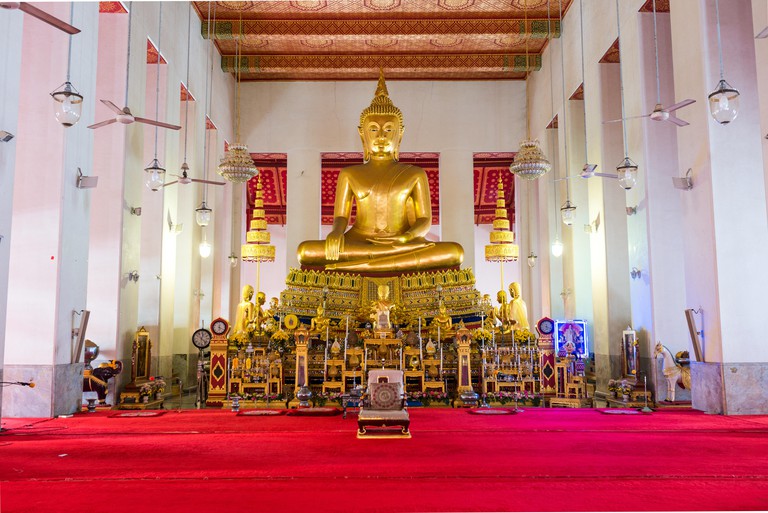 Wat Mahathat Yuwaratrangsarit is a temple, meditation centre and Buddhist university in one. Established during the Ayutthaya Kingdom, before Bangkok was declared the capital of the Siamese Kingdom, the temple is home to one of the oldest shrines in the capital – but that’s not the only thing that makes it special. The site is also said to be home to a relic of the Buddha. Travellers are welcome to stay in the temple grounds and learn the principles of Vipassana meditation, taught by monks from the Mahanikai School of Buddhism, one of the largest fraternities of Theravada Buddhism.

Open In Google Maps
Bangkok, Thailand
Give us feedback

Catch sunset views of Wat Arun, the Temple of Dawn 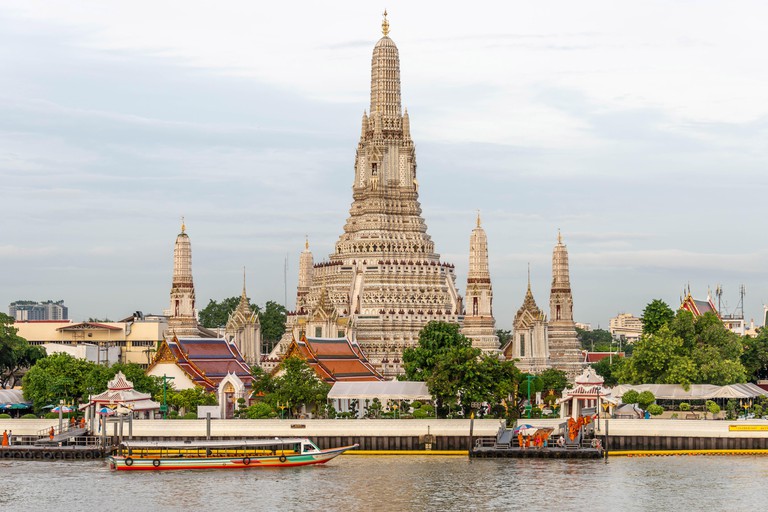 © Rex Wholster / Alamy Stock Photo
Before you set foot in Wat Arun, you’ll likely have seen the prangs (towers) of this temple featured on the 10 baht coin. The main prang is said to represent Mount Meru, a mythical peak in Buddhist iconography that represents the realms of enlightenment. Also known as the Temple of Dawn, it is said that the name was given by King Taksin when his royal fleet came upon the site during the sunrise. Counterintuitively perhaps, the temple is actually most beautiful at dusk. Spend the afternoon admiring the beautiful ceramic tiles and colourful pieces of porcelain, then head to the other side of Chao Phraya River to catch incredible sunset views.
Open In Google Maps
158 Thanon Wang Doem, Khwaeng Wat Arun, Khet Bangkok Yai Krung Thep Maha Nakhon, 10600, Thailand
+6628912185
Visit Website
Give us feedback

Climb atop Wat Saket for incredible views of Bangkok 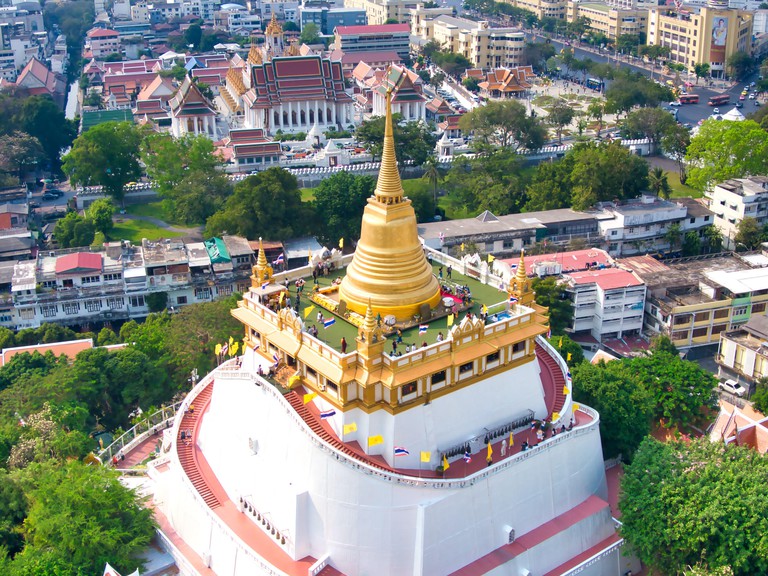 © Thailand Travel Photos / Alamy Stock Photo
Wat Saket is more famous for its golden chedi (stupa) than for the temple itself. The site is home to a chapel, a library and an ordination hall where you’ll find a number of Buddhist paintings, but its main draw is in the name. Otherwise known as the Temple of the Golden Mount, Wat Saket’s impressively large stupa is set atop an artificial hill that can be reached by climbing up 300 steps; it’s a pilgrimage that is best tackled early in the day or during the cooler months. The place of worship is busiest during Loy Krathong, a temple fair that takes place every year in November following a Buddha relic worshipping ceremony. Admission to the site and festival is free.
Open In Google Maps
Bangkok, Thailand
Give us feedback 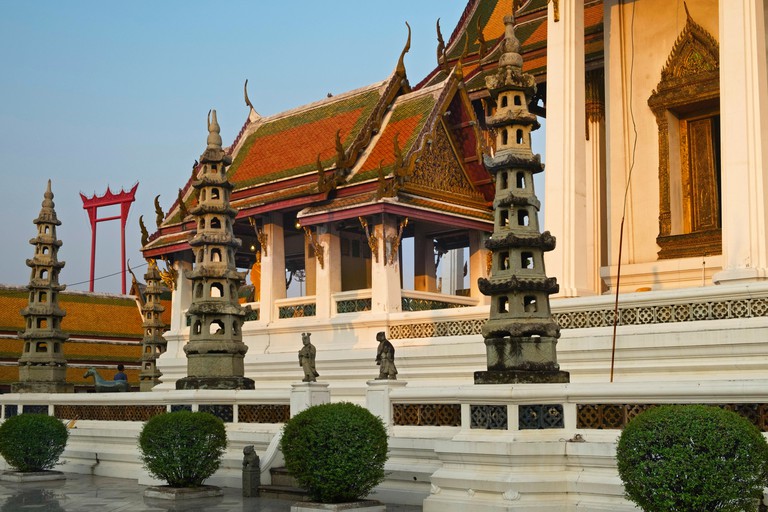 © Simon Reddy / Alamy Stock Photo
Book Now
Located among a cluster of temples on Rattanakosin Island, Wat Suthat is home to some of the richest Buddhist iconography in Bangkok. The main prayer hall is covered in frescoes depicting the 24 incarnations of the Buddha, but perhaps the main draw for many visitors is the Giant Swing, or Sao Ching-Cha. It dates back to 1784, when young men would swing dangerously high (24m (79ft) high in the air at full swing) in order to catch a bag of silver coins with their teeth as part of the Brahmin thanksgiving ceremony festivities.
Open In Google Maps
146 Thanon Bamrung Mueang, Khwaeng Wat Ratchabophit, Khet Phra Nakhon Krung Thep Maha Nakhon, 10200, Thailand
+6626222819
Visit Website
Give us feedback 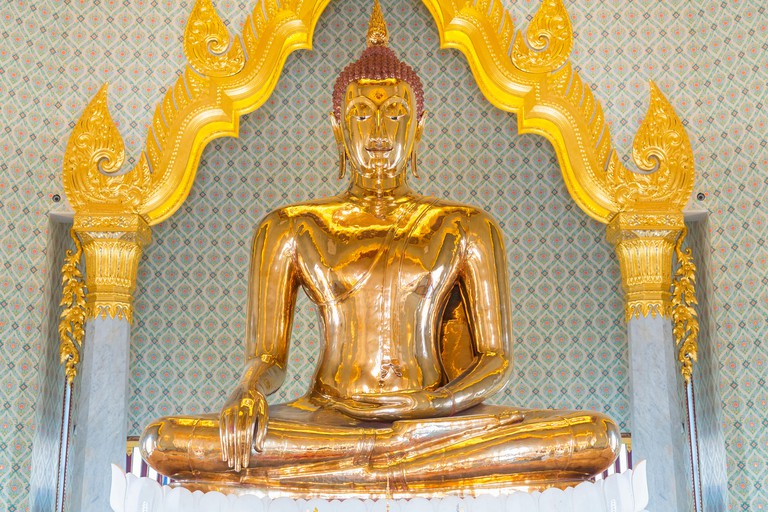 © John Kellerman / Alamy Stock Photo
Book Now
Located in Chinatown just at the start of Yaowarat Road is Wat Traimit. Until recently, the temple was relatively obscure, serving a familiar crowd of local worshippers. It was only during renovations in 1955 that the temple found its claim to fame. When movers accidentally dropped a facade of stucco and plaster, they uncovered a solid gold statue dating back to the 13th-to-14th centuries. Measuring 5m (16ft) in height and weighing 6 tonnes (6.6 tons), the discovery of this Buddha figure has since put Wat Traimit on the map. It is said that the current value of this statue is more than USD $250 million.
Open In Google Maps
661 Charoen Krung Road, Khwaeng Talat Noi, Khet Samphanthawong Krung Thep Maha Nakhon, 10100, Thailand
+66890022700
Visit Website
Give us feedback 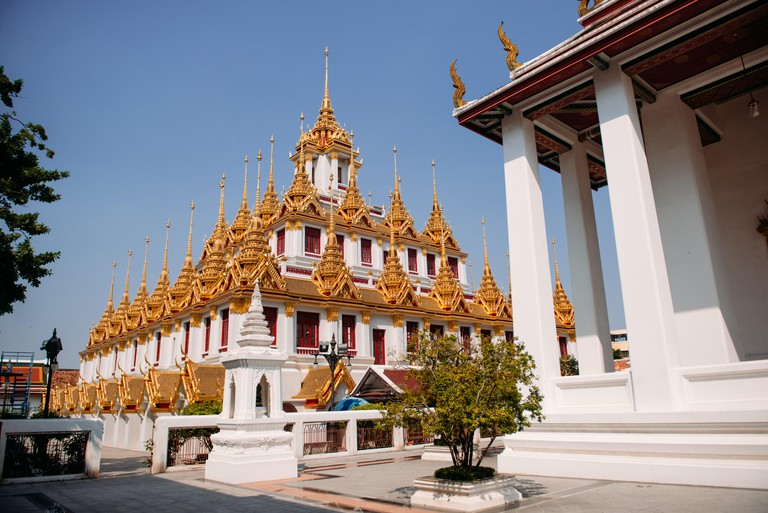 © RooM the Agency / Alamy Stock Photo
Wat Ratchanatdaram is one of the more architecturally distinct wats on this list. The temple grounds are comprised of white-coloured spirit homes and prayer halls with roofs made up of bronze tiles, but the site’s crowning glory is the Loha Prasat, the Iron Monastery. The 37 towering metal spires represent the 37 virtues of the path to enlightenment. Following in the style of Indian and Sri Lankan design, it is one of two temples in the world with this distinct pyramid pattern, where each concentric square level is built on geometrically positioned pillars. Admission is free.
Open In Google Maps
2 Thanon Ratchadamnoen Klang, Khwaeng Wat Bowon Niwet, Khet Phra Nakhon Krung Thep Maha Nakhon, 10200, Thailand
Give us feedback

This is an updated version of an article originally written by Kelly Iverson.