From Craft To High Tech: Top 10 Taiwanese Designers To Watch |

For decades, Taiwan has been an electronics design hub, making components for the biggest names in the world’s tech industries. Now, Taiwanese designers are making names for themselves as innovators in the spheres of product and industrial design. From catwalk fashion and artisan furniture to cutting edge eco-technologies, these ten product designers form the vanguard of Taiwan’s emerging creative force. 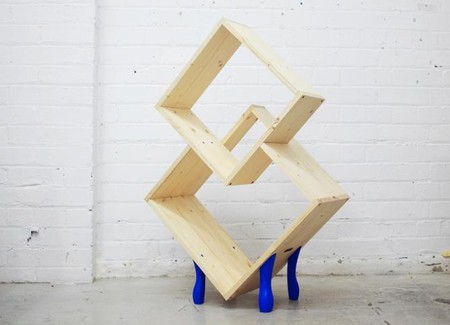 “Design,” says Kenyon Yeh, “is a process and a tool to deliver ideas.” From his Taipei studio, Yeh creates furniture and lighting that, although boiled down to the most minimalist forms possible, nonetheless convey Yeh’s ideas and aesthetic regarding modern urban living. His UNIKEA project is emblematic of his practice: In it, Yeh strove to forge unique identity from uniformity by assembling Ikea flatpack furniture without reference to the instructions, customising each component as he went along. Yeh’s interest in unique approaches and beautifully simple forms have seen him invited to work with the likes of TOPMAN UK and British designer Simon Hasan, as well as acting as brand director of Taiwanese make Esaila.

Jolin Wu’s CV reads like a who’s who of fashion luminaries: not only did the Taiwanese designer study at London’s Central St. Martin’s and the Royal College of Art, but she also went on to work as a freelance designer with the likes of Alexander McQueen and Julie Verhoeven. This experience surely stood Wu in good stead for establishing her own brand, which she did in 2008 back in Taipei. Focusing on womenswear, Wu largely reinvents the look of her collections each year, oscillating from dreamy romanticism to sport-luxe functionality; the common thread from collection to collection is her use of clever tailoring and elegant basic forms that speak to modern Taiwanese femininity.

She’s still under 30, but Su Jung-cheng already has an impressive collection of product designs to her name. A recent collection includes Su’s Nonsystem furniture range, a range of boxes and flat surfaces that can be clipped together in different ways to make different pieces of furniture, from stools to shelves. Her minimal yet multifunctional pieces work perfectly in the context of Taiwan’s crowded urban areas, where space is at a premium and inventive, adaptable furniture works better than traditional didactic design. 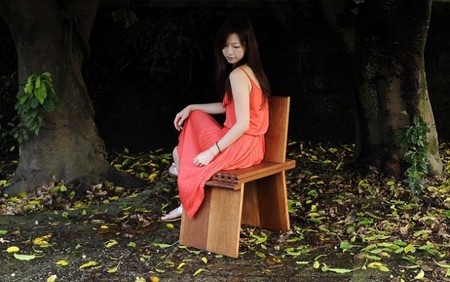 Elvis Chang describes the products made by his award-winning design company Homer Concept as “functional artworks,” and when you see his tactile, ergonomic yet organic pieces it’s hard not to agree. Specializing in multifunctional wooden furniture, Chang’s Homer Concept tackles issues of constricted living space head on, producing pieces that make the most of small living spaces while remaining aesthetically appealing. With a commitment to sustainability, Homer Concept has brought out pieces such as the Stack Stool, a wooden stool that also doubles as occasional table, desk and even stepladder. Thanks to this commitment to creating pieces that last a lifetime and address real life consumer needs, Chang’s design studio won the HKDA Asia Design Awards in 2009, and the Golden Pin Design Award (Best Design) in 2011, the longest running design award for products created in the Chinese-speaking world. 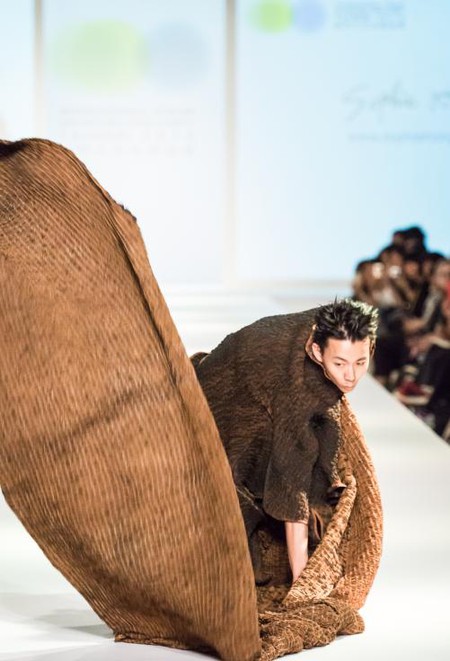 Hsinchu-born Sophie Hong is in some ways more like an artist than a fashion designer. Using traditional techniques to apply layers of paint to silk, she creates stiffly lacquered material that she then cuts and tailors into striking items of clothing. There’s an element of theater to her pieces, which often incorporate the flowing shapes and high collars of Chinese opera or dance, but Hong aims to always make the pieces wearable in a modern, international context. Whether experimenting with her recent menswear collection, designing stage costumes or expanding her womenswear range, Hong’s guiding mantra is to create clothes that are “beautiful, elegant, simple.” 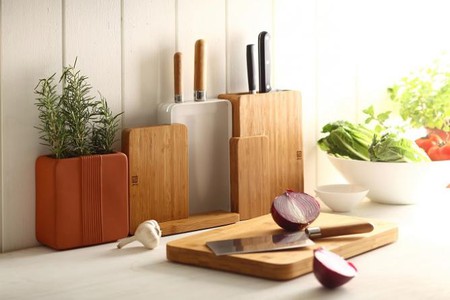 Design studio JIA Inc aims to make cooking and kitchen duties a pleasure rather than a chore through their innovative design of home wares. The studio collaborates with international designers to create products that fuse the best of both East and West. The result is products that capture the “calm and comfort” of home with the benefits of a globally networked design community. JIA’s recent collection of kitchen knives perfectly captures this aesthetic: incorporating the traditional Chinese cleaver, chef’s knife and paring knife, the set is made both from bamboo and acrylic, and the terracotta outer holder can also be used as a plant pot. JIA has won numerous distinctions for their subtle designs, including numerous Golden Pin Design Award ‘Design Marks’ over the last five years. 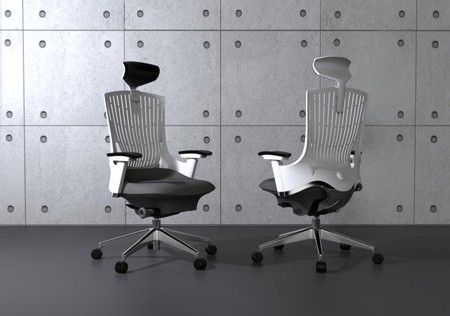 When Ader Chen founded Xcellent in 2001 his aim was simple — to offer “a better choice” of design. Xcellent’s lighting products certainly fit the bill, as the design studio has revolutionized the humble lamp. Using cutting edge LED technology Xcellent has produced award-winning lights like the Star Pendant, a futuristic modular design made up of ‘blades’ of light, which can stand alone or be fitted together to make unique light fixtures. But it’s not all hyper-technology — Chen also has a poetic side, as seen in his Flight Pendant Lamp, inspired by a flock of seagulls. A self-confessed bicycle obsessive, Chen’s love for deconstructing mechanical and re-making them in better ways is apparent in all of the products Xcellent releases. 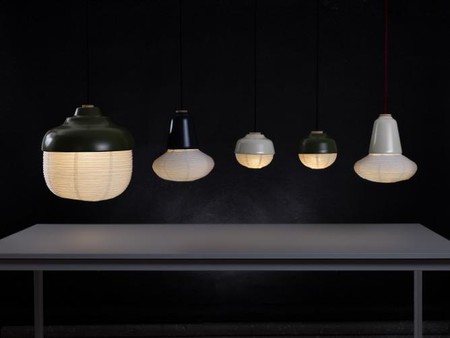 Design can change the world, according to Hsiaochun Shih, Tingwei Yeh and Yihsien Lin, the brains behind Kimu Design Studio. Starting from this position, the team aims to make products that connect with people in simple and natural ways. From stationery to homewares they combine traditional and modern, and East and West in surprising ways: the “new old light,” for example, combines a traditional Asian paper lantern that expands and contracts to create different intensities of illumination. Recently, Kimu claims to have found their most important design partner yet—nature. By re-imagining flowers and plants, the studio hopes to capture the interplay between man and the natural world in their lighting, for which they were recognized with a Golden Pin Design Award ‘Design Mark’ in 2014. 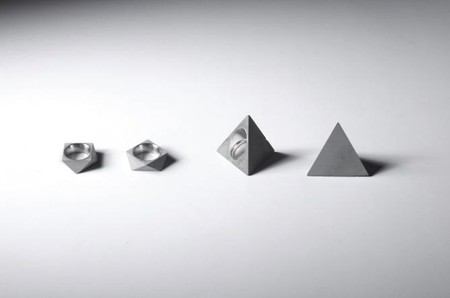 Concrete and steel are rarely materials associated with homeware or accessories, but at 22 Design Studio, husband-and-wife design team Sean Yu and Yiting Cheng take these uncompromising raw elements and repurpose them to create everything from jewelery to clocks and stationery. Inspired by the hypermodernity of Taipei, the duo tries to capture the strength and power of concrete and steel in their “resolute and uncompromising” products. Their concrete jewelery, fashioned by hand in Taipei, somehow combines elegance with a certain brutality, while their pens and automatic pencils could at first glance be mistaken for industrial tools — both products speak to a determination to find points of connection between humans and the modern urban space. 22 Design’s unique approach has seen them featured in magazines such as GQ and Wallpaper*, and won them a national Golden Pin Design Award ‘Design Mark’ in 2014.

Taiwan is perhaps the world’s technology hub, with international electronics and digital companies flocking to the island to design and manufacture products. Curvature Lab takes advantage of this tech-savvy atmosphere and combines it with traditional Taiwanese aesthetics to create everything from computer screens to tableware. The Lab has recently established their first brand, Woo Collective, in an effort to embody this ‘New Craft’ ideology. In creating their ‘Inheritance’ collection of containers, the designers worked within the parameters of traditional Taiwanese tin craft to create simple forms, then roughed up the products by burning incense onto the surface of the tin to create a golden flush.