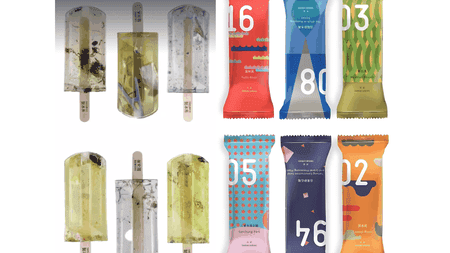 Trust us, no matter how hot and humid it is; you don’t want to eat these popsicles. Three Taiwanese students from National Taiwan University of the Arts have gone viral with their incredible (yet totally inedible) polluted popsicles.

What started as a graduation project has turned into an environmental crusade for Hong Yi-chen, Guo Yi-hui, and Zheng Yu-di. And with their Facebook page now boasting over 34,000 followers, it’s apparent that their project has hit a nerve.

Asked how the idea came about Hong said: “We had the idea because we believe that clean water resources are very important and that here in Taiwan and all over the world, pollution is a very serious issue.”

Taking water from 100 different polluted water sources around Taiwan, the three students set about creating their polluted popsicles. To say the results are an eye opener would be a huge understatement.

The popsicles are each unique in color as a result of industrial dyes and chemicals pumped into the island’s waterways on a daily basis. Many also include surprising little ‘treats’ within, such as dead fish, cigarette butts, bugs, dirt, and plastic trash such as wrappers and bottle tops.

Hong also said that they intentionally made the popsicles look appealing as this would garner more attention for the project. They felt that making a colorful and enticing wrapper for each popsicle would highlight the message that they were trying to get across. Although many of the world’s waters look clean at first glance, they often hide a grim truth; they are grossly polluted. 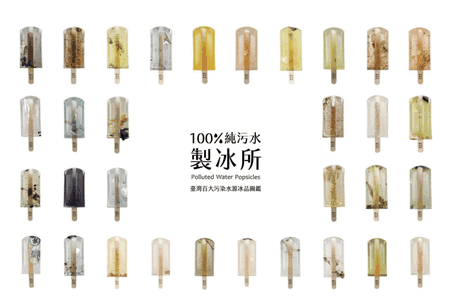 In designing the wrappers Hong, Guo, and Zheng showed their design-school pedigree, developing individual creations that would make any candy manufacturer proud. However, if you take a closer look, you’ll see that each wrapper displays the water source for that particular popsicle and the less than appetizing ingredients found within.

Of course, ice melts, so while the students made the original popsicles for their project in the traditional way using a mold and a freezer, they also made replicas they could take to exhibitions. These replicas are made using a resin that perfectly recreates the ice used in the originals, so they look exactly the same.

As a design project ‘100% Polluted Water Popsicles’ has brought the three students critical acclaim from designers and artists throughout the world. It also resulted in their project going on display at Taipei World Trade Center’s Young Designers Exhibition 2017 and brought them a nomination for the 2017 Young Pin Design Award, Taiwan’s most prestigious award for budding designers.

But it is as an exhibition highlighting the way corporations continuously abuse our environment that has seen the students become champions (and the darlings) of clean water activists throughout the world. While a seemingly quirky project done for fun, ‘100% Polluted Water Popsicles‘ opens the discussion on how we treat our natural resources. But more importantly, it brings the topic to the attention of the general public in a way that is both shocking and educational.