fRecently designated World Design Capital, Taipei is renowned for its art, design and culture scene. Nowhere is this more evident than in its many cultural hotels, which range from boutique to luxury, and which are often packed with incredible art, while exhibiting the best in cutting edge design. These 10 hotels offer far more than just a place to sleep, and embody Taipei’s cultural offering. 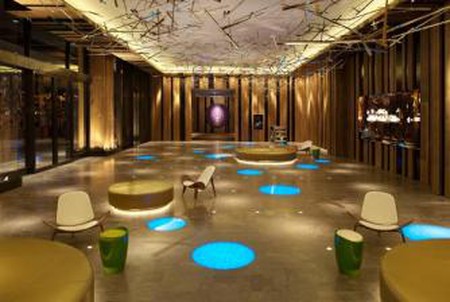 A self-proclaimed artistic icon in the heart of the Taiwanese capital, W Taipei infuses everything with a creative spirit. Their cutting edge design makes much of their hotel look like something from the distant future, with space age neon emblazoned throughout. The W follows a ‘Nature Electrified’ design narrative, the center point of which is a display of dancing lights which interacts with passers-by called ‘To Light You Fade’. This cutting edge design does not diminish the hospitality and comfort which the W offers, both of which are first rate. Each of the 405 rooms is adorned with the signature W bed, state-of-the-art entertainment, and the fabulous Munchie Box. The array of fine dining options within the hotel is also second to none, with high class Chinese cuisine at Yen Chinese Restaurant, international gourmet selections at The Kitchen Table and classy cocktails at WooBar. The mammoth swimming pool’s larger-than-life stainless steel water drop sculptures are also a sight to behold, as are the regular events which bring Taipei’s bold and beautiful to the hotel pool. 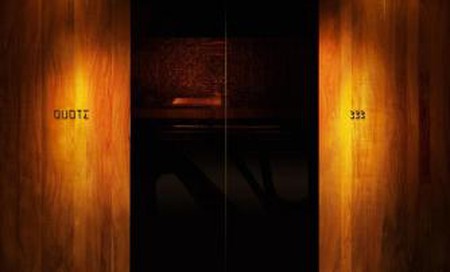 Combining the best of design and boutique, Hotel Quote offers a comprehensive cultural experience, while revealing the best of Taipei’s cutting edge modernity to guests. Minimalist interiors combine with retro furnishing, all the while embodying the hotel’s motto of ‘stay understated’. Hotel Quote’s location in the heart of Taipei City, just a short walk away from Taipei Arena, is conveniently located for all the cultural and tourism sites of Taipei. The 64 rooms are all designed to the highest standards, and combine modern amenities with contemporary style to lavish effect. The unique interiors of 333 Restaurant & Bar evoke the Moroccan Kasbah, and allow guests to enjoy an extensive food and drink menu in luxurious opulence, while the H.Q. Lounge evokes the comforts of home. 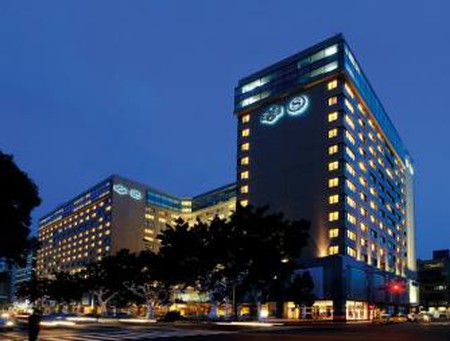 One of the most luxurious of Taipei’s hotels is also one of its most cultural, and boasts an amazing collection of art which would be the envy of any gallery. The Sheraton Grande Taipei houses an extensive array of Chinese treasures, from Qing era artefacts to Han dynasty tomb relics, all of which is on display in the hotel’s Art Promenade. Apart from this lavish art collection the hotel offers first class modern amenities, multiple fine dining options including regional Chinese, Thai, Japanese, Italian, and French and first class service and hospitality. 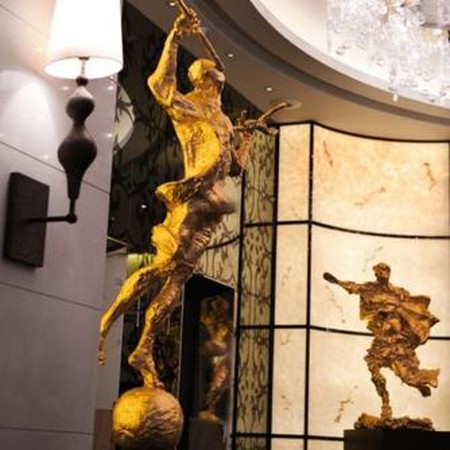 Part of the renowned Small Luxury Hotels of the World group, Hotel Éclat brings a touch of French elegance to Taipei’s fashionable Da-an District. The hotel’s collection of art rivals that of many galleries, with pieces from the likes of Salvador Dali, Andy Warhol, Yin Jun, Li Shan, Gao Xiao Wu on display throughout the public areas of the hotel. The highlight of this incredible collection is Dali’s golden sculptures Mercurio and Alma del Quijote, which tower over the hotel lobby. Offering boutique service, avant-garde design and modern amenities and facilities, Hotel Éclat proves that Taipei’s capital deserves to be known as one of the cultural capitals of East Asia. 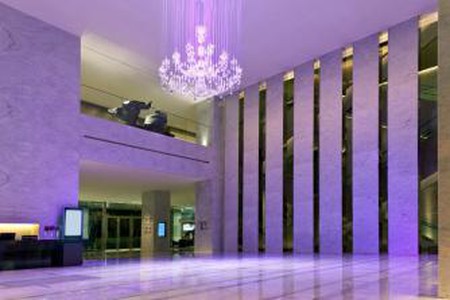 Another of Taipei’s hotel/art galleries, Le Méridien Taipei displays paintings by Yong-Liang Yang, Ju Ming sculptures and a mobile chandelier containing over 10,000 Swarovski crystals. The hotel also features its own gallery space in which a rotating selection of works is displayed. This artistic ethos is evident throughout the hotel, from its sleek modern rooms to its minimalist lobby. This infusion of artistic spirit comes about through the involvement of the LM100 group, which brings together creative individuals in a bid to turn Le Méridien Taipei into an arts and culture hub. 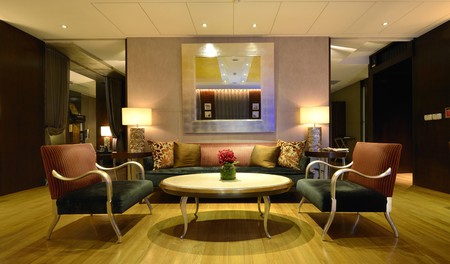 Spacious, trendy and evoking the best of boutique hotel style, Les Suites Taipei Da-an is a more intimate and charming option than some of the larger Taipei mega hotels. Located in the fashionable downtown district, the hotel is also perfect for guests looking to enjoy Taipei’s extensive cultural and nightlife scene, while enjoying the delights of the many shops, which line the Chung Hsiao and Dun Hua roads. With atmospheric wood panelling and simple Scandinavian style furnishings, Les Suites Taipei Da-an is an understated design classic. 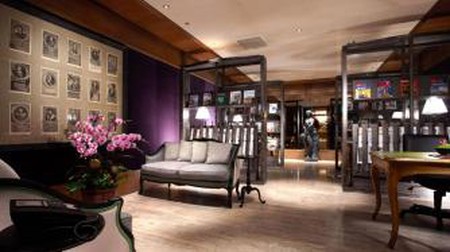 Located in the heart of the city, a stone’s throw away from the Q Square shopping center, Palais de Chine Hotel is one of the best boutique hotels in Taipei. Describing itself as a city center luxury hotel, the Palais de Chine Hotel exudes the best in design and contemporary furnishing throughout, as well as providing a range of modern amenities and first class customer service. With a several types of room to choose from, including Superior, Deluxe and Executive Deluxe, the hotel caters for a range of budgets and personal tastes. As part of the Splendia Hotel group, Palais de Chine Hotel maintains the reputation for luxury which that brand has become famous for.

Echoing the French regency style of Versailles, but in a distinctly Taiwanese setting, the King of France Palace Hotel is a beguiling but charming example of cultural exchange. With ornate gold furnishing and Renaissance style paintings throughout, the character of the King of France is unique. Several other themed rooms complete the surreal experience offered at the King of France, which also offers a range of facilities and cultural activities for its guests. 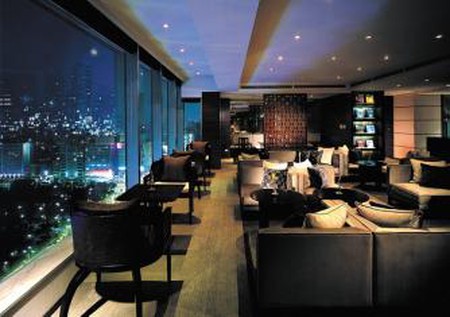 With 538 spacious and well-designed rooms, Regent Taipei is amongst the most renowned hotels in Taiwan. It features the Tai Pan Residence & Club, an all butler hotel that combines traditional Oriental features with contemporary comfort. It also hosts the Young Art Taipei Fair, which is the leading contemporary art fair in Asia. This brings a range of exciting and up and coming artists to the hotel every April, and consolidates its cultural credentials. 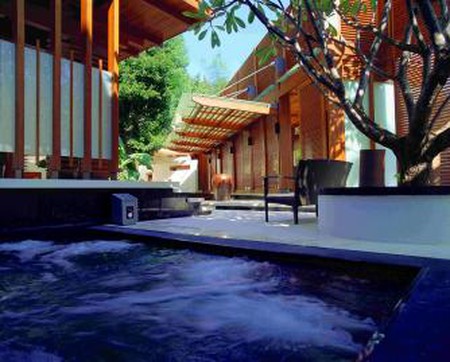 A luxury hotel, which is situated in the Beitou area of Taipei, Villa 32 is famous for its hot springs, and for the incredible wine collection of owner Ming-Houng Chiu. Set amid lush mountainous surroundings, the hotel is the perfect place to retreat from the hustle and bustle of Taipei. The design of the hotel is centered on serenity and art, and the water features which run throughout emphasize the hot spa location. The famous wine cellar also brings many wine connoisseurs and sommeliers to the hotel to view and taste some of its 30,000 bottles of vintage wine. The collection includes a Château d’Yquem 1865 from the collection of the Imperial Family of Russia and a Château Mouton Rothschild 1945, which is one of the most expensive in the world.