The Festival of the Tooth: a Unique Symbol of Sri Lanka 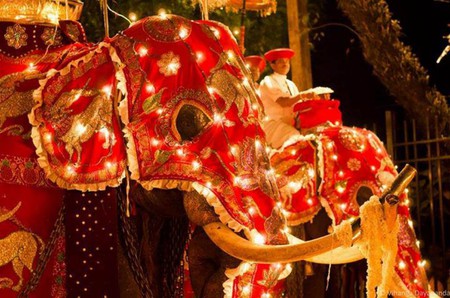 Ancient folklore and time-honed traditions are deeply rooted into the origins that signify this island’s culture and create its identity. One such tradition Sri Lankans hold in high regard is the Festival of the Tooth, also known as the Kandy Esala Perahera (procession); a historic ritual to pay homage to the sacred tooth relic of Lord Buddha—a festival of lights, unique customs, and heritage.

The festive preparation of the Kandy Esala Perahera | © wiki.commons

The journey of the relic to Sri Lanka is as interesting and colorful as the festal procession that commemorates it. Legend has it that when Lord Buddha was created in the 5th century B.C.E., one of his disciples took a tooth from the pyre. This consecrated vestige was then smuggled into the country by an Orissan princess under the guise of a Brahmin priest.

The Perahera dates back to the 3rd century B.C.E. and is a fusion of two peraheras, the Esala and Dalada. The Esala Perahera is associated with asking the gods for rainfall, and this practice still subsists in the main event where the order of the procession is still defined by the belief that the Sacred Tooth Relic has the magical power to produce rain. The Dalada Perahera can be traced back to the time it is believed that the Sacred Tooth Relic was brought to the island from India in the 4th century C.E., 800 years after the demise of the Lord Buddha.

The customs of the modern perahera can be attributed to the reign of the Kandyan King, Kirthi Sri Rajasinghe (1747-1781) who decreed that the relic be taken in a procession around the city to be seen and venerated by the masses. Prior to this, the sacred tooth relic was deemed to be the possession of the kings and the common people were not allowed to worship it.

The modern day procession starts off with a ceremony where a young jack tree is cut and planted at the premises of the four devalas (temples) or the four guardian gods: Natha, Vishnu, Katharagama, and the goddess Pattini. This public spectacle goes on for ten days, leading up to the full moon in August, and gathers a throng of both locals and global admirers alike. 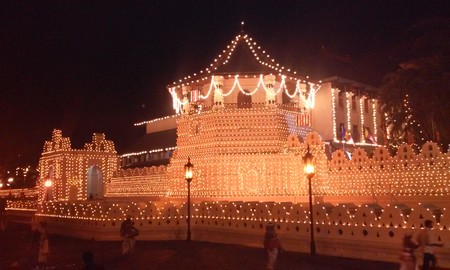 Sri Dalada Maligawa, The Temple of the Sacred Tooth Relic in Kandy | © wiki.commons

A replica of the tooth relic is kept in a casket inside the ransivige, attached to the Maligawa (temple) elephant. Later this Maligawa Perahera joins the waiting Devale Peraheras, and the blowing of the conch shell marks the start of the procession. Leading the procession on the first elephant is an official known as the Peramuna Rala, preceded by the whip crackers and the flag bearers. Following him are the drummers, dancers, musicians, flag bearers, and singers announcing the arrival of the Maligawa Elephant. They are followed by the Diyawadana Nilame, who in the days of old, were required to check everything to ensure that rains fell at the right time. Finally the four Devala processions follow. 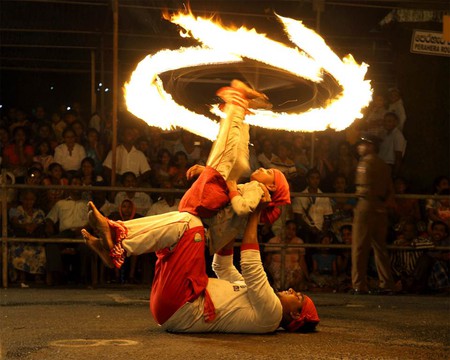 The fire dancers at the Esala Perahera. | © Amila Tennakoon - Flickr

The final stage of the procession is the Randoli perahera (palanquin procession), which is held five days after. At the end of this the relic comes to briefly rest at the Adahanamaluva Gedige Vihara of the Asgiriya monastery and the procession ends with the firing of the canon ball. On the following morning, preparations are already underway for the next year as a religious official draws a sword through the Mahaweli Ganga river at the peculiar water-cutting ceremony. This ritual is carried out with the belief of separating the pure from the impure and ensuring a plentiful supply of water. Some of this water is kept aside for the next opening ceremony when the jack fruit will be planted outside the temples.

Nothing stands more resplendent than the annual Kandy Esala Perahera in the religious, social, and traditional circles of the native islander. This pageant serves as a reminder of the glorious victory of the Devas over the Asuras on the day after the new moon in the month of Esala. Incepted as a festival of the gods, especially Maha Vishnu (the god of Sri Lanka), this festival has now been incorporated with the festival of the Tooth Relic. In the bygone days this tradition was carried out to seek blessings for the King and the people.

Bag a seat with a view OR arrive hours before the action begins OR reserve a place in one of the premises on the parade route.