13 Contemporary Artists in Sri Lanka You Should Know 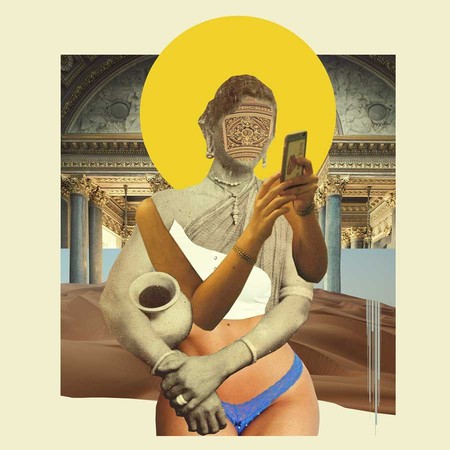 Most contemporary artist in Sri Lanka are children of the Civil War that raged on the island for 26 years. The horrors they lived through and the unforgettable experiences inspired their artwork at all levels. For the artists who were not on the island during the war, their inspiration is the aftermath and the rebuilding of society.

Contemporary artists in Sri Lanka have plenty of places to show their art. The Saskia Fernando Gallery and Art Space Sri Lanka are two of the most influential art platforms in the country. The artists represented by Art Space Sri Lanka can sell their artwork online to the rest of the world and have great coverage. The Saskia Fernando Gallery is the largest art gallery in Colombo and is always hosting contemporary artist shows. Their collection of artwork by contemporary artists is quite varied in style and media. If you are an art lover or collector, look no further. Here is a list of some of the most influential artists in Sri Lanka.

Jagath is one of the most influential contemporary artists in Sri Lanka. He is known for his influence in the ’90s Movement. The ’90s were a difficult time for Sri Lanka due to the conflict. As art is always influenced by life, so was Jagath Weerasinghe. He is the co-founder of the Theerta Collective and a key player in the Colombo Biennale. His artwork addresses moments of his life during the Sri Lankan Civil War as well as afterwards. Although known mainly for his black canvases that express his strong political views relating to the war, Weerasinghe recently began work on a series of drawings and poetry, exposing a much more subtle and romantic sensitivity than his earlier, more emotional and extreme work. 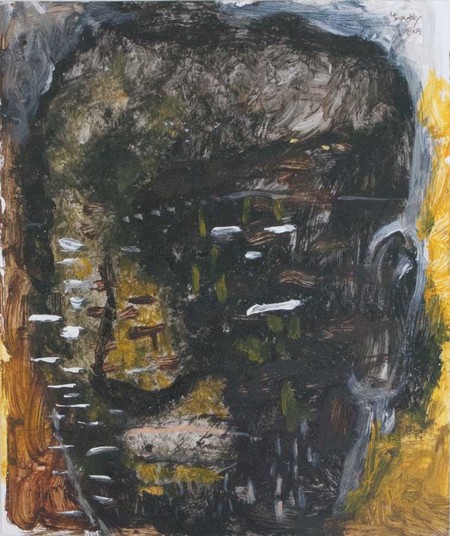 Thamotharampillai grew up in Jaffna in the north during the Sri Lankan Civil War. His work deals with the ideas of home, displacement, memory and loss. He creates art in many ways; documentation, memory recollection, stitched painted maps and intricate unconnected jigsaws. He has been involved in the creation of two book projects, one of which focuses entirely on his artistic translation of stories told by Sri Lankans who were displaced by the war.

Thamotharampillai’s most memorable series consists of composed jigsaw pieces of detailed imagery placed together on a stark white surface. These mismatched pieces represent memories that don’t quite fit together, but through their un-connection represent the stories of people who suffered with the war. The Mismatches exhibition was launched with with the book titled The Incomplete Thombu, in collaboration with curator Sharmini Pereira of Raking Leaves. 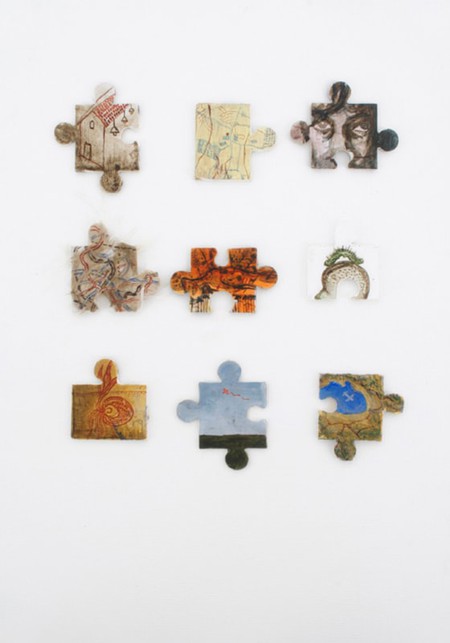 Chandraguptha Thenuwara studied Philosophy at the Institute of Archeology in the University of Kelaniya, Colombo. He also earned a Master of Fine Arts from the Moscow State Art Institute. He has dedicated all his work to expose political corruption in Sri Lanka. In the ’90s he created a series titled Barrelism representing the change in the city of Colombo during the war. He focused on the use of the barrel as an object for construction that later transformed into an object used for obstruction.

His pieces transform themselves to represent the current times using lots of symbolism. In his 2016 exhibition Glitch he presented a group of abstract paintings representing contemporary politics and society. They were like a group of glitches. 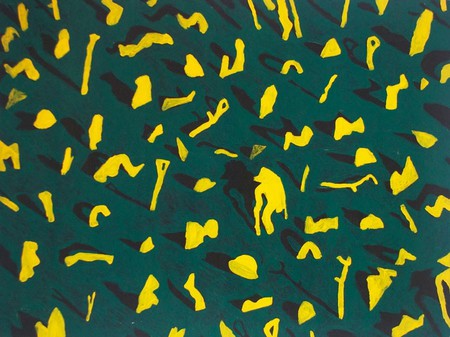 Kumari has a Master of Fine Arts from the University of Kelaniya, Colombo. She completed her studies at the Dutch Art Institute in the Netherlands, where she began exploring her experimental spirit as a female contemporary artist. In her early works, Kumari expresses her point of view as a woman in Sri Lanka. She focuses on her female identity in the contemporary art scene and society and bases her work on her experiences in a post-colonial country. In her most recent work, Kumari comes to terms with memories collected through history, tradition and the reality of daily life.

Her artistic work varies from techniques like digital photography collages to video installations to performance, but she is most recognized for her mixed media drawings. She follows a surrealist tradition to open her dreamy realistic imagination to the spectator.

In 2004 she presented a performance piece called Living Sculpture, in which she stood in a busy railroad station covered in colorful sarees. It was presented as a video in the show Between Kismet and Karma: South Asian Women Artists Respond to Conflict at the Leeds Art Gallery in the UK in 2010. 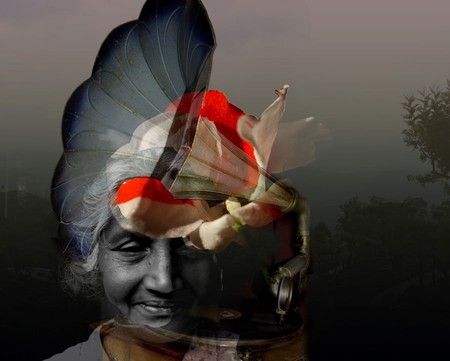 Udagedara has a PhD in Contemporary Fine Art Practice from the Leeds Metropolitan University, UK. From a distance, his paintings seem like a tropical image of nature. But when looked at closely, the subjects transforms into acollage of animal and human body parts interlaced with splattered paint. His watercolor hybrid creatures represent a mixture of beauty and agony, with monster and human forms in vivid detail and color.

His Herbal Garden series confronts the growing sex industry in Sri Lanka. The sex industry is largely ignored by traditional government organizations, who also turn a blind eye to the ever present issue of gender-based violence. Bits of paint splattered like blood suggests turmoil beneath what is, on the surface, a Buddhist culture. 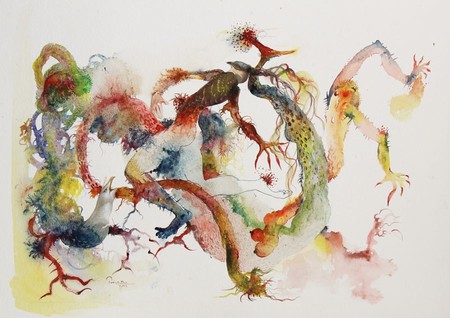 Prageeth graduated from the University of Visual and Perfoming Arts, Colombo, in 2009. He soon became one of the island’s strongest emerging artists. The majority of his work is influenced by the events that took place in July 1983, commonly known as “Black July.” This day marked the beginning of the Civil War that lasted 26 years. His 2016 series titled Since 1983 is a collection of buckets representing the way in which Tamils were detected. Attackers would ask suspects to say what the bucket was called; Tamils would say it one way and Sinhalese would say it another. The events of Black July are ever-present in Prageeth’s work, which is an ongoing search of memories and futures lost. 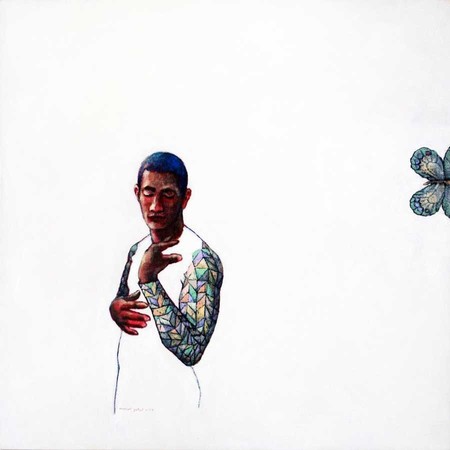 Manohansa has a Bachelor of Fine Arts from the University of Kelaniya in Colombo. Also trained as a landscape architect, Manohansa uses welding techniques to create sculptures out of recycled scrap metal and found objects. His conceptual sculptures are formed with minimal manipulation of its parts. Influences of traditional Sri Lankan culture are strongly evident in much of his early work, which focused on masks and deities. As a skilled draughtsman, Manohansa began to work on canvas and paper in 2010. His drawing work started with an exhibition of his blueprint drawings for sculpture commissions. His skilled linear drawings and heavy metal sculptures set Prageeth apart as one of Sri Lanka’s foremost painters and sculptors. 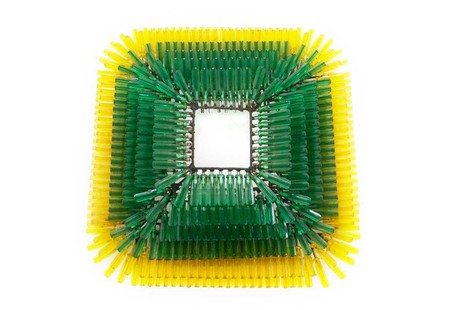 Binoy is a self-taught artist and independent filmmaker. As a digital artist, he works with different subjects related to Sri Lanka’s Generation Y. He observes his generation by exploring gender, agency and title along with the expectation of traditional values that are contradicted by the standards of the digital age. Binoy did not have any first-hand experience or suffer any after effects of the Sri Lankan Civil War, but he acts as an observer of the trauma that remains.

Binoy’s colorful collages represent popular culture in combination with nostalgic vintage photographs and paintings. The cutouts are highlighted and framed by pastel-colored geometric shapes. His preferred format is square, an indirect reference to Instagram. His colors and images signify the takeover of a global hipster trend, once an urban subculture and now a glossy reality.

Halik Azeez began his career as a strategy consultant and journalist, then worked as an independent researcher focusing on hate speech and critical discourse analysis. His photojournalistic journey began as part of his personal research, using social media as a platform to publish his work. Following an exhibition in 2014, he began to mix his work as researcher and artist, capturing images that documented the change in contemporary Sri Lanka. He focused on the social and cultural realities of minorities and urban residents of slum areas. The realities he discovered as a researcher became a direct influence on his art. He documented the lives of those experiencing the first-hand effects of urban development. From a personal viewpoint he explores the environment around him to create works that tell a story between the real and conceptual. 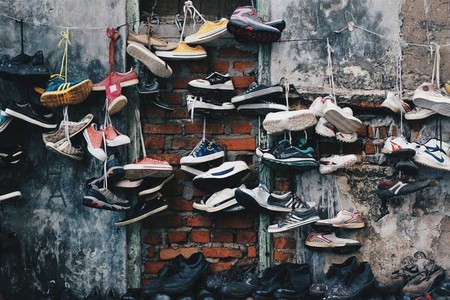 Pushpakanthan has a Bachelor of Fine Arts from the University of Jaffna. The mood in Pushpakanthan’s art is intentionally unsettling. His inspiration is the first-hand experiences he had during the Sri Lankan Civil War. By exploring unforgettable memories of death, disappearance, torture and wounds, the artist uses his work as a space to lay bare the painful realities of the past so that people can grieve and heal. Rather than searching for answers or solutions, he moves through changes in perception, hoping that the spectator will be able to empathize with the trauma and its meaning. 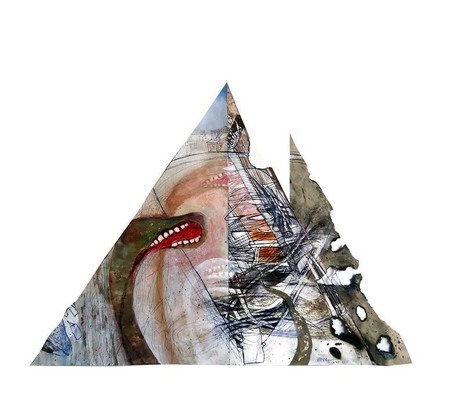 Nalaka is an emerging artist best known for his watercolor on paper works. Nalaka has participated in numerous shows in India since 2003. The artist is now back on the island after having completed his Masters in Fine Art at the Rabindra Bharati University in Kolkata, India. Of his time in India, Nalaka says, “This was an experience that was one of the most important for me to-date, moving from my native land to interact and understand modern Indian culture. Over the past decade I lived in an atmosphere where religion and culture differed greatly from Sri Lanka.” These cross-boundary experiences have had a profound impact on his recent work.

Nalaka’s series of monotone landscapes on canvas and rice paper depict typical scenes of the Central Province of the island combined with calligraphic poetry based on local fables. His works on paper, titled Inner Self, are inspired by gender and politics, often showing a woman or man’s torso painted from the back. Similar to his landscapes, he works on detailed imagery in the torso, playing with space and symbols by leaving the background completely bare. Nalaka uses traditional techniques of painting using symbols and script in combination with bold imagery on textured papers. 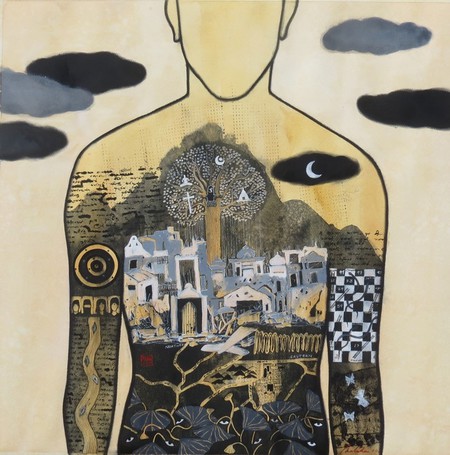 Somasunderam has a Bachelor of Fine Arts from The University of Jaffna. Her work explores the plight of the tea estate workers in Sri Lanka and the struggles they have faced for over 100 years. Her first-hand experiences are directly translated through objects typically used for tea making. She works on these objects as sculptural material illustrating stories through imagery of places, people and objects. Her distinctive series using strainers and stained tea bags juxtapose the strain of the people in her community and the stains marked on their lives. 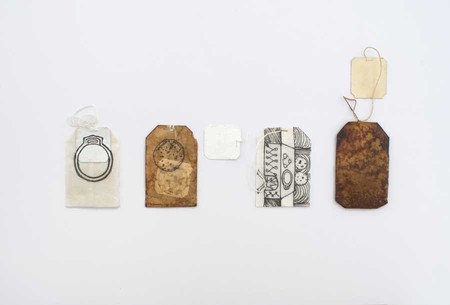 Geekiyange graduated from the University of Visual and Performing Arts with a major in Sculpture. He studied metal sculpturing and decided to take on copper as a medium. During his learning journey, he read piles of books related to science in order to educate himself about copper and how to create different colors on it surface. What makes his sculptures different to others is how he makes it a point to destroy them. After the destruction, he puts them back together, resembling a pencil sketch. 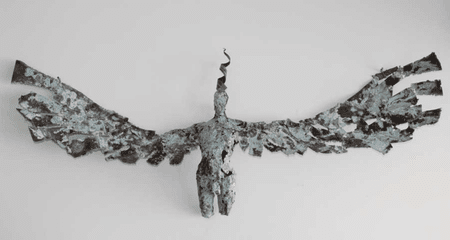