12 Dishes Everyone Should Try in Sri Lanka 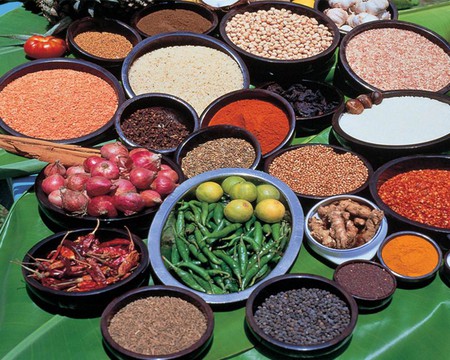 Sri Lanka’s incredible cuisine stems from a liberal use of locally-grown tropical fruit, access to fresh seafood and a coveted arsenal of spices. Many dishes can be traced back to colonisation when traditional foods were greatly influenced by external elements. But even those dishes that have foreign roots are prepared with a Sri Lankan twist to suit local tastes, and have therefore become exclusive dishes of the Lankans. Here are some dishes you shouldn’t miss on your voyage to Sri Lanka.

Ubiquitously found around the country, this dish is a local favourite among locals and tourists alike. From the smallest petti kades (small shops) on the side of the roads, to those winning five stars, the Kottu has found its way into gourmets’ culinary picks.

Kottu is a simple amalgam of godamba roti (Sri Lankan roti), an assortment of vegetables, and egg or meat. What makes kottu distinctive is the sound associated with making it. One cannot simply roam the streets of Sri Lanka without having heard the clash of metal against metal, an indication fresh kottu is being made. There are over 20 types of kottu that can be found in the city of Colombo alone – these include masala, cheese, dolphin, palandi, and even chocolate kottu! 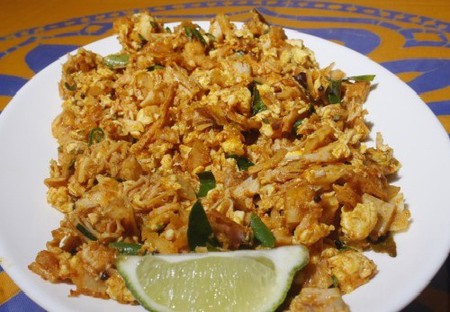 The not-so-ordinary pancake, made from fermented rice flour and coconut milk, is crisp on the outside and soft at the centre; it takes the shape of the circular, deep-mouthed tachchiya (hot pan) it is cooked in. Also known as the ‘hopper’ in Sri Lanka, this dish is indigenous to the Indian subcontinent and is prepared in multiple ways to create different variations. These vary from the plain hopper (appa), the egg hopper (biththara appa) which has an entire egg cooked within it, to its slightly sweeter variants – the milk hopper (kiri appa) and the pani appa (made using treacle). The hopper is ideally served alongside local side dishes like seeni sambol, dhal and lunu miris. 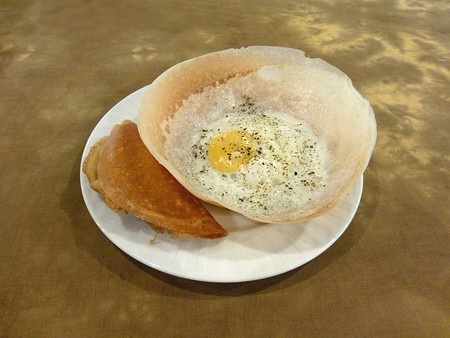 A crispy egg hopper sprinkled with salt and pepper ready to be devoured. | ©Wikimedia Commons

Being an island nation in the tropical waters of the Indian Ocean gives Sri Lankans access to readily available fresh seafood. There is no shortage of seafood dishes in the Lankan cuisine. One popular, must-try dish is the sour fish curry or malu ambul thiyal that is preferably made with fresh tuna, but bonito or mackerel could also be used as suitable alternatives. A load of native spices and a special ingredient – goraka (aka malabar tamarind) gives this dish its unique tangy flavour. Initially this hot, peppery dish was developed as a means to preserve fish in the south, but has now become a favourite picnic curry. It is often enjoyed in conjunction with either rice or pol roti (a flatbread made using coconut).

Another popular dish at gatherings is the lamprais. This is a dutch-burger influenced dish consists of the following: yellow rice, lampara curry, seeni sambol, fish cutlet, fried ash plantain curry, wambatu moju (eggplant) and fried boiled egg. The speciality of this dish lies in the fact it is cooked twice. First the rice and the entrees are cooked separately; the second time, the already-cooked constituents are wrapped in a banana leaf and baked in an oven to deliver a mouth-watering platter of lamprais.

One other dish that is an integral part of Sri Lankan cuisine is idiyappam (string hoppers). It is a light and easily digestible delicacy made of rice flour pressed into a noodle form and then steamed. This is a dish popular in south India and can be dated back to the first century AD. Idiyappam is generally served as a main course at breakfast or dinner together with curries. A simple yet coveted combination is with the ala hodi (potato curry), parippu (dhal) and spicy pol sambol (coconut sambol). In Sri Lanka, it is also sometimes consumed with coconut milk and sugar. 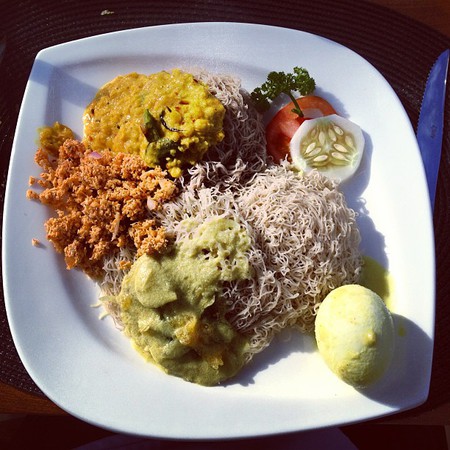 The parippu is one of the staple curries of Sri Lankan cooking. It is a curry dish made of mysore dhal (lentils) and gets its yellow colour from saffron. An excellent side dish that goes with anything – from rice, to roti, to string hoppers, to roast paan (bread that is roasted in an oven).

Yes it’s exactly what it sounds like – a steamed cylindrical serving of ground rice and/or coconut. Also commonly referred to as ‘puttu’ in south India, this peculiar rice dish can be served either alongside ghee and sugar, or with spicy gravies – especially paya or mutton curry. The Sri Lankan version of this dish is commonly prepared using wheat flour (mani pittu), while the other favourite choice is the pol pittu, made using coconut and served invitingly on a traditional banana leaf to add flavour. 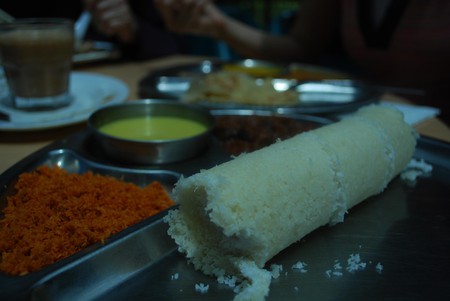 A favourite curry dish among locals and visitors is the polos curry – made from young jackfruit. The fact that this fruit is very hard to find outside Sri Lanka makes it a cherished dish for all. This seasonal tropical fruit is diced into bite-sized chunks and enhanced with a number of locally available spices including mustard seeds, turmeric, chilli powder, pandan leaves and curry leaf sprigs – another staple in the Lankan cooking. It has a unique starchy texture that is similar to that of cassava or potato and is a standard dish available at most restaurants.

The wambatu moju is a complex fusion of varied flavours. Prepared with the eggplant, this dish is bursting with flavour packed with several textures – a delightful pickle in your mouth. The bite-sized eggplant/ brinjal wedges are deep fried and then caramelized with a spoon of sugar, vinegar, red onions, green chilies, mustard seeds, chili powder and a hint of turmeric powder. While looks can be deceiving with this nearly blackened dish, the taste is an altogether different tale. It is ideally served with rice and curries. 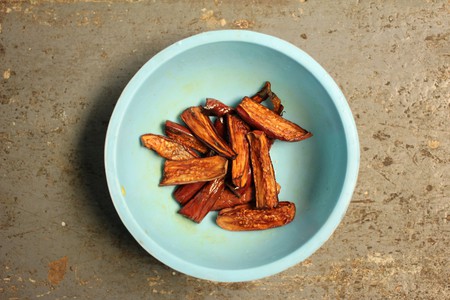 Sri Lankan achcharu is a quirky acquired taste of the locals. Basically any pickle that can be served as a relish or side dish to a main course is considered an achcharu. The achcharu enhances the flavour of any ordinary meal; it’s a punch of boldness – crunchy, spicy and full of zing. It also varies between every household. This tongue-tickling medley of vegetables and fruits is an all-time favourite at any meal. The mixed vegetable, ambarella, mango and pineapple achcharus are most people’s favourites. 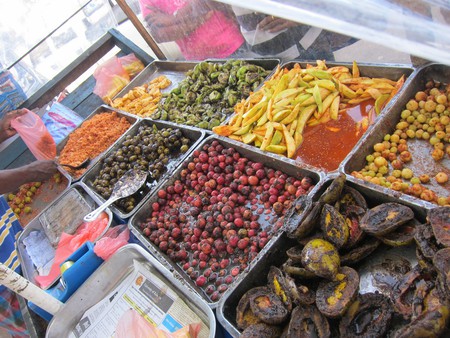 A roadside Achcharu Stand with all kinds of achcharu (pickled fruit). Most with chili - mango, pineapple and a whole bunch of local berries. | ©Indi Samarajiva - Flickr

Kiribath is a coconut milk rice dish that is served at most Sri Lankan festivities; it is perfectly complemented by the spicy, tangy taste of the lunu miris (onions ground with chili powder and lime). The rice is cooked in thick coconut milk and served as pieces. This is one traditional dish that should not be missed. 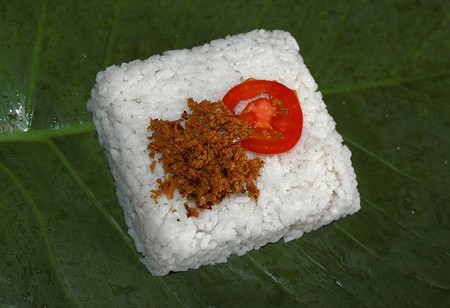 The spicy relish called the pol sambol is prepared with grated coconut, onions, red chilli powder, lemon, salt and Maldive fish. This dish is a household favourite and goes well with any main course. It is also a common accompaniment with idiyappam and appa. In fact if you’ve not had the pol sambol, you’ve not experienced Sri Lanka in its entirety yet! 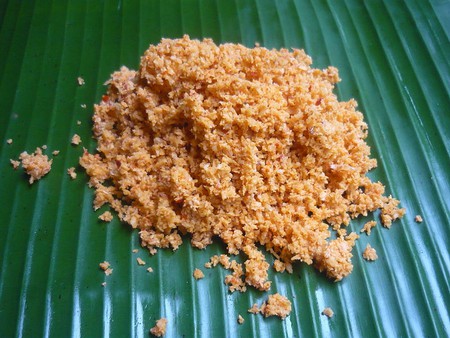