When Is the Best Time of Year to Visit Busan? 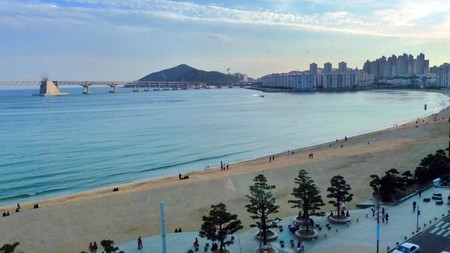 From hot summers at the beach to snowy winters, the coastal city of Busan has lots of seasonal variation. To make the most of your trip, preparation is key; here’s what you need to know for each month, plus the lowdown on festivals and events throughout the year.

January is the coldest month of the year in Busan, and the weather is dark, windy and occasionally snowy. This part of the year is generally quiet, and accommodation prices are lower than in other months. As with many cities around the world, the year begins with a celebration and a public holiday. The main event of January 1 is watching the first sunrise of the New Year, as it’s said that this will bring you luck for the upcoming 12 months. As part of the festivities, a sculpture representing that year (Year of the Dog, Tiger, Dragon…) is installed on the beach, where it remains for the next few weeks. Early January sees thousands of brave souls plunge into Haeundae’s icy waters for the annual Polar Bear Swim. 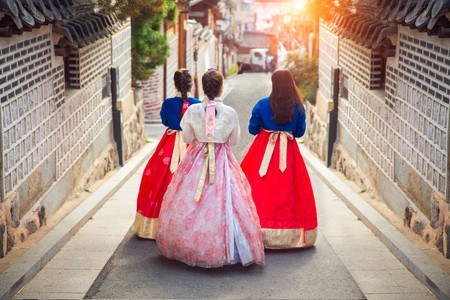 Although February’s average temperature is a little higher than January, it often feels colder due to the wind chill. If you’re travelling to Busan at this time, bring lots of layers. Seollal, or Korean New Year, is a traditional holiday held on the second new moon after the winter solstice, which normally falls in early February or the very end of January (usually the same day as Chinese New Year). It’s one of the biggest holidays in the Korean calendar, marked by spending time with relatives and performing ancestral rites. It’s therefore not the best time to visit, as transportation is busier and more expensive, and there aren’t many ways to get involved in celebrations as a tourist. The other major holiday in February is Valentine’s Day (Feb 14). Unlike in the West, Valentine’s Day in Korea sees women give gifts to men (usually chocolate) as a sign of affection. Men reciprocate on White Day (March 14).

March in Busan heralds the beginning of spring, and the weather gets better and better as the month goes on. It’s changeable through spring, though, so bring layers and ideally an umbrella – the weather can go from bright and sunny to cold and rainy very quickly. At the end of the month, spring flowers are beginning to bloom, and there’s lots more greenery around. Between the end of March to early April is one of the best times of year to visit, as it’s cherry blossom season. Cherry blossom season in Busan lasts for approximately 10 days, and you can keep an eye on weather forecasters for predictions on when it will be. 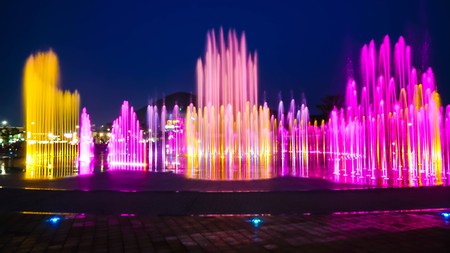 April in Busan is bright, sunny and warm (but not too hot), making it great weather for hiking around Busan’s many parks and hills, or exploring the city on foot. Busan’s beaches officially open at the end of April. Though swimming season doesn’t start until June, the beaches become busier, and events such as Daedepo Beach’s nightly fountain show begin. Now is a good time to come if you want to beat the summer crowds.

May is really the beginning of summer in Busan, and locals start heading to the beaches at weekends. The nightlife areas of Haeundae and Gwangalli begin to get busier, and the city’s festival calendar really gets into gear: at Haeundae Beach there’s the annual Sand Festival; Busan International Performing Arts Festival is held at venues around the city; and temples and Busan Citizens’ Park are illuminated with hundreds of lanterns to celebrate Buddha’s birthday at the Busan Lotus Lantern Festival. There’s also a public holiday in early May for Children’s Day, when you can expect zoos, amusement parks and cinemas to be thronged with families celebrating their little ones. 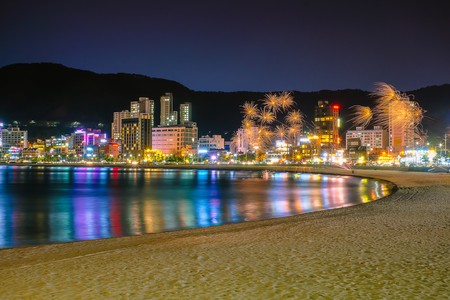 By the time June rolls around, Busan’s summer is in full swing. Its nightlife is lively, and you can expect to see lots of visitors from Korea and abroad. It’s not yet school summer holidays (mid-July to mid-August), which means that the city hasn’t quite reached its busiest peak. The weather is bright and warm, with lots of clear skies – if you visit at this time, remember to pack sunscreen and lightweight clothes. June 6 is Memorial Day, a public holiday that commemorates fallen servicemen and women. June sees swimming season start on Busan’s beaches (normally June 1).

Thanks to Busan’s coastal location, it doesn’t get as hot and humid as Seoul, but it can still be uncomfortably hot at the height of summer. July and August are the hottest months of the year, and also coincide with school holidays, meaning that the most popular beaches (Haeundae and Gwangalli) are thronged with people. Whilst the busy atmosphere can be quite fun, if you get tired of the crowds, you’d be better off heading to one of the city’s less central beaches such as Songjeong (good for surfing), Daedepo (one of the quietest, with lovely views), or Songdo (small and cosy, with cable cars and a skywalk). 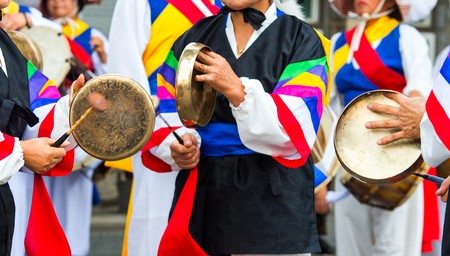 The beginning of August is much the same as July. School holidays end in mid-August, which is when the weather begins to cool and humidity decreases. A highlight of this month is the Busan Sea Festival, which is held at five of the city’s beaches (Haeundae, Gwangalli, Songdo, Songjeong and Daedepo), and includes musical performances, cultural events, traditional dances, family events and fireworks. It’s held over six days at the beginning of the month. Swimming season comes to a close at the end of August.

September’s weather remains warm, but come evening it’s much cooler. Chuseok, or Korea’s harvest festival, is normally held at the end of September – like Seollal, it’s tied to the lunar calendar, so its dates vary from year to year. (Chuseok is celebrated on the full moon that falls on the 15th day of the lunar calendar’s 8th month.) During Chuseok, South Koreans either travel to their hometowns to celebrate the festival with their families, or (more recently) use the time to take a holiday abroad. This means that travel is not only more expensive within South Korea, but flights into and out of Korea are more expensive at this time. If you have to travel during Chuseok, make sure you book tickets well in advance – many transport options sell out weeks (or in the case of flights, months) before the holiday. 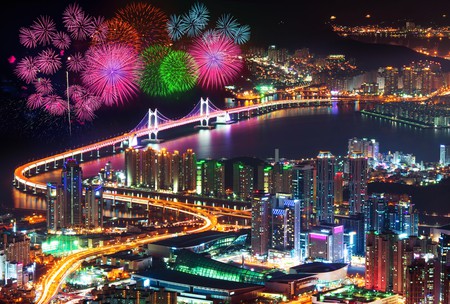 October’s weather is significantly cooler, but still very pleasant. Now is perfect weather for hiking, brisk coastal walks, or outdoor exploring, as it’s still bright and sunny but tempered with a cool breeze. This month sees cinephiles and celebrities descend on the city for the annual Busan International Film Festival (BIFF), held in the Busan Cinema Centre at Centum City, Haeundae. BIFF is Korea’s biggest film festival, and one of the most important events in the city’s international calendar. Busan Fireworks Festival follows shortly thereafter, with a spectacular pyrotechnics display at Gwangalli Beach. At the very end of the month is Halloween – although it’s not traditionally celebrated in Korea, the holiday has been taken up with enthusiasm in recent years, and you’ll find Halloween-themed parties and events galore at the bars and clubs in town.

November is the month where autumn foliage is out in full force. Now is a good time to visit temples such as Beomosa, as their thick surrounding woodland turns red and gold. The weather turns colder, and can be a little rainy; locals head inside at this time of year. If you’re heading to Busan during this month, consider exploring the city’s nightlife and live music scene. Fewer visitors head to the city at this time – so if the cold doesn’t put you off, you can often get better deals. 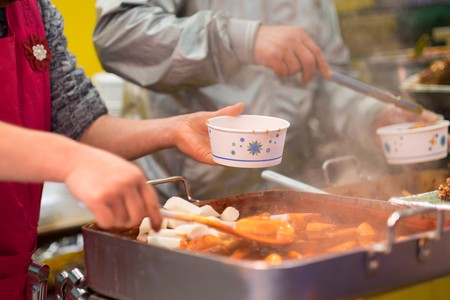 Many South Koreans don’t identify as part of any formal religion. Out of those who do, most are either Buddhist or Christian, and so Christmas is a public holiday in Busan. Throughout December, you can expect to hear carols, see Christmas trees and Christmas lights, and Korean workers are treated to company dinners. Despite the cold, this can be a lovely time to visit Busan. Locals warm up with steaming hot odeng or spicy tteokbokki at street food stalls all over the city. The festive feeling continues right up until December 31, when the city comes alive with parties and events to ring in the New Year.

When not to go to Busan

It’s best to avoid the two major holidays (Seollal and Chuseok) if possible, as transport and accommodation will be more expensive, and fewer people will be around. In terms of weather, the icy months of January and February are the least enjoyable, and outdoor activities are very limited at this time. If heat and humidity are your bugbears, you might also prefer to skip the peak of high season (mid-July to mid-August).