What Are Jeju Island's Dol Hareubang? 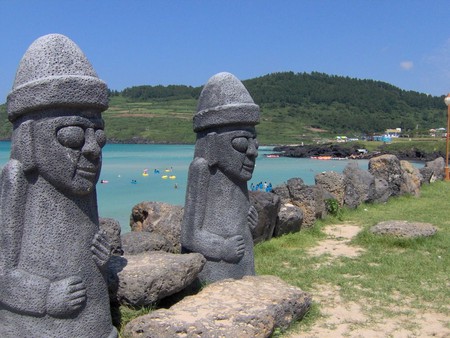 Jeju Island’s iconic stone sculptures, the Dol Hareubang, can be seen on tourist trinkets and goods all over South Korea. But what are they, and why were they built? Here’s a quick guide to the island’s most mysterious guardians.

What are the Dol Hareubang?

The Dol Hareubang are stone statues that can be found all around Jeju Island. Carved from the island’s porous volcanic rock, they stand up to three metres high. They’re easily recognisable thanks to their stylised shape: the sculptures all have bulging, pupil-less eyes on a grim or slightly smiling face, their hands rest atop their bellies, one slightly higher than the other, and all the sculptures wear mushroom-shaped hats that are often interpreted as phallic. Their origins are mysterious, but are often attributed to the island’s shamanic traditions.

How did they get their name?

Dol Hareubang literally means ‘grandfather made of stone’. The name derives from Jeju’s dialect — dol (돌) is ‘stone’ in Korean and hareubang (하르방) means ‘grandfather’ in the Jeju vernacular. The statues were given this name informally across the island for many years, but it was only as recently as 1971 that the Dol Hareubang were recognised as folk heritage and named officially. As well as their age, they may have been called ‘grandfather’ or ‘elder’ because of their imposing appearance — the statues are often considered to be guardians of the island, who ward off demons and evil spirits. 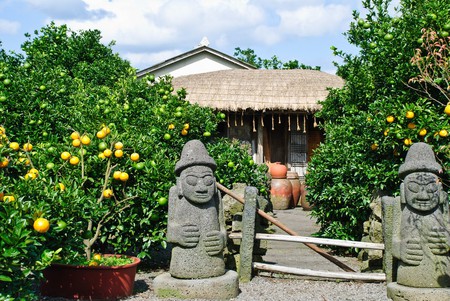 Where can you see them?

Dol Hareubang appear all over Jeju Island in many forms — from souvenir magnets to orange juice bottles in the shape of the statues. The original stone sculptures are easy to come across, and pop up in many tourist spots such as Cheonjiyeon Falls in Seogwipo, Hamdeok Beach in Jeju City, and Hyeopjae Beach on the island’s southwest side. There’s also a small park devoted to the Dol Hareubang, where you can learn more about their history and purpose, as well as see a variety of different statues gathered together.

What were the Dol Hareubang made for?

The origins of the Dol Hareubang are shrouded in mystery. Some say that the statues are analogous to totems found on the Korean mainland, and there is some evidence to suggest that the sculptures may have been influenced by visitors from overseas. The mushroom-shaped hats sported by the statues have led many to speculate that they were part of Jeju’s shamanic mushroom culture.

Today, the sculptures are commonly understood to have a dual role of protection and fertility. Many of the Dol Hareubang were originally set at fortress entrances, and this has led to them being seen as guardians of the island’s buildings and people. Jeju island is known as South Korea’s ‘honeymoon capital’, and this, coupled with the statues’ rather suggestive headwear, has led to a strong belief that the Dol Hareubang represent fertility gods. A legend says that newly married women can rub different parts of the statue to increase their chances of conceiving their desired child — the nose for a boy, the ears for a girl. Many of the statues have worn-down features as a result of this practice!